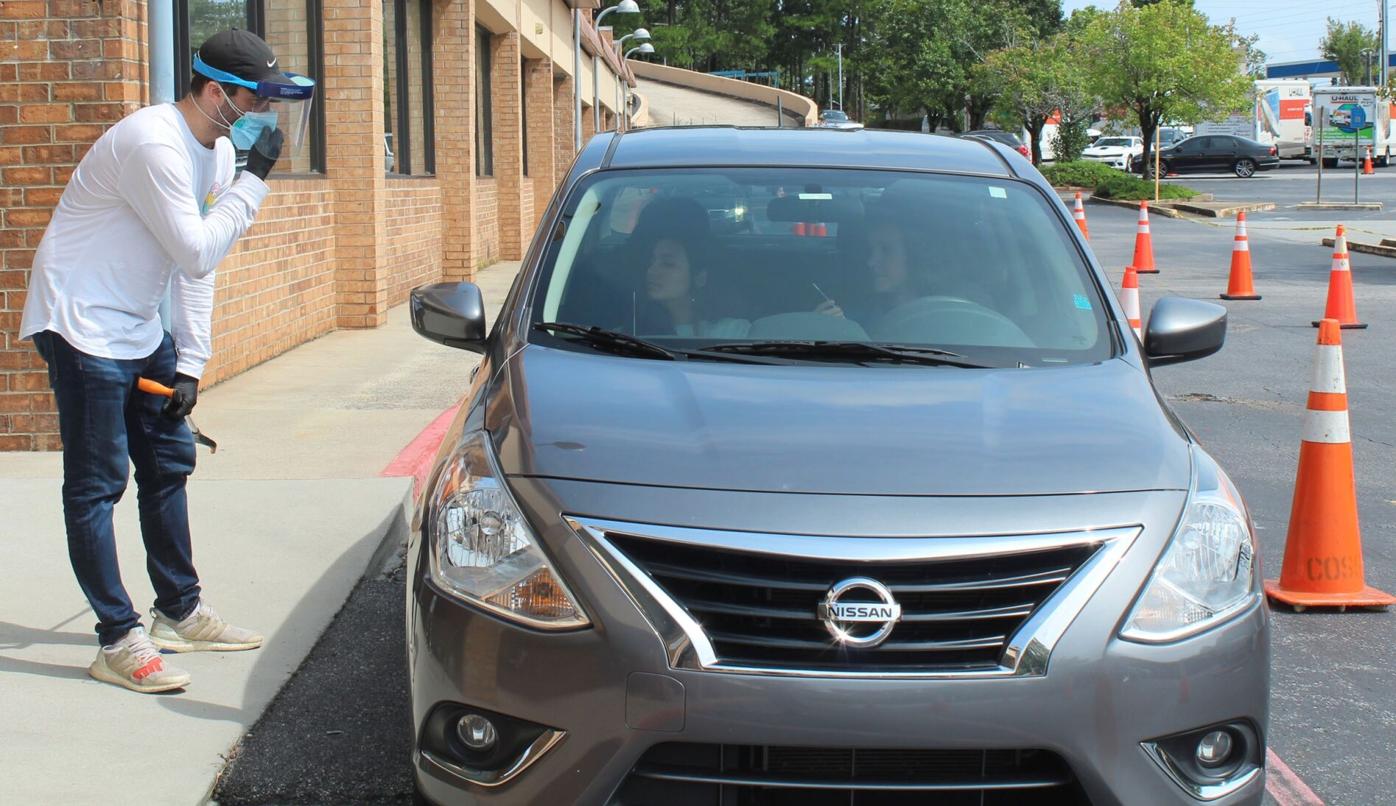 From left, CORE volunteer Zach Archbald explains to Salome Castro and her mother, Ada Duque, how to self-administer the COVID-19 test at the drive-thru testing site at the North Springs shopping center parking lot in Sandy Springs. 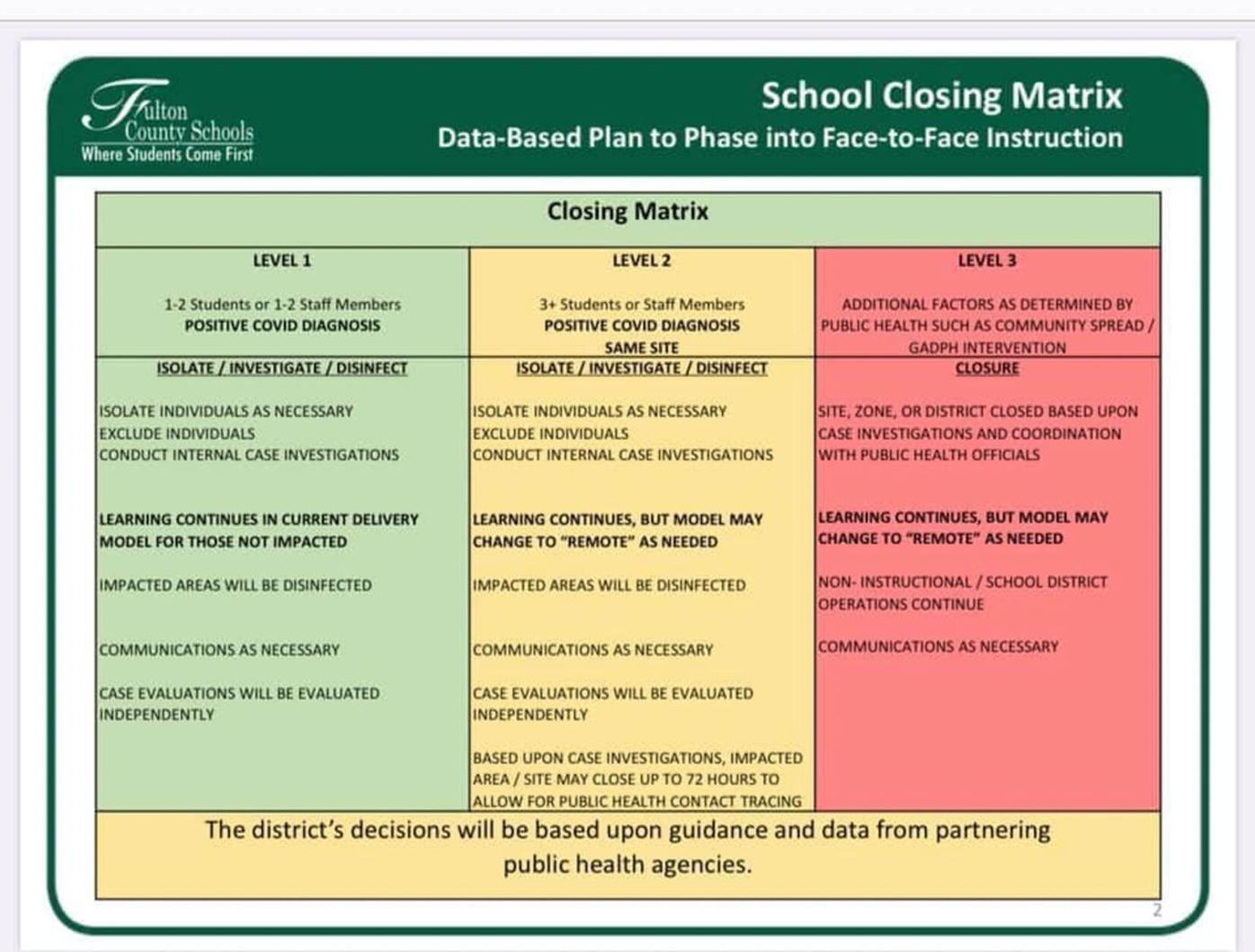 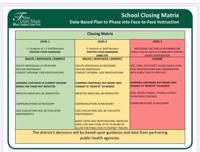 Fulton County Schools is using the above matrix to decide school closings.

From left, CORE volunteer Zach Archbald explains to Salome Castro and her mother, Ada Duque, how to self-administer the COVID-19 test at the drive-thru testing site at the North Springs shopping center parking lot in Sandy Springs.

Fulton County Schools is using the above matrix to decide school closings.

Fulton County Board of Education members are concerned about the changes the school district made in the data it uses to determine which schools should be closed based on COVID-19 student and employee positive cases.

“One of the things going around in the community and what they feel upset about is you have a closing matrix and more cases per 100,000 (residents), and the community is saying you’re not following the closing matrix. So, I think you need to say how you’re handling things,” District 4 member Linda Bryant told Superintendent Mike Looney.

Bryant spoke at the board’s Nov. 19 meeting at the South Learning Center in Union City. Looney countered by saying the data connected to the district’s closing matrix, a three-level guide on how it determines when a school, set of schools or all district schools should be closed due to positive cases, has changed.

“We have altered and adjusted our closing matrix to now only automatically close schools after consultation with the Fulton County Board of Health and other health officials when we come to an agreement that it’s best to close a school,” he said. “That’s Level 3.

“More often than not, we find ourselves in Level 1 or 2 and are able to work with the Fulton County Board of Health to work with staff who contract COVID and have them quarantine and we clean the school and contact trace regarding their case. … There is no exact number that causes a closure of a school. It’s based on the situation and circumstances of a school.”

Later District 1 member Katha Stuart said she was also concerned about the confusion over the closing matrix, especially since the district is using data that’s updated each Monday and Thursday and only includes the statistics from the previous three to four days instead of an entire week.

In response, Looney said, “That is a change. Prior to going to the two-days-a week reporting, we were using a rolling 14-day average. Because we’ve moved to the twice-a-week reporting, we’re only using the most recent reporting.”

Later, he added confusion remains when it comes to the closing matrix.

“When the district first closed our schools, we developed our closing matrix based on info we received in March,” Looney said. “Since that time, in the spring and summer, we revised our reopening and closing matrix and no longer use it based on the community spread.

“It considers the cases in schools and whether or not the Fulton County Board of Health or the Georgia Department of Public Health are in collaboration with us to close schools. To date, not a single healthcare agency has recommended we close schools. They have recommended us close schools for 24 to 48 hours for contact tracing but not because of the community spread.”

When asked by District 5 board member Linda McCain about confusion over why students taking online classes would be counted as part of the district’s on-campus COVID cases or quarantined students if they tested positive for or were exposed to the virus, Looney said some of them would be if they played sports for Fulton teams.

Looney said the district closed at least two schools in the past week because of “the level of infections is growing and (also) the number of quarantines is presenting operational challenges with staffing not being adequate.”

In an email after the meeting, District spokesman Brian Noyes said 10 schools have temporarily closed since October due to COVID cases: Banneker, Cambridge (twice), Centennial, Milton and North Springs high; Haynes Bridge Middle and Hembree Springs, Heritage and Liberty Point and S.L. Lewis elementary. Noyes said and closure “time periods varied from one day to one week, with most being 72 hours.”

Since the district returned to in-person classes in a phased approach starting Sept. 8, 44 students and staff combined reported testing positive for COVID-19, and 510 students and employees total have been in quarantine after being identified as a high risk for exposure for 15 minutes or more with individuals who tested positive, Looney said.

He put to rest any rumors that the district planned to close all schools after Thanksgiving and shift back to virtual instruction until January.

However, the superintendent did announce the district is partnering with CORE (Community Organized Relief Effort), which will provide free popup mobile testing sites Nov. 29 from 10 a.m. to 4 p.m. at the South Learning Center and North Learning Center in Sandy Springs for any students or employees that may feel they contracted the virus over the holiday weekend. Preregistration is recommended, and for more information or to preregister, visit https://covid19.dph.ga.gov/en-US/.

Looney said four types of individuals should get tested on that day: “anyone who has traveled out of state or out of country, anybody who has participated in large gatherings, and anybody who suspects they have even exposed to someone positive with COVID-19 or anyone who has COVID- or flu-like symptoms.”

As a way to keep students and staff at home while they await their test results, which could take up to 48 hours, Nov. 30 and Dec. 1 will be virtual instruction days throughout the district, with both students and teachers participating from home.

Also, district Chief Academic Officer Cliff Jones said Fulton is asking parents to fill out a second semester commitment survey to determine if they want their children to take in-person or online classes for nine weeks, with the deadline Dec. 11. Students whose parents don’t fill out the survey will be defaulted to whatever type of instruction they had during the first semester.

Each school is expected to respond to parents’ survey results between Dec. 14 and 18, and Jones said some students may not keep their same teachers for the second semester.

Finally, the board voted 7-0 to approve adding $600,000 to the fiscal 2021 budget to pay for increased funds for substitute teachers as a way to attract more of them to work on campuses during the pandemic.

According to a document posted to the district’s website, due to the outbreak, on top of regular absences, teacher absences have increased by about six to seven in most of its schools, causing a higher demand for substitute teachers. Because many substitutes, especially the retired and older ones, are not willing to work because of COVID-19 worries, which is a national problem.

So, the district is doing the following to address the issue: establish a temporary emergency substitute daily rate incentive, which ends May 31; if it occurs, pay a quarantined substitute a $75 daily flat rate during the quarantine period; increase the max number of substitute workdays from 17 to 20; increase the advertisements for substitutes on metro Atlanta radio, signage and social media; and consider a third-party vendor as another source for substitutes.

“Teacher staffing has been an issue because when teachers are out (with COVID issues), subs are not coming in due to fears of contracting the virus,” district Chief Talent Officer Ron Wade said.

Fulton’s graduation rate drops 2.7% but is still above the state average

Fulton County Schools’ 2020 high school graduation rate decreased slightly from last year, but its percentage is still higher than the state a…

Westlake High mourning loss of principal and his wife

Westlake High School and the surrounding community are mourning the loss of its principal and his wife, who both died in a drowning incident w…

Standard Journal Area Calendar of Events from the Wednesday, May 12, 2021 edition