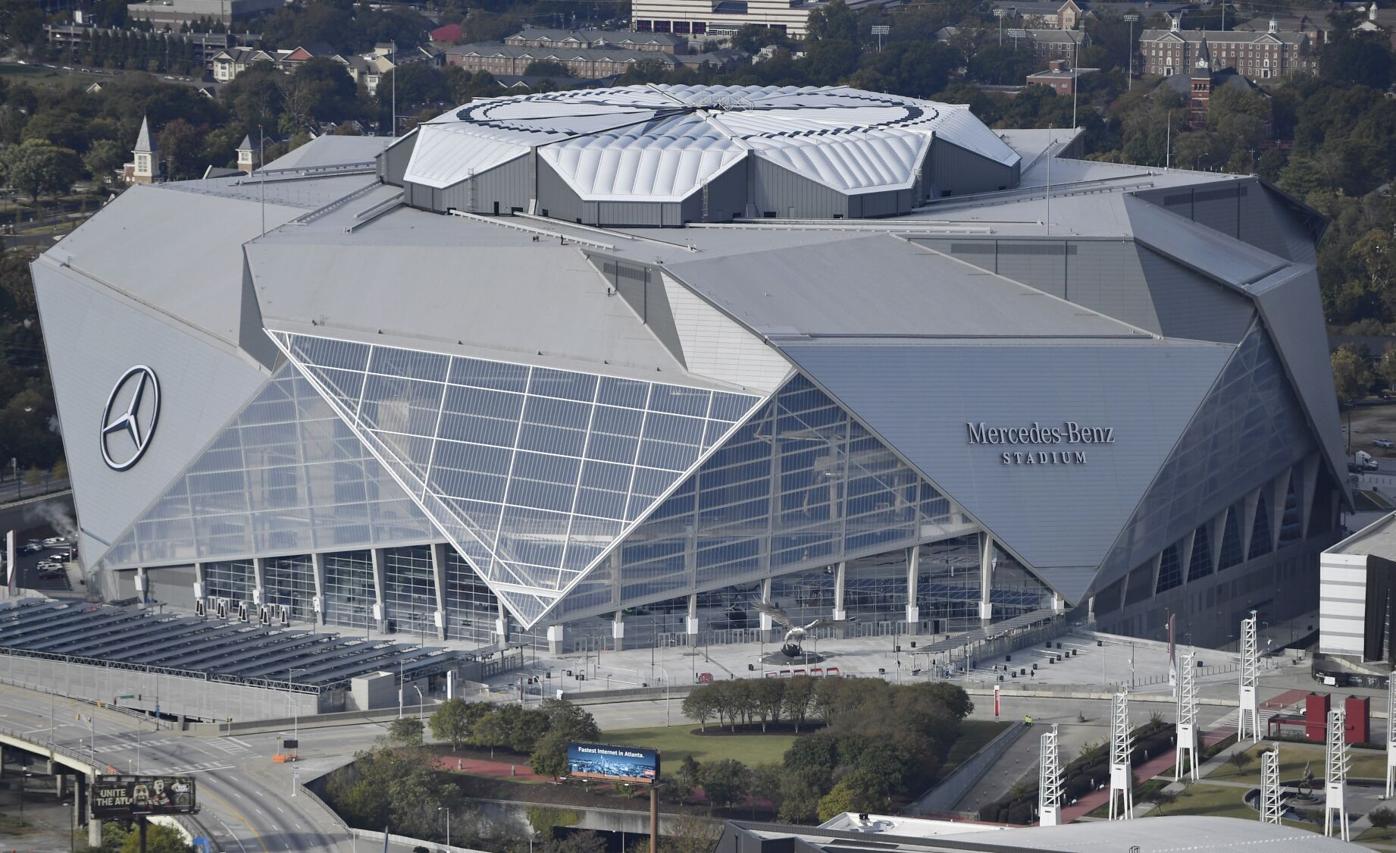 This Nov. 1, 2017, file photo shows the Mercedes-Benz stadium in Atlanta. Fulton County voters will have an opportunity to vote at the stadium in early voting for the January runoff election. 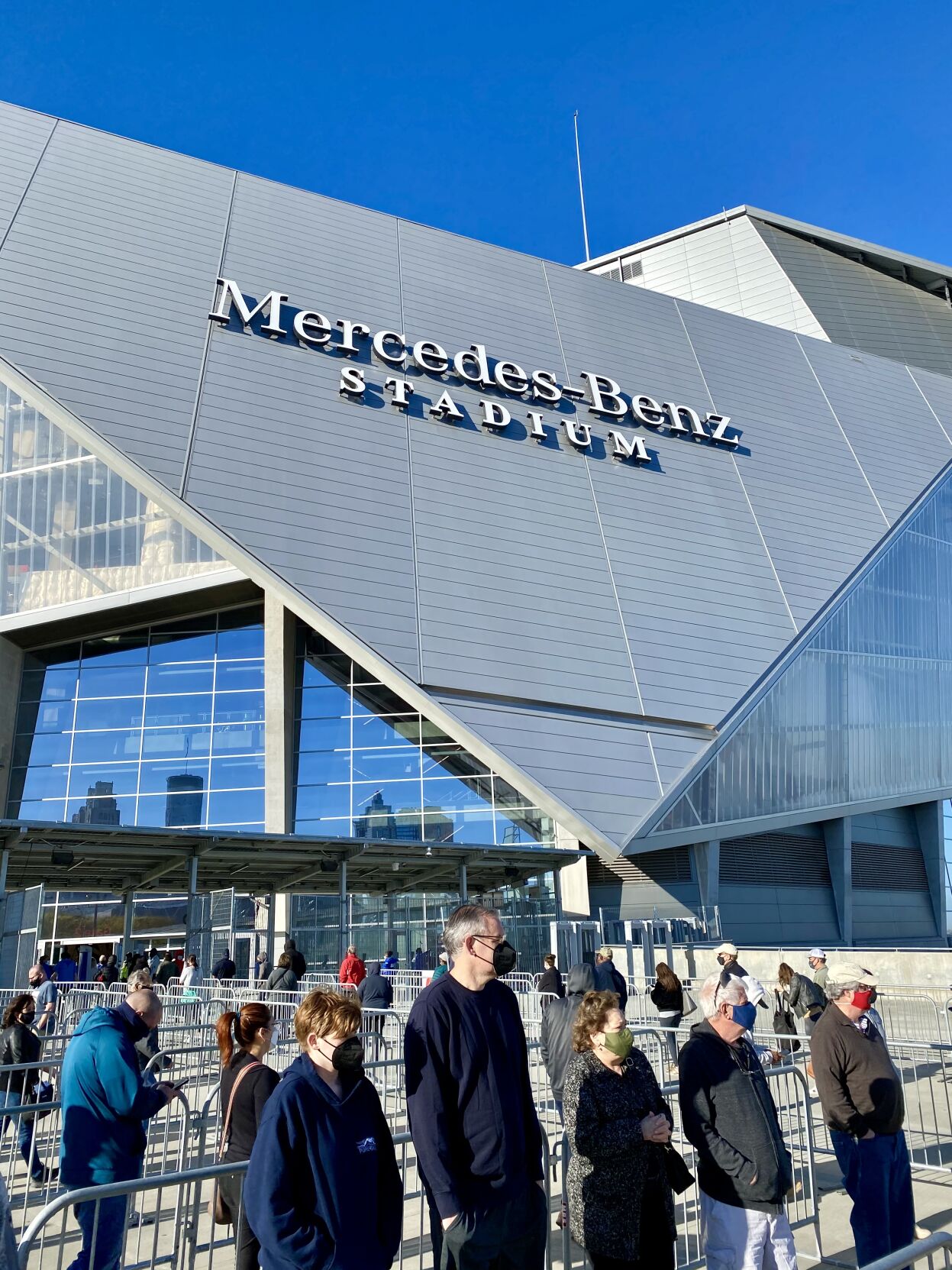 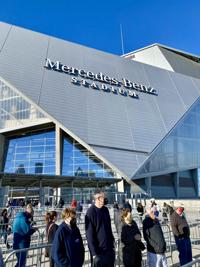 This Nov. 1, 2017, file photo shows the Mercedes-Benz stadium in Atlanta. Fulton County voters will have an opportunity to vote at the stadium in early voting for the January runoff election.

Eight days after starting the program, Fulton County has seen some success with its no-appointment COVID-19 vaccination days at its Mercedes-Benz Stadium mega-site in downtown Atlanta.

“As of April 19, about 7,500 walkups (have come) in one week without an appointment,” said Matt Kallmyer, director of the Atlanta-Fulton County Emergency Management Agency, referring to the initiative that began April 13. “… The highest single-day walkup total was 1,946.”

Kallmyer provided an update on the county’s vaccination efforts at the Fulton Board of Commissioners’ April 21 recess meeting, which was held virtually due to the coronavirus pandemic. With vaccine demand increasing after Gov. Brian Kemp allowed all Georgians 16 and older to get the vaccine starting March 25, the county opted for the no-appointment days to help those having problems signing up for the vaccine online or others who may not have access to a computer or smart phone.

“The one thing about this site is removing barriers,” Kallmyer said.

Since around Jan. 1 the venue has served as a county vaccine location, but its partnership with the Federal Emergency Management Agency (FEMA) allowed it to expand its efforts beginning March 25, including a record 14,000 doses April 8.

But an AJC article stemming from the April 14 meeting about confusion over how the stadium would be reimbursed for hosting the vaccine site had some county officials concerned. Fulton is planning to reimburse the stadium for $11 million in costs to host and staff the site. It’s part of $55 million the county is spending on both COVID-19 testing and vaccine sites and other pandemic relief actions, which the federal government will reimburse it for.

“I don’t recall any discussions ever about (stadium-related) reimbursements,” Fulton Chair Robb Pitts said at the April 14 meeting.

In response, County Manager Dick Anderson said, “It didn’t happen up front but it evolved over time.”

At the April 21 meeting, Pitts said he spoke to Steve Cannon, CEO of AMB Sports and Entertainment, the parent company for the Atlanta Falcons and Atlanta United, about the article.

“With respect to the $11 million, after talking with Mr. Cannon, there was a clear line in the sand where we were working at no cost to … (the stadium),” Pitts said. “But when the site was declared a super site by FEMA, that’s where I believe these charges came in. I think we’re going to be able to work through and come up with something that’s objective and fair to all parties.

“But it’s very clear that early on these partnerships are very important, with State Farm Arena and transitioning from elections to testing to vaccinations with Mercedes-Benz (Stadium), the Falcons and the United.”

Anderson added, “We were very clear and that was as we began our operations, we were handling these costs without a lot of oversight, without a lot of concern, because they were small and insignificant. … Then the costs do go up when it becomes a FEMA site. The other key was $55 million in FEMA reimbursement and (the county was) surprised $11 million would be allocated out of that.

“The appropriate wording would be $11 million along with other costs, are all reimbursable by FEMA. Those costs add up to $55 million. I think it was just a simplification of something that was a complex problem. We want to bring to bear all these funding sources.”

Once FEMA’s role in the stadium site ends in May, Fulton plans to use $11 million in federal COVID-19 relief funds to keep FEMA there until September or possibly earlier, when the venue starts hosting events such as Falcons games and concerts again.

For more information on the county’s no-appointment vaccination days or to schedule an appointment on another day, visit https://bit.ly/2QMSpcl.

Fulton Board of Commissioners again holds votes on Barron’s firing

The debate over whether or not Richard Barron’s termination as Fulton County’s registration and elections director should be rejected continues.

In its nearly four-year history, Mercedes-Benz Stadium has hosted a Super Bowl, a College Football Playoff championship game and a MLS Cup con…

Starting next month, the Fulton County Board of Commissioners’ meetings are returning to an in-person format for the first time since June due…