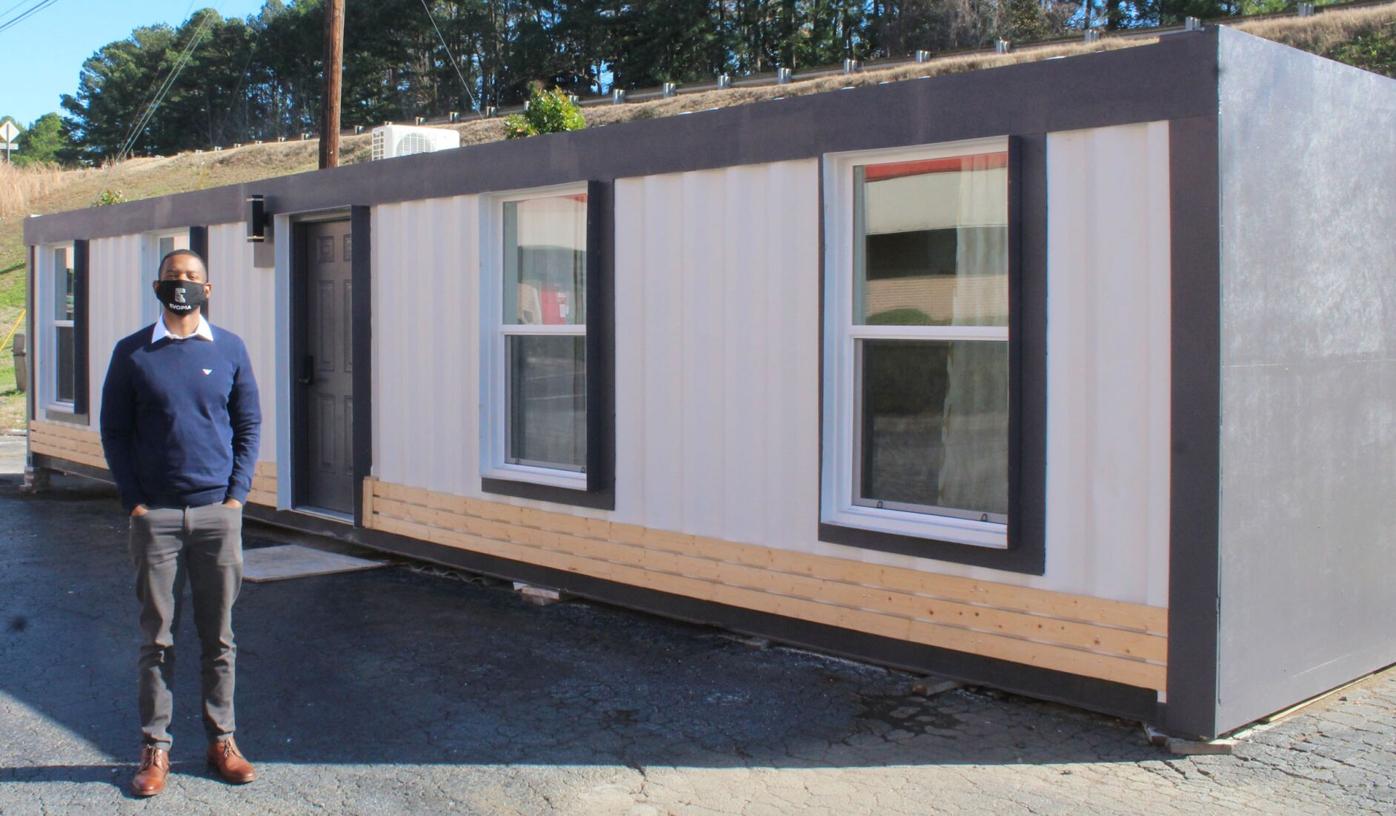 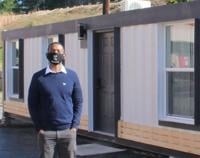 Evo Haven CEO Majesty Gayle stands outside its model home, which was built from a used 40-foot-long cargo container. 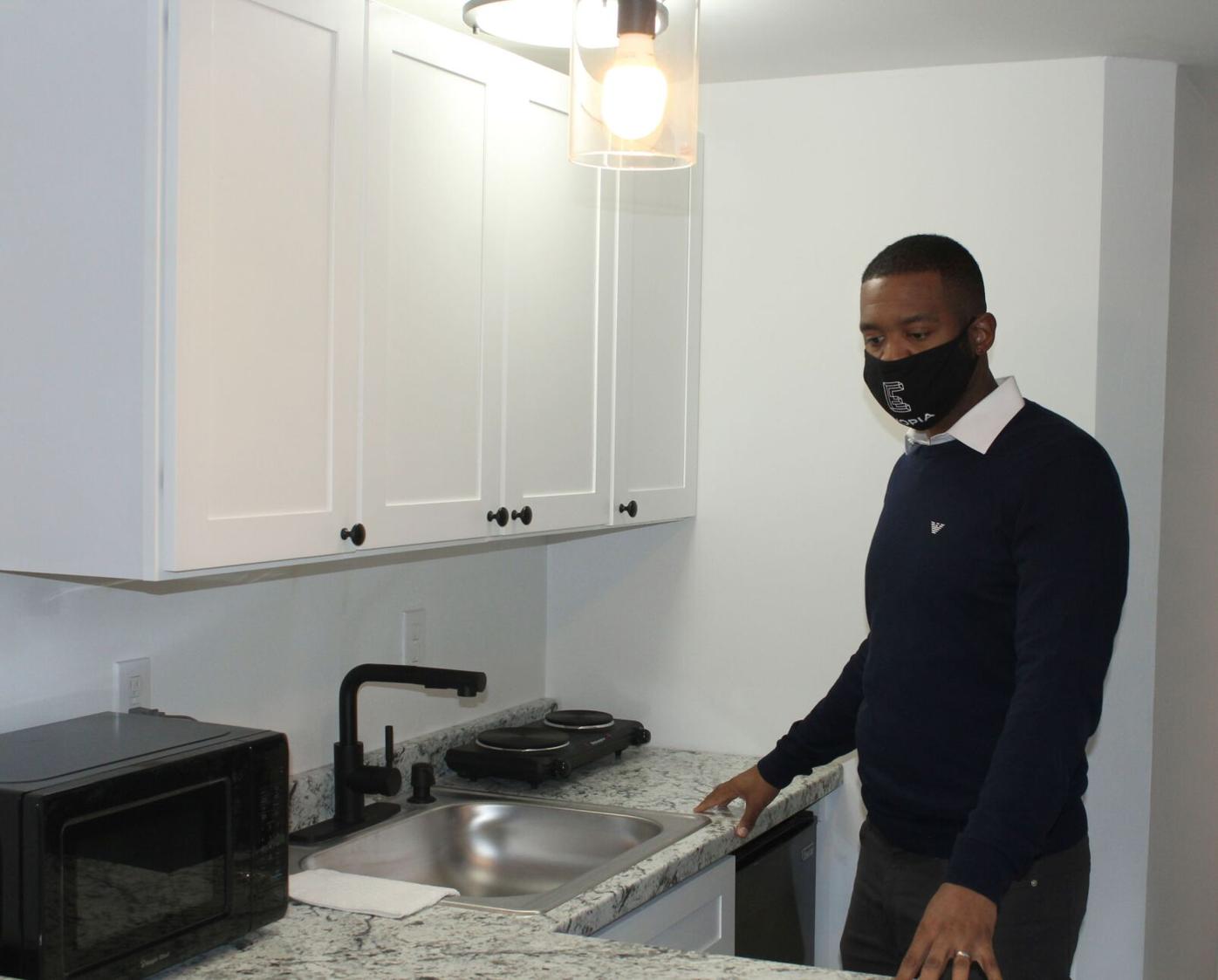 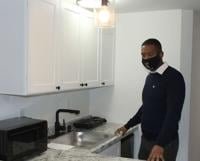 During a tour of Evo Haven’s model home, CEO Majesty Gayle talks about the features in its kitchen. 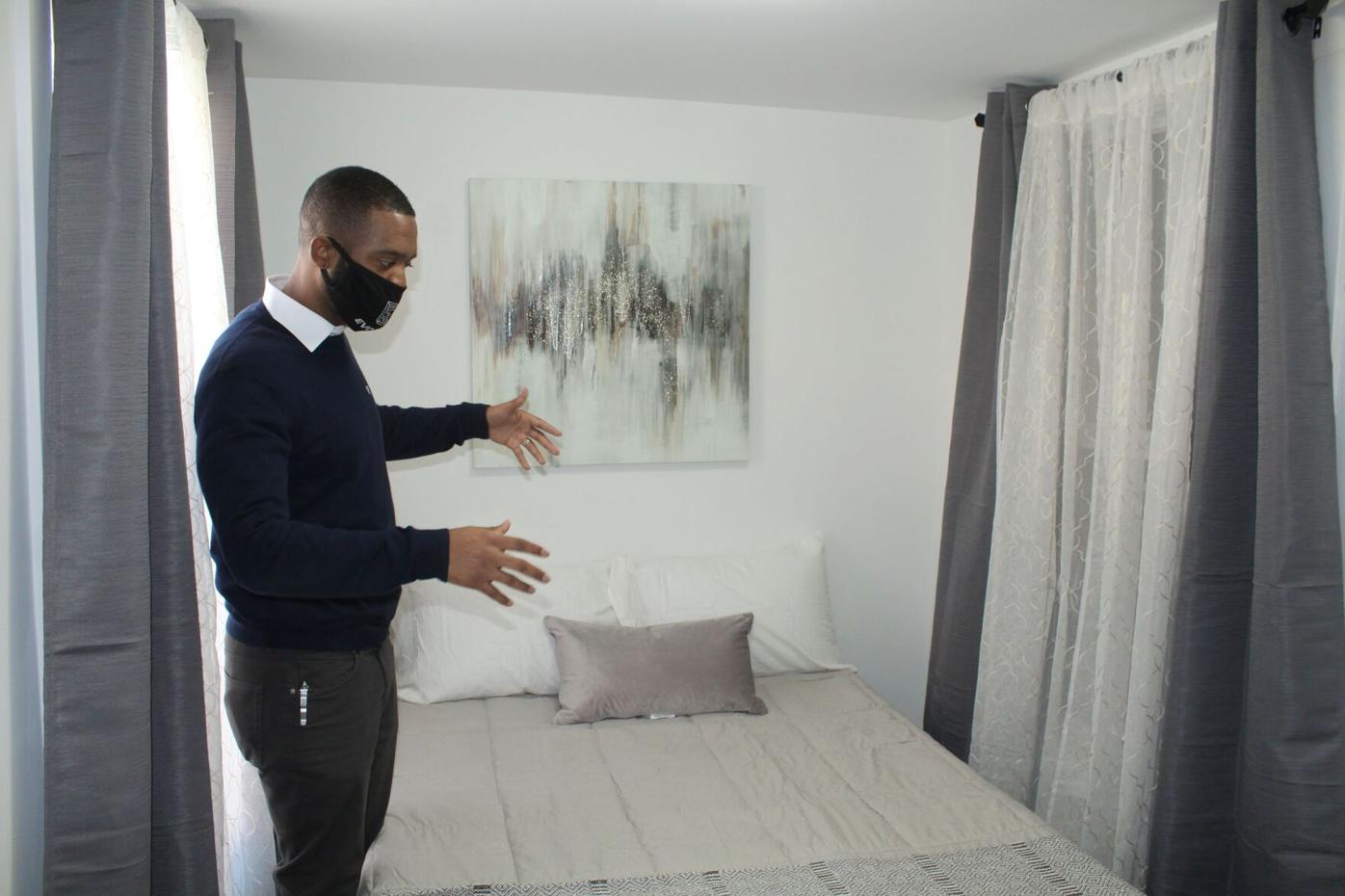 During a tour of Evo Haven’s model home, CEO Majesty Gayle discusses its bedroom for adults, which can fit a queen-size bed. 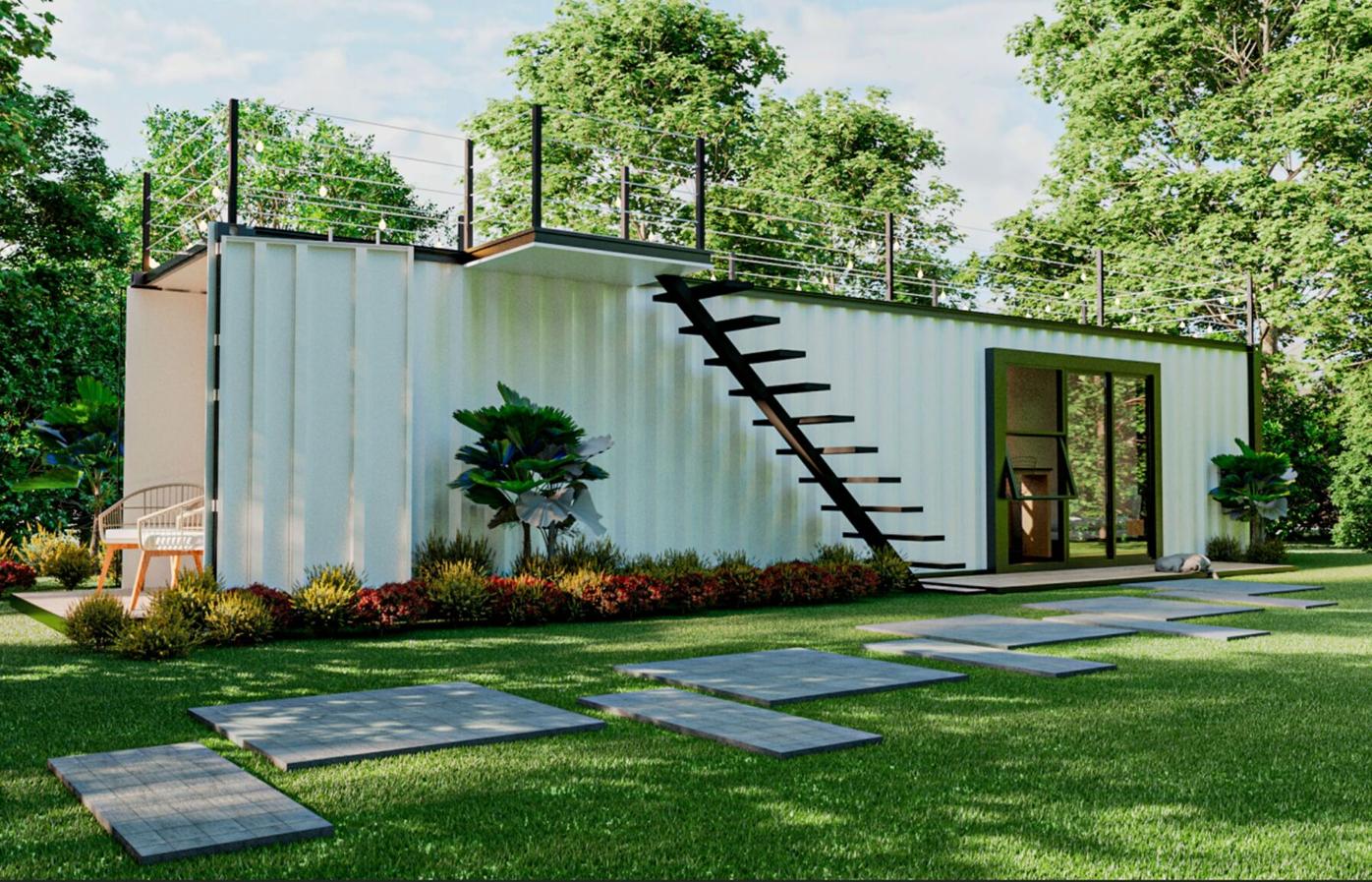 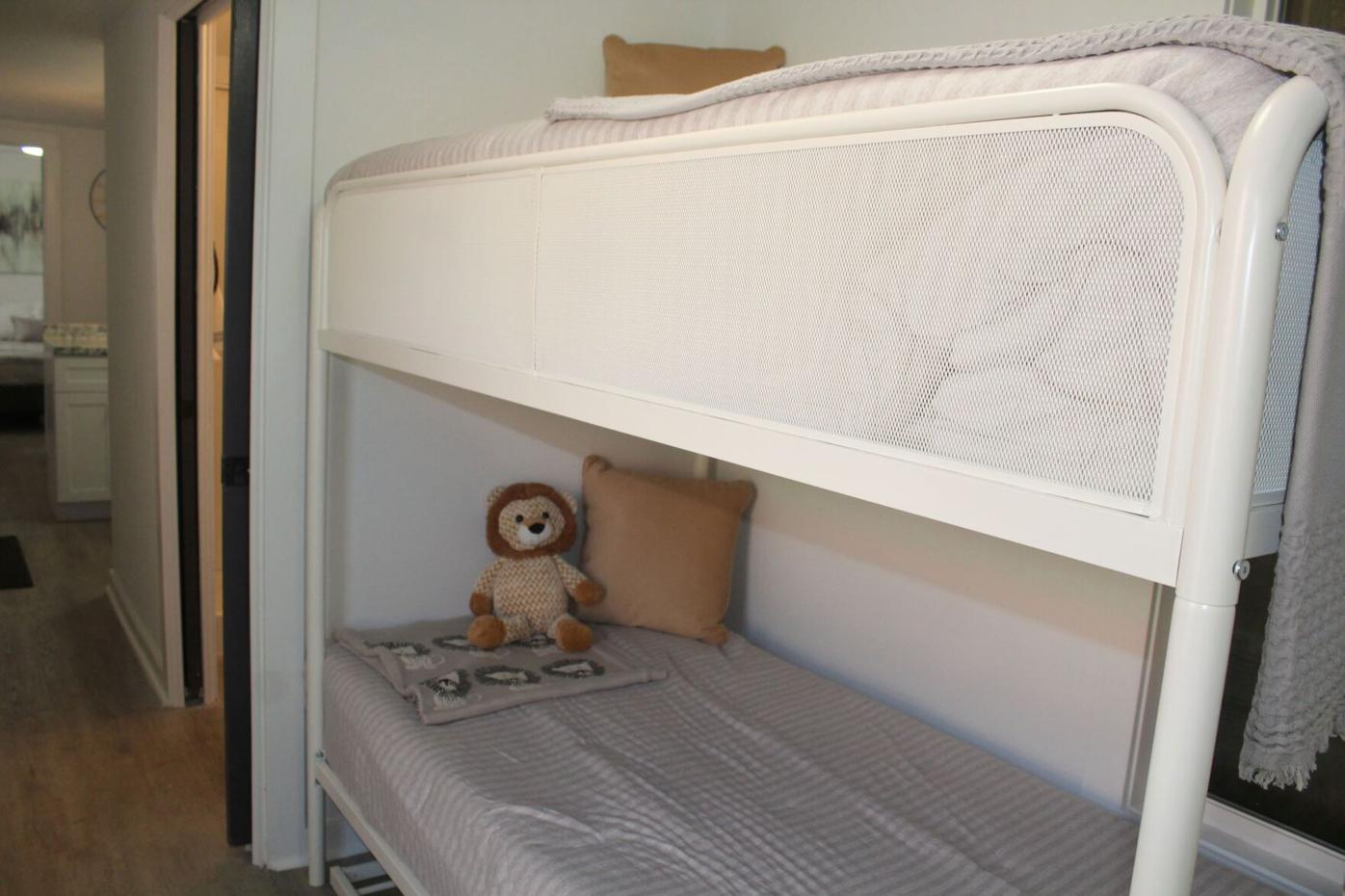 Evo Haven’s model home includes a bunk/trundle bed that can sleep up to three children. 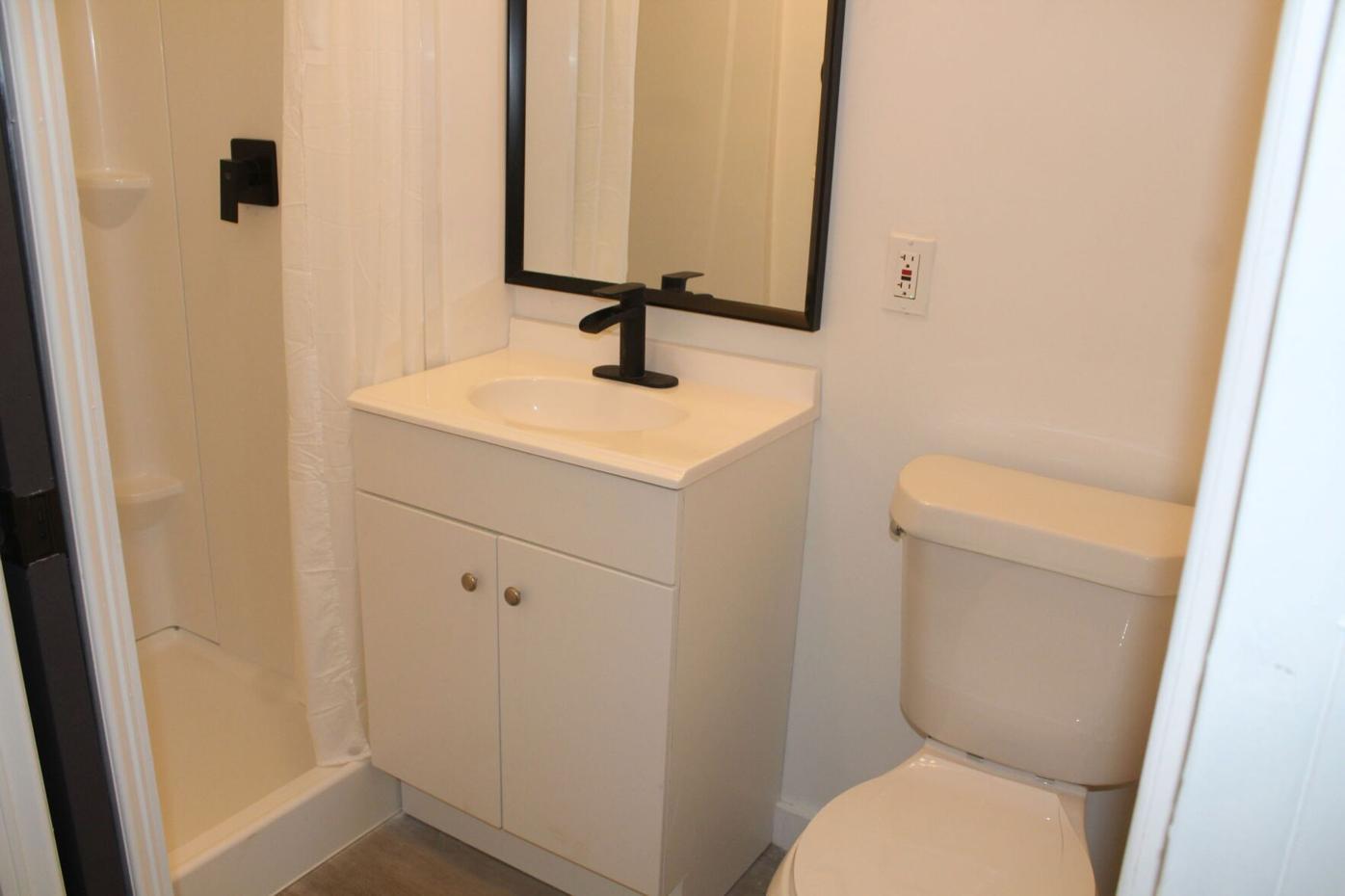 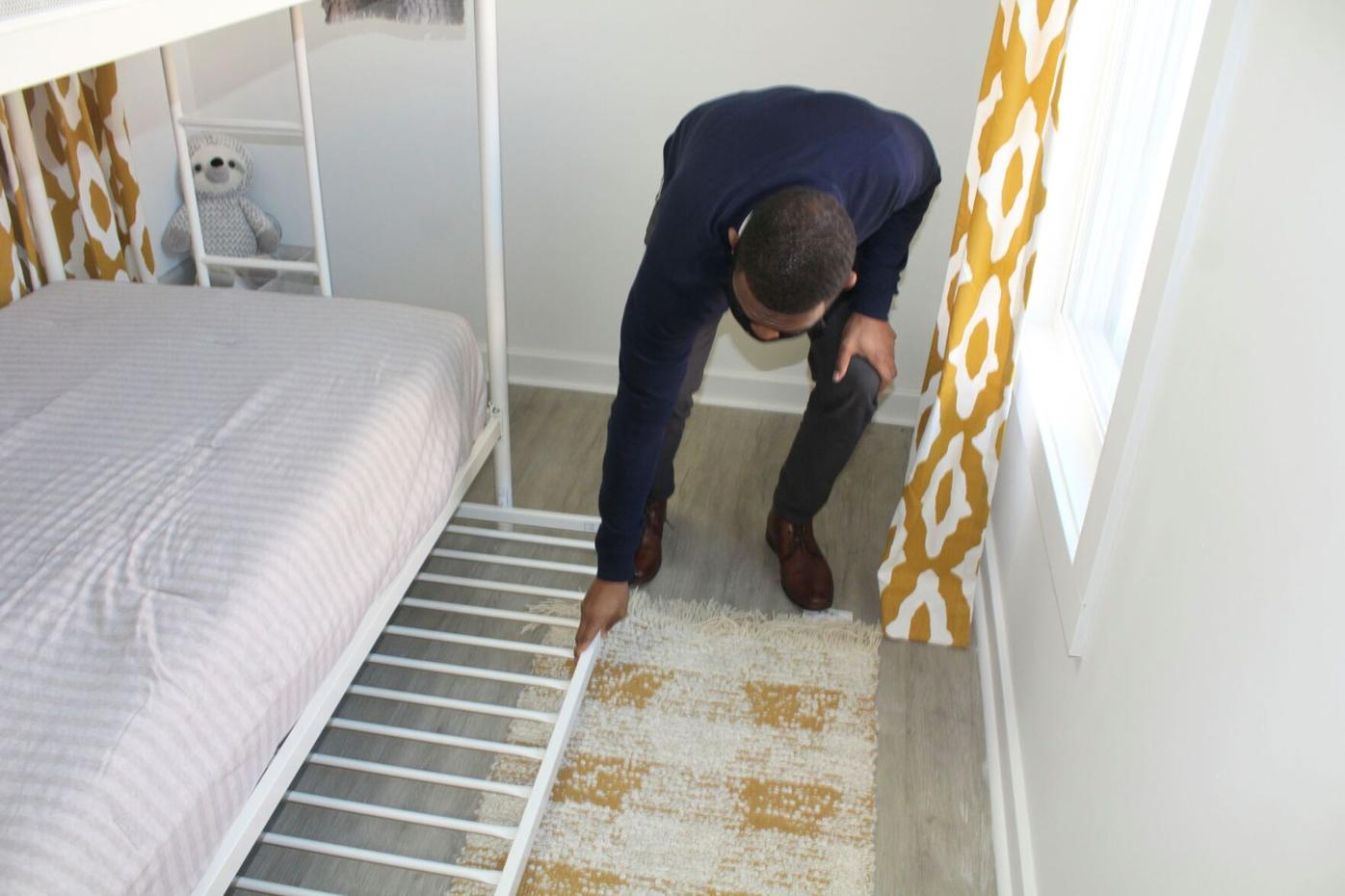 During a tour of Evo Haven’s model home, CEO Majesty Gayle pulls out the trundle bed in the bedroom for children.

Evo Haven CEO Majesty Gayle stands outside its model home, which was built from a used 40-foot-long cargo container.

During a tour of Evo Haven’s model home, CEO Majesty Gayle talks about the features in its kitchen.

During a tour of Evo Haven’s model home, CEO Majesty Gayle discusses its bedroom for adults, which can fit a queen-size bed.

Evo Haven’s model home includes a bunk/trundle bed that can sleep up to three children.

During a tour of Evo Haven’s model home, CEO Majesty Gayle pulls out the trundle bed in the bedroom for children.

This article was updated Jan. 8 at 2:13 p.m. with information and quotes from District 5 South Fulton City Councilman Corey A. Reeves.

The Gayles already have a successful real estate business, INTL Realty Partners. But they also co-own Evo Haven, a new south Fulton County-based company that this year aims to build dozens of tiny homes made from used cargo containers.

They will then place most of them in areas where they can serve as housing for low- to median-income families and individuals, with the rest used for other purposes such as guest houses, pools or pool houses for existing residential developments.

“This (concept) actually was born from the (COVID-19 pandemic) lockdown,” Majesty Gayle, Evo Haven’s CEO, said. “We’ve been developing affordable housing for years, but when the lockdown happened, we saw the need skyrocket and there would need to be innovation in development in order to meet the need. More so, as far as getting prices lower because (the) median (home) price being $300,000 doesn’t work.

“Also, the timeframe to produce new (housing) units ranges from about nine to 18 months, which also doesn’t work. So our goal was to lower costs and streamline the process, and container homes were the perfect solution for both. ... The metal structure provides a great frame to start with. Also, they’re readily available. There are millions of them sitting at different businesses and docks. Also … it allowed us to keep the costs low. That’s how we came up with it.”

Evo Haven’s model home, which was completed Dec. 10, is 40 feet long and 320 square feet. It has two bedrooms – one for adults and one for children – and can comfortably hold up to four individuals, with room for a fifth. Other planned container homes have one bedroom instead of two, and some have ceilings that are a foot taller to allow for more space/storage.

Because the homes can be constructed in a warehouse, they will take about a month to build. Each home costs about $60,000 to construct and will be priced at $85,000, including the land they will sit on.

Majesty Gayle said Evo Haven is under contract with a 10-acre property in the city of South Fulton, where the company plans to install 84 tiny/container homes. With an eye on the environment, the homes there and elsewhere can be powered by solar or geothermal energy. Majesty Gayle said one reason he and his wife came up with the concept was the recent increased interest in tiny homes nationwide.

“It’s super popular,” he said. “We saw it kind of gaining popularity and leaned into that to help get it adopted. But we think tiny homes are a viable solution because we’re seeing the effects of overconsumption.

“Not everybody needs to have a 4,000- or 5,000-square-foot house. That’s where a lot of issues are coming in. We’re thinking changing the mindset of ownership on what we need, our carbon footprint, all of that.”

Majesty Gayle said the city of South Fulton development should be completed by the end of 2021, with the groundbreaking planned for the second quarter.

“Because we streamlined the process, we expect to deliver the units to the end buyers by the end of quarter four,” he said. “So the 84 units will be our target for the year.”

Majesty Gayle added Evo Haven also has plans for a multifamily development in addition to offering the tiny/container homes as guest and pool houses.

“We have people interested in that,” he said, adding the company plans to build about 50 to 80 accessory units for individuals and families that have existing residential property.

Other then the city of South Fulton, Evo Haven is in talks with the cities of Atlanta and Palmetto about adding tiny/container homes there, Majesty Gayle said, adding the company also plans to place homes in DeKalb County and has already identified at least eight properties for potential home developments in Fulton.

“The goal of the pilot is to provide proof of concept for these jurisdictions,” he said. “… Our goal is to go where the need is the greatest, and that is definitely in the city of Atlanta, some areas of DeKalb County as well. We’re focused on trying to be in the city center as possible.”

Majesty Gayle said the biggest challenge Evo Haven has faced thus far is “the red tape involving zoning because the tiny homes and the containers are somewhat of a novel concept, so most jurisdictions don’t have provisions for them and we’re having to create those.”

“That’s why we’re working with the council members and the mayors’ offices to figure out what that would look like,” he said. “… But they’ve been very supportive and are using our model as an example of what can be. They’re actually doing some changes to their zoning ordinances and future land-use maps at the moment. We’re keeping our fingers crossed to hope that all works out with that process.”

The Gayles have worked with District 5 South Fulton City Councilman Corey A. Reeves and District 65 State Rep. Mandisha Thomas, D-South Fulton, on navigating the zoning process. Reeves said he’s in favor of the project, but it will require changes to the city’s comprehensive land-use plan and zoning code.

“Before we do that, we have to get public input,” he said. “It is an idea I like personally because of (residents having) micro-living spaces and owning the land. It’s something new, but I see in the future it’s something that’s going to be needed. I support the idea, but we’re going to have to have a lot of subject matter input from planning and zoning and our most valuable asset, our constituents.

“It will bring what we call a livable wage in home ownership, and that will bring stability to the community and will also bring a tax base.”

One Atlanta couple is giving back by opening Evopia, a new nonprofit in southwest Fulton County to help the community in a variety of ways.

To help stay afloat amid the COVID-19 pandemic, metro Atlanta’s minority-owned small business owners can apply for up to $10,000 each in grant…

With a focus on luxury, the Epicurean Atlanta hotel is expected to open late this summer in Midtown.

The city of Atlanta and MARTA are addressing their affordable housing issues in a major way, with each devoting up to $100 million in bonds or…