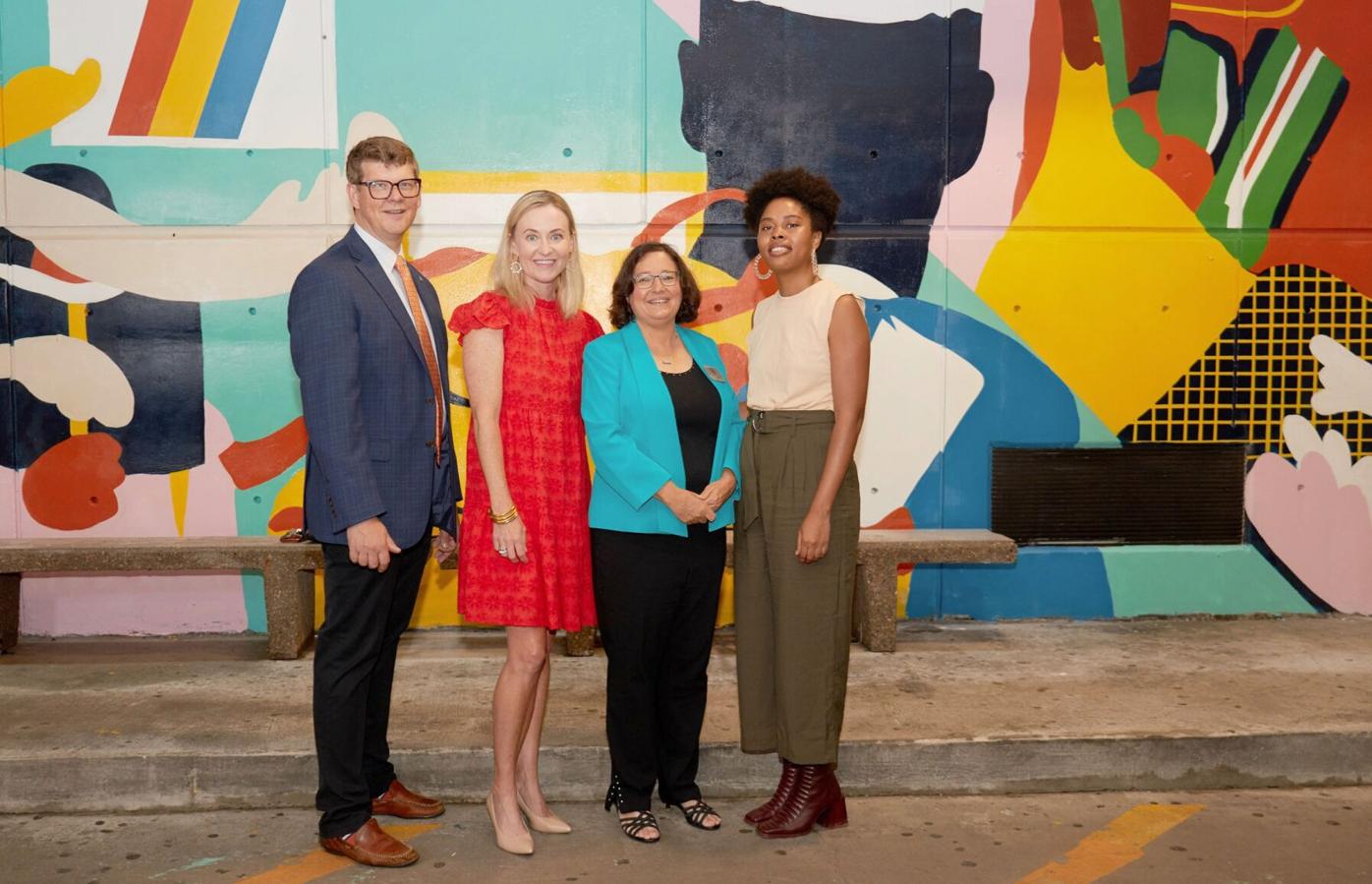 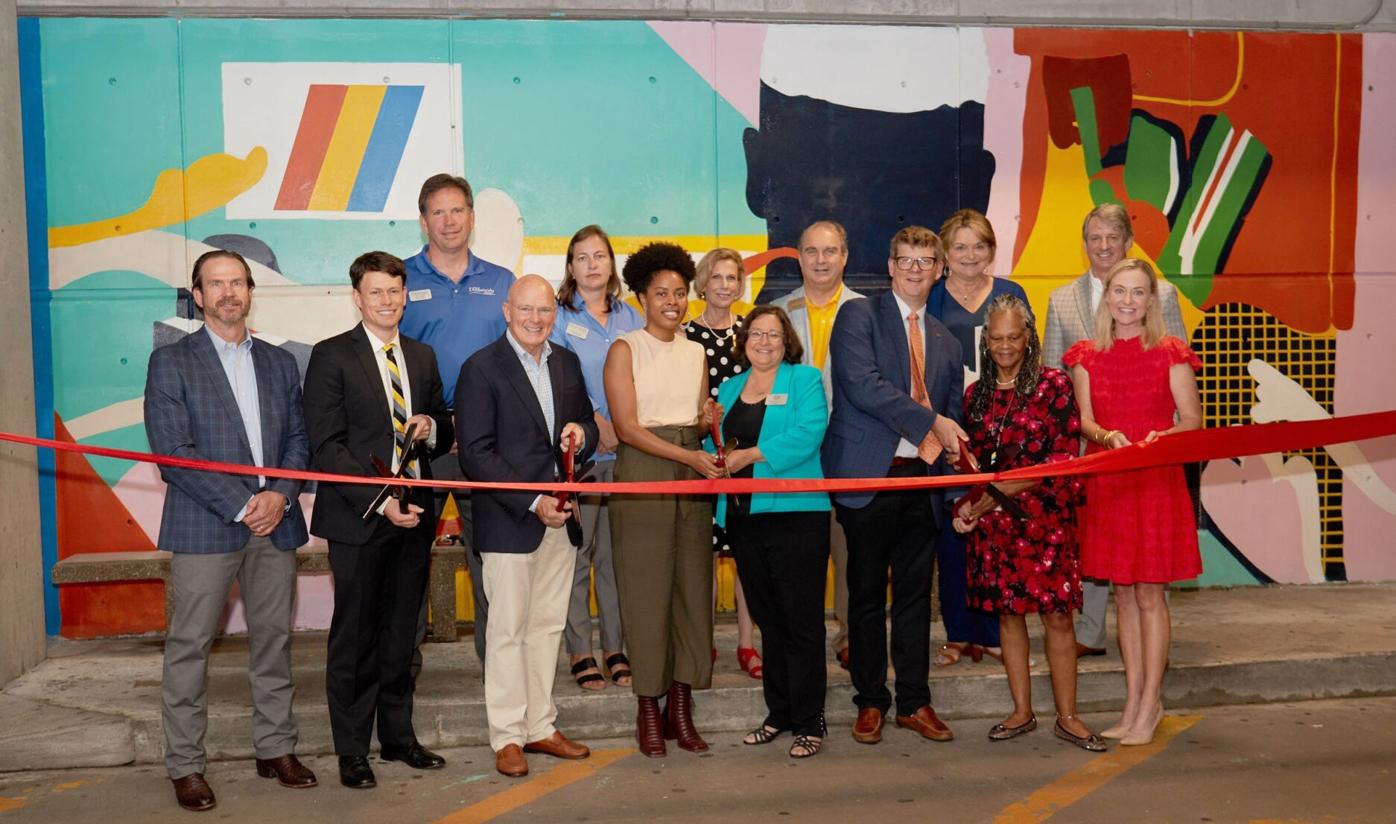 Dunwoody Mayor Lynn Deutsch and artist Neka King, front center, and others cut the ribbon to officially open the enhancements the city, MARTA and the Perimeter Community Improvement Districts (PCIDs) made to the Dunwoody MARTA station, including King’s mural behind them.

Dunwoody Mayor Lynn Deutsch and artist Neka King, front center, and others cut the ribbon to officially open the enhancements the city, MARTA and the Perimeter Community Improvement Districts (PCIDs) made to the Dunwoody MARTA station, including King’s mural behind them.

The Dunwoody MARTA station will greet commuters and visitors with several upgrades, including a 70-foot-wide mural, the city of Dunwoody announced.

The improvements, made through a partnership between the city, the Perimeter Community Improvement Districts (PCIDs) and MARTA, were completed June 22, according to a news release.

They include a three-panel mural tilted “The Commuters” and designed and painted by Atlanta artist Neka King in the by commuters and guests passing through Dunwoody Station will be greeted by a suite of station enhancements in the shuttle loop area. It’s one of the area’s largest pieces of public art.

King’s piece was picked from among two dozen candidates by a panel of local stakeholders including representatives from the city, the Spruill Center of the Arts and MARTA Artbound. “King’s concept was chosen for its vibrancy, unique perspective and connection to the space around it,” the release stated.

In the release, Dunwoody Mayor Lynn Deutsch said, “Neka King’s artwork transforms bare walls into an inviting space that is colorful and creative. Improving the commuters’ experience is key to increasing ridership both on MARTA and the shuttle services. I’m excited about this collaboration with MARTA and look forward to more public art projects at the Dunwoody station and throughout the city.”

Other station improvements include prominent shuttle wayfinding, a crucial functional addition for riders navigating connections between MARTA, Xpress and shuttle services; a new information panel to give riders easy avenues to access real-time tracking, schedules and other updates and more lighting, which will be finished later this month to improve visibility in the shuttle loop.

The PCIDs funded the mural and shuttle enhancements as part of a program to improve the daily transit experience for area professionals, visitors and residents. In partnership with MARTA’s Artbound program, station architects and engineering team, staff of the PCIDs’ Perimeter Connects program planned a series of improvements that would better reflect the station’s rising importance and connections to the Central Perimeter business district.

“Transit is a key ingredient for the success of the Perimeter business district and the thousands of companies that call it home,” PCIDs Executive Director Ann Hanlon said in the release. “As offices reopen and people return to their commute, we had the opportunity to give them a better experience and to do so quickly. We’re proud of the partnership that made this possible, and we look forward to continuing to work together to support transit in Perimeter.”

Dunwoody’s Tallmadge resigning from council due to move from city

A Dunwoody City Council member announced she is resigning this summer because she and her husband are moving out of the city.

The city of Dunwoody is one step closer to creating a new park on 9.29 acres of land located on Vermack Road.

Dunwoody leaders and residents recently celebrated the opening of Waterford Park, a new seven-acre greenspace on land previously owned by the …

Clubhouse Atlanta offers ‘hand up’ for adults with mental illness

Clubhouse Atlanta, a space where metro Atlanta adults with mental illness can go to get job training and, eventually, employment with outside …

High's installation and exhibition focus on inclusion and lighting

Police: 2 had meth, syringes in Armuchee