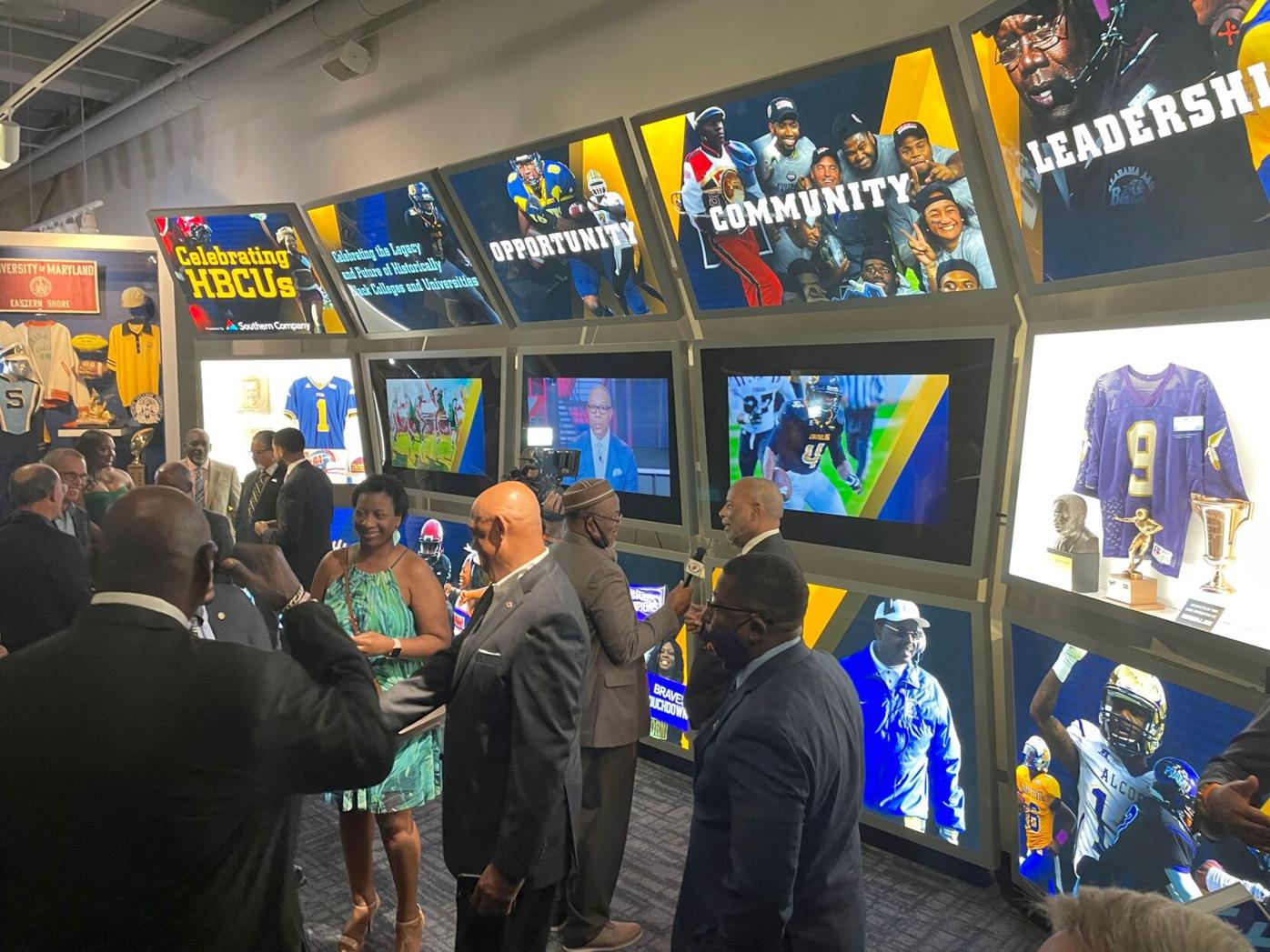 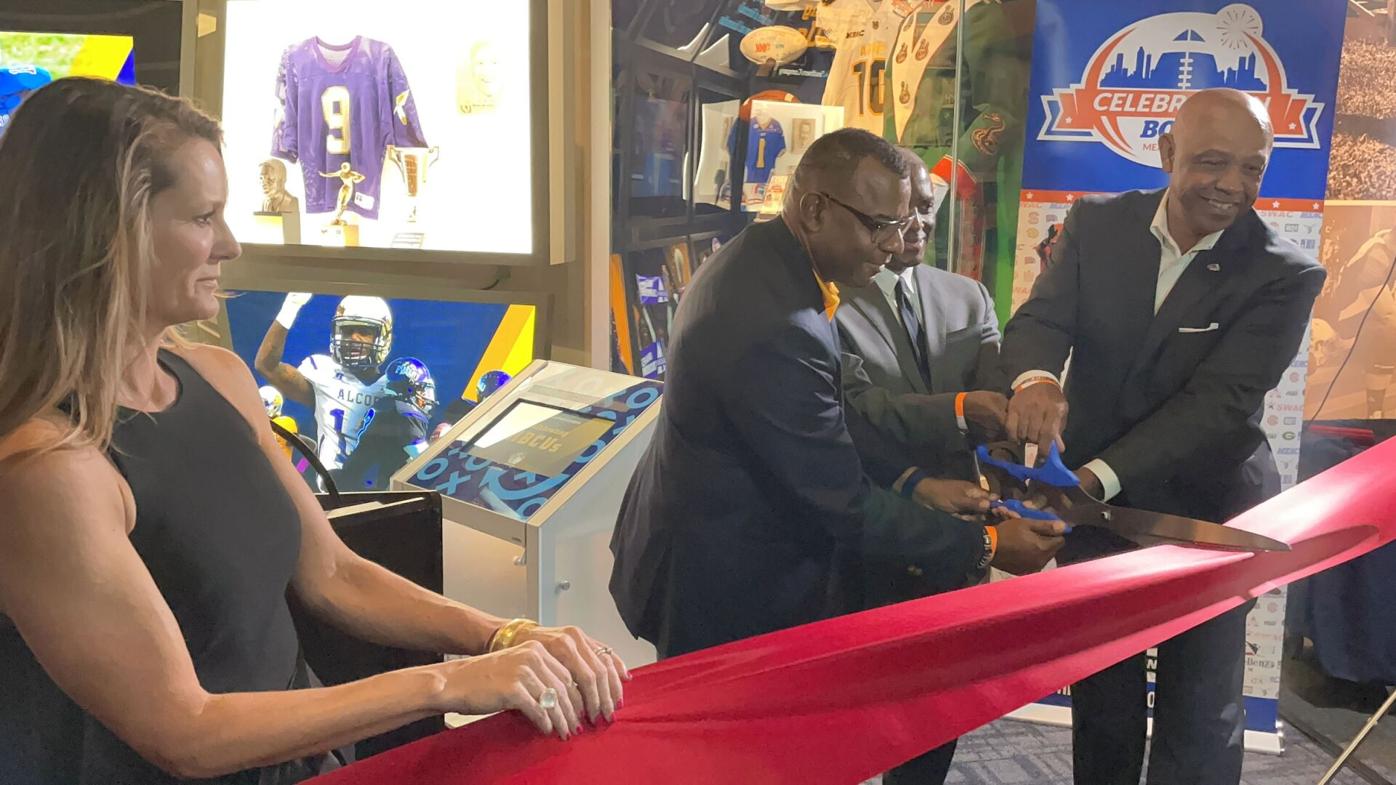 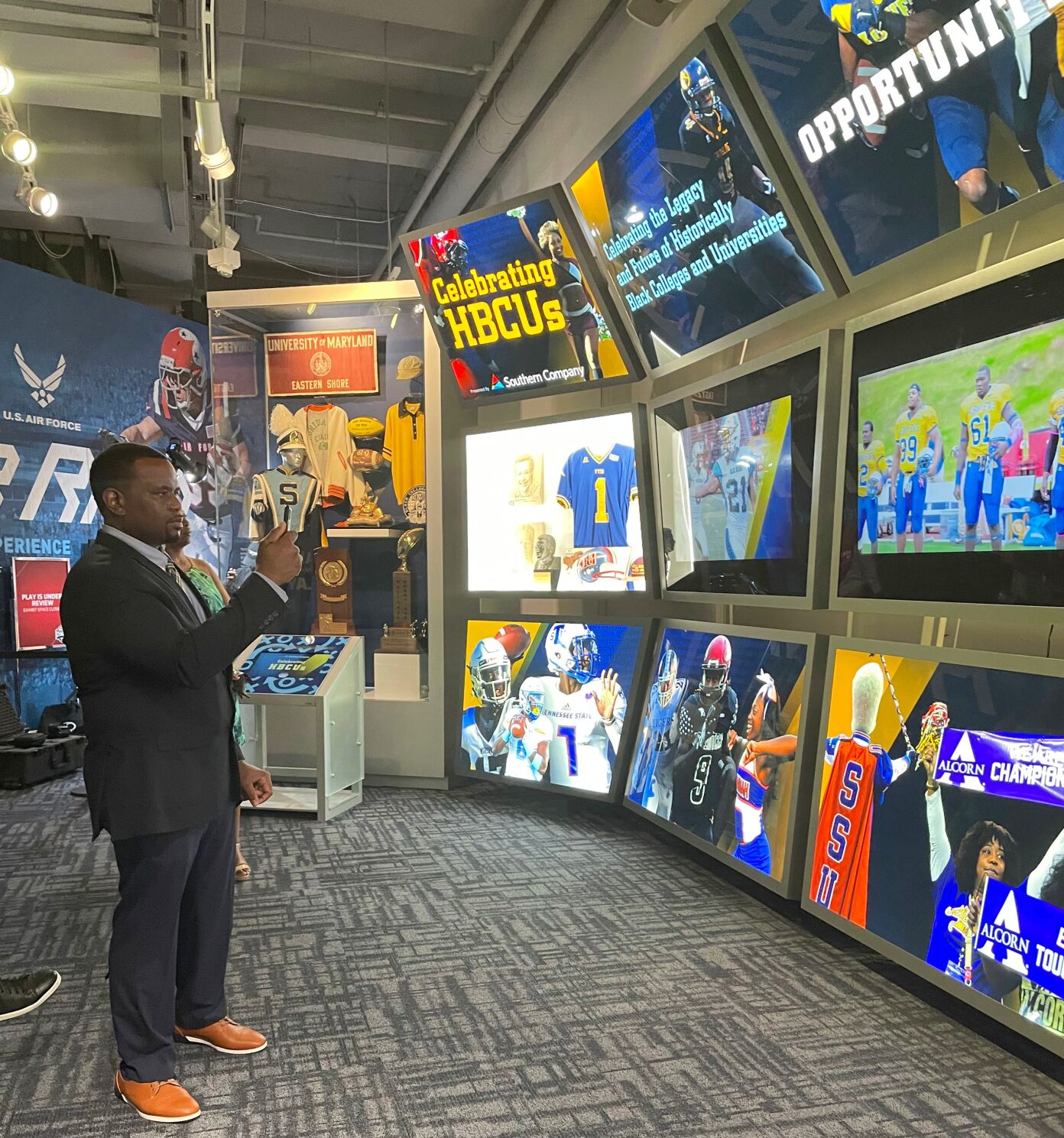 A man takes a photo of part of the Chick-fil-A College Football Hall of Fame’s “Southern Company Celebrating HBCUs” exhibit at its June 19 opening event. 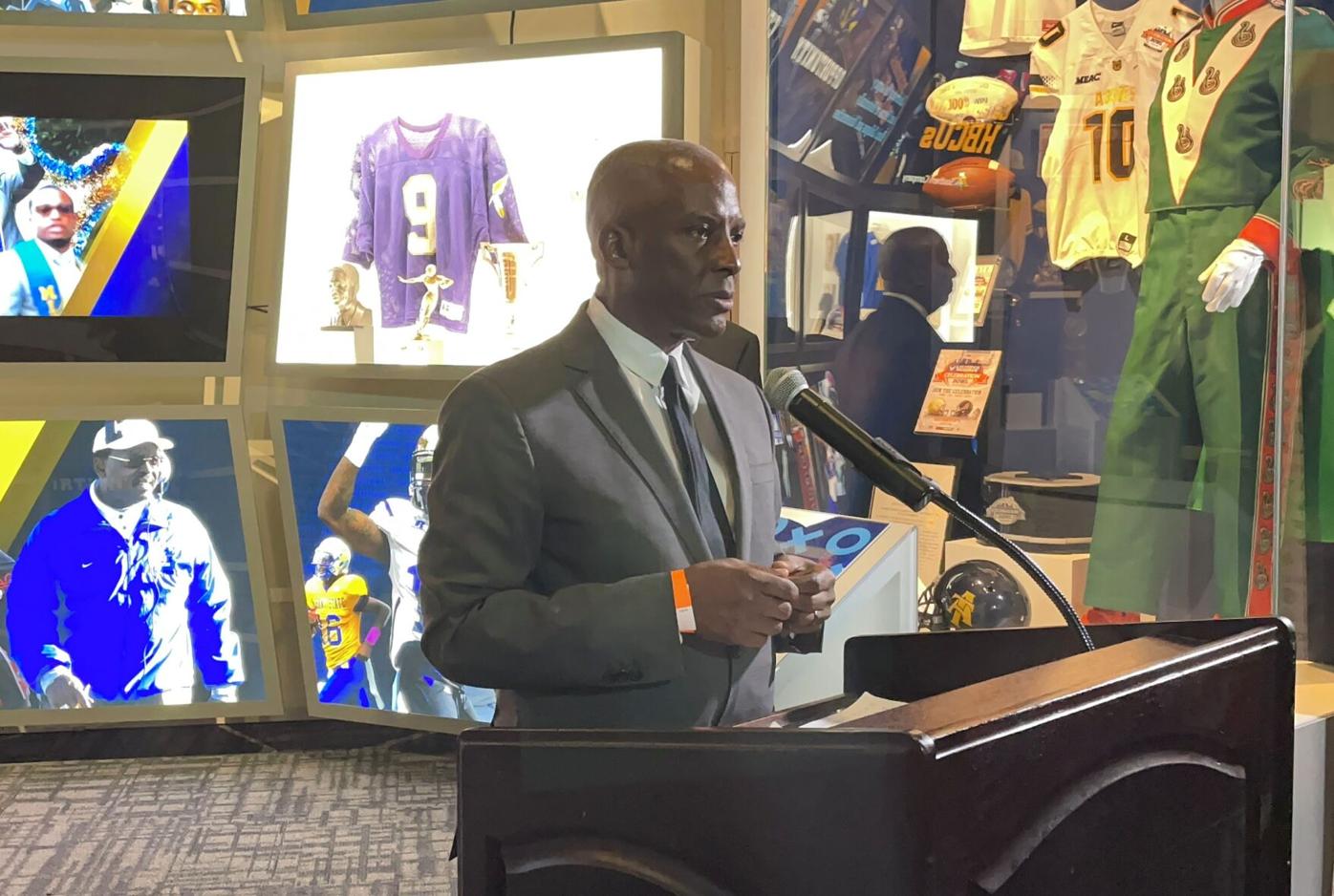 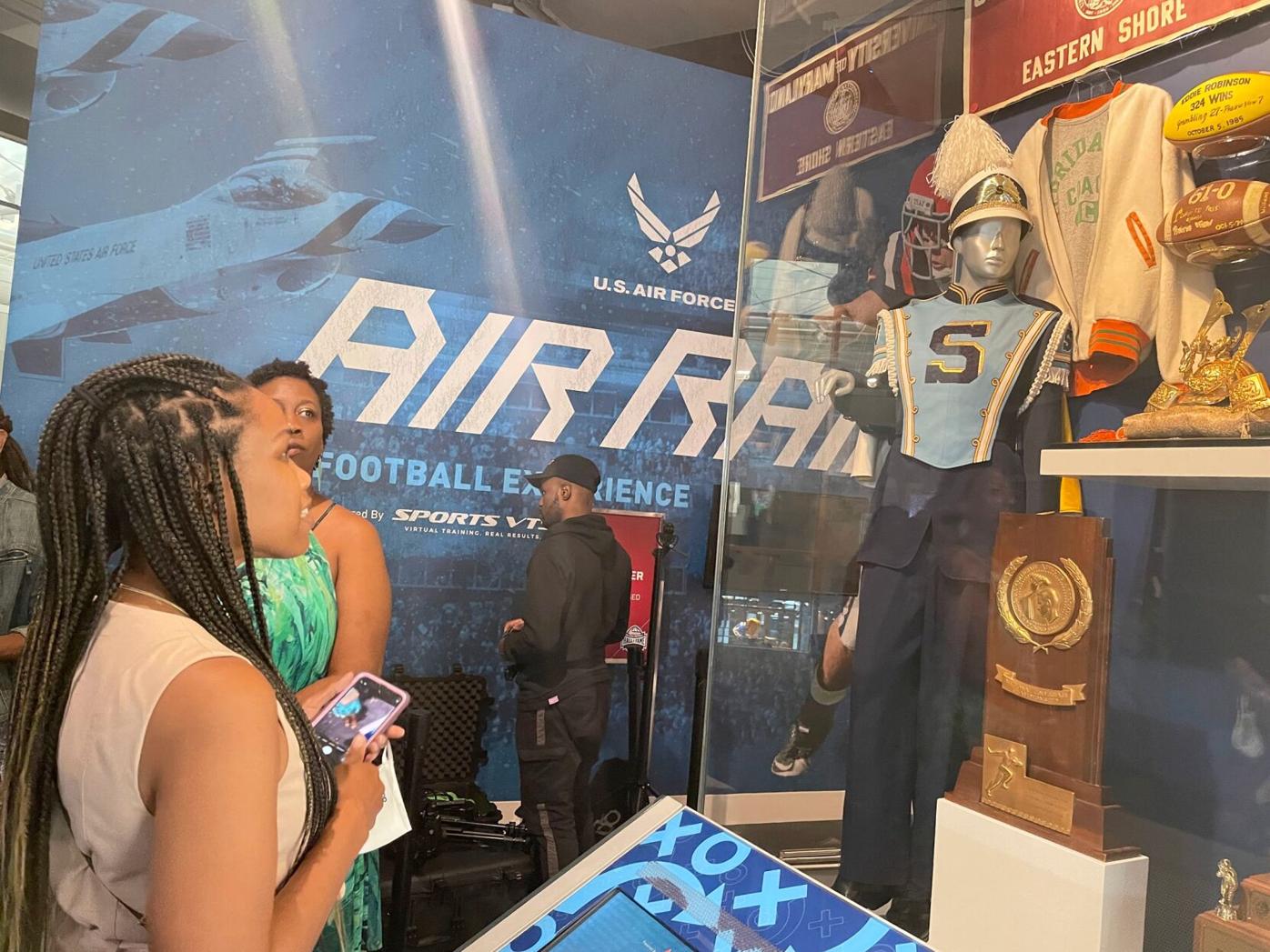 A woman checks out part of the Chick-fil-A College Football Hall of Fame’s “Southern Company Celebrating HBCUs” exhibit at its June 19 opening event.

A man takes a photo of part of the Chick-fil-A College Football Hall of Fame’s “Southern Company Celebrating HBCUs” exhibit at its June 19 opening event.

A woman checks out part of the Chick-fil-A College Football Hall of Fame’s “Southern Company Celebrating HBCUs” exhibit at its June 19 opening event.

From Walter Payton to Jerry Rice to Eddie Robinson, the nation’s 101 Historically Black Colleges and Universities (HBCUs) have produced some of the top football players and coaches over the past century.

So it was natural for the Chick-fil-A College Football Hall of Fame in downtown Atlanta to devote its new permanent exhibit, “Southern Company Celebrating HBCUs,” to those schools.

“So like many exhibits, it’s a long time in the making,” said Jeremy Swick, the Hall’s historian and curator. “Last year I worked on a temporary HBCUs exhibit that celebrated the rich traditions and passions of college football.

“Once we started talking to Southern Company, we thought it was a great idea. A lot of things we do here are sponsor driven since we’re a nonprofit, so we needed a sponsor to help make that dream a reality. Southern Company was the natural tie.”

The exhibit opened June 19 in a space previously occupied by Getting to the Championship, a game similar to EA Sports Head Coach where guests would recruit, train and coach players. It expanded from the 100 square feet the temporary exhibit had to more than 450.

“The biggest reason I was excited for that space was it was a marquee space on the second floor and the widest area we had, because I wanted us to do this exhibit right,” Swick said.

In delving into HBCUs’ impact, the exhibit has three key pillars: community, leadership and opportunity. It includes 30 artifacts plus interactive videos to tell those tales, featuring everything from marching bands, homecomings, historic rivalries and classics to individual players and coaches to testimonials from community leaders.

“One of the most interesting aspects is a digital kiosk where you can take a deep dive on HBCUs: the history, the legacy, the community and the traditions,” Swick said. “… You can also look up the College Football Hall of Famers that attended HBCUs and the Black College Football Hall of Famers. With it being digital, it becomes evergreen. We can always add more aspects to the exhibit.”

In a news release, Hall CEO Kimberly Beaudin added, “As the storytellers of college football’s rich history, the College Football Hall of Fame is honored to share the incredible contributions HBCUs have made across the country. The rich traditions of these schools are entrenched in the game today and we are excited to put them front and center.

“We couldn’t be more thankful for our new partnership with Southern Company and their dedication to bringing this exhibit to life. We can’t wait for guests to experience this unique celebration of HBCUs.”

For added symbolism, the exhibit opened with an event on Juneteenth, which honors the day in 1865 when the last enslaved African Americans were pronounced free individuals after the arrival of U.S. troops in Galveston Bay, Texas.

“I feel that the event went off amazingly,” Swick said. “We had such a well-represented group visit us, not only Southern Company but also many presidents and dignitaries from many HBCUs. It was such an honor to see so many people come out and view this exhibit. You could see this ‘wow’ factor when they saw the exhibit, how much was actually there.”

Tickets to the exhibit are included with admission to the Hall, which is $22.99 for adults, $17.99 for children 3 to 12 and free for kids under 3. For more information or to purchase tickets, visit www.cfbhall.com.

Former Texas A&M football coach R.C. Slocum has been diagnosed with a form of Hodgkin's lymphoma, the school announced Tuesday.