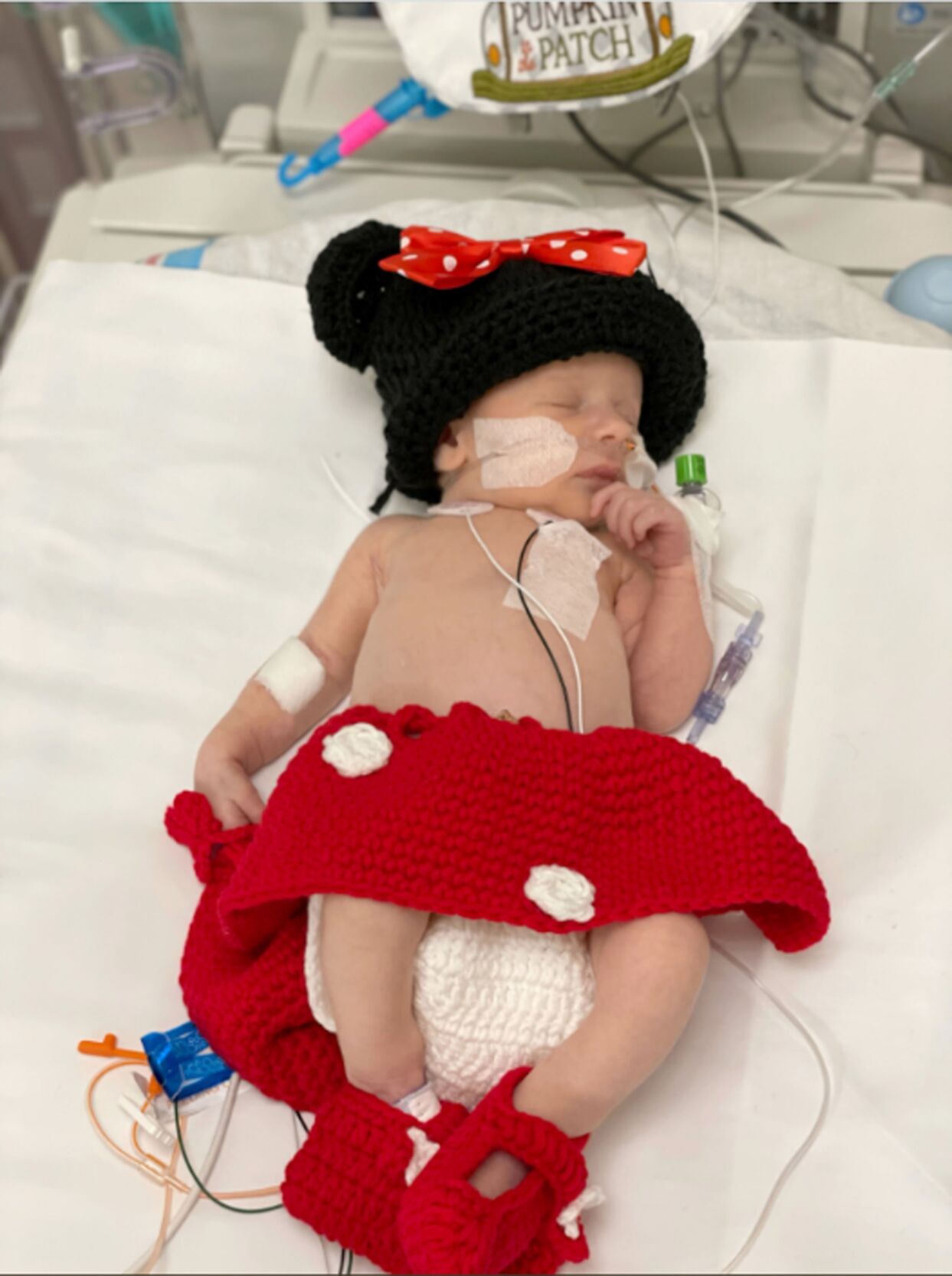 Dressed as Minnie Mouse, Caroline Lakdawala sleeps in the neonatal intensive care unit at Children’s Healthcare of Atlanta at Egleston. 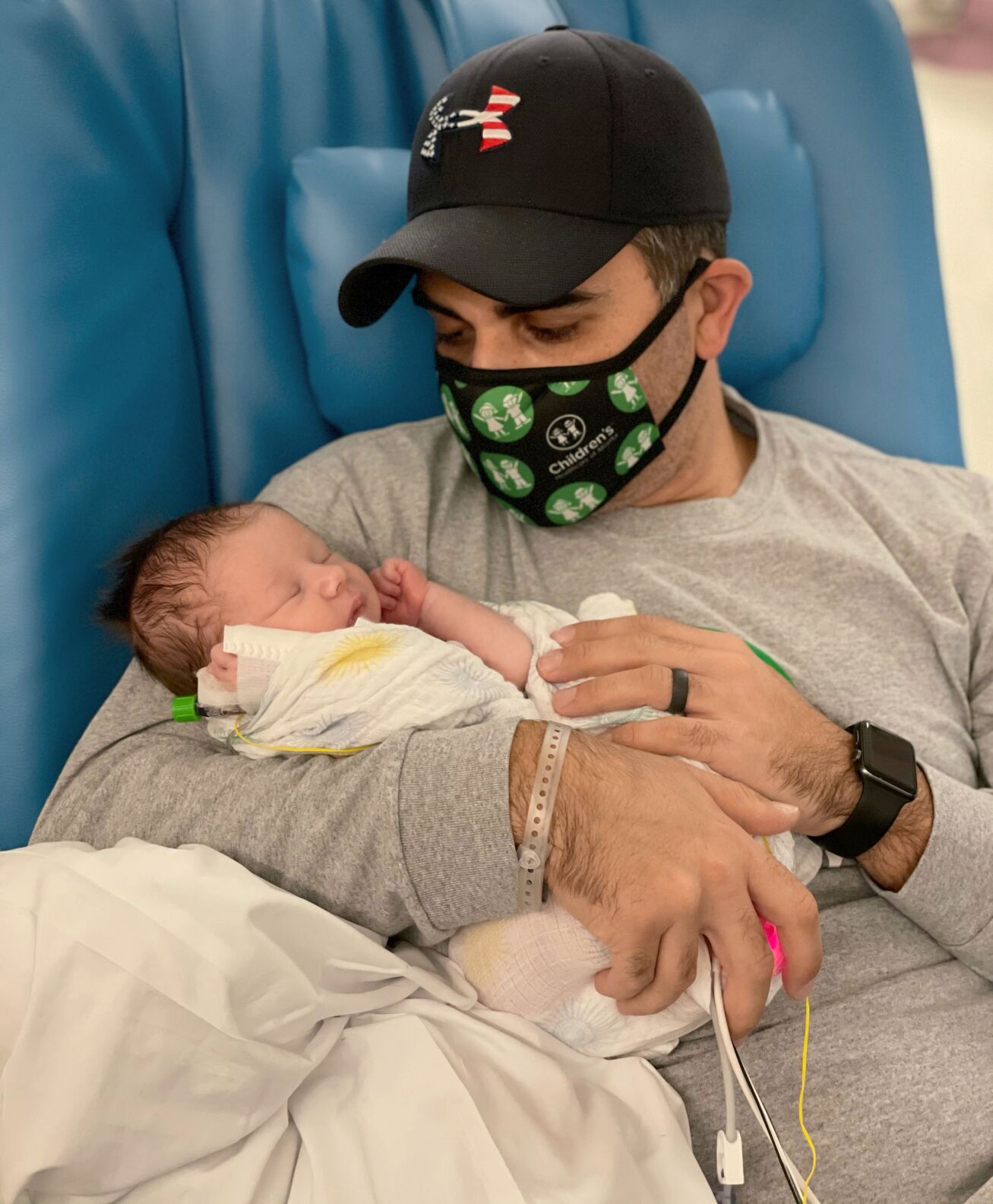 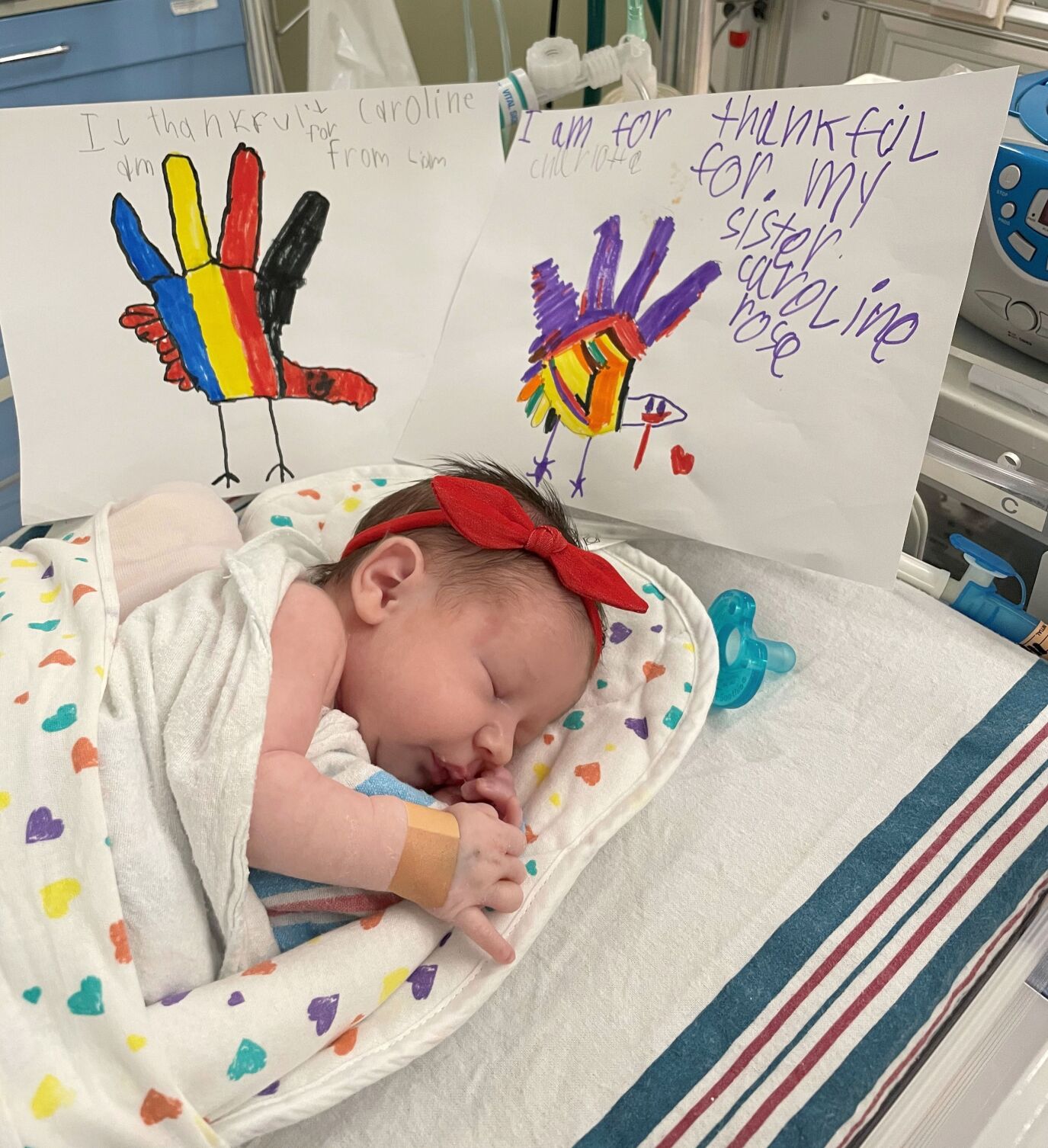 Caroline Lakdawala spent a month in the neonatal intensive care unit at Children’s Healthcare of Atlanta at Egleston last year before going home just before Thanksgiving, and was given Thanksgiving notes from her siblings. 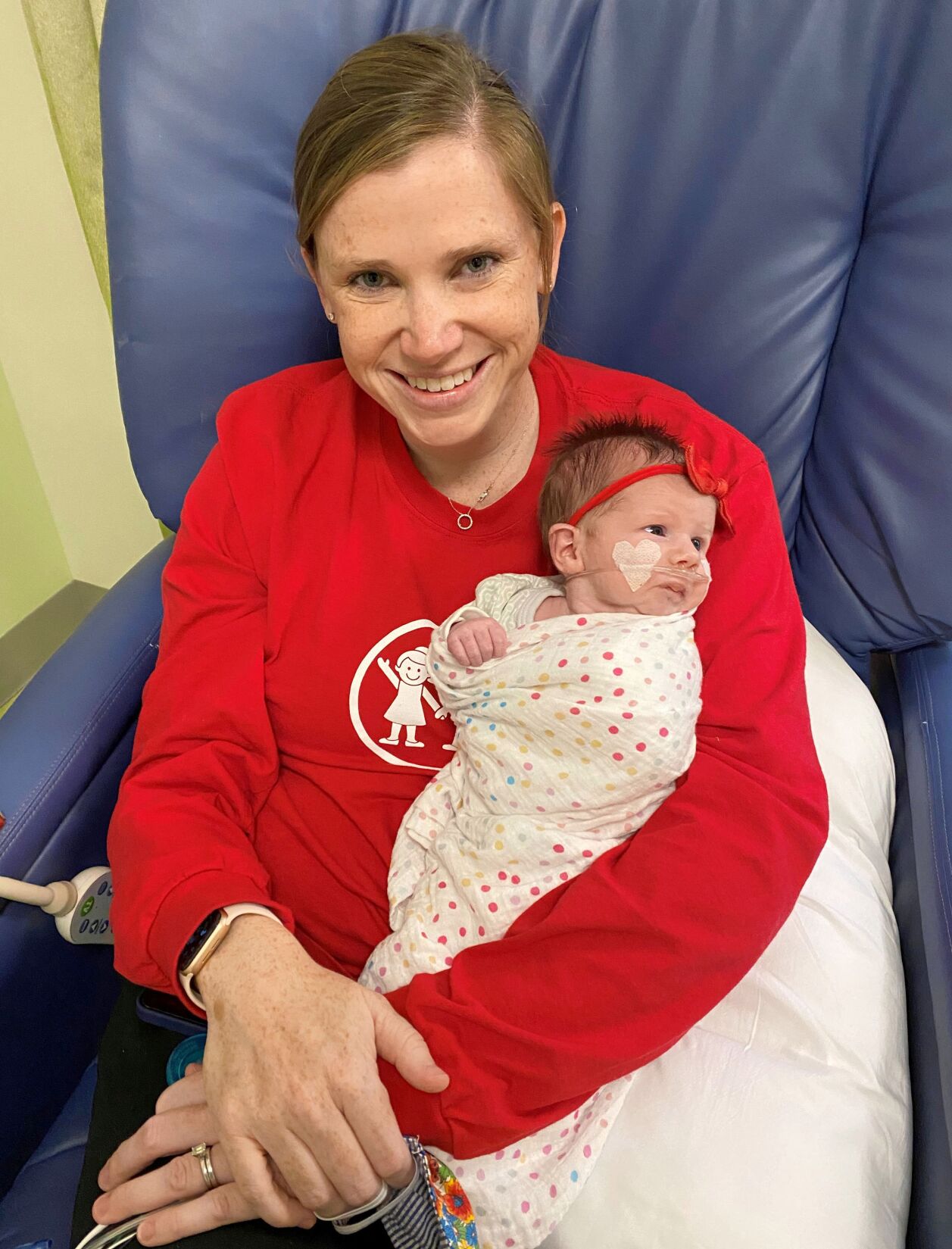 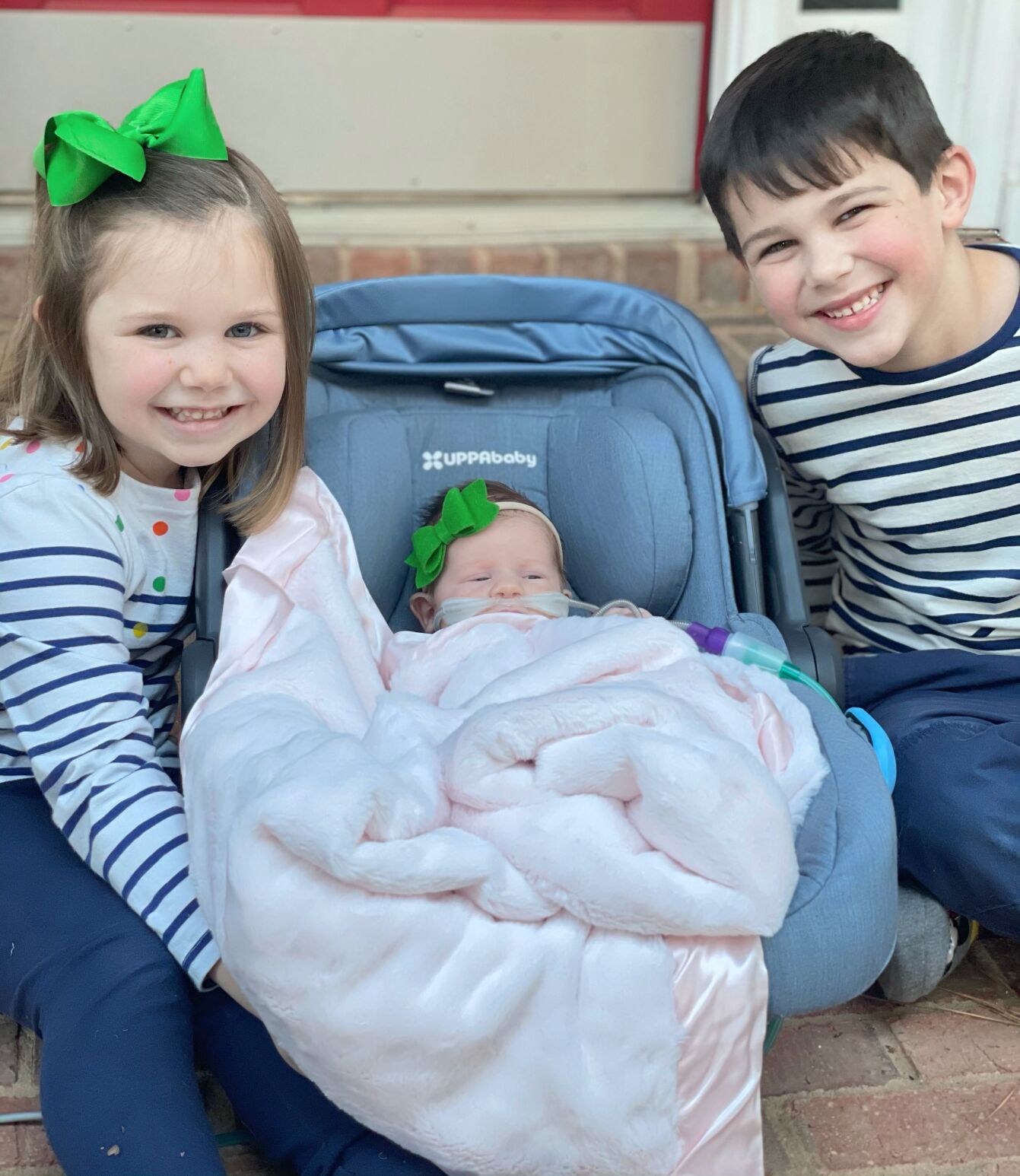 From left, Charlotte, Caroline and Liam Lakdawala gather in front of their house after Caroline was released from Children’s Healthcare of Atlanta at Egleston.

Dressed as Minnie Mouse, Caroline Lakdawala sleeps in the neonatal intensive care unit at Children’s Healthcare of Atlanta at Egleston.

Caroline Lakdawala spent a month in the neonatal intensive care unit at Children’s Healthcare of Atlanta at Egleston last year before going home just before Thanksgiving, and was given Thanksgiving notes from her siblings.

From left, Charlotte, Caroline and Liam Lakdawala gather in front of their house after Caroline was released from Children’s Healthcare of Atlanta at Egleston.

Caitlin Lakdawala’s pregnancy with her third child, Caroline, was going well until the 36-week/eight-month mark, when she didn’t feel her moving in the womb.

So after a doctor determined Caroline’s heart rate was good but couldn’t get her to move, an ultrasound revealed that the umbilical cord was wrapped around her neck twice, and an emergency C-section was performed at Emory Midtown Hospital in Atlanta.

Born Oct. 19, Caroline was transferred to the neonatal intensive care unit (NICU) at Children’s Healthcare of Atlanta at Egleston in DeKalb County just four days later when a bed became available there. But based on the brain damage she had suffered due to a lack of oxygen and blood flow there, the outlook was bleak.

“Obviously there’s a lot of emotions going on at once, but the hurt for me felt like a very grim outcome and statement to accept,” said Jeff Lakdawala, Caroline’s father. “You think of the worst, and they don’t really have anything to offer you on what the future may hold. It’s very hard to discuss, and I was just trying to be strong for Caitlin, too, because it’s a lot on her to process.”

Caitlin added, “We were pretty shocked. … We sat down with a (Children’s) neonatologist, and he said that she may never move anything from below the neck, given where the damage was in her brain.”

Caroline’s doctors at Children’s were not available for interviews by the Neighbor’s deadline, but her nurses were. NICU staff nurse Lilly Pulko, who cared for Caroline in the first two days she was there, said she had HIE (hypoxic ischemic encephalopathy), which is a brain bleed or brain injury.

“When she came out (of the womb), she had all the signs of brain damage,” Pulko said. “She couldn’t suck and swallow. She was critical. It appeared to be a neurological brain issue because everything else was healthy.”

Caroline was intubated with a breathing tube and a ventilator to help her breathe, and soon after she started intensive therapy, as recommended by the neonatologist. It included physical, occupational and speech therapy, as much as seven days a week. Caroline spent a month in the NICU, going home just before Thanksgiving.

Since Caroline was released from the hospital, the Lakdawalas, who live in Peachtree City, have driven 57 miles to Woodstock for her outpatient therapy at In Harmony Pediatric Therapy several times each week. She’s also gone back to Children’s often for check-ups and therapy sessions.

On one of those visits, Caroline was diagnosed with developmental dysplasia of the hip, or severe bilateral hip dysplasia, a condition that occurs in one in every 1,000 births. She was placed in a Rhino brace to help with the growth and development of her hip joints.

Through more than six months of intense therapy, those efforts have paid off in the progress she’s made.

“When we were at Children’s at first, she just didn’t even respond to touch,” Caitlin said. “I remember one day they stuck her for an IV three times, and she didn’t even flinch. Now … if she doesn’t like something, she will voice her opinion and we really think that she became the fighter she is because of all the therapists, doctors and nurses at Children’s, who gave her the absolute best care despite the odds that were stacked against her. …

“(Today) she rolls from her belly to her back. She can roll to her side. She’s really close to rolling from her back over to her belly. She’ll grab a toy. She’s learning how to kick. We have a little piano that makes noise. She’s really good at grabbing the dog’s tail when she wants the dog to get away from her.”

Though Caroline is still eating through a gastronomy tube (G-tube), her prognosis for the future is strong. Both Pulko and Winnie Jones, a Children’s NICU staff nurse who cared for Caroline during the last two to three weeks she was there, said the commitment her parents made to her health, including spending most days at the hospital holding her and talking to her, helped tremendously.

“I really do think she’ll have normal function like any usual child,” Pulko said. “That’s my hope.”

Jones added, “I could tell as a nurse that there was some brain delay, neurological delay, because of her prognosis. But seeing other babies with this prognosis as well, it was amazing to see how much she could do when I met her.

“She was taking the bottle. She was interacting. She was moving her limbs, and every day it was more and more, so it was very, very exciting to see her in that phase and with her parents interacting with (her). It was just wonderful.”

Acts of Kindness: Stories of the community helping during the pandemic

In times like these, the good in people shines.

One sign of the severity of Georgia’s nurse shortage can be seen in the bonuses offered to experienced RNs to join a hospital workforce.