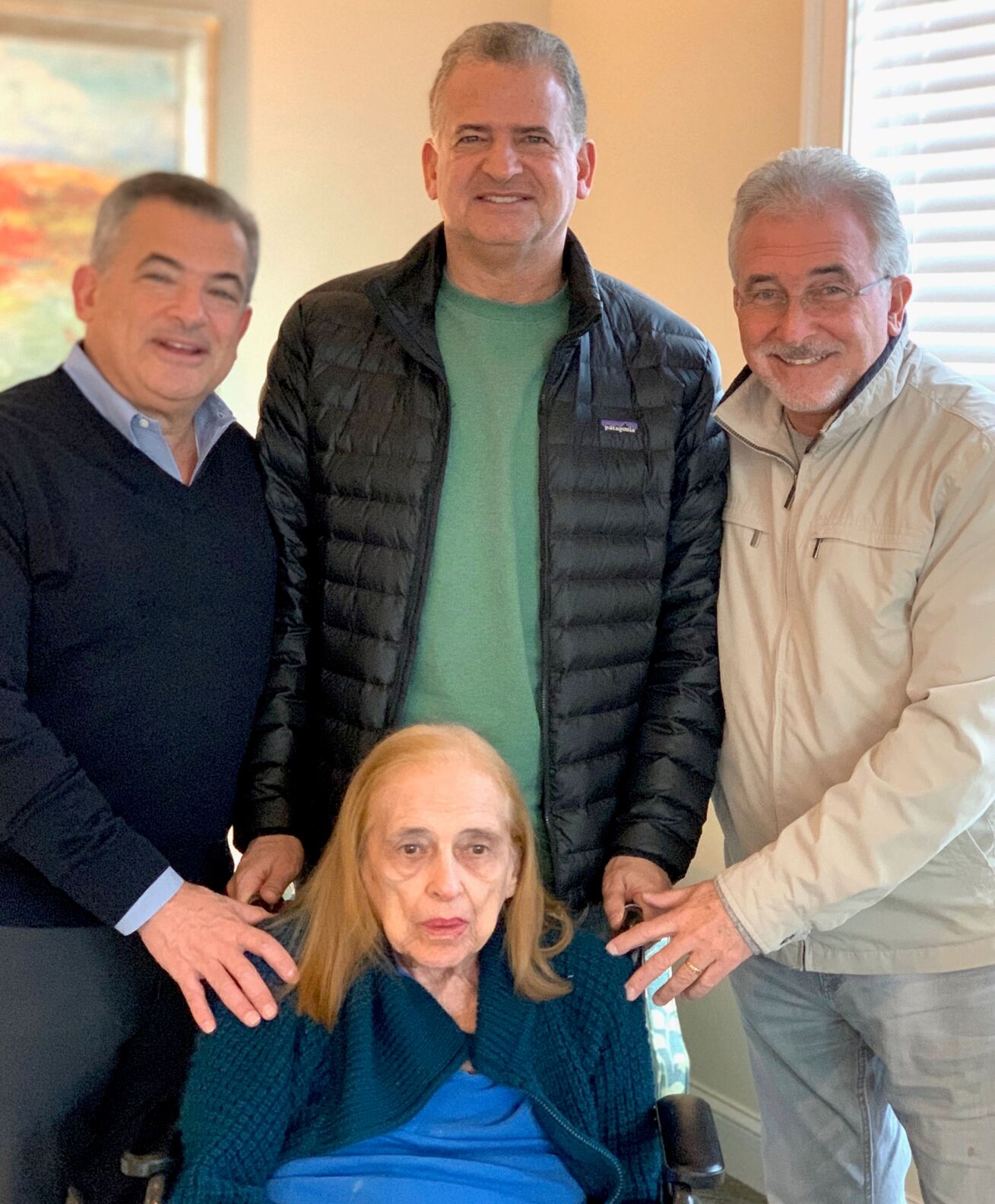 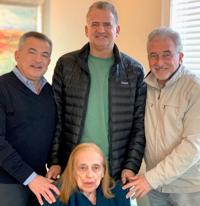 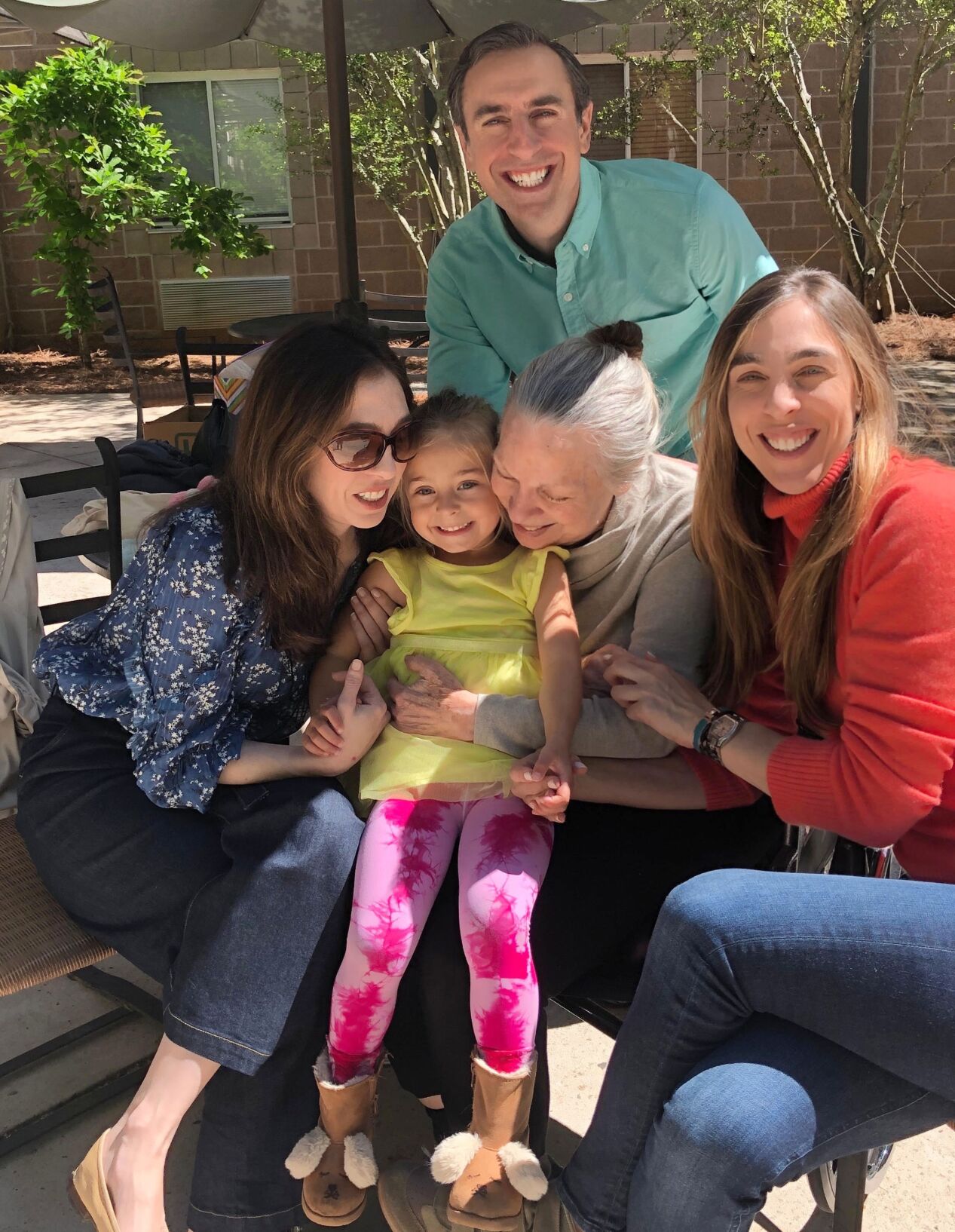 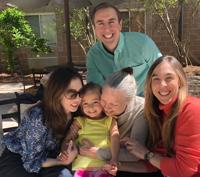 Yvette Trahant, second from right, gets a group hug from her children, clockwise from left, Amelie, Daniel and Alice, and granddaughter Elodie during a visit at Fountainview Center for Alzheimer’s Disease in Brookhaven. 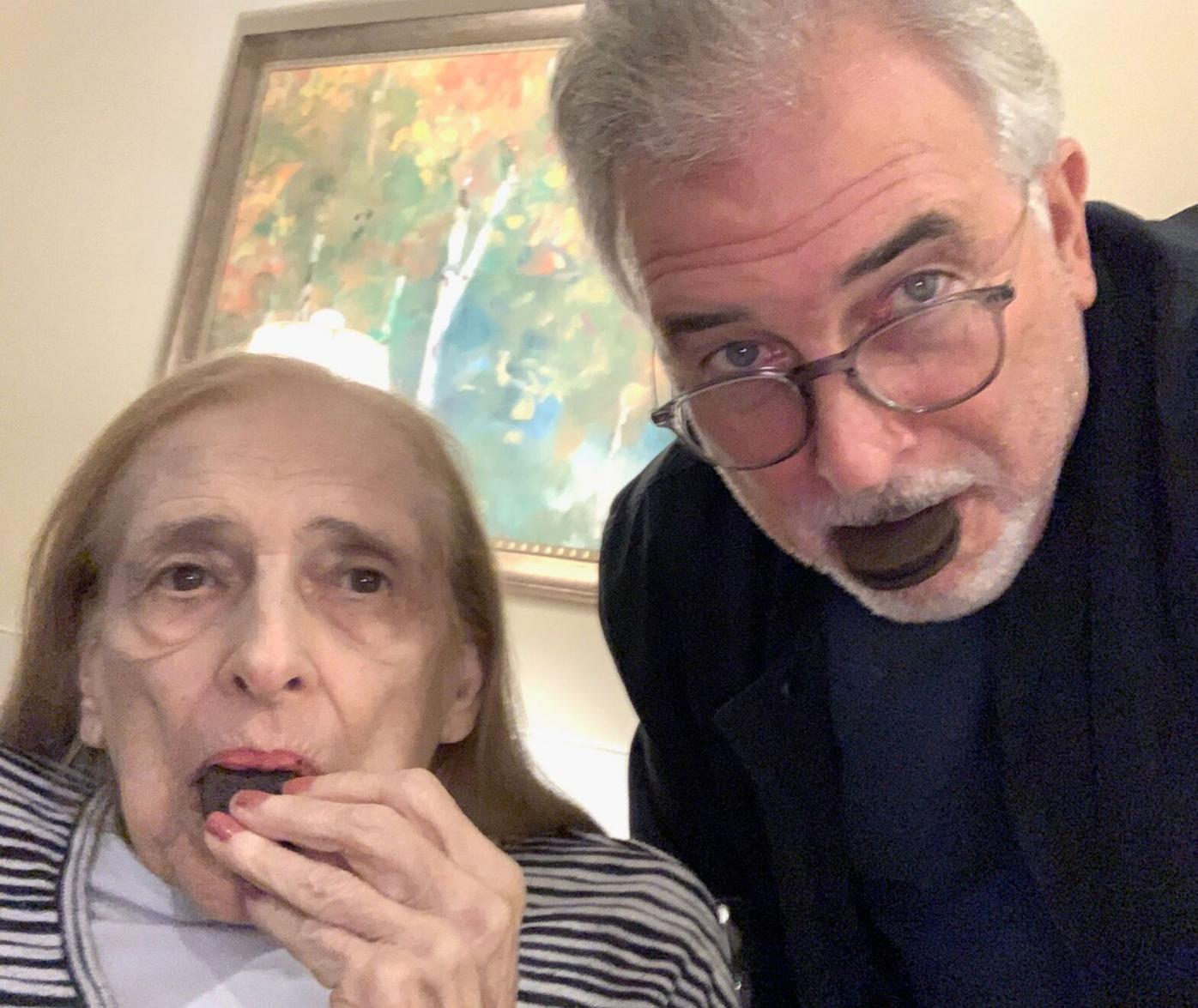 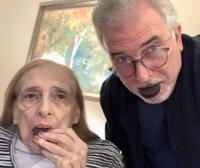 Rob Stearns goofs off as he and his mother, Barbara “Bubsie” Stearns, eat Oreos during a previous in-person visit with her at Somerby Sandy Springs. 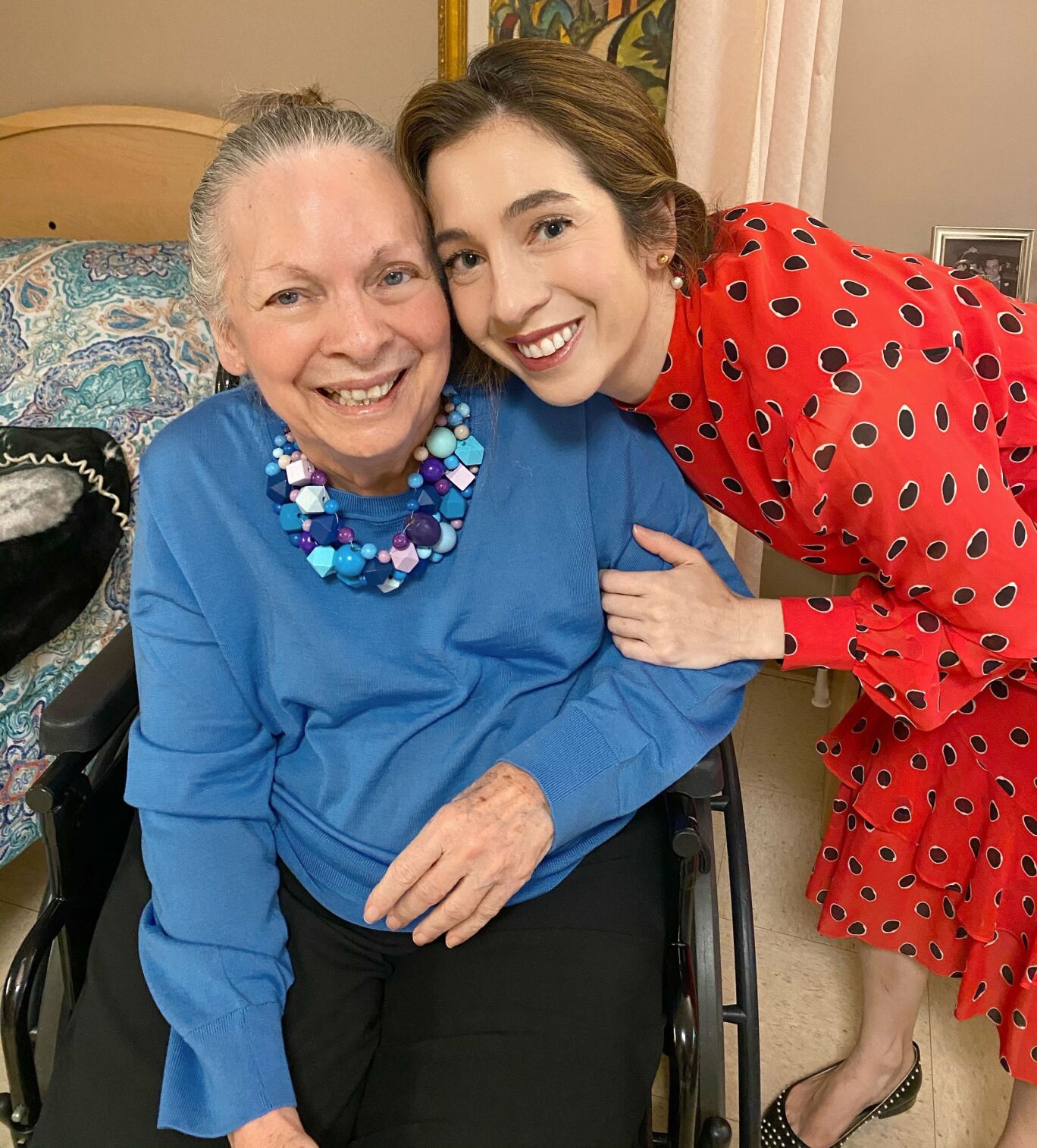 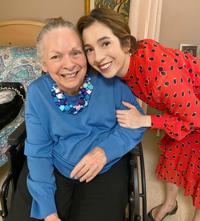 From left, Yvette Trahant enjoys a visit with her daughter, Amelie, at Fountainview Center for Alzheimer’s Disease in Brookhaven.

Yvette Trahant, second from right, gets a group hug from her children, clockwise from left, Amelie, Daniel and Alice, and granddaughter Elodie during a visit at Fountainview Center for Alzheimer’s Disease in Brookhaven.

Rob Stearns goofs off as he and his mother, Barbara “Bubsie” Stearns, eat Oreos during a previous in-person visit with her at Somerby Sandy Springs.

From left, Yvette Trahant enjoys a visit with her daughter, Amelie, at Fountainview Center for Alzheimer’s Disease in Brookhaven.

This article was updated Aug. 10 at 5:19 p.m. with corrected information and clarified quotes from Andy Stearns.

The Trahant siblings – Alice, Amelie and Daniel – have not seen their mother Yvette, who has Alzheimer’s disease, in person since the first weekend in March due to the COVID-19 pandemic.

Yvette, 73 and divorced, lives at the Fountainview Center for Alzheimer’s Disease, a Brookhaven facility that closed to the public one day after the Trahants’ last visit to protect its residents from the virus.

“She is nonverbal, so our main way of connecting with her is the physical (touch) and being in front of her and engaging with her that way,” said Alice, a Buckhead resident. “We’re able to (have) Skype virtual visits with her, but it’s just not the same for us at all, and she doesn’t really know what’s going on and is paying more attention to the person holding the phone than us.

“That’s by far the toughest part of quarantine. We’ve always been really close to our mom anyway, so to not have that physical connection with her is beyond anything I would have comprehended at this point. The physical touch and presence with her is the most important thing. To not have that, it feels more distant.”

Amelie, a Virginia-Highland resident, added, “She’s nonverbal, she’s doesn’t walk anymore and is ambulatory. For me it’s been another period of mourning. My mom was an independent mom. … She was a vibrant, outgoing, energetic person who would light up a room, and that person is no longer with us. … It’s like another piece of her has been taken from me. I work in the healthcare industry as an attorney for Emory Healthcare. So I know a lot of the reality that this isn’t going away anytime soon.

“Because it’s a terminal disease, I wonder when I will get to see her again (before she dies), and if I get to see her again soon, what state will she be in? That makes me worried if this (pandemic) goes on for another year or two years. … There’s also a bit of guilt associated with it. Does she think I’ve abandoned her? … The only connection we have with our mom left is that physical connection and that’s now gone.”

Alice and Amelie are two of four caregivers of Alzheimer’s patients the Neighbor interviewed about their struggles in not being able to touch their relatives five months since the outbreak hit the United States.

Alzheimer’s disease is the sixth leading cause of death for adults in the nation and there is no cure.

East Cobb residents Rob and Andy Stearns and their brother Neal, who lives in Rye, New York, are the main caregivers for their mother, Barbara, nicknamed “Bubsie,” who lives at the Somerby Sandy Springs retirement community. The 88-year-old, whose husband died in 1976, lives in the memory care part of the facility, which also has independent and assisted living sections. Like Yvette, Barbara can’t speak.

Though Somerby has permitted families to visit their loved ones since it locked down in early March, all of them have been through a screen or window with everyone wearing masks or outside in a tent, with social distancing in effect and no touching allowed. The Stearnses have limited the outside visits since the heat makes it uncomfortable for their mother.

“Even in a perfect scenario without COVID, tending to a dementia or Alzheimer’s disease patient is a daunting task,” Rob said. “… It’s been extremely frustrating to not check in on her, hold her hand, rub her shoulder, make sure she has things she needs like toothpaste. She has a bit of a sweet tooth, and we bring her licorice and chocolate. There’s (been) a disconnect since COVID has started.

“One can only imagine the sheer confusion of a patient who suddenly has to have people around them wearing masks so they can’t see any of the facial expressions. Whatever memory they have, there’s no way to recognize anybody. It’s terribly sad. There are people in memory care who are not at full capacity in any way. Anything that disrupts the daily routine, it’s oftentimes unsettling to them.”

Andy added, “As gone as she is in terms of her dementia phase, I’m almost thankful for (that) because a year ago, if this happened (then), she would be more cognitively aware we weren’t visiting her and didn’t have as much company. Psychologically, it’s easier for her. There’s a sadness to it, obviously, but we’re resigned to the current situation. I’m thankful she doesn’t have a clue as to what’s going on. If it was a year or two ago, it would be a struggle more on her end.”

The Trahants also said the level of dementia their mother has makes this lack of physical visits a blessing in disguise because Yvette likely doesn’t realize they temporarily can’t see her in person and/or may not recognize them.

Both families said they’re pleased with the level of care their mothers have received at their retirement homes and the precautions they’ve taken to keep the virus out. No Somerby Sandy Springs memory care residents have contracted the virus.

However, one resident and two staff members in another part of Somerby’s facility did test positive but have recovered, and two Fountainview residents and two employees contracted the virus but have recovered, according to a document from the Georgia Department of Community Health regarding COVID-19 cases in long-term care facilities.

Prior to the pandemic, the Trahants and the Stearnses would visit their mothers at least once a week. Neal would fly to Atlanta about once a month to see his mother, and Daniel, who lives in New Orleans, where the Trahants are from, would come to town almost as often.

“Every weekend we would take her out for lunch or do something fun to get her out of the nursing home environment,” Amelie said. “When this is over, will we be able to do that again? It’s hard to know what will be left of my mom.”

Alice said since her mother was diagnosed with Alzheimer’s, she’s relied on the Alzheimer’s Association’s toll-free support line (1-800-272-3900), which is open 24/7. She’s also received encouragement from other caregivers she’s met.

“When I first was affected by this, I thought I was the only one, but years later I have so many new friends who have given me support through the Alzheimer’s Association,” Alice said.

As tough as it’s been for both families, they at least have siblings to lean on.

“But I think about the people who don’t have that and don’t have a support system,” Amelie said. “We know other couples where the husband or wife is in the nursing home and every day they go there to see their spouse but can’t see them in person.”

Like the Trahants, the Stearnses have used Zoom or Facetime to talk with their mother virtually, with not a lot of success, and want to resume in-person visits as soon as possible.

“The world, none of us have seen anything like this,” Rob said. “If anything, it kind of brings to the surface the importance of eye contact. So, we’re all wearing masks. We can’t touch them. I can’t hold her hand or put my hand on her shoulder. There’s a distance created. Everyone has to deal with it, but in this situation, in a way, it’s kind of cruel.”

Pipeline construction beginning to impact Shorter, next roads to be impacted are up in the air

Committee: Annexation not a done deal, 'This is a community conversation'

Public health: Vaccines likely to be more available in the spring, switching focus from testing