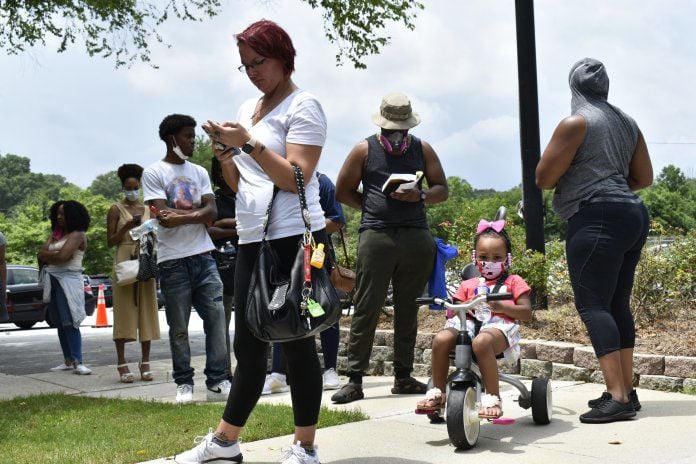 The line at Austell’s Collar Community Center in Cobb County wrapped three quarters of the way around the building Tuesday afternoon as dozens of voters sweated it out under the bright sun. Ross Williams/Georgia Recorder 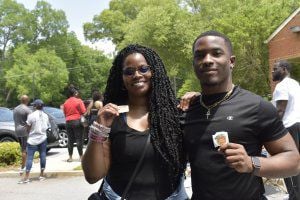 The line at Austell’s Collar Community Center in Cobb County wrapped three quarters of the way around the building Tuesday afternoon as dozens of voters sweated it out under the bright sun. Ross Williams/Georgia Recorder

Tuesday’s voting started early with lines long enough to test the will of voters and quickly gave way to partisan finger pointing, unflattering national headlines and two investigations into what went wrong.

The primetime debut of Georgia’s new $104 million voting machines came at a time when counties had fewer polling places to offer up — and fewer poll workers to staff them — and carried out time-consuming precautions meant to keep voters safe during a pandemic.

Voters in socially distanced lines stretched out of buildings all across metro Atlanta and beyond and idled in lines that were not entirely unexpected. Many voters reported trying to avoid the mayhem — and potential exposure to COVID-19 — by requesting an absentee ballot that never came.

Although much of the criticism focused on Fulton County, long waits were also reported elsewhere. At the Collar Community Center in Cobb County, for example, voters wrapped three quarters of the way around the building Tuesday afternoon as voters sweated it out under the bright sun. Some reported enduring a five-hour wait.

“I expected to wait at least two hours, but I got here at 7 o’clock, and I’m just getting out at 12:42,” said first-time voter Ali Fard, a recent high school graduate who studied elections in a government class he took last year. “I didn’t expect it to be this long.”

The doors to the Austell precinct did not even open until 8 a.m. — an hour later than required. Poll workers on scene declined to comment on the reason for the delays. The polling place was among 19 precincts that stayed open an extra hour Tuesday because of a delayed start.

Voting in Fulton, Muscogee, Chatham and DeKalb counties was also extended Tuesday night. Problems were also reported in Gwinnett County, with several precincts opening without all their voting equipment.

Aunna Dennis, executive director of Common Cause, a nonpartisan voting rights group, said Tuesday afternoon that there had been reports of precincts opening late or being understaffed, new voting machines that were not charged or did not have enough power cords, and polling locations that came up short on emergency and provisional paper ballots.

“Across the state we are hearing that there’s widespread discrepancies of management of elections,” Dennis said.

Those reported problems led to calls from influential groups, like the Metro Atlanta Chamber, for changes before throngs of voters return to the polls for November’s high-stakes election, when a presidential contest and two U.S. Senate races are on the ballot.

“We are clear: Voting is a critical way to engage in the future of our region and nation — and every vote should be cast and counted,” Katie Kirkpatrick, the chamber’s chief policy officer, said in a statement Tuesday. “The issues we’re seeing reported in metro ATL and across the state are unacceptable and should be addressed swiftly by officials in our state.”

Andrea Young, Executive Director of the ACLU of Georgia, called the election “a massive failure.”

“Countless Georgians were deprived of their sacred right to vote. Whether it is incompetence or intentional voter suppression — the result is the same — Georgians denied their rights as citizens in this democracy,” Young said.

But much of the focus turned to Fulton and DeKalb counties and quickly took on familiar partisan overtones. Even local officials from different political parties, though, agreed that there are problems, including poll workers who were not adequately trained on the new voting machines.

In DeKalb County, election officials at Cross Keys High School resorted to passing out provisional paper ballots as they worked to get the voting machines operating, just in time for Brookhaven resident Gabby Guevara to vote.

Still, she waited two hours to vote Tuesday morning. Guevara said she worries the technical equipment problems that led to long lines may discourage some people from participating in future elections.

“I think the concern now is how they’re going to push forward through the election year,” the 30-year-old said. “We have several elections coming up, so I think the question now is how are they going to organize because this is kind of the precedent.

“I think it could cause some damage and people wanting to vote” Guevara added.

GOVERNMENT RESPONSERepublican House Speaker David Ralston has ordered an investigation into the “primary election irregularities” that will be led by state Rep. Shaw Blackmon, a Bonaire Republican who chairs the House Governmental Affairs Committee.

“We are hearing anecdotes from around the state — particularly in Fulton County — this morning of unacceptable deficiencies: poll workers not being properly trained, voting equipment not working and absentee ballots not being received among other issues,” Ralston said in a statement. “Our poll workers give of their time to serve Georgians, and they do not deserve to be blamed for systemic problems beyond their control.

“The legislative branch of government has an obligation to go beyond the mutual finger-pointing and get to the truth and the real reasons underlying these frustrations and concerns,” Ralston said.

Republican Secretary of State Brad Raffensperger said midday Tuesday that his office would also investigate problems but limited the scope to Fulton and DeKalb counties despite the problems in other metro counties and on the coast.

“The voting situation today in certain precincts in Fulton and Dekalb counties is unacceptable,” Raffensperger said.

“Obviously, the first time a new voting system is used there is going to be a learning curve and voting in a pandemic only increased these difficulties. But every other county faced these same issues and were significantly better prepared to respond so that voters had every opportunity to vote,” he said.

Atlanta’s Carter Center needs to send a team of election observers to determine the legitimacy of Georgia’s November election, Nathaniel Smith said after he and his wife Alyshia waited four hours to vote in Tuesday’s primary. The line across Hank Aaron drive stretched around the blocks before reaching the former Fanplex arcade. John McCosh/Georgia Recorder

Late Tuesday afternoon, Nathaniel Smith of Summerville ended his four-hour wait to vote at the old Fanplex arcade. He said he wasn’t surprised it took so long to vote because he believes the state intentionally makes it harder to cast a ballot in minority communities.

“To be completely transparent, I did expect it in light of the (Kemp) administration’s past efforts that have been initiated to suppress voters,” Smith said. “But to be stuck in it was something very, very frustrating.”

After Tuesday’s frustration, what would Smith like to see happen in November when much greater turnout is expected?

“My hope would be that an institution like the Carter Center would turn away briefly from its global affairs and began to focus more domestically on this election,” Smith said.

Katie Kirkpatrick said she’s “humbled and excited and proud” to lead the Metro Atlanta Chamber, an organization that dates back to 1859.

DeKalb runoffs are ahead in Georgia House, county commission and judicial races

DeKalb County voters will have five races to decide on in the Aug. 11 primary runoff election after candidates in those campaigns did not win …