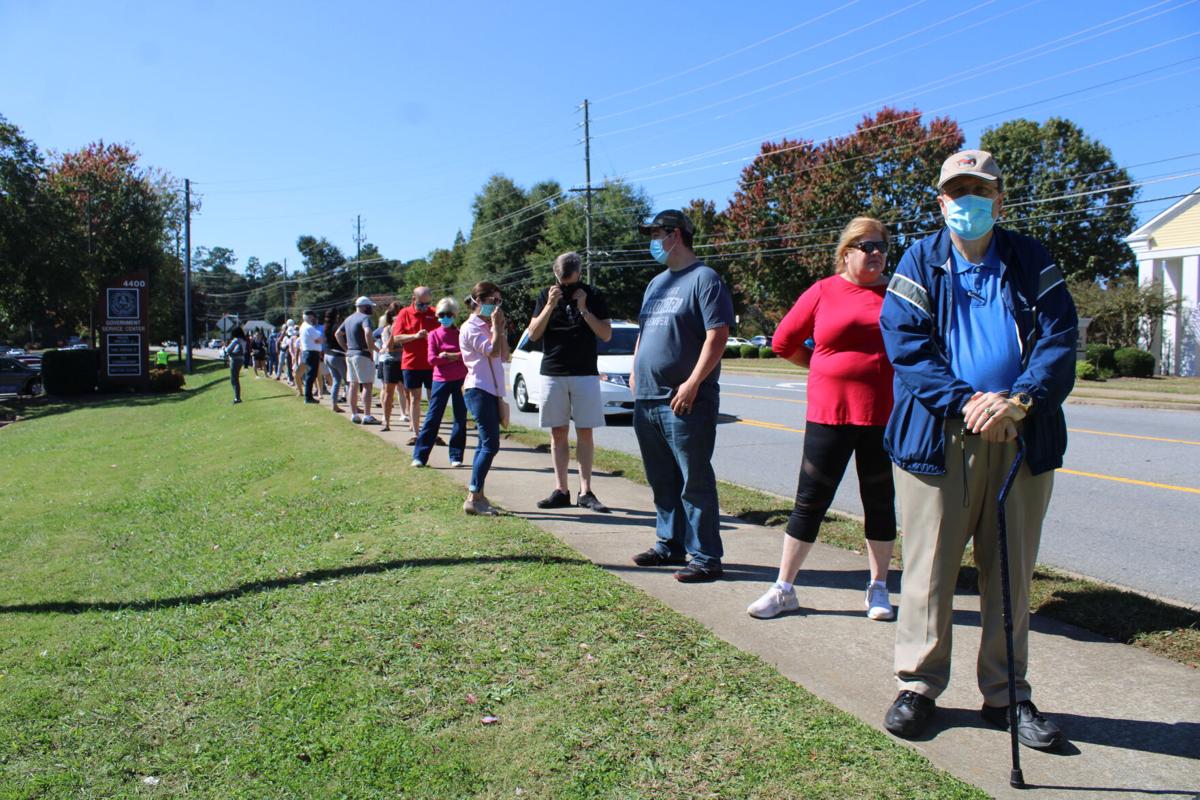 Voters wait on the sidewalk before casting their ballots at the East Cobb Government Service Center on Oct. 14. 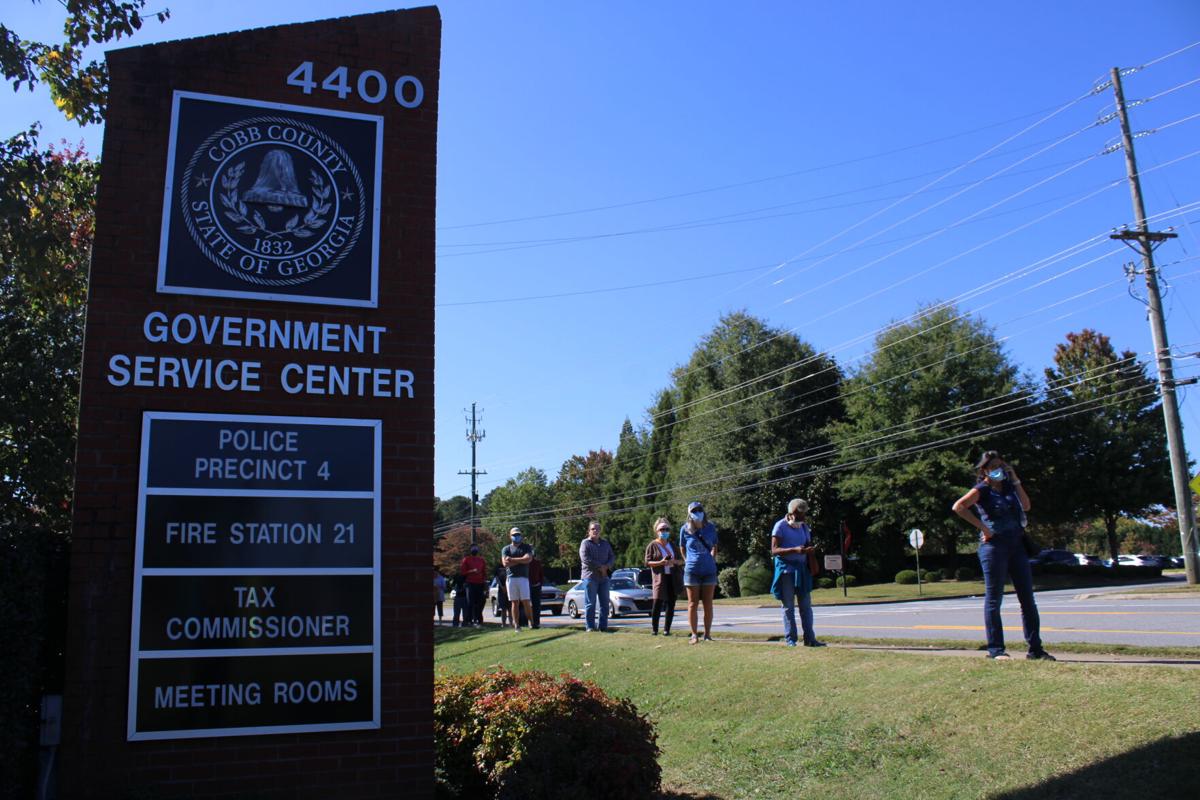 Voters wait in line on the sidewalk outside the East Cobb Government Service Center on Lower Roswell Road on Wednesday, Oct. 14. 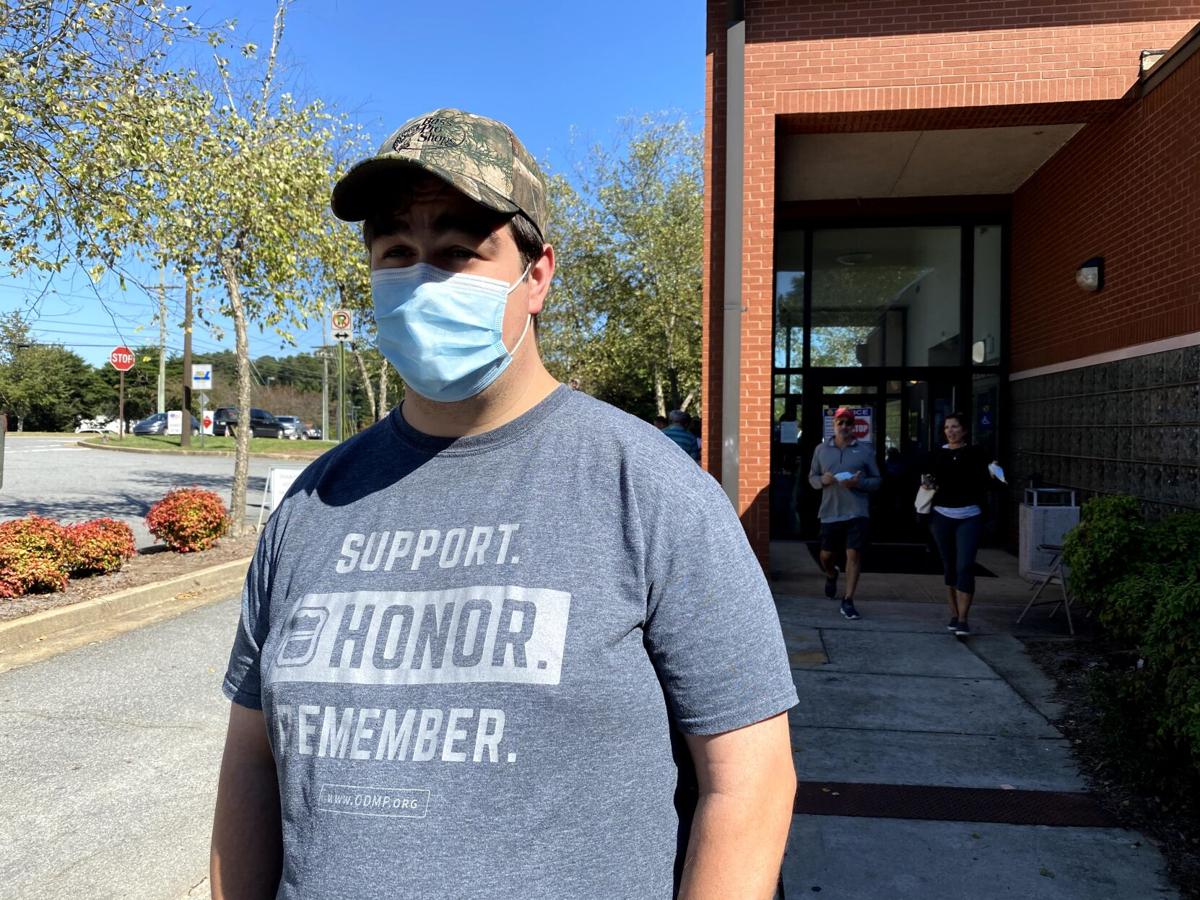 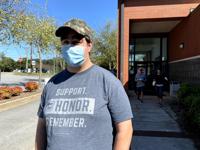 Benjamin Davis, 22, said he waited in line for about 45 minutes to cast his ballot at the East Cobb Government Service Center on Wednesday, Oct. 14. 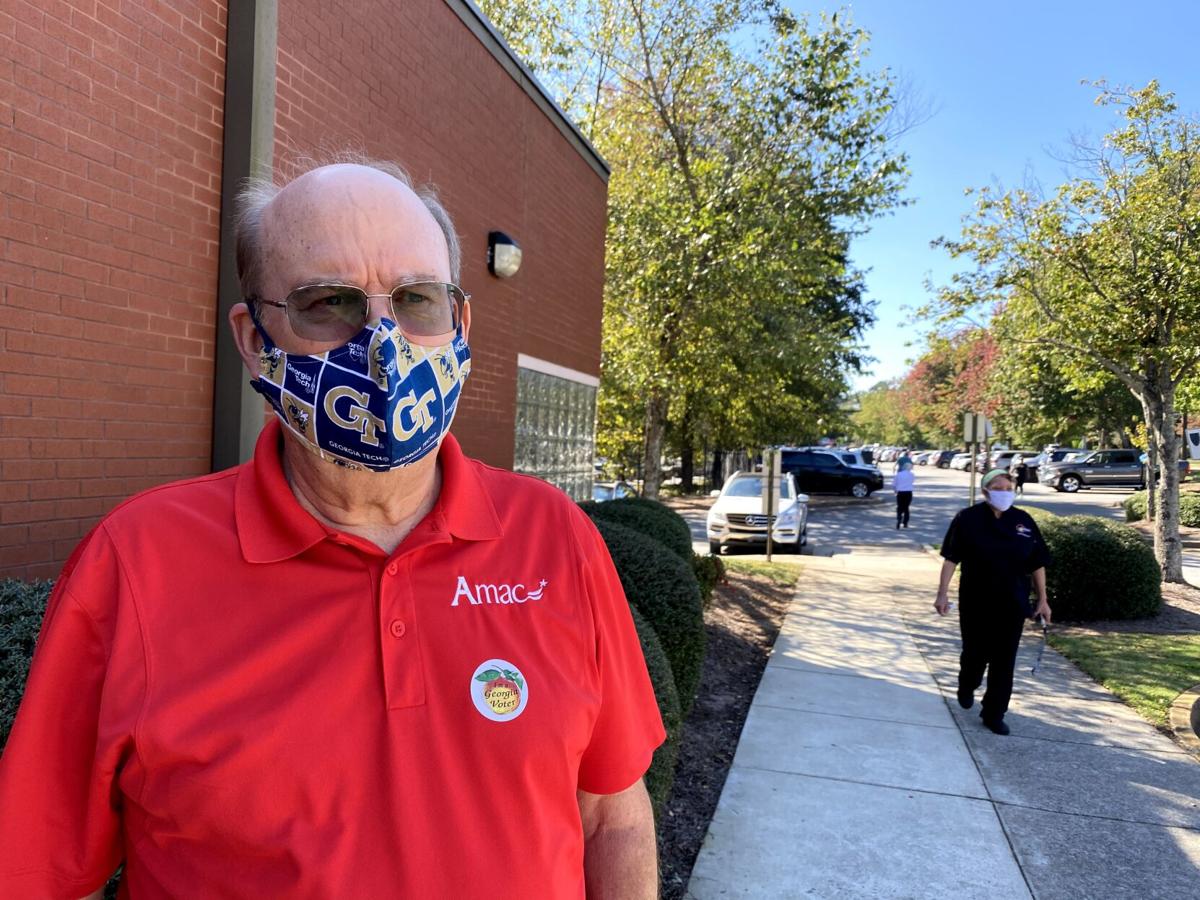 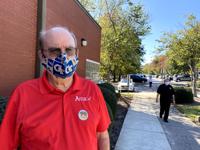 Marietta resident Gary Henderson said he considered voting by mail, but ultimately decided to cast his ballot in person at the East Cobb Government Service Center on Wednesday, Oct. 14. 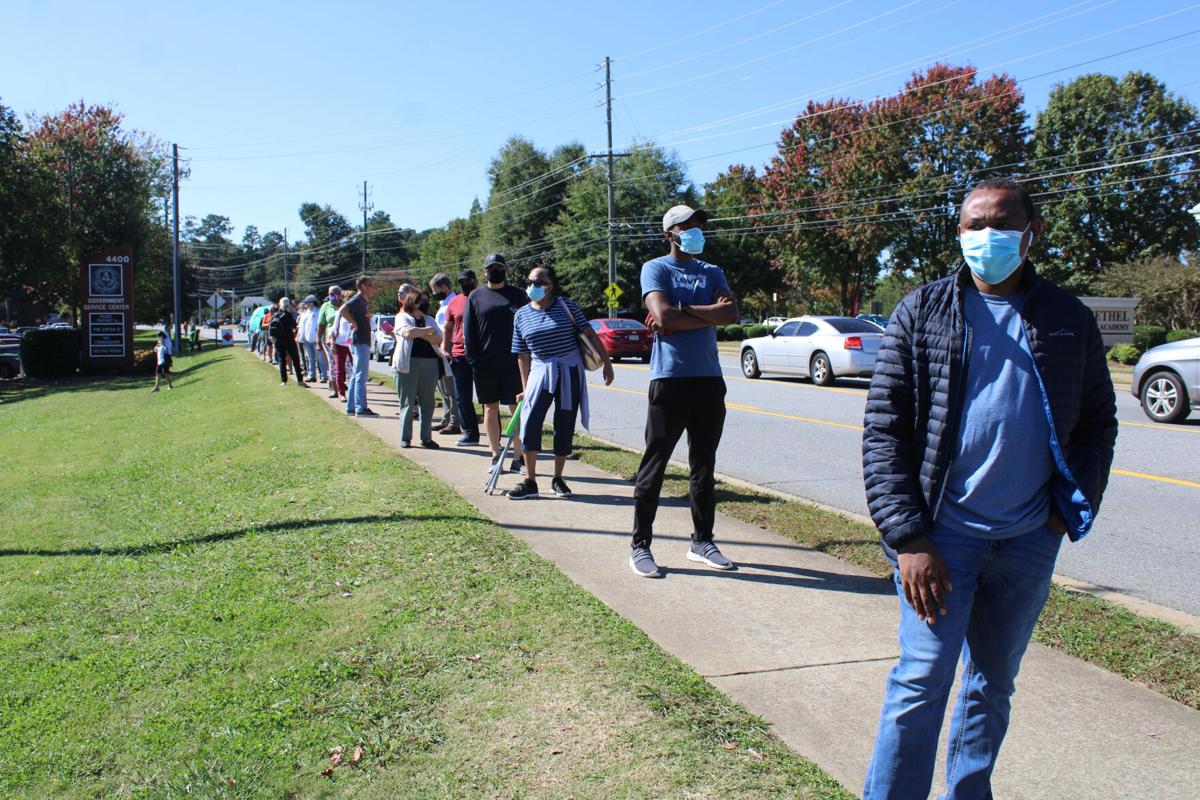 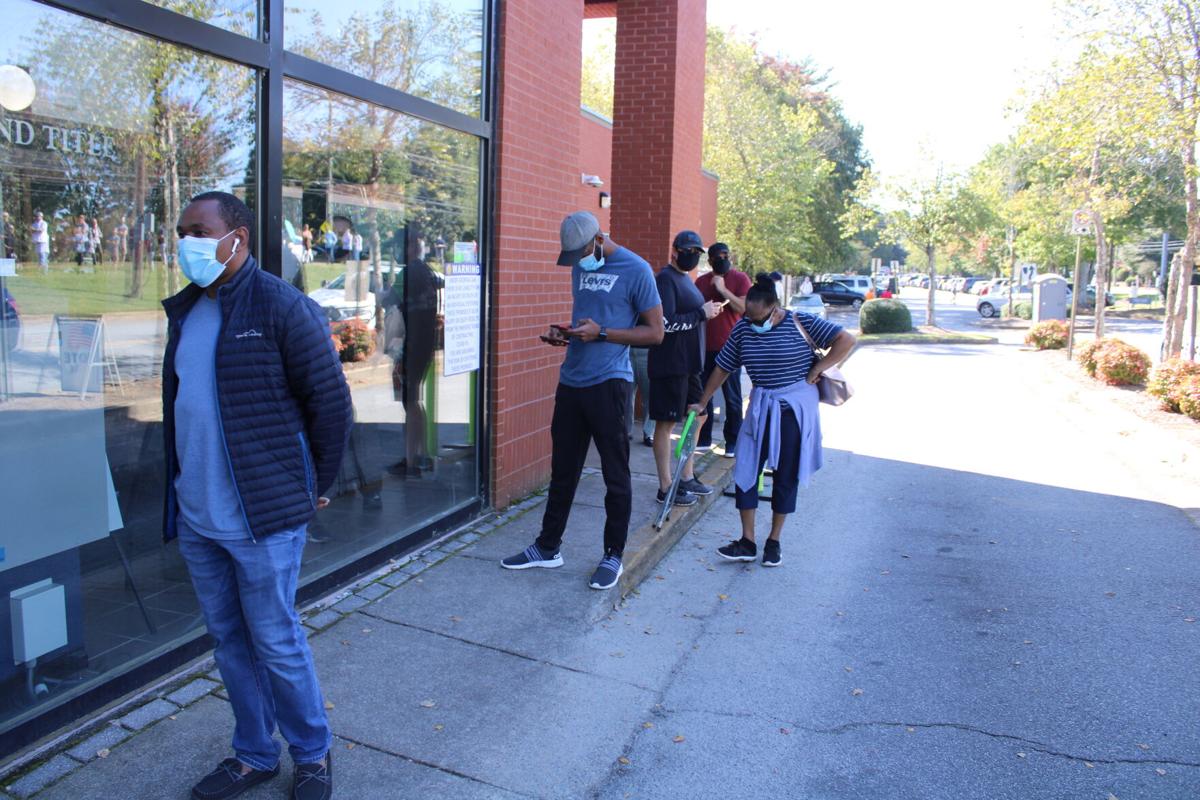 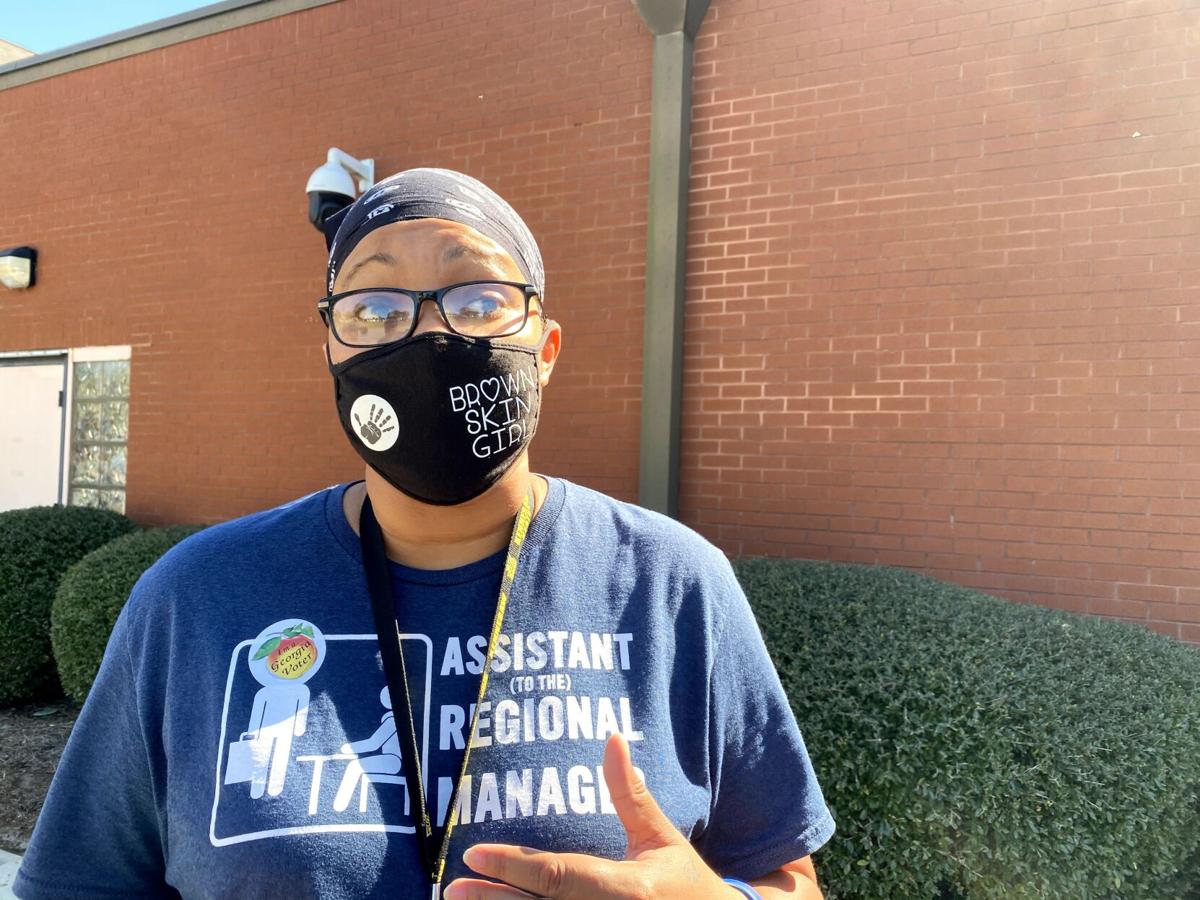 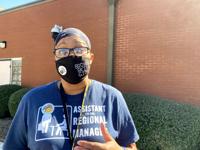 Marietta resident Shakeema Davis said she waited in line for about 15 minutes to cast her ballot at the East Cobb Government Service Center on Wednesday, Oct. 14.

Voters wait on the sidewalk before casting their ballots at the East Cobb Government Service Center on Oct. 14.

Voters wait in line on the sidewalk outside the East Cobb Government Service Center on Lower Roswell Road on Wednesday, Oct. 14.

Benjamin Davis, 22, said he waited in line for about 45 minutes to cast his ballot at the East Cobb Government Service Center on Wednesday, Oct. 14.

Marietta resident Gary Henderson said he considered voting by mail, but ultimately decided to cast his ballot in person at the East Cobb Government Service Center on Wednesday, Oct. 14.

Marietta resident Shakeema Davis said she waited in line for about 15 minutes to cast her ballot at the East Cobb Government Service Center on Wednesday, Oct. 14.

Voters who came to the East Cobb Government Service Center Wednesday afternoon were pleasantly surprised by the lines.

“From what I was hearing earlier, I was expecting it to be more like two or three hours,” said Marietta resident Benjamin Davis, 22. “I was just driving down the road and saw that the line was short and figured I might as well go vote.”

He could hardly have come at a better time.

Lines are expected to improve throughout the week, according to Cobb elections department head Janine Eveler. But as election day approaches and interest builds, lines will start getting longer early next week, she warned.

Reducing wait times has been a priority of Eveler’s since the June 9 primary, when long lines in Cobb and other metro Atlanta counties led to cries of “voter suppression” from state Democrats.

South Cobb Commissioner Lisa Cupid, the lone Democrat on the Cobb Board of Commissioners, echoed those comments at a board meeting Tuesday.

“When people talk about voter suppression it’s these type of events that they refer to,” she said, referring to Monday’s lines.

Eveler said Wednesday her department was limited in the number of early voting locations it could open by the dearth of experienced poll workers who could manage them.

“We’re not necessarily having trouble finding the clerks and the temp agency people and the lower-level worker bees, but it’s finding people that have expertise to manage it,” she said.

Two other factors worked against local elections departments across the state Monday, Eveler added. First were troubles with the state’s registration system, which is used to verify the identity and registration of voters who come to the polls.

“The bottleneck has been in the check-in process,” she said.

Second was the fact that Monday was Columbus Day, a state holiday. That fewer potential voters had to work may have contributed to the lines, she said.

Speaking at the Board of Commissioners meeting Tuesday, Cupid suggested long wait times could have been avoided had her colleagues approved the Board of Elections’ request of $200,000 to mail an absentee ballot application to every registered voter in the county.

“We knew since the primary that this was going to be a record turnout election, and we could have done something about it,” Cupid said. “I wonder how much it cost for our poll workers who had to stay late, some to 10 o’clock at night, to process the number of our citizens that were in line.”

Eveler said such a move could have increased the use of absentee ballots in the general election. But she “wasn’t heartbroken” by commissioners’ decision, she added, due to the state’s development of a new, online absentee ballot application tool that has made applying “even easier” than completing a mailed ballot request form.

Cupid wasn’t the only county commissioner to address the election Tuesday. Board Chairman Mike Boyce — whom Cupid is challenging in the general election — lamented some voters’ mistrust of mail-in voting.

“It’s unfortunate that in this day and age, we have politicized the voting process,” Boyce said. “The political parties on both sides are to blame for this. They have created the narrative that the various venues we’re using to vote, not all of them can be trusted. … This board a couple months ago approved over $300,000 to put camera systems over 16 drop boxes in this county. And we still have people who don’t believe those drop boxes are trustworthy. This is extraordinary.”

“What is kind of in the news about absentee, and what the controversy, I guess is, is really related to a process that we don’t even have in Georgia, and that’s where the government sends a ballot out to every registered voter, whether they’re still at that location or not,” Eveler said. “The concern is that somebody who now lives at that location is going to use that ballot. Now I could talk about why that won’t work either, but that’s not relevant in Georgia, because you have to apply for a ballot.”

She asked that voters who requested an absentee ballot complete their ballot and leave it at one of the drop boxes, rather than canceling the ballot to vote in-person. Canceling a ballot — especially if a voter hasn’t brought it with them to the polling location — is time-consuming and slows down the line, Eveler said.

Some who voted at the East Cobb Government Service Center Wednesday afternoon said they expected to wait several hours to cast a ballot, but decided to vote early anyway to avoid even longer lines on election day.

“I listened to Secretary of State (Brad) Raffensperger talk about the large turnout with the long lines, and he suggested we vote early,” Gary Henderson, who votes in every election, said. “I thought this was better.”

Marietta resident Glenda Martin said she only had to wait 20 minutes to cast her ballot, which was “way faster” than she expected.

“It was really smooth,” she said. “Everything was great. They had sanitizer everywhere. Everybody stayed 16 feet apart.”

Although several locations had an estimated wait time of about two hours Wednesday morning, times improved throughout the day. At 6 p.m. Wednesday, the expected wait at locations in west and north Cobb had dropped to a half hour or less.

Critics of the Cobb elections department’s handling of the primary said wait times June 9 were longest in south Cobb, which has the county’s largest share of minority voters.

Although the South Cobb Regional Library had consistently long wait times Wednesday, the Riverside EpiCenter in Austell performed relatively well, with wait times hovering at about an hour throughout the day.

During the first day of early voting in 2016, the Cobb elections department had two voting locations and processed a total of 3,700 people, Eveler said. (Antiquated but simpler voting machines meant that each location could process more voters, she added.)

Meanwhile, more than 50,000 absentee ballots have already been returned by Cobb voters, according to the election department’s website.

The legal deadline to request an absentee ballot is Oct. 30, but Eveler recommended that voters apply no later than Oct. 27 in order to ensure that it reaches them in time.