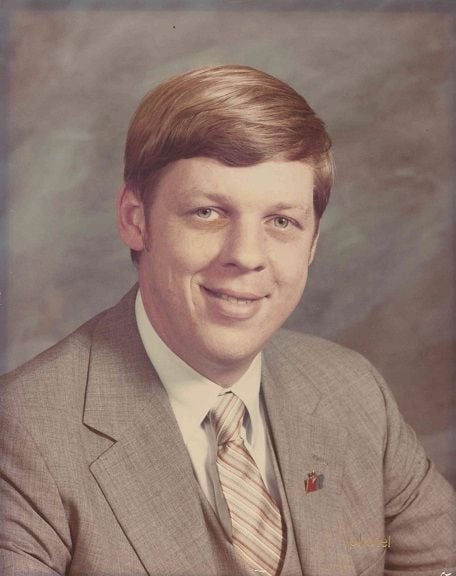 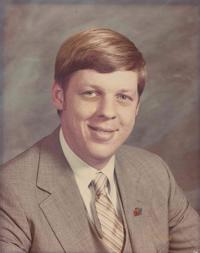 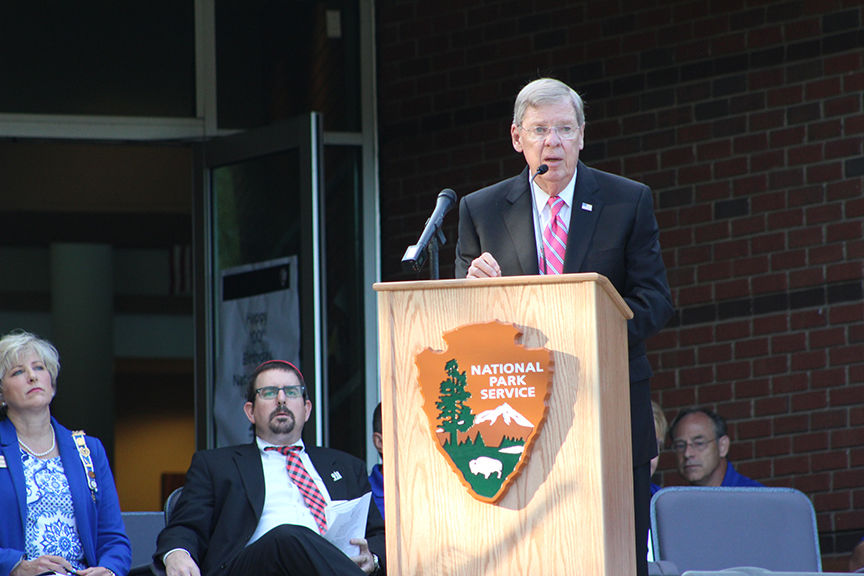 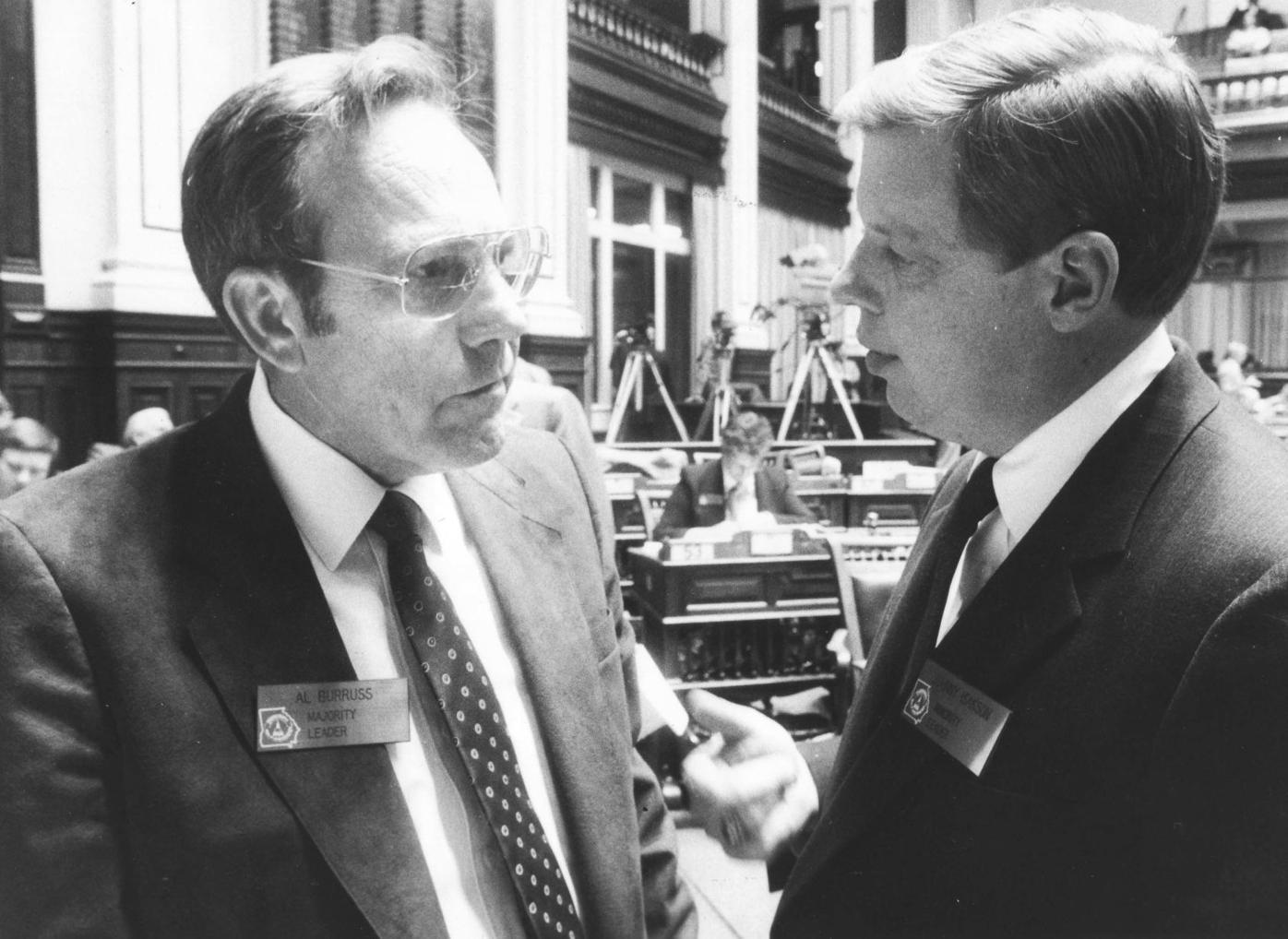 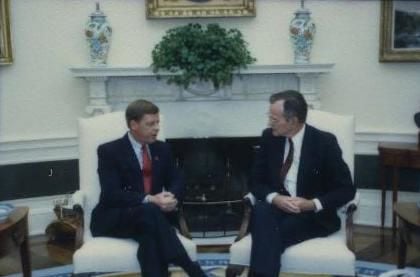 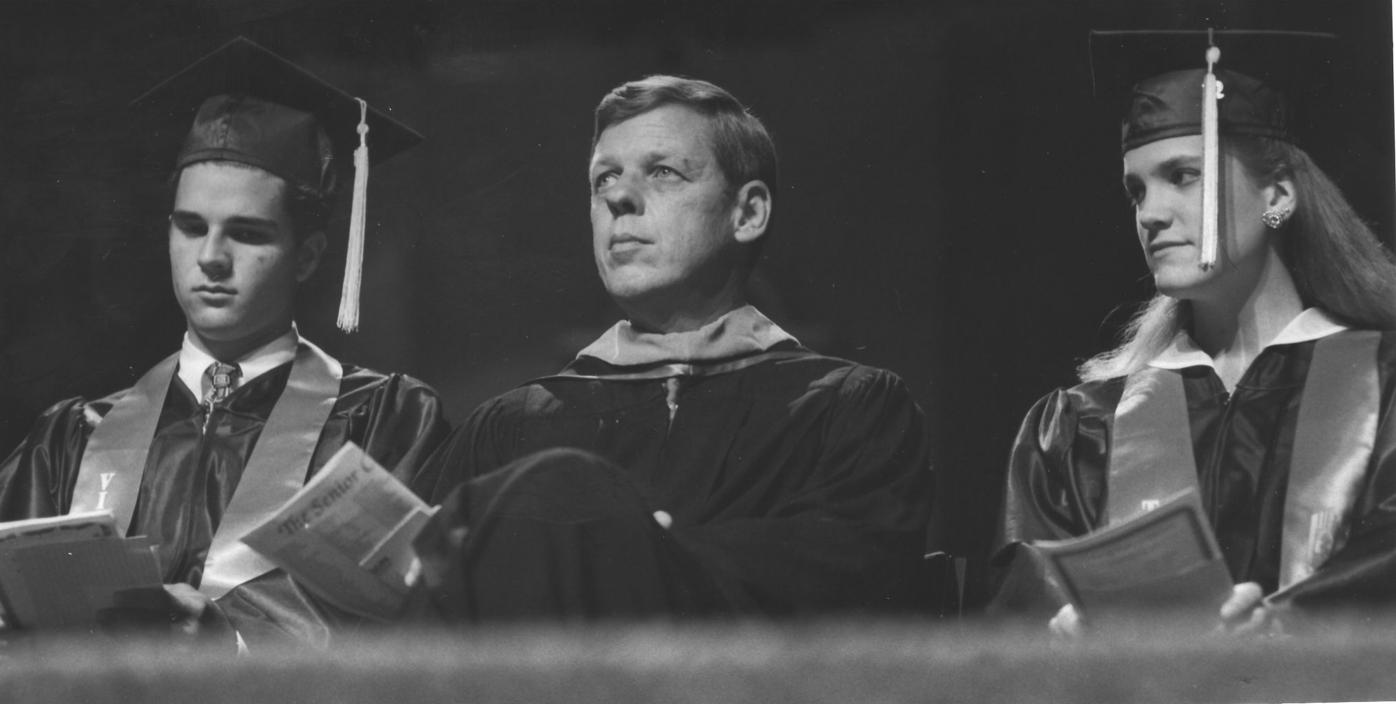 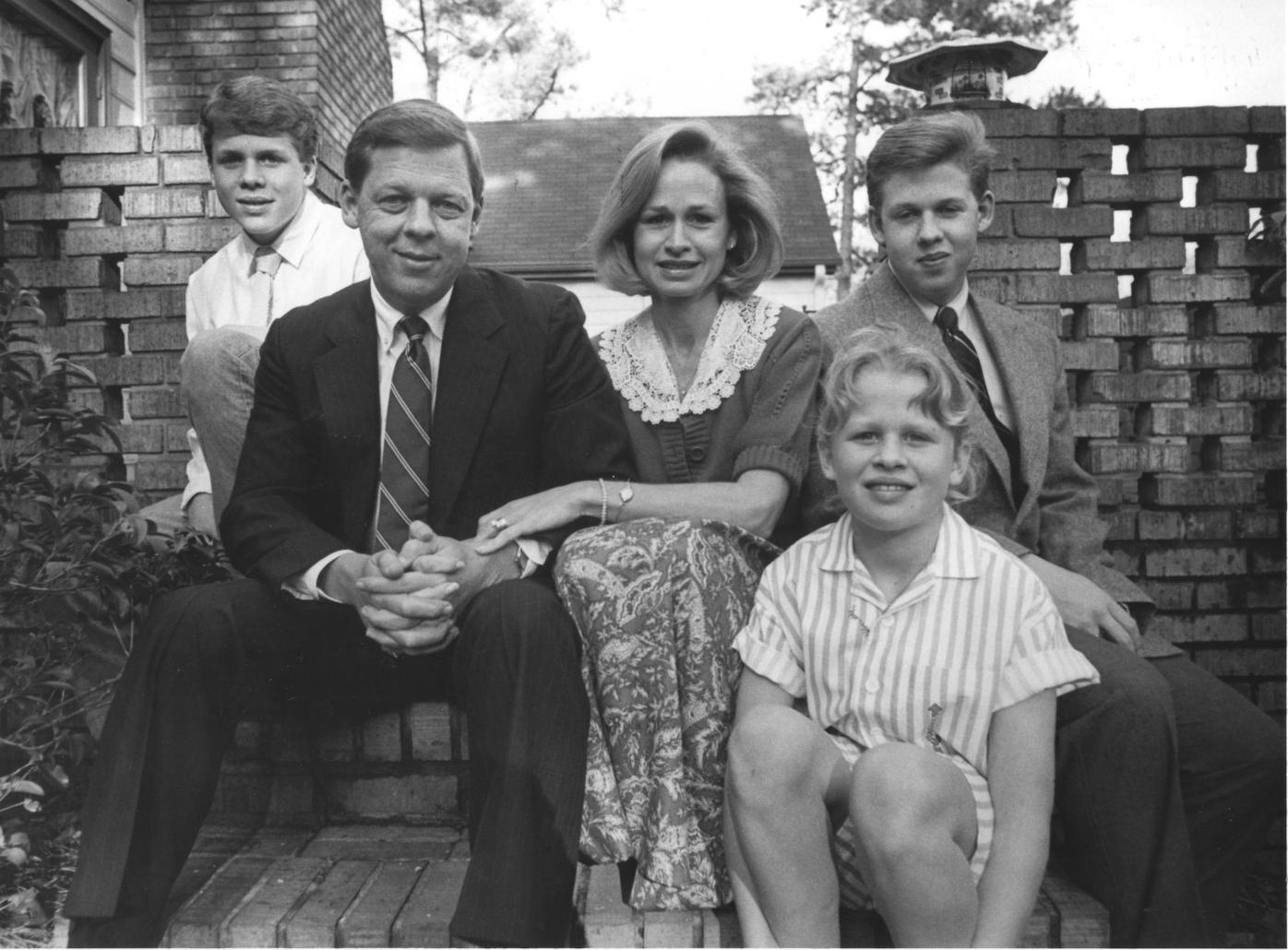 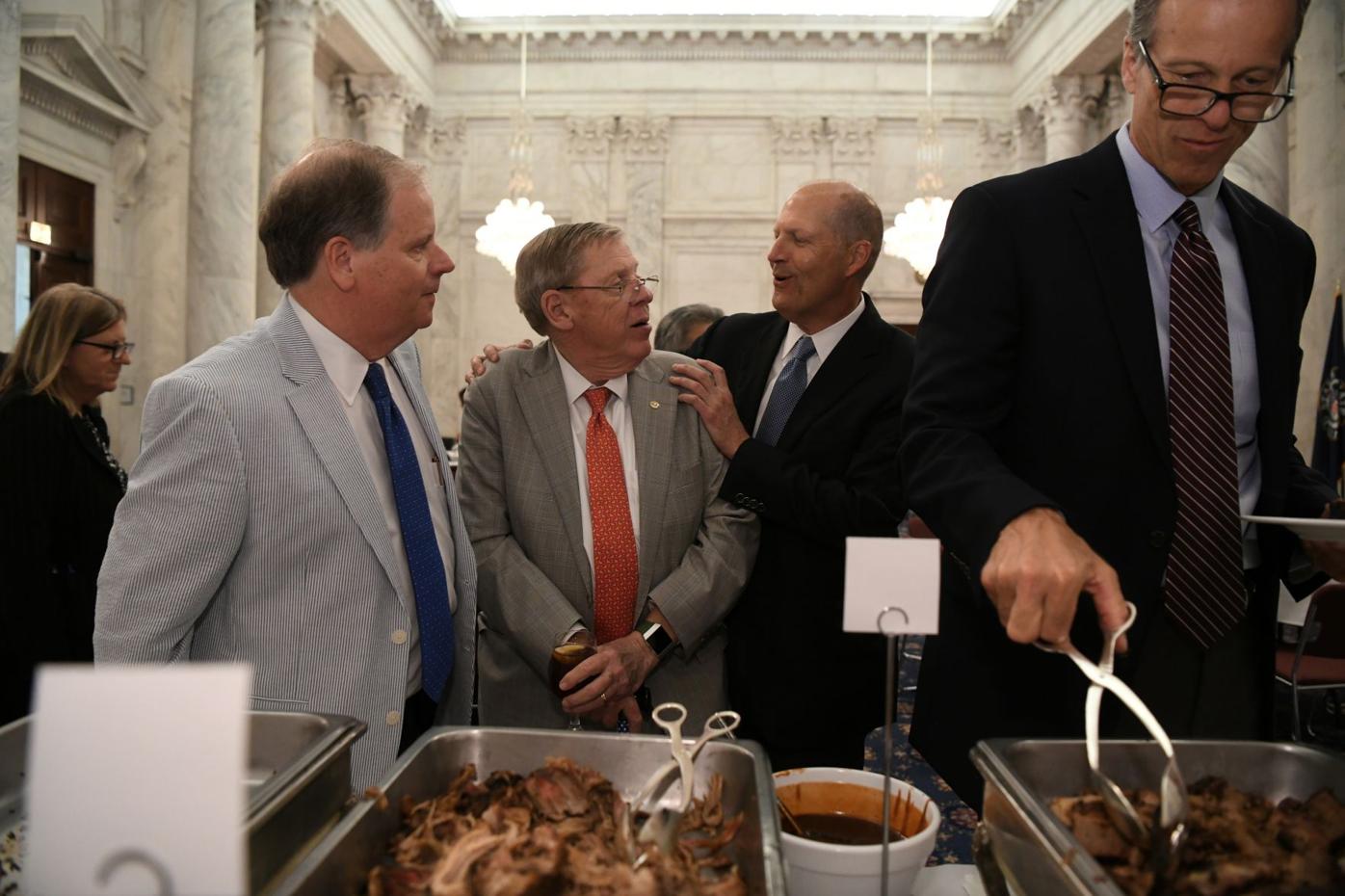 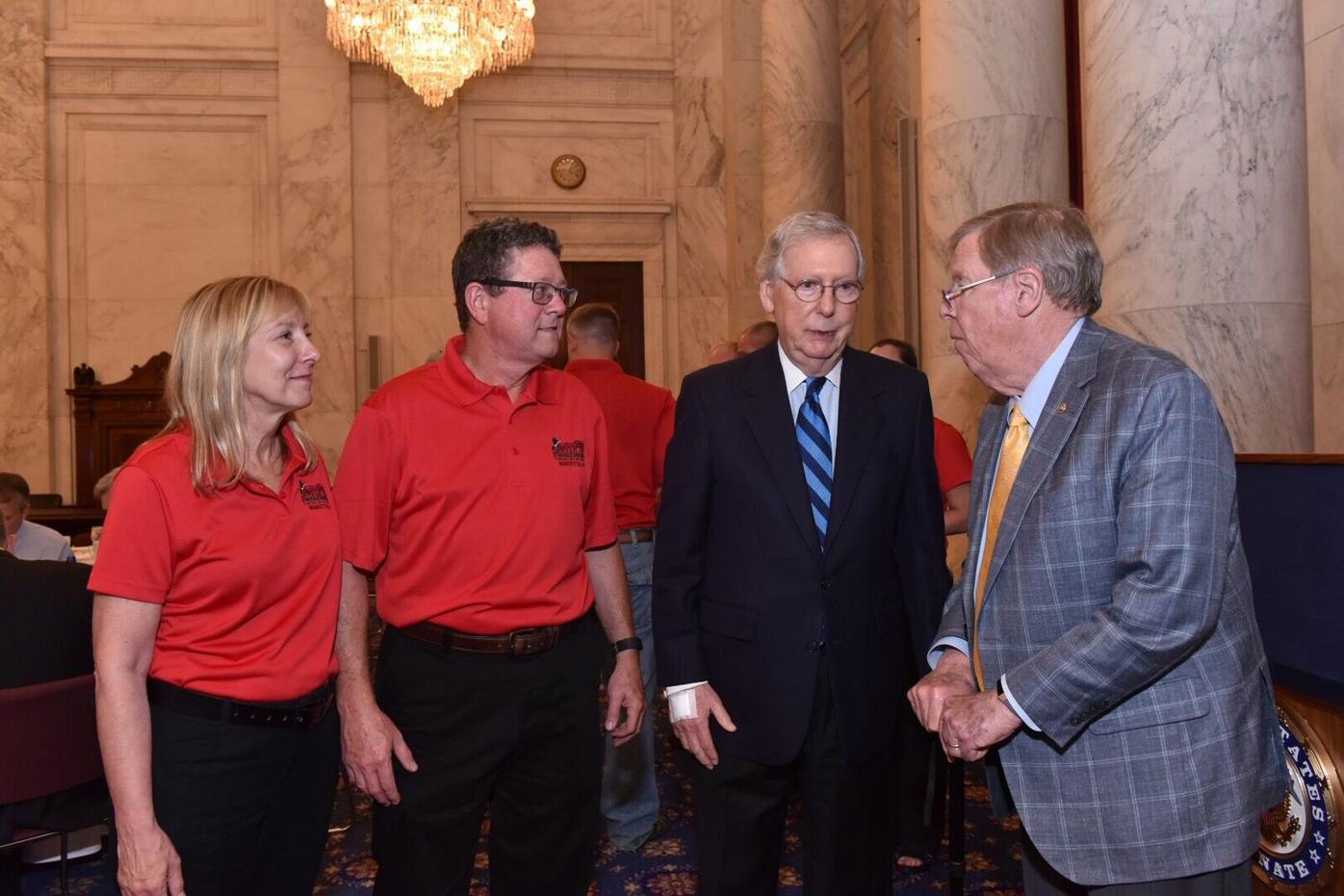 U.S. Sen. Johnny Isakson, R-Georgia, hosting his tenth annual bipartisan barbecue lunch for U.S. senators and staff from both sides of the political aisle. This year’s luncheon was catered by South 40 Smokehouse, family-owned and operated by Dale and Tracey Thornton of Marietta.

U.S. Sen. Johnny Isakson, R-Georgia, hosting his tenth annual bipartisan barbecue lunch for U.S. senators and staff from both sides of the political aisle. This year’s luncheon was catered by South 40 Smokehouse, family-owned and operated by Dale and Tracey Thornton of Marietta.

There will be huge shoes to fill when U.S. Sen. Johnny Isakson, R-Ga., leaves office at the end of the year.

Isakson, 74, is considered Georgia’s most senior and experienced current legislator with an impressive and lengthy political career dating back 45 years to 1974.

Isakson announced his retirement Wednesday morning, saying he notified Gov. Brian Kemp of his plan to step down at year’s end.

“After much prayer and consultation with my family and my doctors, I have made the very tough decision to leave the U.S. Senate at the end of this year,” Isakson said. “I am leaving a job I love because my health challenges are taking their toll on me, my family and my staff.”

Kemp and his wife, first lady Marty Kemp, issued statements in regard to Isakson’s resignation Wednesday.

“No one embodies the heart and soul of Georgia more than Johnny Isakson,” Gov. Kemp said. “Our state and country have been immeasurably blessed by his leadership in the Georgia General Assembly, U.S. House and U.S. Senate.”

Gov. Kemp says Isakson’s list of accomplishments on behalf of the state is “long and deserved” but more importantly, he is a “true gentleman, a fighter for his constituents, a trusted advocate for our nation’s veterans and one of the greatest statesmen to ever answer the call of service to our country.”

“Marty and I are forever grateful for the friendship that Johnny and Dianne have shown us over the years and wish them the very best in the years to come,” Gov. Kemp said, adding that he will appoint Isakson’s replacement “at the appropriate time.”

Marty Kemp described Isakson as a lifelong family friend who served alongside her father, the late Bob Argo, in the Georgia General Assembly.

“Georgia is incredibly blessed to have had Johnny on our side for all these years,” she said. “Our family is praying for Johnny and Dianne as they embark on this new journey.”

According to his Senate biography, Isakson was born in Atlanta on Dec. 28, 1944, and graduated from the University of Georgia in 1966 before serving in the Georgia Air National Guard until 1972.

Isakson’s biography states he opened the first Cobb County office of his small, family-owned real estate business, Northside Realty, in 1967 and spent 20 years as president of the firm, growing it into one of the largest independent real estate brokerage companies in the Southeast and nationwide.

He was elected a member of the Georgia General Assembly in 1976 and served there until 1990 when he unsuccessfully campaigned for election as governor.

Isakson was elected in 1999 to the U.S. House for the first of three terms.

In 2004, he was elected to his first term in the U.S. Senate and he won reelection in 2010 and 2016. In the latter race he won 54% of the vote and in early 2018 he told a crowd gathered at an Atlanta Press Club event that he planned to run for re-election in 2022, for which paperwork had already been filed allowing him to raise funds for his next campaign.

Since becoming chairman of the Senate Committee on Veterans’ Affairs in 2015, Isakson has pushed for more transparency within the agency and benefit reforms for veterans’ health care.

In 2017 and 2018, under Isakson’s leadership, the committee passed 25 pieces of legislation, which were all signed into law, including the flagship Maintaining Internal Systems and Strengthening Integrated Outside Networks (MISSION) Act, containing reforms to improve the VA’s current healthcare delivery system and help provide veterans with more choice and fewer barriers to care.

The MDJ presented Isakson with the Cobb County Citizen of the Year Award in 1988. At the time, Isakson’s real estate company had more than 1,000 agents, 28 offices and $1.4 billion in annual sales, the MDJ reported.

In 2017, Isakson was named East Cobb Citizen of the Year at a Cobb Chamber of Commerce breakfast where he was celebrated by a who’s who of local business leaders, elected and appointed officials and members of the East Cobb Area Council.

Then-Cobb Chamber President David Connell described Isakson as “the definition of a statesman and a public servant.”

At the time, Isakson’s wife, Dianne, said her husband had enjoyed their almost 50 years in Cobb and being involved in the county’s growth and development.

Cobb Commissioner JoAnn Birrell said Isakson was long overdue to receive the award, commenting at the time he’d done so much for the county, Georgia and the entire nation.

“I can’t think of a finer, more deserving person,” Birrell said at the time.

In accepting the honor, Isakson said Cobb was the greatest county in Georgia and he was proud to call it home.

“It’s where I raised my family, built my business and go to church,” he said at the time. “This is one of the best honors I can think of, and I appreciate it tremendously.”

State Sen. Kay Kirkpatrick, R-east Cobb, has called Isakson one of her personal heroes, citing his ability to bring people together and face issues with common sense.

This May, Isakson led a Congressional delegation to Normandy in France to honor the heroes who paid the ultimate price on D-Day.

“As chairman of the Senate Committee on Veterans’ Affairs, Memorial Day is personal for me, and it reminds me of the cost of freedom,” Isakson said a week before the trip. “I encourage everyone to join me this Memorial Day in reflecting on the sacrifice of our U.S. service members. Without the selfless devotion of our armed forces, we would not be living in the greatest country on the face of this Earth.”

One of Isakson’s most popular annual events is the luncheon he hosts in Washington for the entire Senate, uniting both Republican and Democratic members through a shared love of Southern food.

Marietta chef and restaurant owner Dale Thornton, a 30-year friend of Isakson’s, has been involved in almost every annual luncheon put on by the senator going back 11 years.

Thornton was saddened, but not surprised, to learn of Isakson’s retirement announcement, knowing the health issues he has faced for years now.

“Johnny is a true statesman in a time when there’s very few left,” Thornton told the MDJ Wednesday. “He tries to be bipartisan as much as possible and do what is right for the people, the state and the nation.”

Thornton recalls being asked, along with his team of luncheon helpers, to watch Isakson speak in the Senate during this year’s event in June, when Isakson publicly acknowledged their contributions in the chamber, claiming Thornton’s South 40 Smokehouse has the best rub, smoke, tenderness and temperature of any barbecue in the country.

Thornton says Isakson’s public recognition of his team’s efforts is a classic example of how the senator often goes above and beyond, and is something he’ll never forget.

“There are givers and takers in this world and Johnny definitely understands and embraces that it’s better to give than to receive. He never looks for credit for himself, he’s a very humble man,” he said.

Dr. Kerwin Swint, an author, commentator and award-winning professor of political science at Kennesaw State University, says Isakson stands out among current elected officials for his bipartisan approach and admiration from all, regardless of their political persuasion.

“He’s been a fixture of Georgia politics for decades and helped build up the Republican party in the late 20th century,” Swint told the MDJ on Wednesday. “He’s got a long legacy of building and success and he’s really known for his integrity.”

Swint says Isakson, affectionately known as ‘Gentleman Johnny,’ is the opposite of pushy legislators, preferring instead to be cordial and let ego take a back seat.

“He’s someone who is unafraid to be different, to lead and to criticize when necessary and who has built a real following in both parties. He’s not into power politics, he just wants to do a good job and help people, he’s been reliable, and the bipartisan admiration for him is a little different in this day and age, no question about it.”

78 photos of U.S. Sen. Johnny Isakson through the years

U.S. Sen. Johnny Isakson, R-Georgia, announced on Wednesday that he will leave office at the end of this year, three years before his term ends.

MARIETTA — Gov. Brian Kemp is inviting expressions of interest for the replacement of U.S. Sen. Johnny Isakson, R-Ga., who will retire mid-ter…

Can we forward this article to Ruth B. Ginsburg?

GBI: Georgia man arrested for elder abuse and slaying of his grandfather