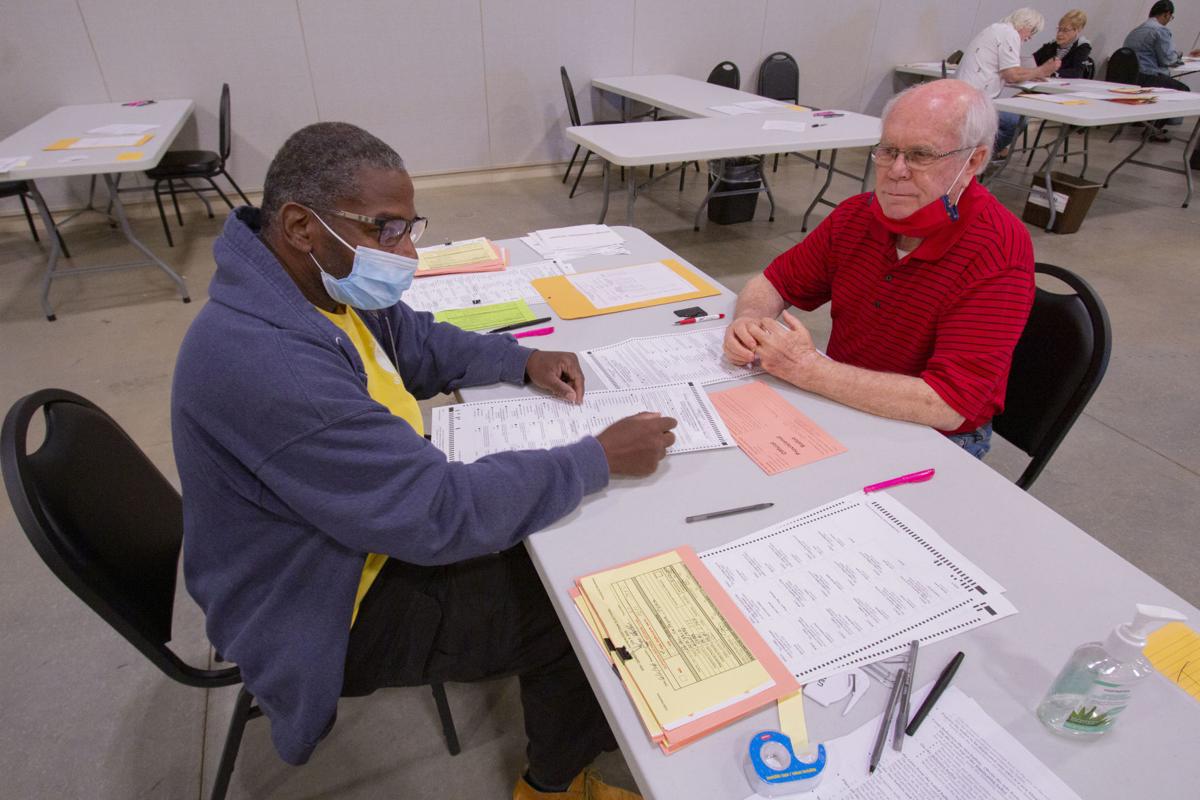 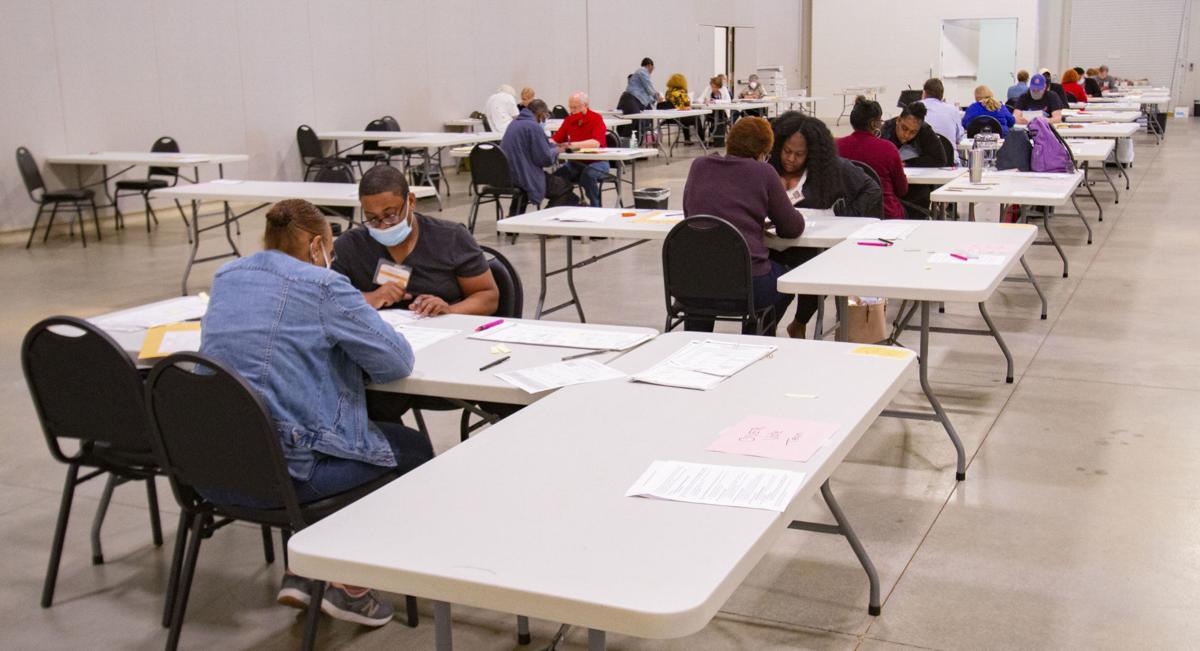 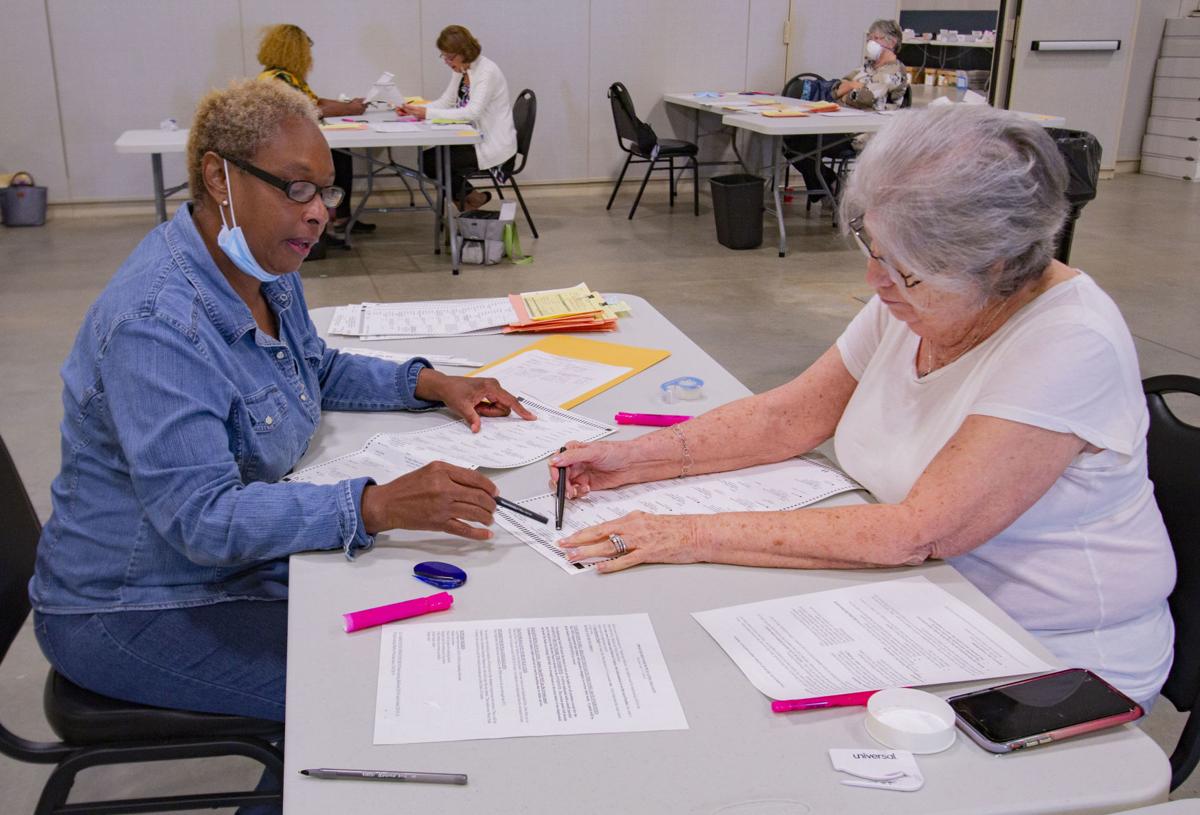 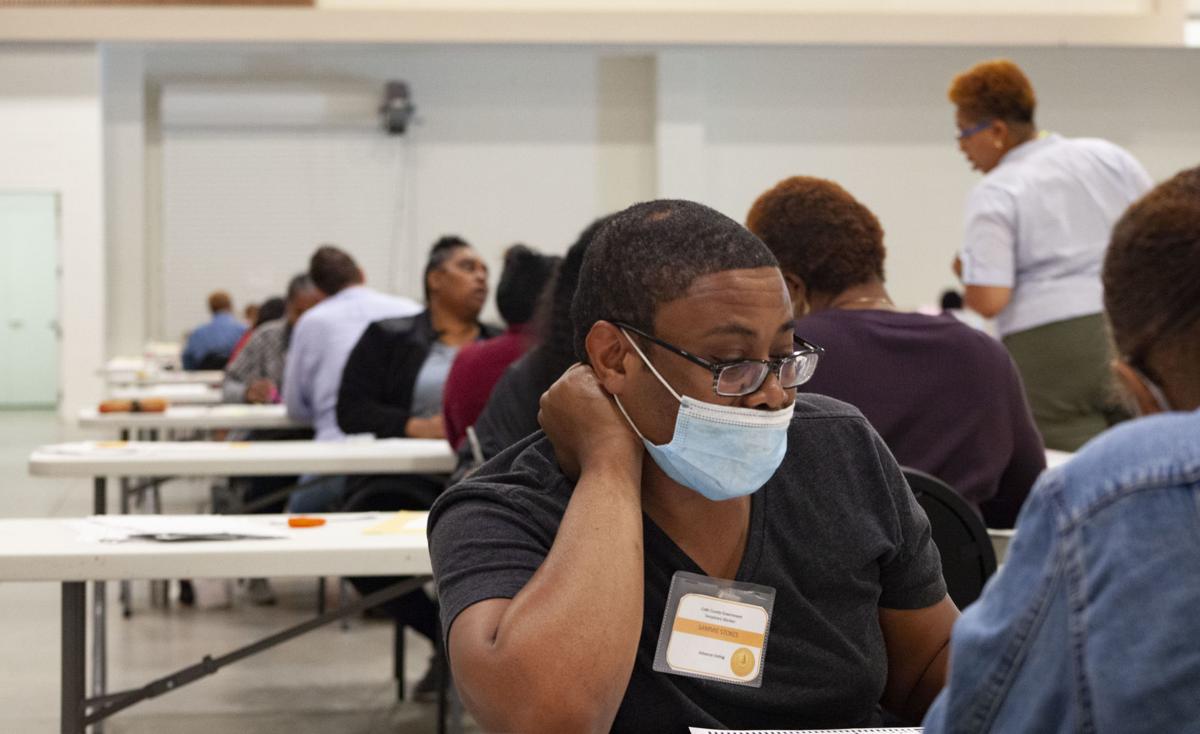 Volunteer Sam Stokes and dozens of other elections workers and staff from county departments including parks and libraries work through remaining ballots at Jim Miller Park on Tuesday. 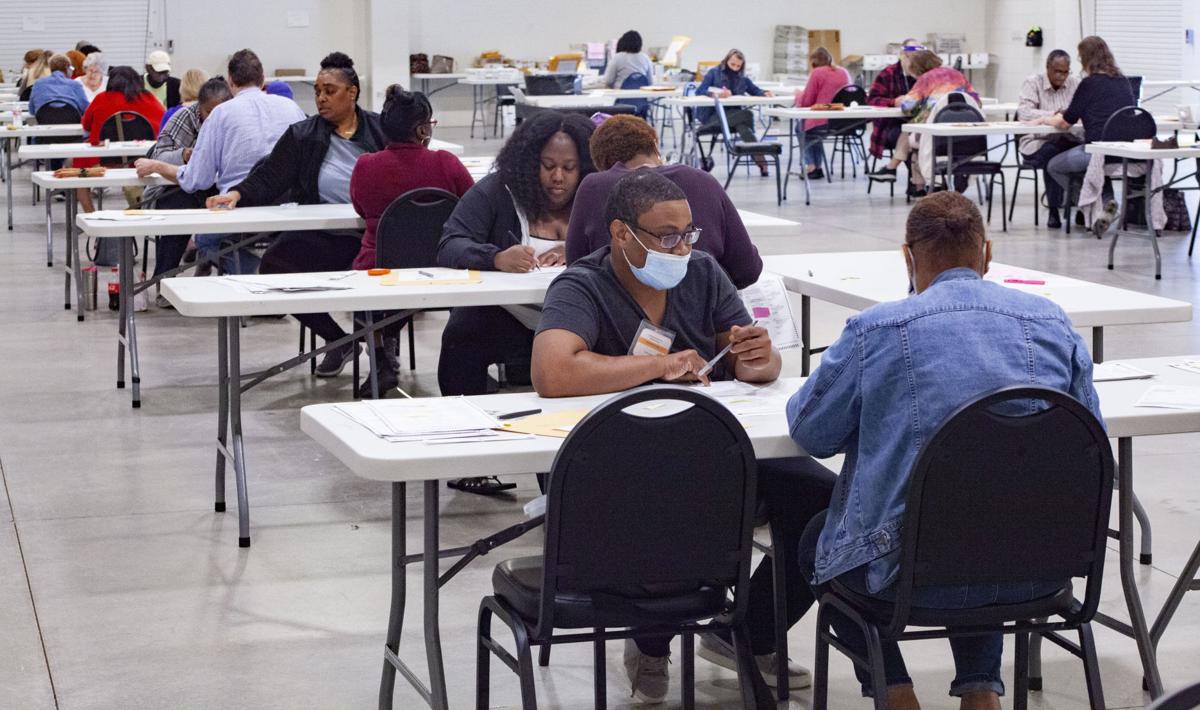 Volunteer Sam Stokes and dozens of other elections workers and staff from county departments including parks and libraries work through remaining ballots at Jim Miller Park on Tuesday.

MARIETTA — Dozens of elections workers, volunteers and county staff continued Tuesday whittling down the number of outstanding ballots in Cobb from the June 9 primary.

All in-person votes cast in the county, whether early or on Election Day, have already been counted. Those totaled about 70,000.

The remaining 3,000 ballots are damaged ballots that need to be duplicated by workers so they can be scanned or ballots that show unclear votes and will have to be reviewed by a voter review panel, Cavitt said.

When ballots must be reviewed — for example when someone has dropped their pen on one bubble but colored in another fully — the voter review panel makes a judgment about which candidate in an unclearly marked race the voter was intending to cast a ballot for, according to Cavitt.

If the panel can’t agree, a representative of the Board of Elections and Registration casts the tie-breaking vote. If voter intent can’t be determined, Cavitt said the race is left blank.

An important note, said absentee ballot supervisor Allison Schaffer, is that the process is not throwing away people’s vote. She said “no-vote” determinations are made on an individual basis for each race on the reviewed ballots.

In that case, or in a case where all possible bubbles are colored in on a ballot, then the voter would likely be determined to have decided not to vote, she said.

“What that voter is credited with is voting. (Their) choice might have been — instead of writing ‘nobody,’ or ‘not you,’ or ‘Mickey Mouse’ — (they) were showing, ‘I’m not voting for any of them,” Schaffer said. “But our scanners won’t accept an over-voted ballot, it will accept a blank ballot.”

PROVISIONAL BALLOTSOn Tuesday afternoon, Schaffer said many of the elections workers in one of the massive rooms at Jim Miller Park were sorting through about 300 of the 1,250 provisional ballots cast on Election Day.

Provisional ballots are used when there are questions about a voter’s eligibility that have to be addressed before the vote can count.

Like many of the absentee ballots in recent days, those provisionals were being duplicated on to new ballots for tallying.

“Previously we were doing just straight duplication, — there was a rip, there was a tear, there was coffee stains, some dog ate the ballot,” Schaffer said.

Now, she said, registrars have determined that approximately 300 of the provisional ballots that returned from the precincts need to be transferred onto clean ballots. That’s because some voters may have used provisional ballots after coming to the wrong voting precinct, she said.

In that case, races on the provisional ballots that do not properly correspond to the Cobb voter’s voting district will not be counted. Likewise, candidates that would have appeared on the voter’s ballot if they had gone to the precinct in their voting district will be marked as “no-votes.”

Cavitt said there is no estimate yet as to when county staff will finish counting the ballots, but the Cobb County Board of Elections and Registration is set to certify the elections on Friday.

About 16,800 out of 106,000 absentee ballots from Tuesday’s election have yet to be counted as of Monday afternoon, according to Cobb County s…

SMYRNA — More than 100 from in and around Cobb County gathered at Taylor Brawner Park in Smyrna on Sunday to hear from elected officials, ment…

CobbElections.org Election Night Reporting updated June 16th 2020 proves itself to be a liar. Purdue got 100% of votes which is 66,808 votes out of 66,808 votes cast. Donald J Trump got 100% of votes which is mysteriously somehow 63,256 votes out of 63,256 votes cast. Being that both Trump and Purdue were unopposed on the Republican primary, the same number of votes were cast for or against them, and that number is at least 66,808 based on Perdue's counts. Subtraction of Trump's 63,256 votes cast from Perdue's 66,808 votes cast indicates that Donald J Trump is missing 3,552 missing votes. Where did those votes go? Did Putin get them? Everybody on the government payroll associated with elections, they got to go. They are not competent. The counts are clearly wrong and you only need 1st grade math to see it!

Yes, I agree, and you DO need only 1st grade math to see it. So share with us, how many times have you flunked out of 1st grade math?

Duh.....Maybe Purdue just got 3,552 more votes than Trump. You must have flunked out of 1st grade math!!

To help you understand Sirhc, maybe I voted for Purdue & didn't vote for Trump. Do you get it now??????