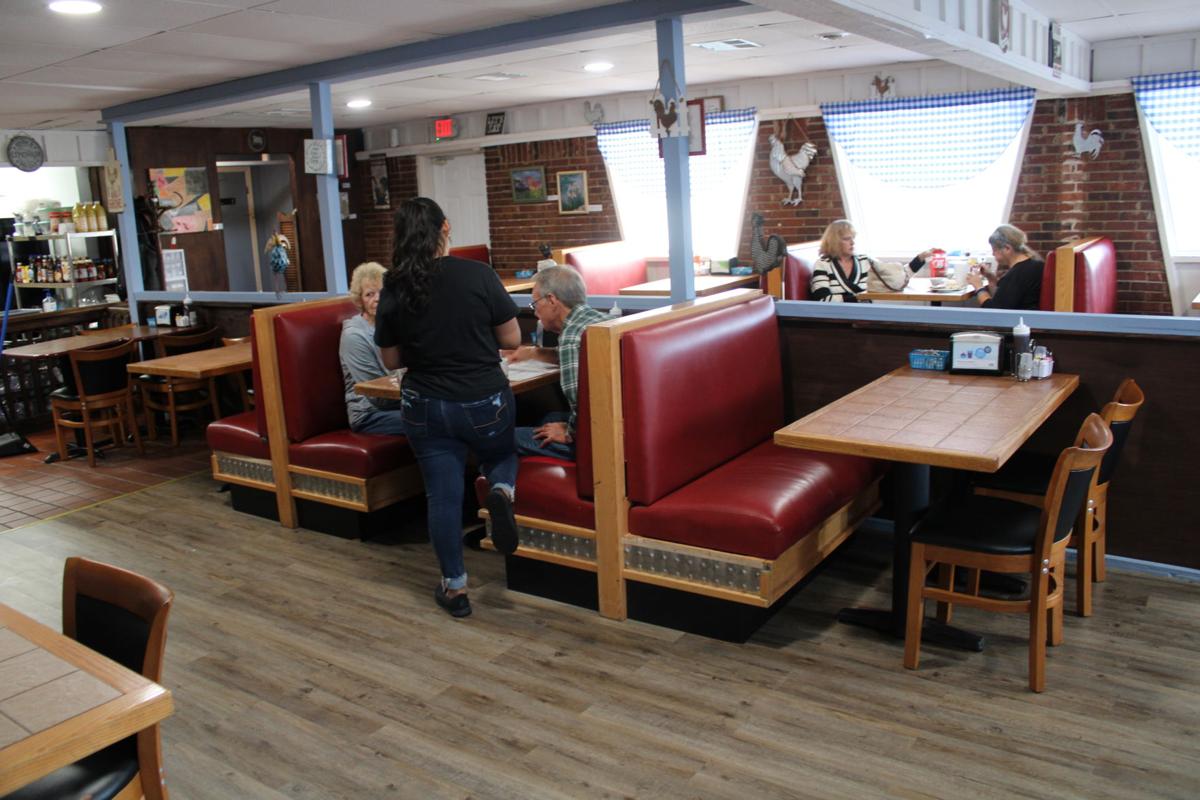 The upper dining room at Vittles. 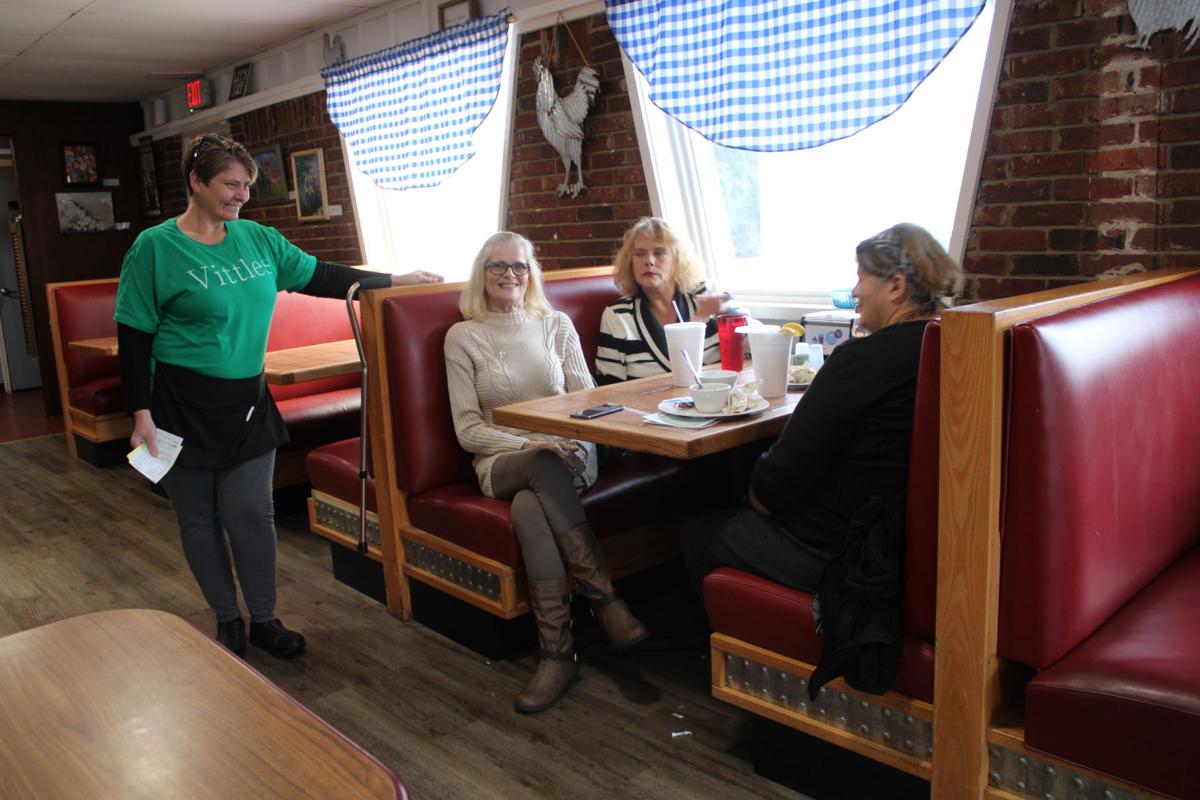 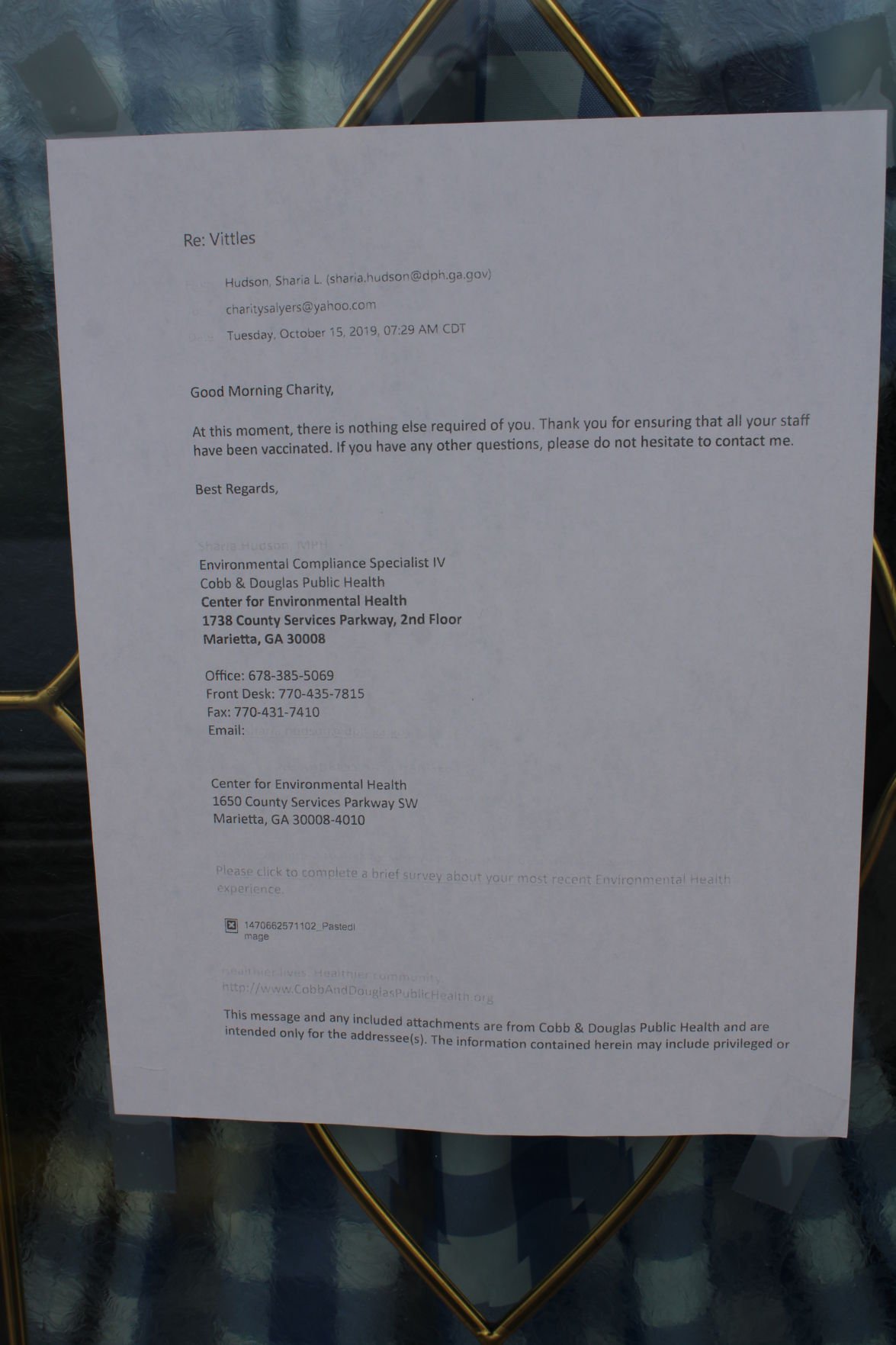 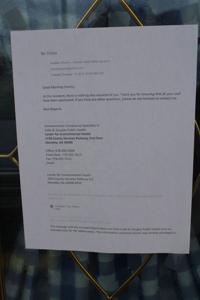 An email from the health department taped to Vittles’ front door.

The upper dining room at Vittles.

An email from the health department taped to Vittles’ front door.

Charity Salyers, the owner of Vittles Restaurant in Smyrna, wants to clear the air after a hepatitis A scare has driven diners from the popular spot.

“It’s devastating to see that we put so much money into the building, into the business, to try to bring it back because I was told it’s what everybody wanted, and now to see this,” she said. “We went from booming every minute of the day to like a ghost town.”

Vittles is currently in its second incarnation. Salyers opened it last month with the blessing of longtime owner Marilyn “Mace” Donaldson, who started the original Vittles in 1982.

Salyers gave the restaurant an extensive refurbishment which included completely cleaning out what was previously the smoking section and replacing all the vents and air ducts.

The spot reported brisk business when it opened Sept. 9, but Salyers said things slowed down as soon as the Cobb/Douglas Health Department announced an employee there tested positive for hepatitis A, a viral infection of the liver. Anyone who ate there Oct. 2 was advised to talk with their doctor.

No additional cases of hepatitis A have been reported.

Salyers said the employee was not involved in preparing food. She was a server who only served four or five tables Oct. 2 before Salyers sent her home.

“She came in at 2:30 that afternoon, and as the hours went on, a couple hours, I noticed her eyes looked yellow to me,” Saylers said.

Yellowing of the eyes or skin is one of the symptoms of hepatitis A, which Salyers knew because of a health department poster hanging in the back of the restaurant.

Salyers said the server did not have any other symptoms except feeling a bit tired. She had recently returned from a family trip to Tennessee, where authorities believe she unknowingly contracted the illness.

A couple days later, someone from the hospital called and said the tests found hepatitis A. Salyers, a self-described germophobe, said she got to work immediately.

“I immediately started sanitizing, throwing all of these things away,” Salyers said, pointing at a ketchup bottle. “Salt and pepper shakers, anything she could have touched, disinfecting, and bleaching everything. And when they called from the hospital, they said environmental services would be in touch with me. I had my ladies come in at five o’clock the next morning, which was that Friday, and my ladies were continuing to clean.”

Salyers said all Vittles employees have been vaccinated for hepatitis A, and she has the paperwork to prove it.

But she also said rumors began to circulate, some of which were patently false.

Speaking to the MDJ from the restaurant Sunday afternoon, Salyers said the experience was overwhelming.

“I was getting phone call after phone call from the public … And they were just scared. And I understood that, so I directed them to the health department. … And I just kept doing what I was supposed to do, but I kind of feel like it’s killed my business. As you can see, it’s a Sunday afternoon after church and we’ve been this way all day.”

Salyers gestured around the restaurant. Business wasn’t dead, but empty tables outnumbered occupied ones. On a typical Sunday, the after church crowd would keep the place packed for hours.

Salyers said she’s tried offering new specials and posting an email from the health department on the front door. A group of doctors and nurses who are Vittles regulars told her to take a picture of them eating there and post it on social media, which she did. But none of it seems to be bringing the customers back.

“I don’t know what to do to fix it,” she said. “Because I did everything I was told to do. And I did post the emails from the health department on the door, saying at this time there’s nothing else I need to do. I’ve done everything. Because I wanted them to know that somebody from over there is telling me I’ve done everything that I’m supposed to do.”

One group of friends, longtime Vittles regulars, sipped their drinks and chatted after finishing Sunday lunch.

Virginia Harper of Marietta said she knows about the hepatitis scare but is not worried about eating at Vittles.

“I have no doubt in my mind it was a one-time incident and you’re not going to find anything else,” she said. “She came in and took over this restaurant and basically ripped it all clean out and got rid of all the bad to start with some good, so I can guarantee you this restaurant is going to be doing very well.”

Darlene Porter agreed and said Salyers has made great improvements to the old Vittles.

“I’ve never had a bad meal, and this place, it’s always been clean,” she said. “Everything I’ve eaten in this place has been wonderful. I’ve never seen such a clean restaurant. From the old days to this is the difference between daylight and dark. She’s done a phenomenal job, and I urge anyone in Cobb County come to this restaurant.”

Deborah Wilson-Ashby, who is retired from working in business licensing and code enforcement, said it’s the family atmosphere that keeps her at Vittles.

“I would be here for three meals a day if it was feasible,” she said. “And there would be no doubt that I would be in here every day eating here because I feel like even though she had this incident, shoot, I could get sick from going up the road. I could get sick anywhere. But in here … they run this thing as if it was their own home and you were walking into it.”

Will the Biden administration halt mining near Okefenokee?

What have Melrose residents been reading during the pandemic?