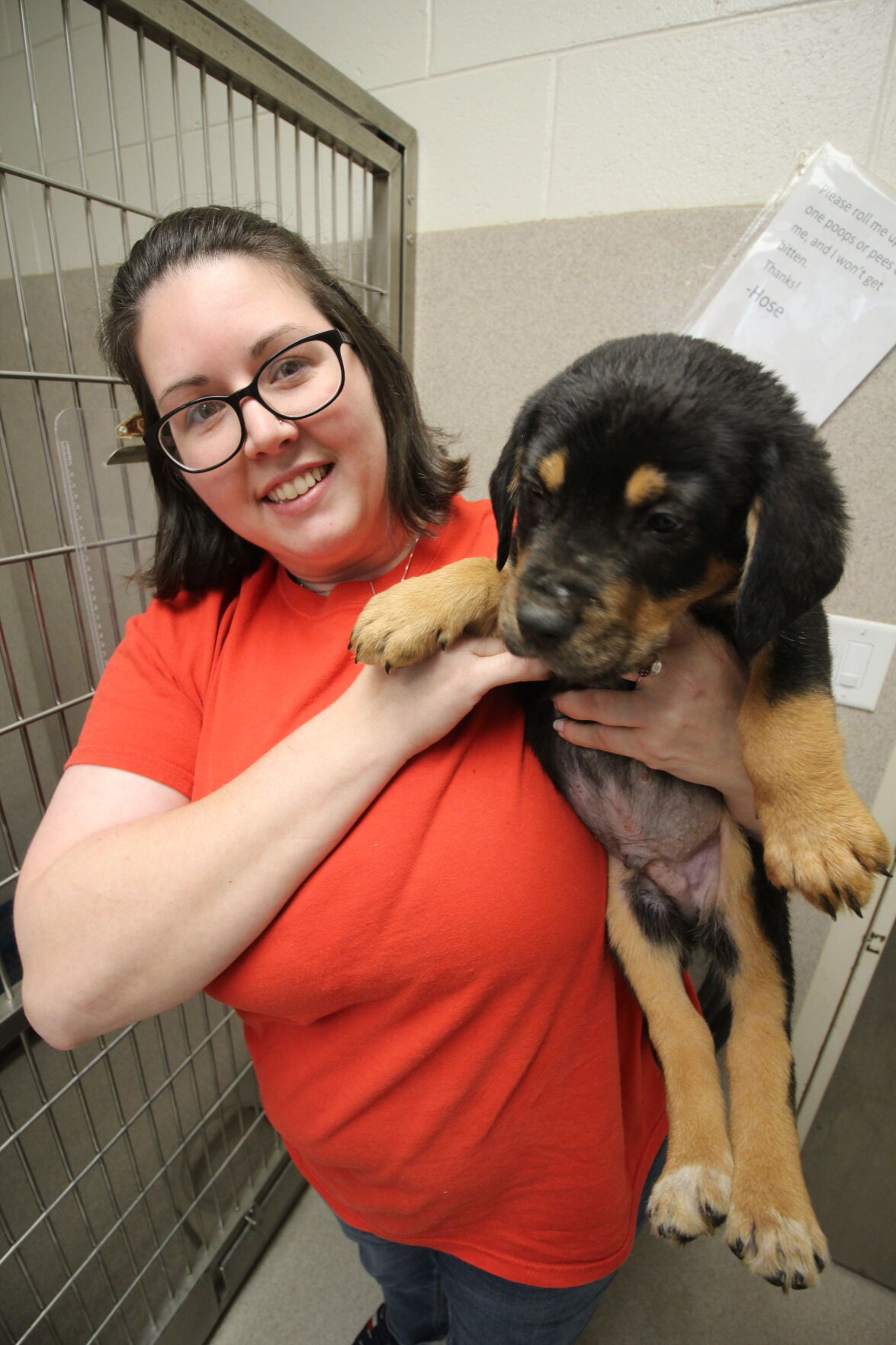 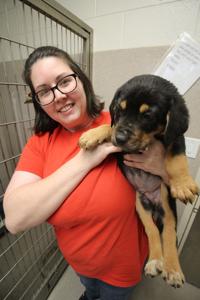 Humane Society of Morgan County Director Melinda Johnson with ‘Lex,’ one of a litter of puppies abandoned on the Firefly Trail in Union Point. 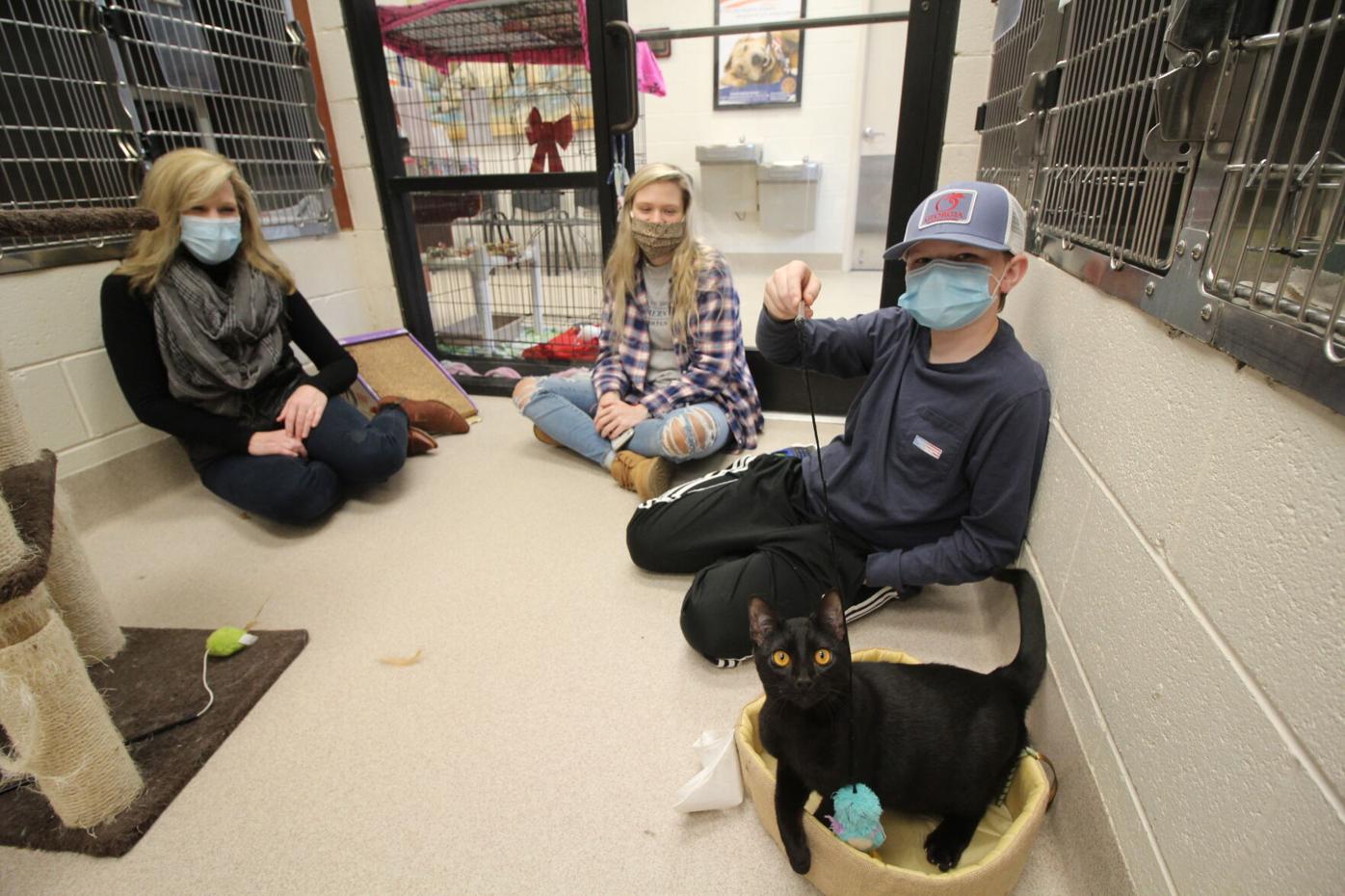 From left, Tina Parkman, her daughter, Madison, and son, Luke, are being interviewed by cats prior to an adoption. 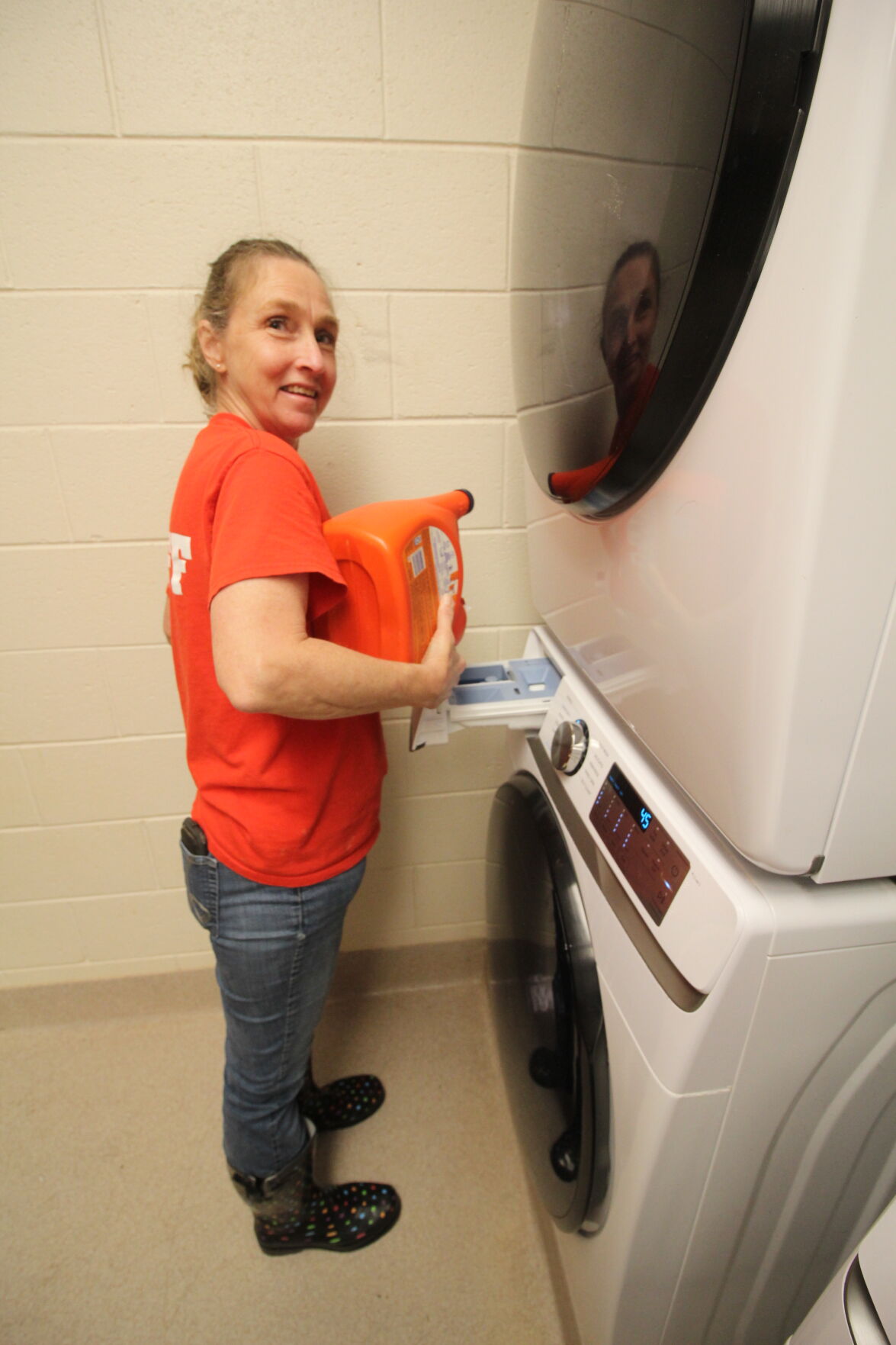 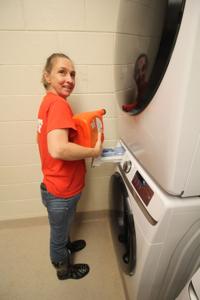 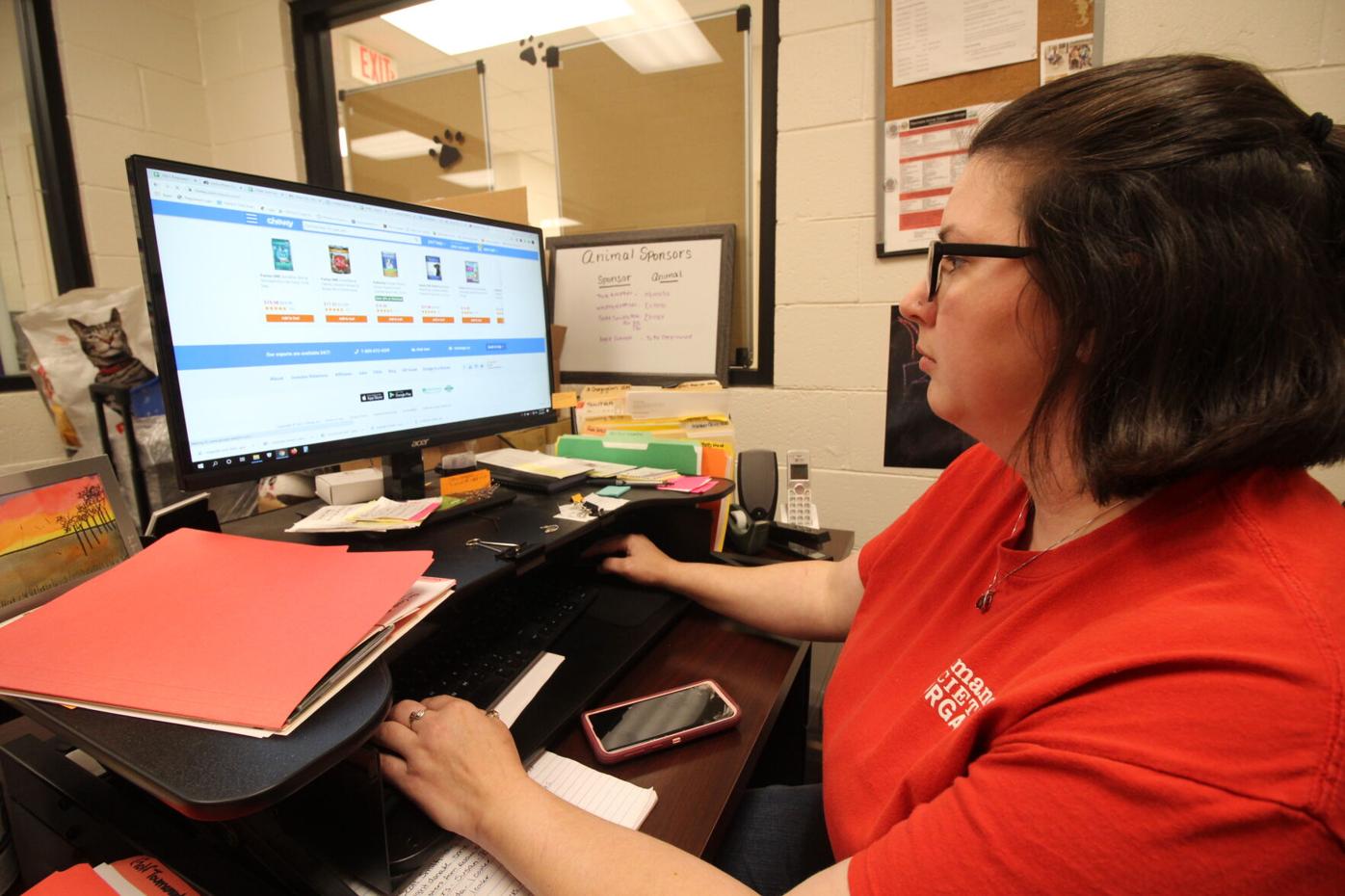 Humane Society of Morgan County Director Melinda Johnson with ‘Lex,’ one of a litter of puppies abandoned on the Firefly Trail in Union Point.

From left, Tina Parkman, her daughter, Madison, and son, Luke, are being interviewed by cats prior to an adoption.

To get to Miranda Johnson, you’ve got to navigate past a compliant “Captain Jack” and a fierce “Davy Jones.” Jack and Jones are rescue dogs that Johnson, the outgoing director of the Humane Society of Morgan County, keeps around her office. Jack is some kind of poodle mix and Jones a mix between some kind of terrier and God Knows What. He’s a lovely, fierce little fellow.

Stumble over Izzy, a 16-pound grayish cat that, honestly, looks like Garfield the cartoon cat after consuming a pan of lasagna, and you’ll find Johnson sitting at her desk. Izzy was surrendered by an elderly owner and was 23 pounds of matted fur and filth. She’s on a weight loss program now and is shiny and clean with penetrating green eyes.

Johnson is scouring internet sites willing to assist organizations like the Humane Society. Along with saving the lives of 259 dogs and 173 cats last year, Johnson’s other super power is stretching a dollar.

Sometimes, she says, Amazon and sites like Chewy.com, are willing to help with items like medicines desperately needed at the Humane Society to stretch the non-profit organizations meager annual in-flow of cash.

According to Dr. Pat Stokes, president, Board of Directors, Humane Society of Morgan County, the organization budgets $289,000 a year to operate. That money, raised through donations and grants that Dr. Stokes writes and prays over, fuels the adoption of the animals. While the organization charges $175 per adoption, Dr. Stokes says the minimum cost to get a dog or cat ready for a new family is $320. The shortfall, she says, has to come from donations.

When new animals arrive at the Humane Society, they are placed in a two-week quarantine. If they are not spayed or neutered, the operation is completed at Main Street Vet, which both Dr. Stokes and Johnson say have provided a lifesaving partnership with the group. Dogs receive a rabies shot and are tested for Parvo and heart worms. If a dog has either disease, Dr. Stokes says, the cost of keeping the dog rises.

Cats are checked for feline leukemia and are also spayed or neutered. On average, says Johnson, a dog stays at the Humane Society for 42 days before adoption. Cats take a little longer to find a home.

Last year, two of the dogs the society accepted had micro chips, including a German Shepherd found near the Morgan County/Greene County line. After the dog was brought to the society, the chip was found and the dog’s owner was contacted. Dr. Stokes said the reunion was joyful. “That dog was so happy.” Both dogs were reunited with their owners.

The society operates with 10 part-time employees, including Johnson, who says since April of 2019 when she started as the assistant director, the work has been a dream job. “I’ve loved animals my whole life,” she says. Johnson fostered dogs as a teen while growing up in Milledgeville. Her first week at the society, she took home a litter of kittens to bottle feed back to health. “I’ve always had a passion for animals.”

The state-of-the-art facility on Fairgrounds Road also operates with between 10 to 20 volunteers depending on the need.

Currently there are 35 dogs at the society looking for a new home including five puppies found abandoned at the Firefly Trail in Union Point. The pups, Johnson says, appear to be some type of German Shepherd mix and are a rolling, happy bundle of well-fed fur and joy. They have been named after points on the trail. Johnson grabs a dark and tan puppy named Lex (Lexington) and gives the dog a hug. “It’s a great job. It’s very rewarding,” she says.

Currently the society is desperate to replace outdoor turf for a dog play area. “The artificial turf is gone. It’s torn up right and left,” says Dr. Stokes. An initial quote to repair the turf was $20,000. “That is our ‘Oh my God, we’ve got to raise a lot of money this year’ moment,” she says.

To do so, the society is having to adjust to both a sluggish economy and a COVID cautionary society that is reluctant to gather for a good time and a good cause.

On March 27, the society is holding a fundraiser golf tournament at the Creek Course at Hard Labor, an event Dr. Stokes hopes will raise approximately $15,000 to replace fundraising events the society has missed because of COVID, like last year’s Paws and Purrs Winter Gala. A foursome at the event is $400 and the golf tournament starts at noon. Lunch is provided. Johnson said the society gladly accepts donations at the Humane Society of Morgan County, 1170 Fairgrounds Road, Madison, Ga. 30650 or donations can be taken at their website humanemorgan.org

It’s the nature of the business, says Johnson and Dr. Stokes. “We’ve got to raise money to do what we say we are going to do, which is to save lives,” Dr. Stokes says.