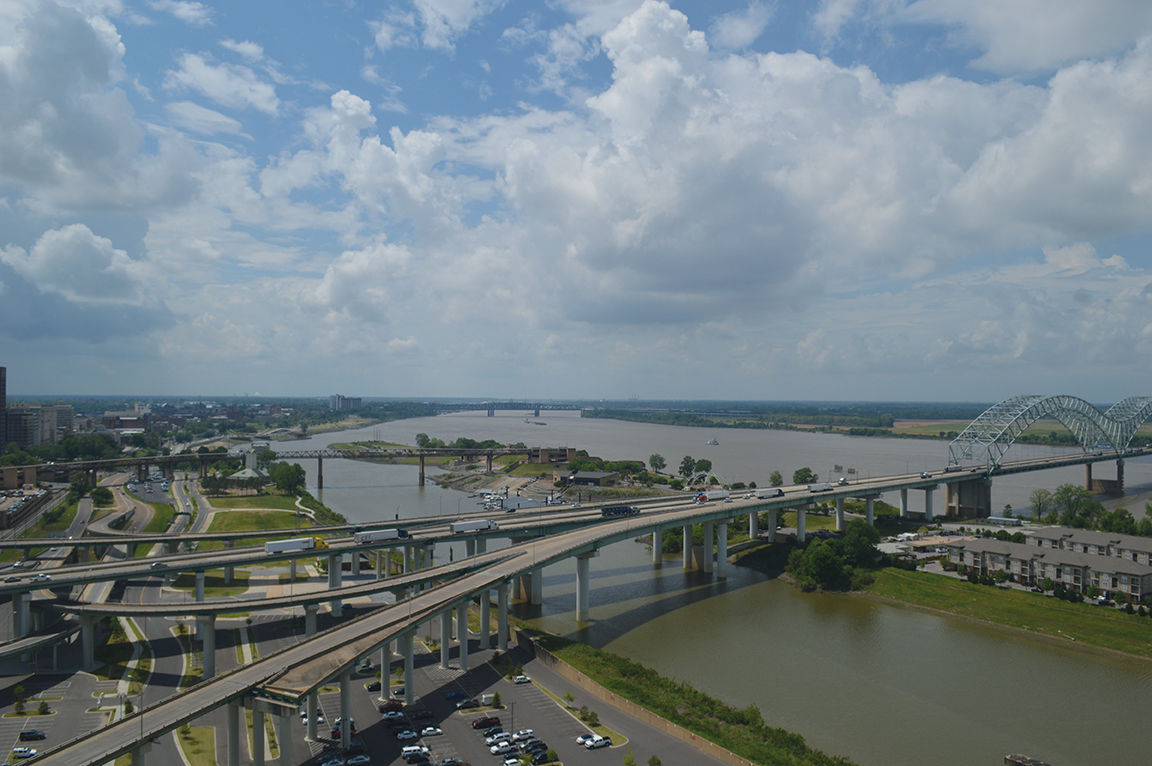 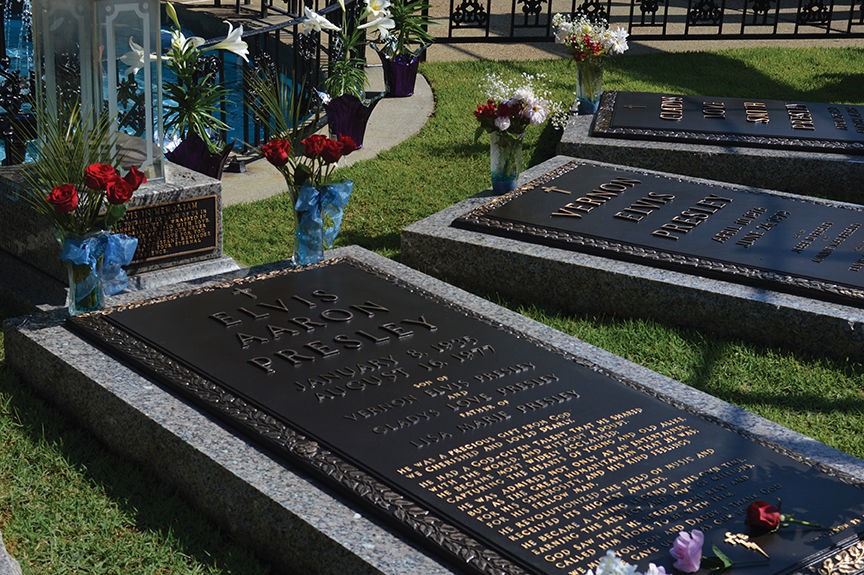 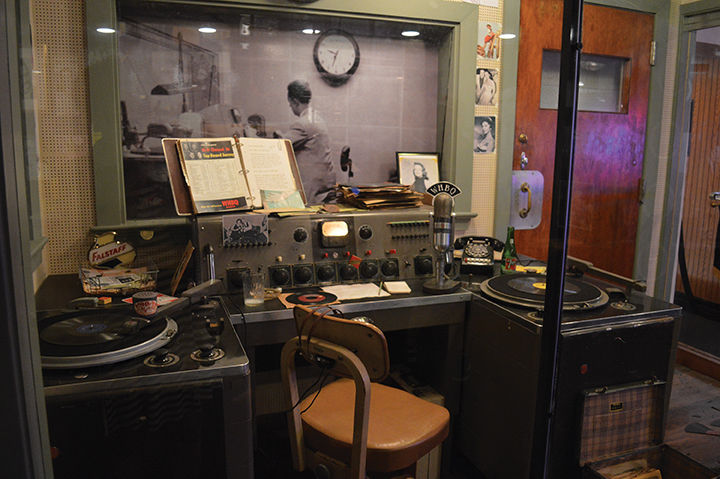 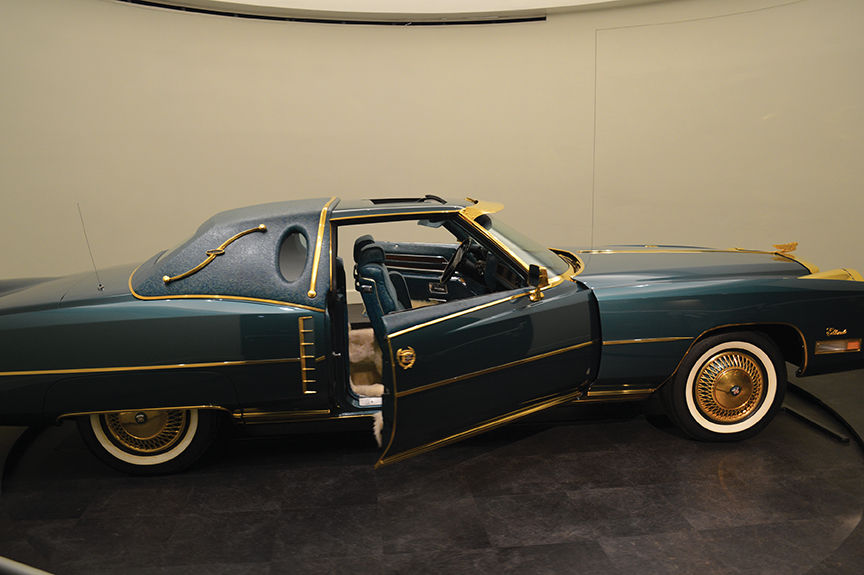 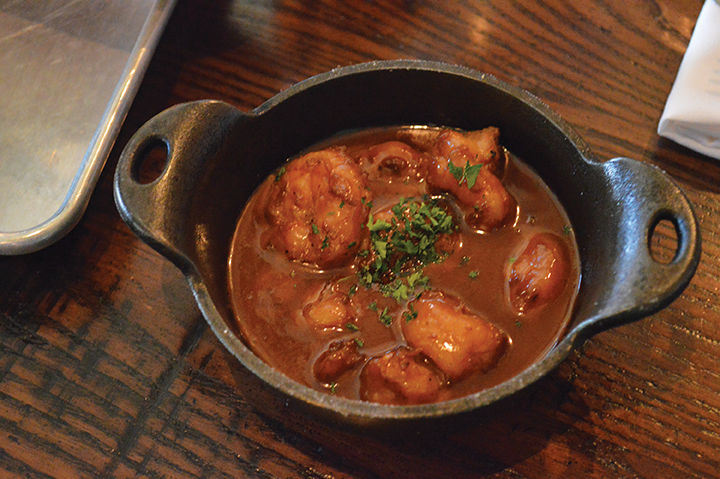 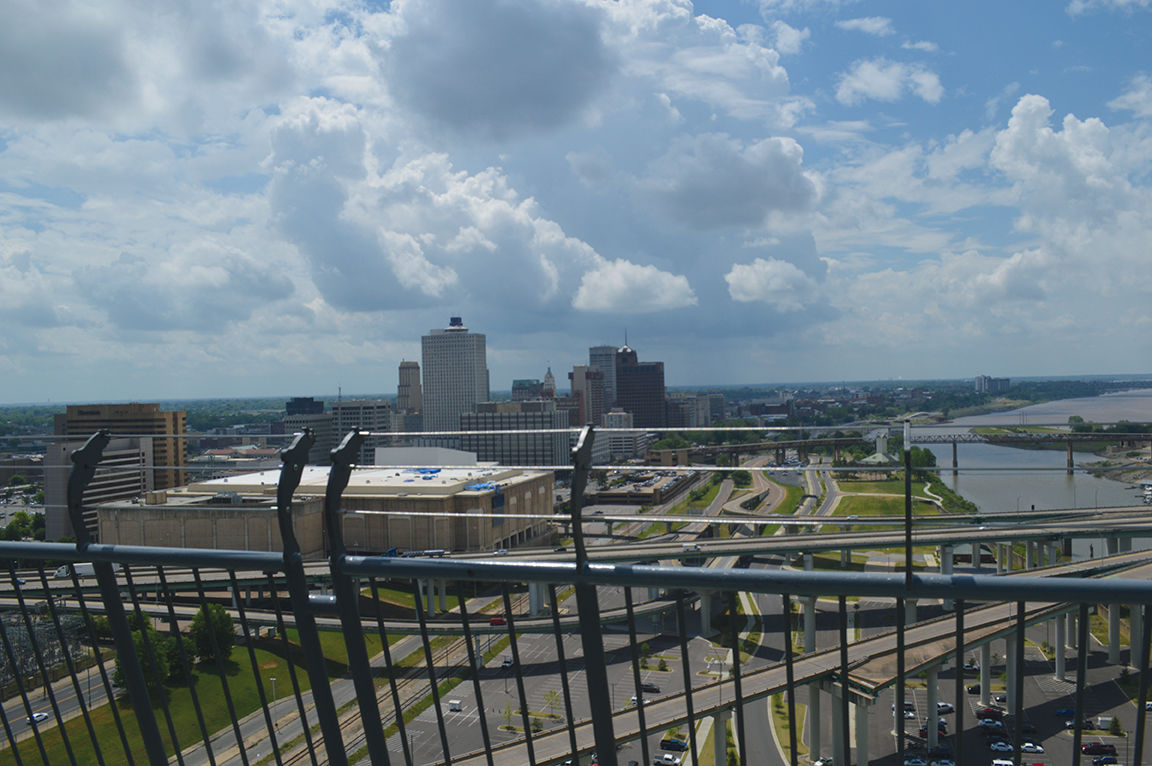 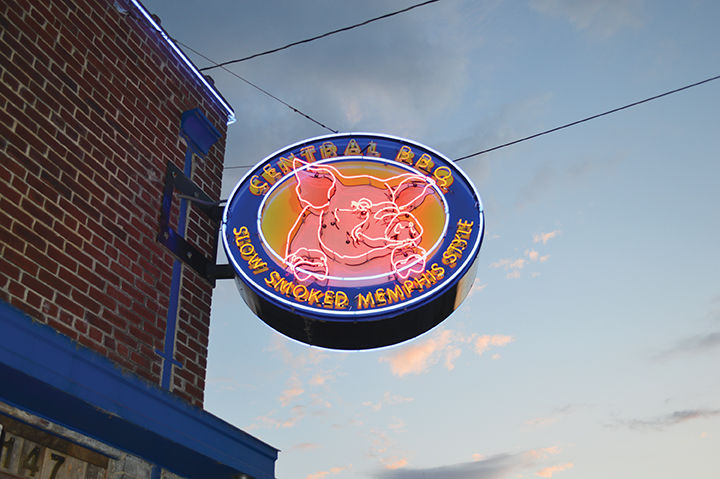 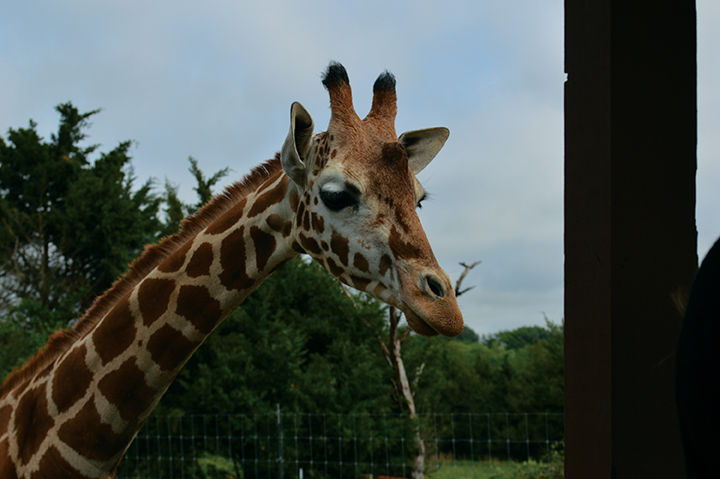 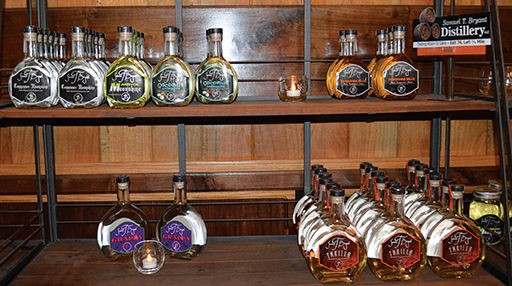 As I watched four outrageously talented gentlemen take on the personas of Elvis Presley, Johnny Cash, Carl Perkins and Jerry Lee Lewis at the Cobb Energy Performing Arts Centre, reenacting the December day the four greats joined forces at Sun Studio in Memphis for a spur-of-the-moment jam session, I couldn’t help but feel I was sitting on a secret.

That day set the stage for one of rock and roll’s most iconic photos of the foursome, dubbed the Million Dollar Quartet, and I was there.

Not December 4, 1956, obviously, but close enough. Just weeks before I’d visited Sun Studio and stood on the original tile floor in the very room that hallowed event took place, gazing upward at the angled acoustic ceiling. Likely dozens in the audience could say they’d done the same, but I’d much rather believe my experience was exclusive.

I was on a mission to explore the city’s gems — something I’d never done in all my years of visiting my father’s hometown — and Sun Studio was one of many stops on my packed itinerary. I arrived on a late Tuesday afternoon and checked into — where else? — the brand spanking new Guest House at Graceland. I’d decided that if I were going to immerse myself in Memphis, I might as well start with the city’s most famous son: Elvis Presley.

Because I’d forgone my usual scouring of Trip Advisor, I wasn’t sure what to expect: Would I encounter The King’s ghost on a late-night trip to the ice machine? Would peanut butter and banana sandwiches (or an iteration) be available for purchase? And would the melodies of “Jailhouse Rock,” “Love Me Tender” and other hits fill the halls day in and day out? No, yes and kinda. Delta’s Kitchen and E.P.’s Bar & Grill, two of the hotel’s dining options, both serve peanut butter and banana pudding. And the hotel’s TV channel plays all Elvis, all day long, allowing guests to choose from four decades of music.

The hotel’s informal facade, reminiscent of Graceland, Elvis’s home and final resting place, belies its interior elegance. High-backed chairs and sleek sofas in purple and gray dot the lobby, giving it a modern feel with a twist of grandeur, and the same design flows into the rooms, where a photograph of one of Elvis’s jumpsuits serves as artwork. Fun fact: Elvis’s ex-wife, Priscilla Presley, headed up the design of the hotel’s 20 suites. Unfortunately, I didn’t have time to explore much else, as I was in and then out from almost sunup to sundown during my stay.

My first stop was the Memphis Rock ‘n’ Soul Museum, within walking distance of the famed Beale Street and a great option for those who can’t squeeze in visits to Sun Studio, the Stax Museum of American Soul Music (the world’s only museum dedicated to soul music) or the Memphis Music Hall of Fame (featuring Memphis native and inductee Justin Timberlake). It does a stellar job of giving visitors an overview of the city’s role in birthing some of the world’s most influential musicians.

The next morning, I rose bright and early, excited about my first trip to Graceland. To be frank, I was more interested in the house and its story than I was the owner, as I love historical properties, but the iPad-assisted tour of the home shed much light on the man behind the music and offered small but interesting details about the home.

My favorite was the Pool Room, a deliciously gaudy kaleidoscope of color with 350 yards of multicolored fabric covering the walls and ceiling that took three people 10 days to hang.

Across the street is the newly opened Elvis Presley’s Memphis, a $45 million, 200,000 square-foot entertainment complex comprised of the world’s largest museum dedicated to Elvis Presley, Presley Motors, which features his car collection, restaurants bearing the names of his beloved parents and grandmother, as well as gift shops.

For the second time in my travels, I was most intrigued by what lay outside the city limits. Jackson, 70 miles east of Memphis and the birthplace of  “Blue Suede Shoes” songwriter Carl Perkins and Hard Rock Cafe founder Isaac Tigrett, is a city full of character and small-town charm. It’s worth a day or overnight trip just to explore Tennessee Safari Park, the state’s only drive-through safari — you haven’t lived until you’ve casually walked among peacocks or been chased by hungry ostriches — featuring thousands of animals, some rare and endangered.

After adventure, fill up at Rock’N Dough Pizza and Brew Company, a Memphis-born pie shop that surprised me with its tasty Gordelia (white sauce, steak, gorgonzola, arugula and balsamic reduction) and Super Freak (white sauce, spicy Italian sausage, caramelized onions and honey) offerings. Once you’re full, head over to Century Farm Winery, Samuel T. Bryant Distillery (or both!) to tour and taste Tennessee-crafted libations. At just over 10 years old, Century Farm is a 13.5 acre-vineyard offering nine varieties of wine, with 85 percent of the fruit used grown on the property.

If you’re in the mood for something a little stronger, Samuel T. Bryant Distillery offers blueberry moonshine and TNKILLA, an agave-based spirit reminiscent of — you guessed it — tequila, among other creations.

If you prefer a little variety among the many rib platters and pulled pork sandwiches to be found, The Second Line is the place to go. Cajun-Creole classics are king on this restaurant’s menu, named after New Orleans’ famed brass band parades. Try the andouille, crawfish and pimento cheese fries with a cup of gumbo. For a panoramic view of Memphis and the Mississippi River, enjoy lunch at Lookout at The Pyramid, Bass Pro Shops at the Pyramid’s restaurant that sits 300 feet above the river.

Want to maintain your exercise regimen while visiting? Rent a bike from Peddler Bike Shop and take a short ride on Big River Crossing, which overlooks the Mississippi River and links Memphis, to West Memphis, Arkansas.

Though the new National Museum of African American History and Culture in Washington, D.C., is a must-see attraction, the National Civil Rights Museum at the Lorraine Motel is a bit easier to get into these days. A $27.5 million renovation introduced 40 new films, oral histories and interactive media. Wind your way through African-Americans’ beginnings in this country and view the hotel room Dr. Martin Luther King Jr. was staying in when he was assassinated.

There’s a reason The New York Times named Greenville, S.C. as one of their 52 Places to Go in 2017. I was eager to visit, having heard so much…

When I traveled to Ann Arbor, Michigan I didn’t know what to expect. But what I wasn’t expecting was to encounter such a vibrant city full of …

Spend a luxurious vacation at Chateau Elan or in Elkhart Lake, Wisconsin

Vacations can take on many forms. Some may go on them for adventure. Trekking across foreign lands and taking part in some daredevil-like acti…