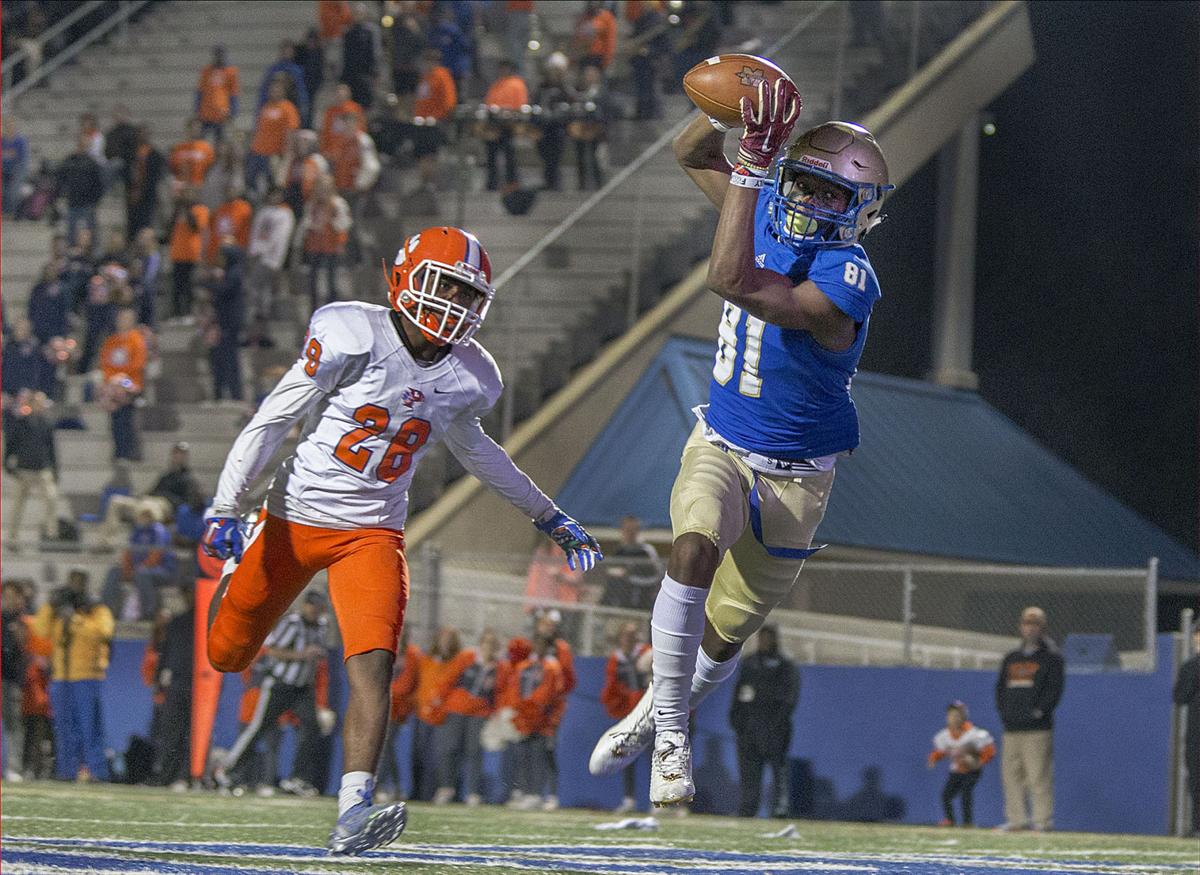 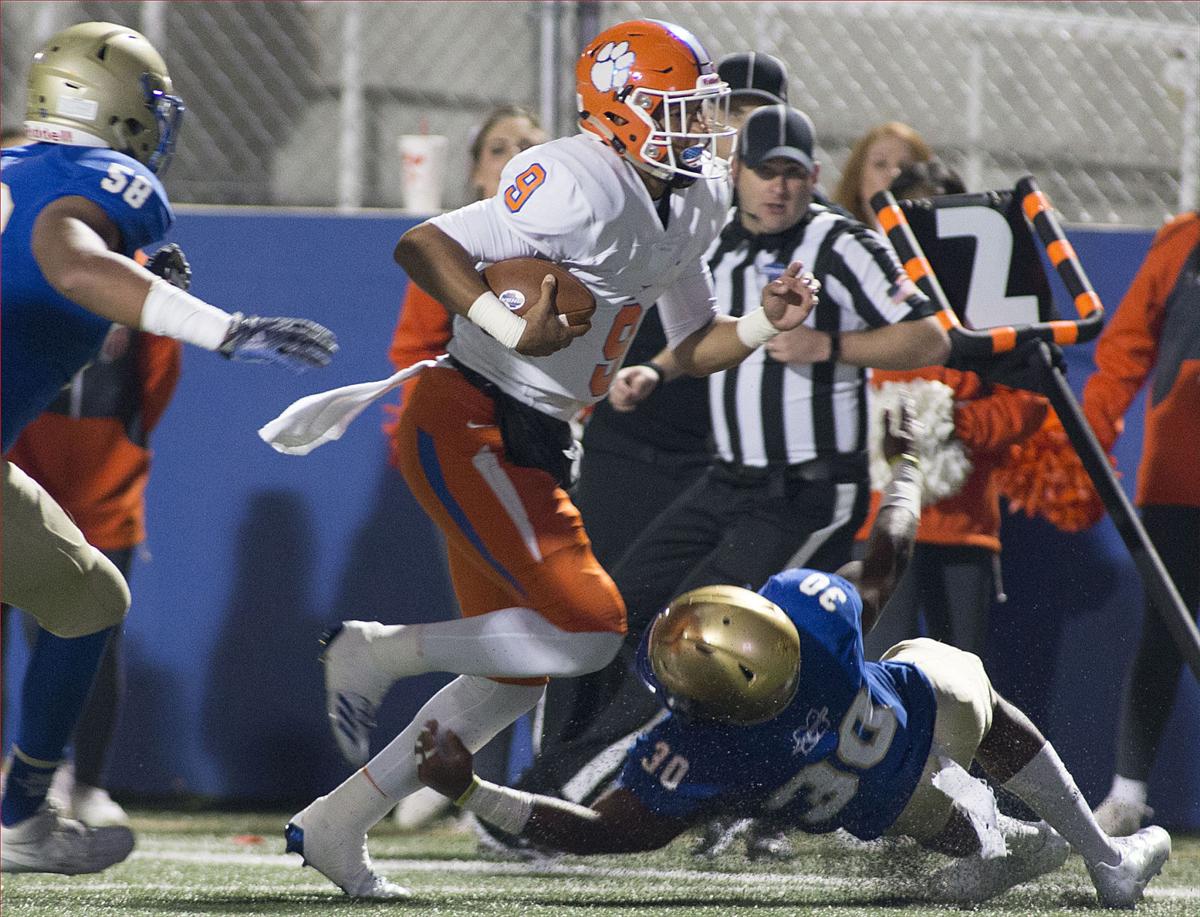 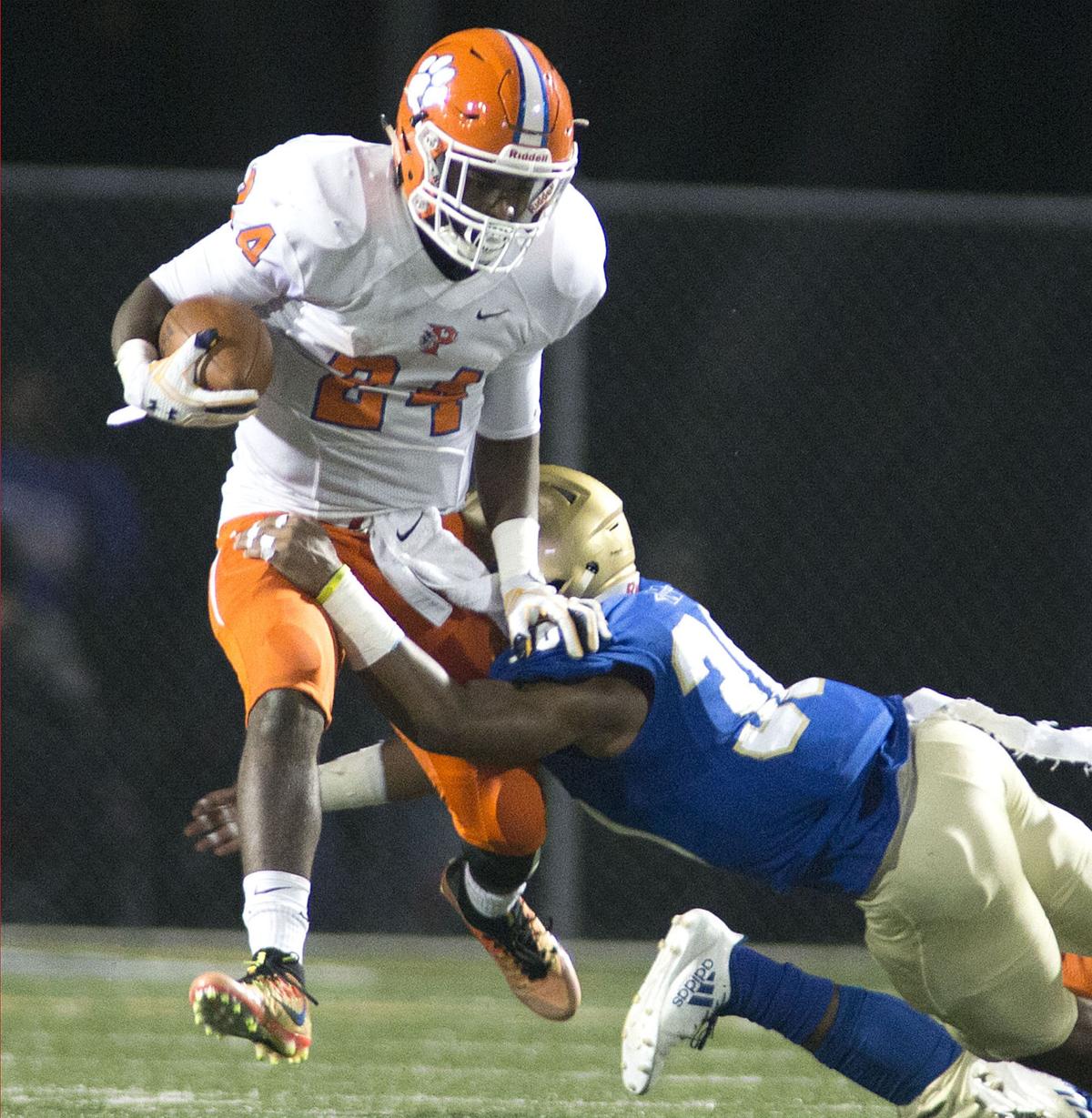 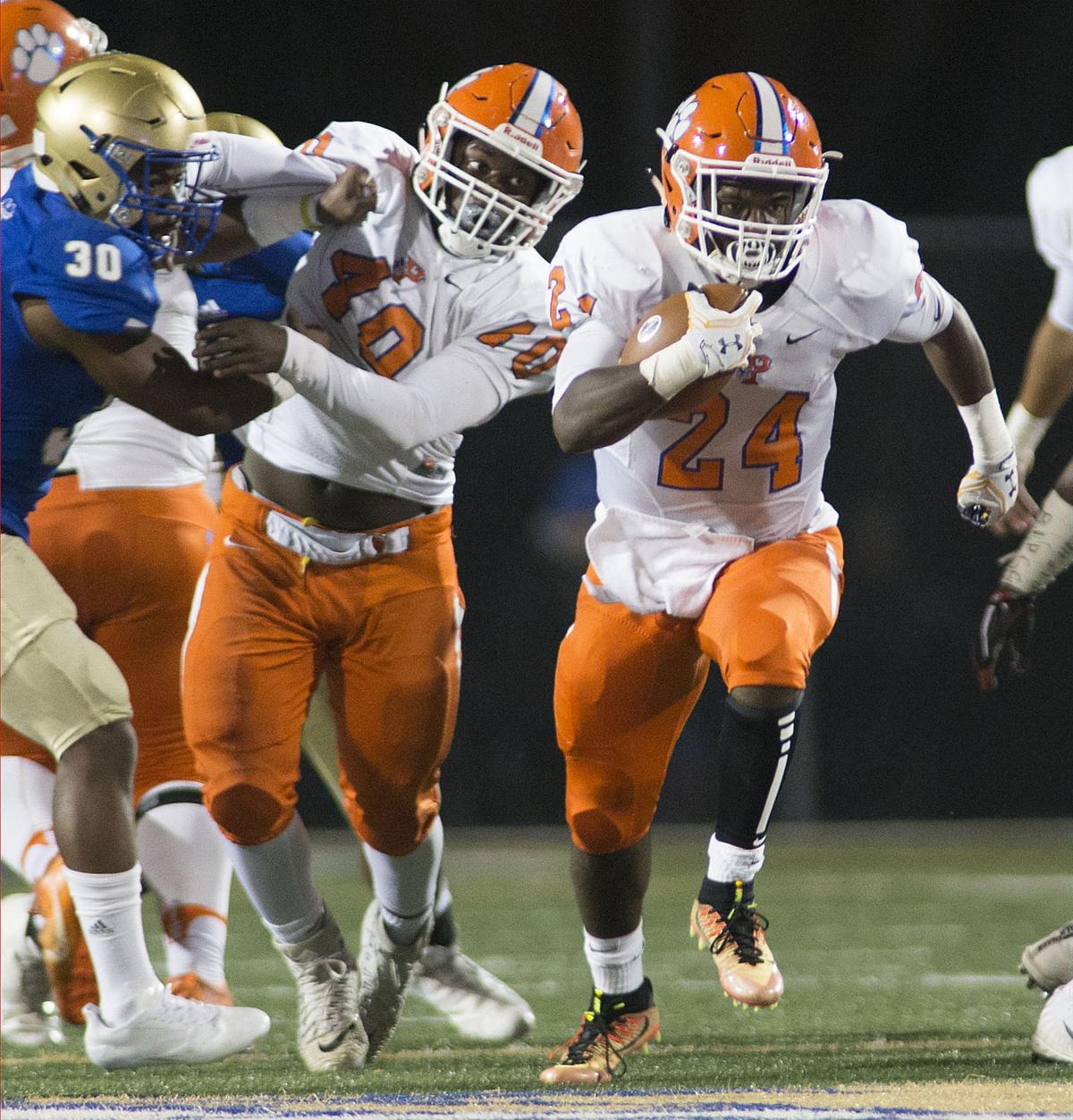 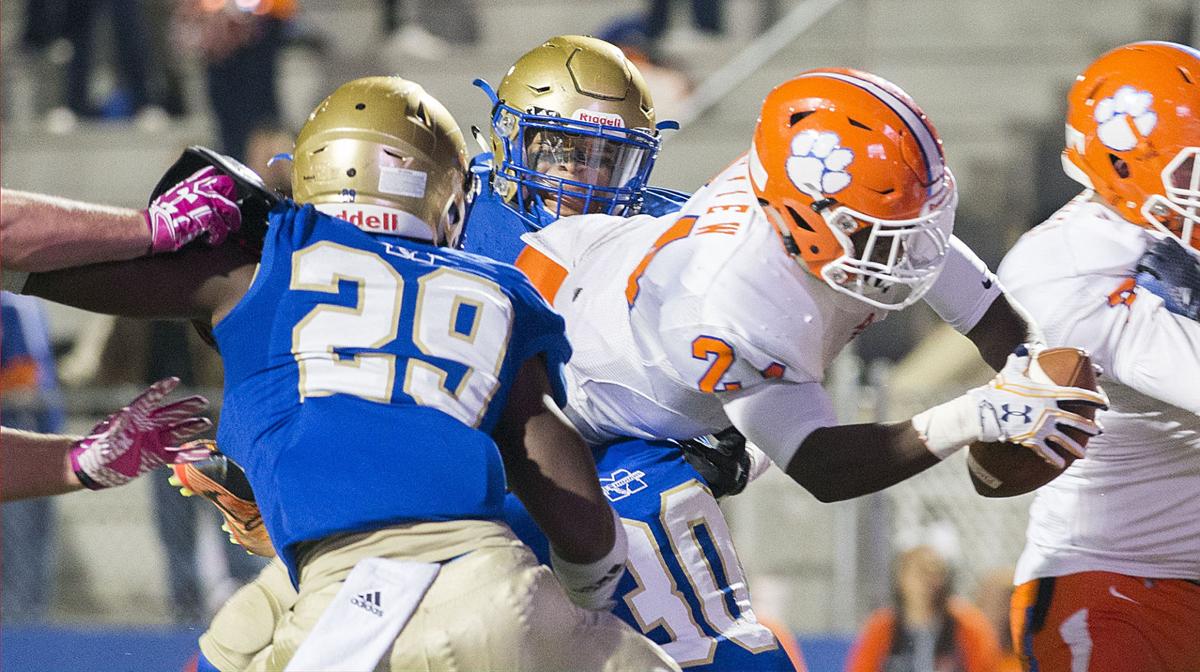 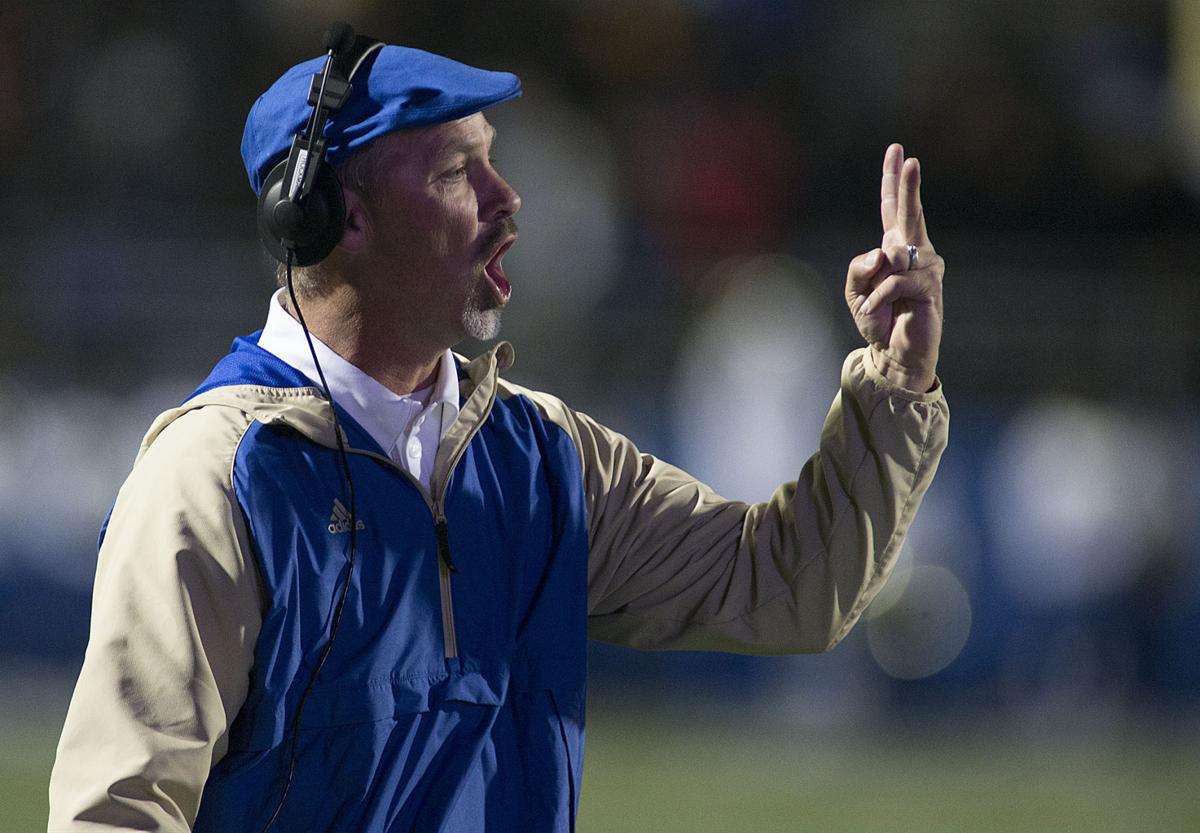 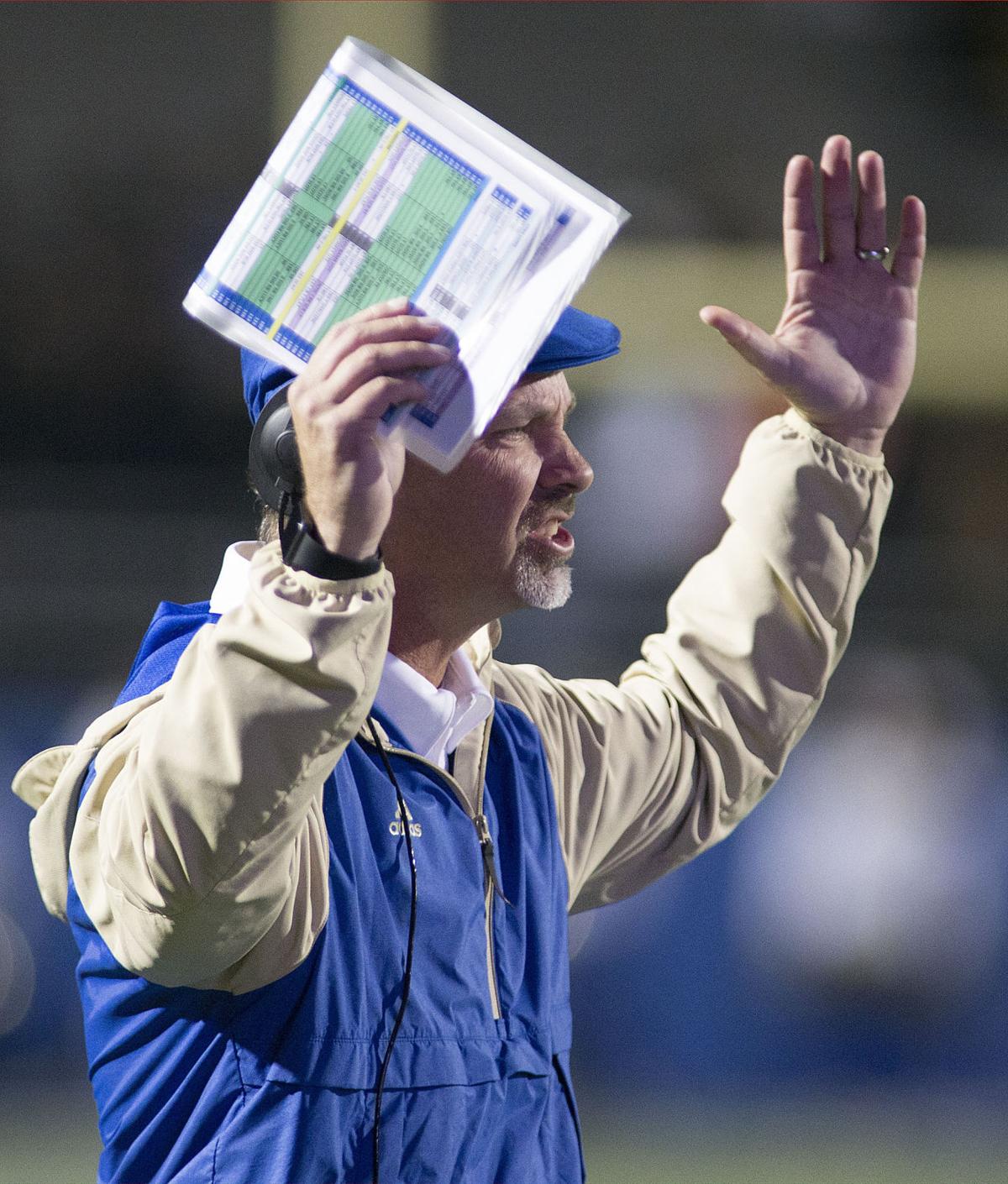 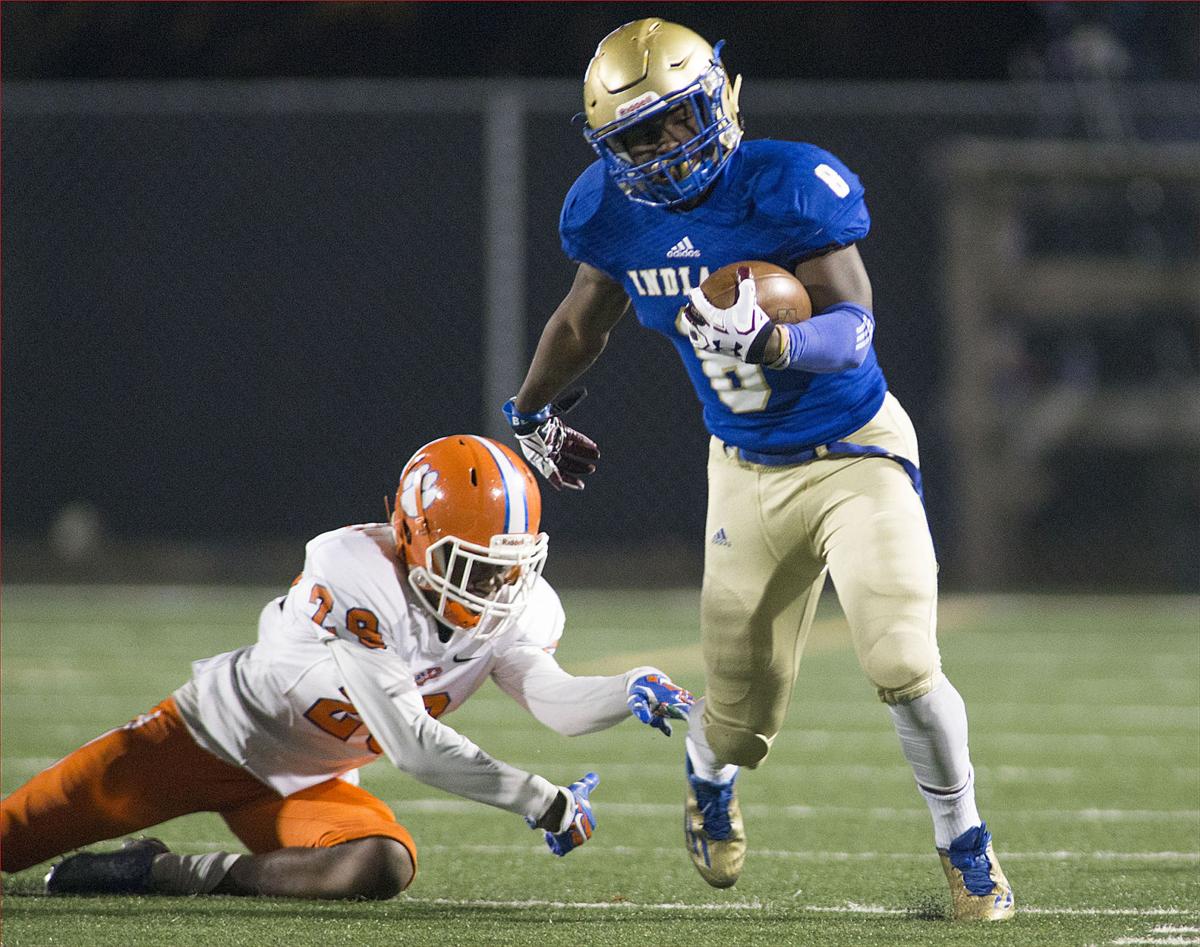 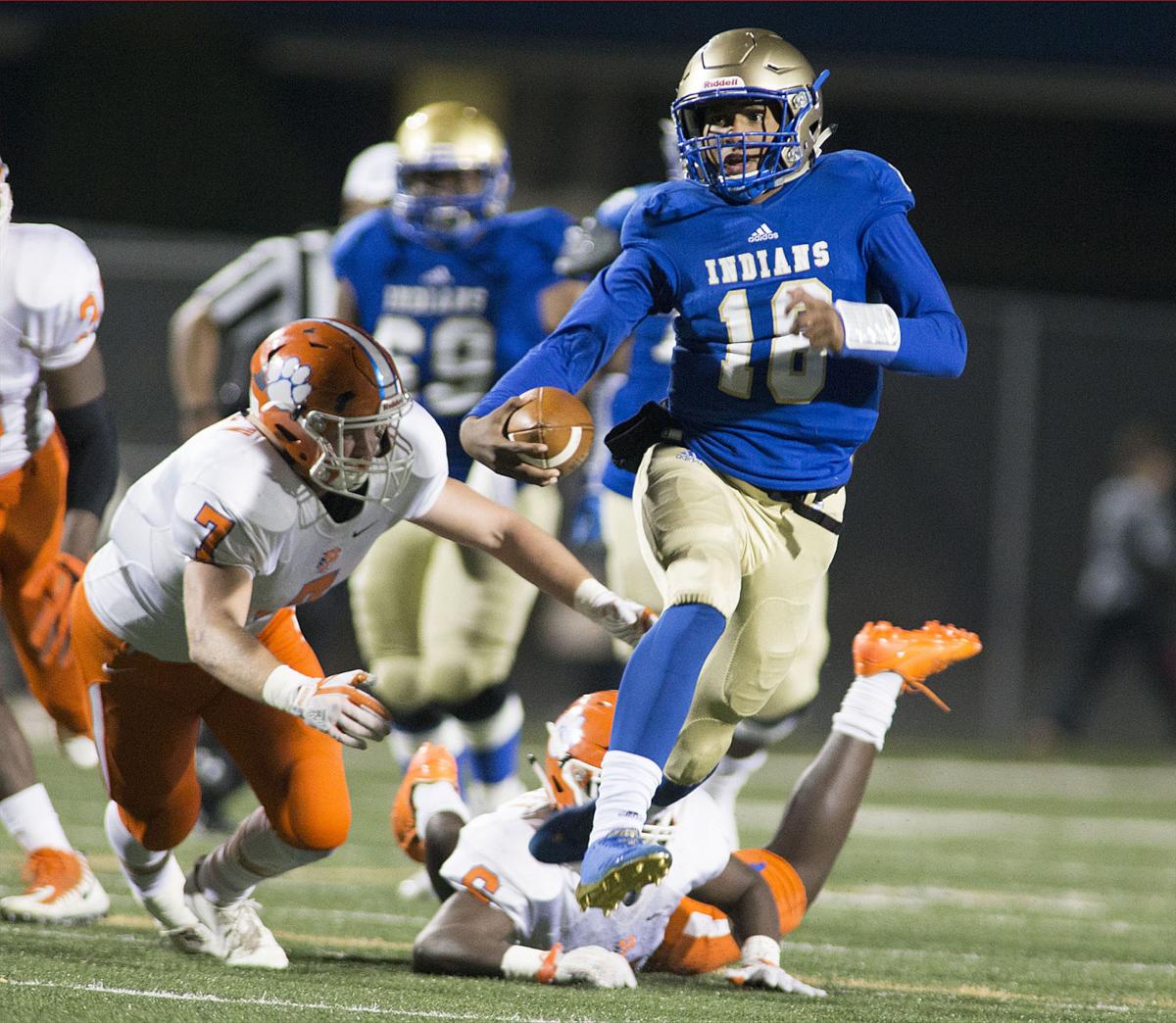 McEachern's CARLOS DELRIO-WILSON takes off out of the pocket for a larger gainer against Parkview during Friday night's GHSA Class AAAAAAA quarterfinal matchup. Staff-Kelly J. Huff 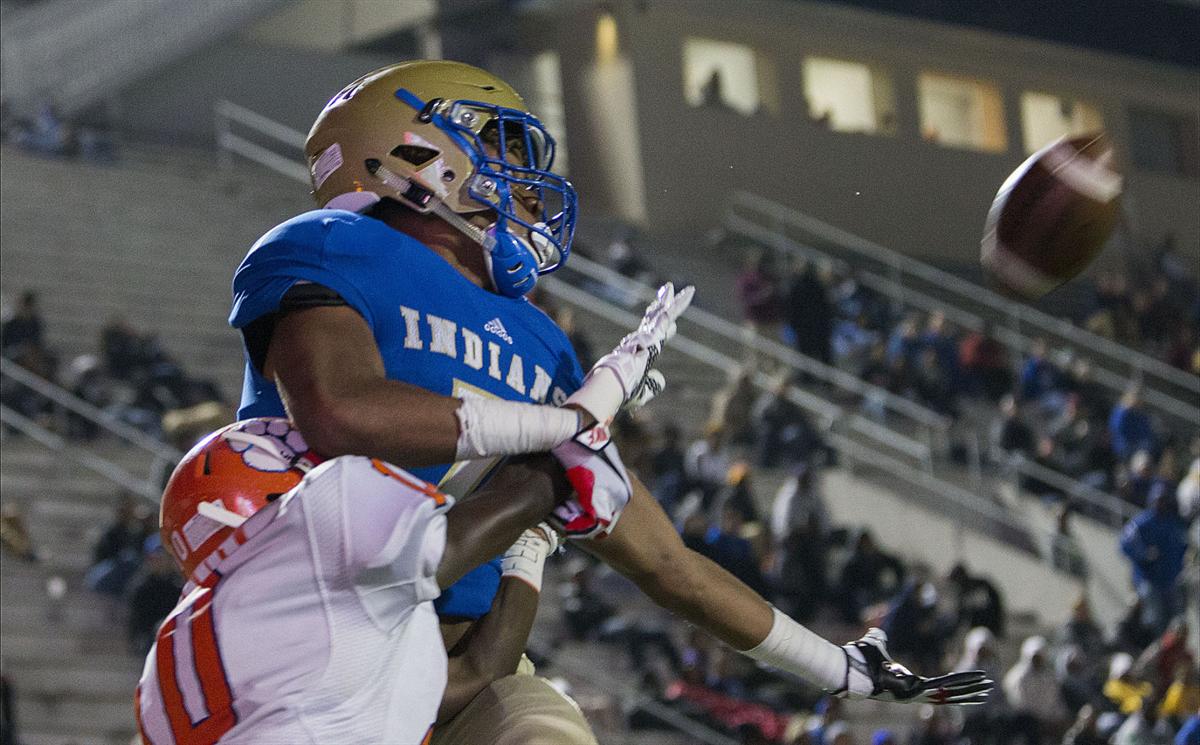 McEachern's GENUINE POTTS reaches back for a pass in teh endzone as Parkview High School's Matt Chavers gets called for interference on teh play setting up a score for the Indians during Friday night's GHSA Class AAAAAAA quarterfinal matchup. Staff-Kelly J. Huff 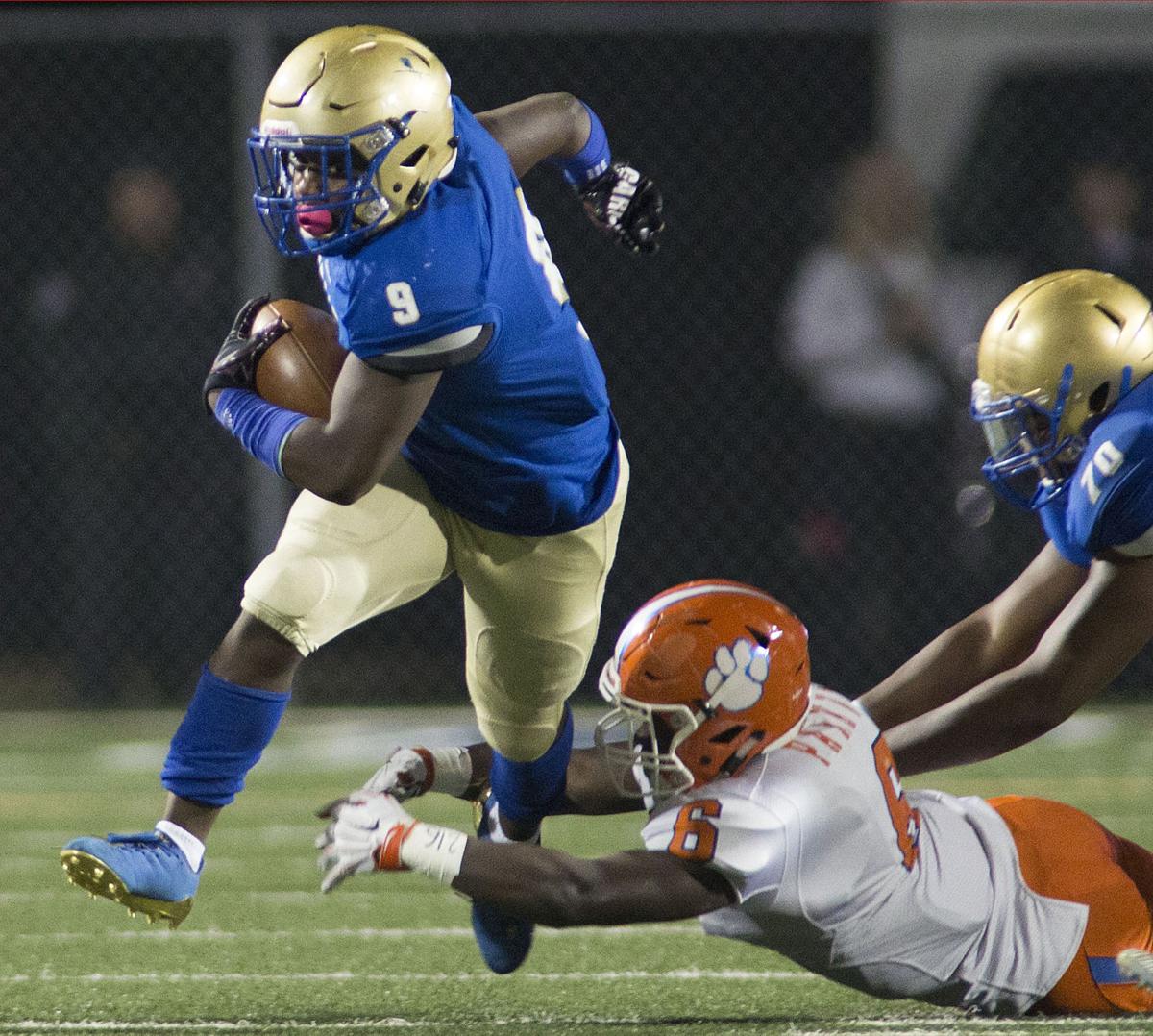 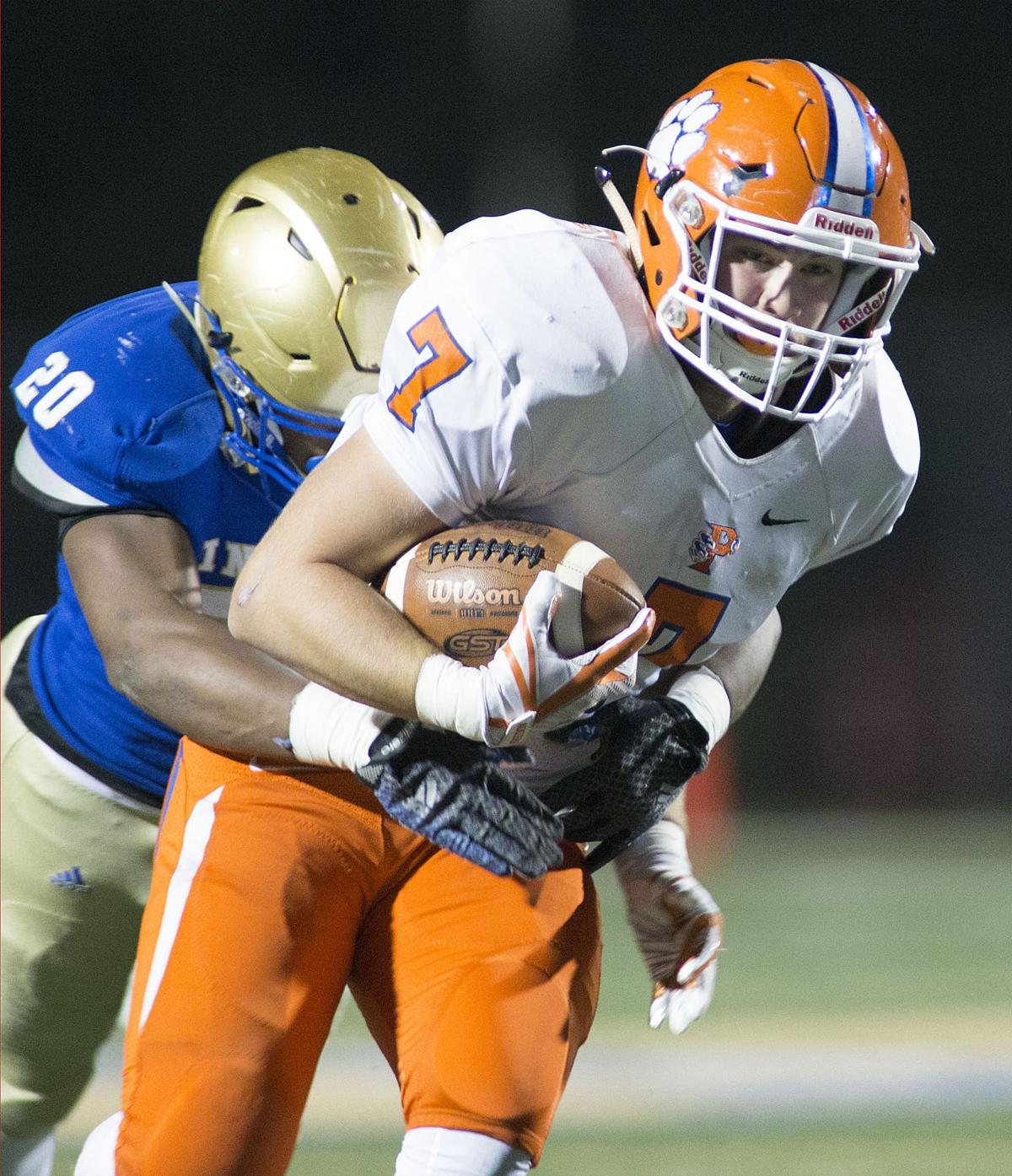 McEachern's CARLOS DELRIO-WILSON takes off out of the pocket for a larger gainer against Parkview during Friday night's GHSA Class AAAAAAA quarterfinal matchup. Staff-Kelly J. Huff

McEachern's GENUINE POTTS reaches back for a pass in teh endzone as Parkview High School's Matt Chavers gets called for interference on teh play setting up a score for the Indians during Friday night's GHSA Class AAAAAAA quarterfinal matchup. Staff-Kelly J. Huff

POWDER SPRINGS — McEachern running back Paris Brown was sick and throwing up prior to Friday night’s Class AAAAAAA state quarterfinal game against Parkview.

Coach Kyle Hockman reminded Brown earlier in the day about what he did when he played sick during an eighth-grade game several years ago.

“‘I ran for five touchdowns,’” Hockman recalled about Brown’s response to the question.

Brown did not put up those gaudy scoring numbers Friday, but he was just as impressive, logging 22 carries for 150 yards and two touchdowns as McEachern beat Parkview 43-28 at Walter Cantrell Stadium and advanced to next week’s state semifinal matchup at North Gwinnett.

It will be the Indians’ third semifinal under Hockman after the 2013 and ’14 seasons, and the fifth in team history.

Jalen Thornton had 12 carries for 90 yards and two touchdowns as the Indians (10-3) totaled 274 yards on the ground and played with the lead for much of the game.

The circumstances were different from the second round, when McEachern went to the passing game to rally from a 24-0 deficit at Lowndes.

“We had the mindset during the week that our run game was to go off, and we followed through,” Brown said. “We’re very confident in it. We have a lot of good backs, and if one of us goes down, someone else will step up.”

Leading 26-21 after Parkview’s Fred Payton completed a 33-yard touchdown throw to Miles Marshall with 9:26 left in the third quarter, McEachern began to pull away in the fourth.

Ruben Rodriguez made a 32-yard field goal early in the final period, and after a defensive stop and turnover on downs at the Parkview 29, Brown rushed in from 1 yard out to cap a six-play drive that put the Indians up 36-21 at the 6:19 mark.

McEachern’s Ali Scott recovered the onside kick, and Thornton ran in from 35 yards out four plays later for a 43-28 advantage.

Jordan Simmons’ 36-yard kickoff return to open the second half set McEachern up at the Parkview 34. Brown ran in from 24 yards out three plays later for the 26-14 lead.

Parkview had three drives inside the Indians’ 30, but failed to score. Jamil Burroughs had a sack and forced fumble, Michael Fairbanks caused a fumble and Tony Davis and Ty Gunn each had fumble recoveries. Cameron Moon also had a sack.

“Parkview ran the ball well and got down in scoring range a couple of times, but our defense showed up and forced some turnovers and got some pressure,” Hockman said. “Our running backs and offensive line did a great job. A lot of people contributing.”

Javan Baker had three catches for 68 yards and a touchdown for McEachern. Freshman quarterback Carlos Delrio-Wilson, who led last week’s rally at Lowndes, was shaky in his second start, going 3-for-14 for 61 yards, a touchdown and an interception. Malik Evans was 3-for-7 for 57 yards.

McEachern missed two point-after attempts in the first half, but it still led 19-14 at halftime, fueled by Davis’ 90-yard fumble return for a touchdown in the first quarter.

Fairbanks caused the fumble that gave the Indians the lead, but Malloy’s 1-yard touchdown on Parkview’s ensuing drive put the Panthers ahead by one.

Delrio-Wilson capped an eight-play drive on the Indians’ next possession with a 23-yard passing touchdown to Baker and a 12-7 lead to begin the second quarter, and Thornton’s 7-yard run 3 minutes later had McEachern up 19-7 with 9:03 left until halftime.