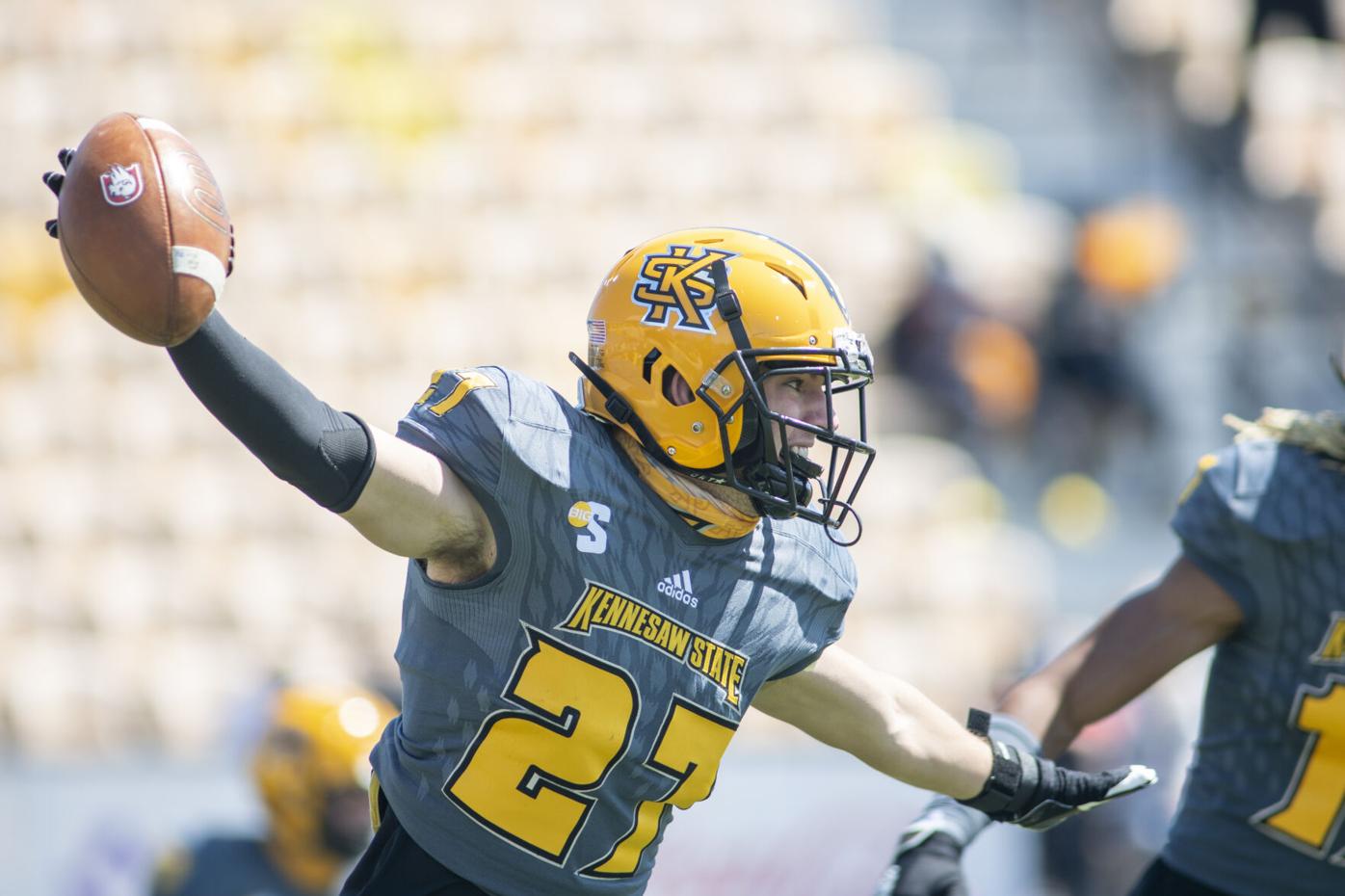 Cade Loden celebrates after returning a fumble for a touchdown in Kennesaw State’s game against Dixie State last spring. Loden and his older brother, Cole, will both be starting on the defensive side of the ball when the Owls open the season Thursday night against Reinhardt. 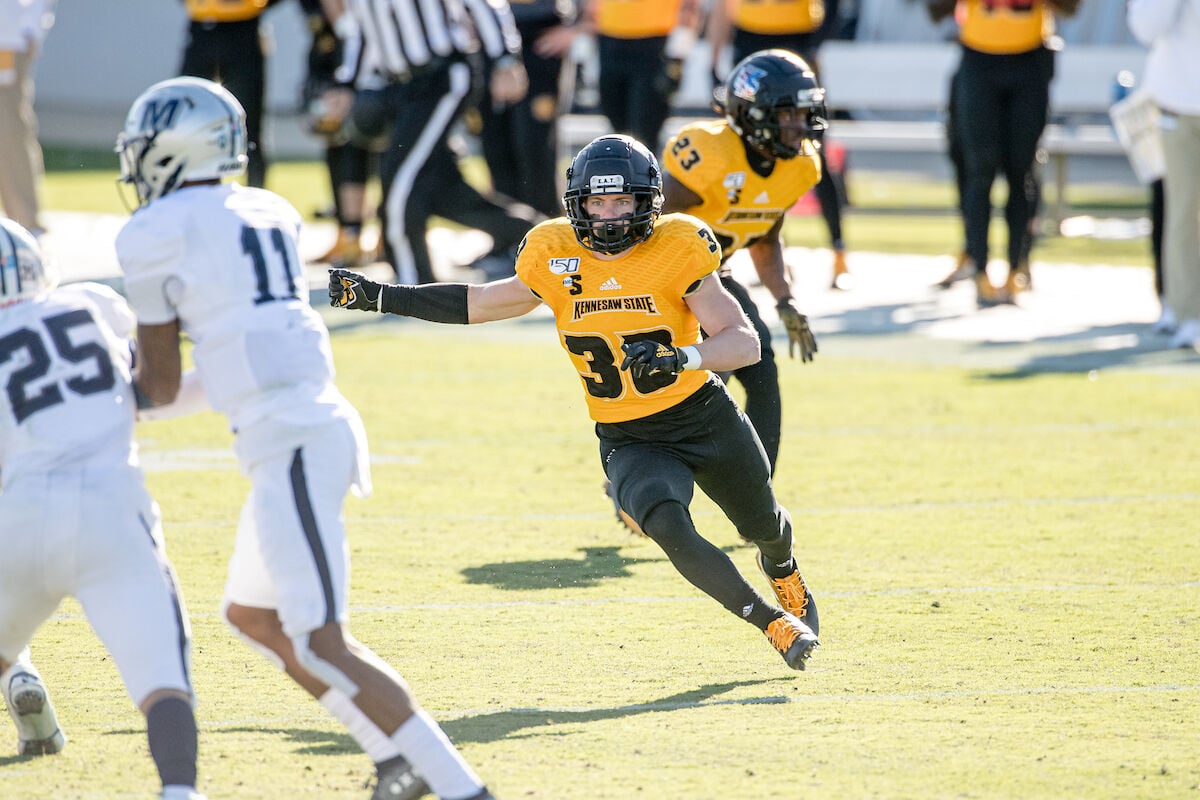 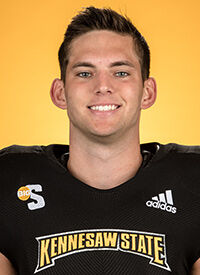 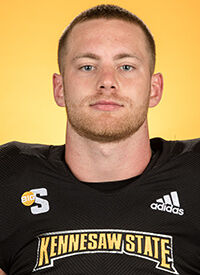 Cade Loden celebrates after returning a fumble for a touchdown in Kennesaw State’s game against Dixie State last spring. Loden and his older brother, Cole, will both be starting on the defensive side of the ball when the Owls open the season Thursday night against Reinhardt.

Brothers starting on the same unit for the same Division I football team are rare.

That is why it is likely to be something special for Cole and Cade Loden when they suit up next to one another when Kennesaw State hosts Reinhardt on Thursday to open the fall season at Fifth Third Bank Stadium.

Kickoff is scheduled for 8 p.m.

Cole Loden, a senior, will start at strong safety, while his younger brother, a sophomore, will handle the duties at strong-side linebacker. The fact they are starting together is nothing new — they did it while playing at Camden County High School — but to do in college is something else altogether.

“I think it’s something we thought about as kids,” said Cole Loden, who has played in all 32 games since arriving at Kennesaw State, and finished seventh on the team in tackles in the spring with 14, including 1½ for loss. “We kind of dreamed of playing together in college.”

Kennesaw State coach Brian Bohannon said he was happy the brothers will get to start, but as a father of two sons who played high school football together, he said he is happiest for the family as a whole.

The Lodens’ parents, Steve and Gretchen, will be making the 5½-hour drive from the coastal Georgia town of St. Mary’s to see the game.

“I’m excited for them. They both work hard, so we’re excited to see what they can do. It is unique, and I think it’s great for everybody else, but it’s great for that family. I think about mom and dad. They get to go to one place and watch their kids play Division I football instead of trying to figure out how to divide and conquer if their kids are at different places.

“I love they way they go about their business. They come in the building with a great attitude every day and I’m excited to see what they do.”

The Lodens are the first brothers to start for Kennesaw State in the same game, but they have already seen time together on the field. Both played on special teams during the shortened spring season, and it led to one of the biggest plays in family history.

In the second quarter of the Owls’ game against Dixie State, the brothers lined up on the punt return team. When the ball was snapped, Cole Loden backed up to prepare for a return, but as he did, he heard a cheer from the crowd. When he looked up, he saw his brother picking up a bad snap and running toward the end zone.

At that point, Cole Loden took off for the end zone, too. He said he clocked his fastest 60-yard dash of the year chasing his brother down the field.

“It’s probably my favorite football memory, watching him scoop and score,” Cole Loden said. “When I finally caught up to him, I stuck my face through the pile and we started screaming and laughing.”

While the touchdown may be Cole Loden’s favorite football memory, it is something that Cade Loden tries to stay away from.

“It’s a little bit of a sensitive subject,” said Cade, who was named the Big South Conference Freshman of the Week for his highlight play.

“Everybody is always bringing that up,” Cole said of his brother scoring a touchdown and not himself. “(Cade) knows not to bring it up.”

What Cade does is often smile in a way that tells his brother he has one up on him without actually saying it. Actually, he might have two, as Cole offered another tale from high school that the duo will always remember.

Cole returned kicks for Camden County, and Cade was supposed to be part of the back wall that blocked for him. In that instance, however, Cole said “blocked” is a relative term.

“He gave me one of those lookout blocks,” he said. “(Cade) ran right past the guy he was supposed to block, and I got hit so hard, I was seeing stars. He said he blocked the right guy, but it was 100 percent his fault.”

As a sophomore, Cade Loden will likely see plenty of field time in the future, but how many games he starts this year is still to be determined. Two of the players the Kennesaw State coaches are excited to see — North Carolina transfer Welton Spottsville and freshman Garland Benyard — Loden beat both to start in Thursday’s game.

Now, he has to go out and solidify his spot as the starter.

“We’ve been real competitive in camp,” Cade Loden said. “There was no one who who really came and told us who was starting. I found out when they sent out the depth chart.”

If Cade Loden does solidify his position, he will have at least three more seasons to make sure he keeps the family touchdown lead. Something Cole Loden said he is determined to change.

“I don’t want that hanging over me,” he said. “I’ve got to at least even it up, and I have one more season to do it.”

If it happens, there may even be some post-touchdown entertainment involved.

“We have a celebration dance,” Cole Loden said. “We’ve been practicing.”