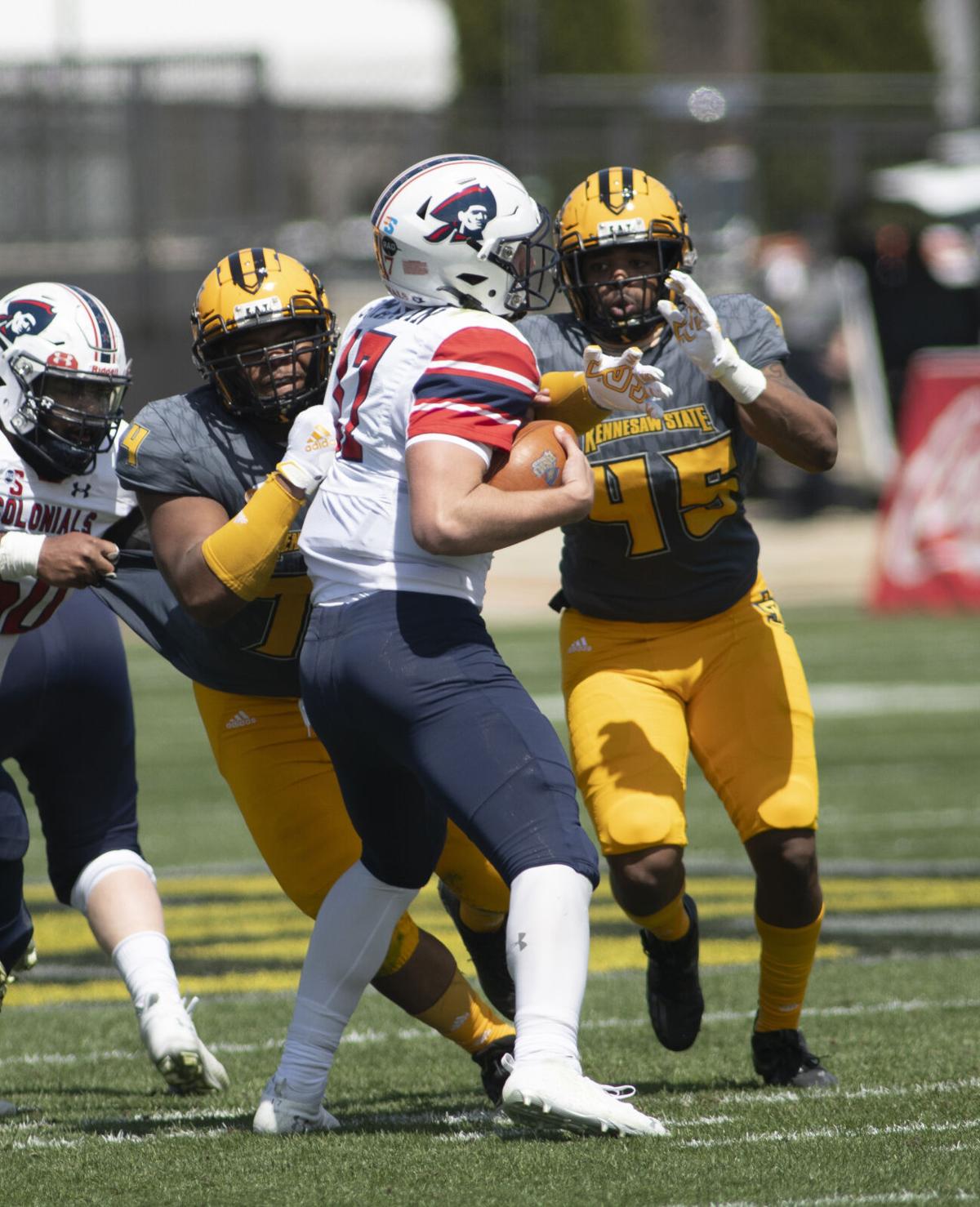 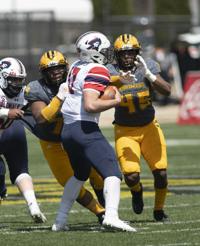 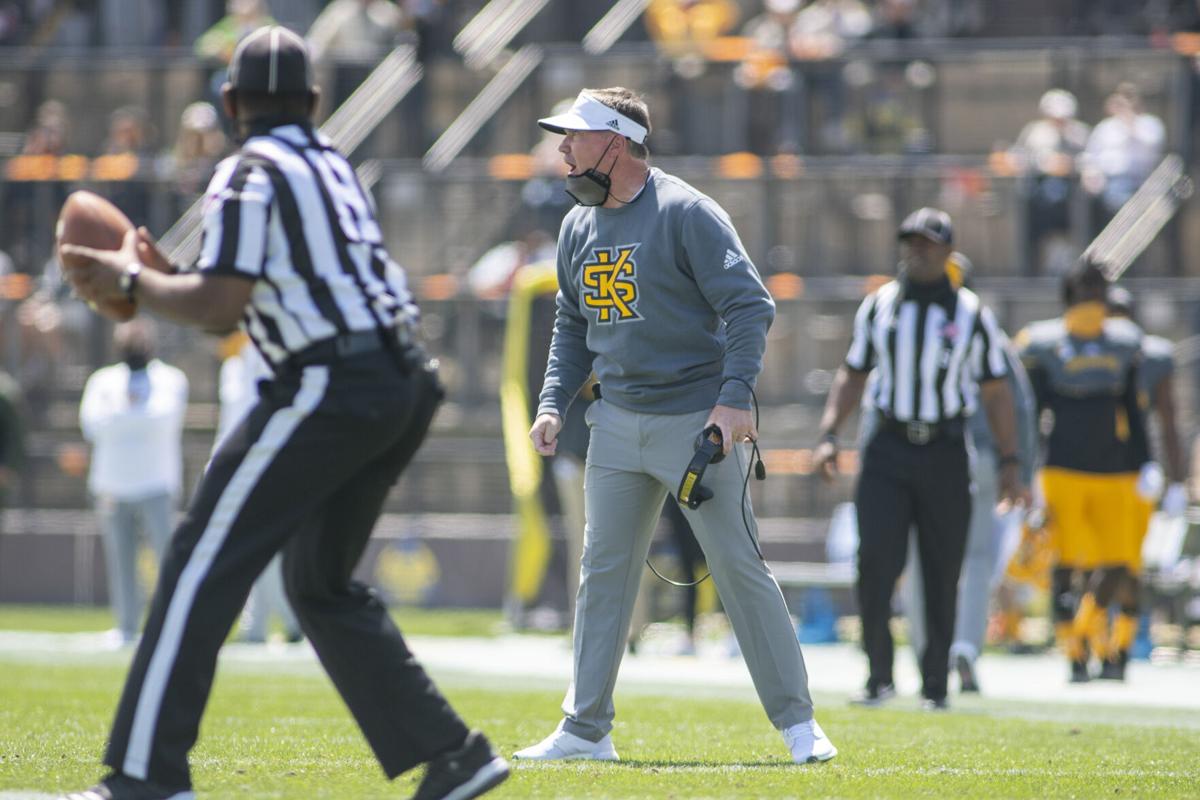 All season long, Kennesaw State coach Brian Bohannon has been concerned about his team having a lack of energy when it was time to kick off.

Last Saturday against Robert Morris, the energy was there, but there may have been too much energy.

The extra enthusiasm spilled over on the field and led to some uncharacteristic penalties. Twice, the Owls were called for unnecessary roughness, and once they were flagged for an unsportsmanlike-conduct penalty.

There were also false starts, an illegal substitution that backed Kennesaw State up on what turned out to be a missed field goal attempt, and a running-into-the-kicker call on fourth-and-4 to give Robert Morris a first down.

“There was definitely some mental stuff,” Bohannon said Tuesday during his weekly videoconference. “Some guys got frustrated and didn’t handle it well because of some of the things that were going on in the game.”

The things that were going on in the game were apparent early. There was a significant amount of finger-pointing and trash-talking going on, and it carried over into the plays, and sometimes after.

“The game was really chippy, and we kind of stooped to their level,” Bohannon said. “It’s always the second guy that gets caught, and we were the second guy all day, so there were a group of penalties in that classification that we can’t do. I don’t care what happens during the game — you can’t do it. You just have to go on play snap to whistle and don’t get caught up in that stuff, and then we had some mental things along the way as well.”

Penalties will be a much bigger deal Saturday when No. 7 Kennesaw State travels to No. 20 Monmouth.

The game in West Long Branch, New Jersey, will decide the Big South championship and who earns the conference’s automatic bid into the 16-team Football Championship Subdivision playoff bracket.

Monmouth (2-0, 2-0) beat Kennesaw State (4-0, 2-0) last year and kept the Owls from winning their third Big South title in a row, so Bohannon will be looking for more good energy, as well as the guys who play a little smarter and within themselves.

“I told them, one of those penalties can mean the outcome of a game,” he said. “At the same token, we brought some energy on Saturday. We brought some stuff that was really good, and we can build on that. There is a fine line on all that stuff, but we brought some energy. We came out as emotionally ready to play, as we have all year. That’s a real positive and stuff we have to build on going into this weekend.”

Kennesaw State quarterback Jonathan Murphy could have played against Robert Morris, but he was held out on the side of caution with Xavier Shepherd starting instead.

Now, as the Owls prepare to play for the Big South title, it appears as if Murphy will be back under center.

Linebacker Bryson Armstrong is beginning to make this a habit. For the third time this season, the Kell High School product was named the Big South Conference Defensive Player of the week.

Armstrong finished with six tackles, two tackles for loss and a quarterback hurry against Robert Morris, also adding an interception to the list. In the first quarter, with the Colonials driving, he intercepted a pass and returned it 75 yards for a touchdown.

Shepherd joined Armstrong in earning conference honors, as he was named Freshman of the Week. Shepherd made his first start of the season and carried the ball 19 times for 93 yards and a touchdown. He also completed all three of his passes for 45 yards and a score.

The Owls remained No. 7 in the STATS Performance FCS To 25 poll for a second week. In fact, the top nine teams all remained the same.

KSU’s future ASUN foe, Jacksonville State, moved back up to No. 10, Monmouth was No. 20 and East Tennessee State was No. 21. Gardner-Webb and Mercer also received votes.