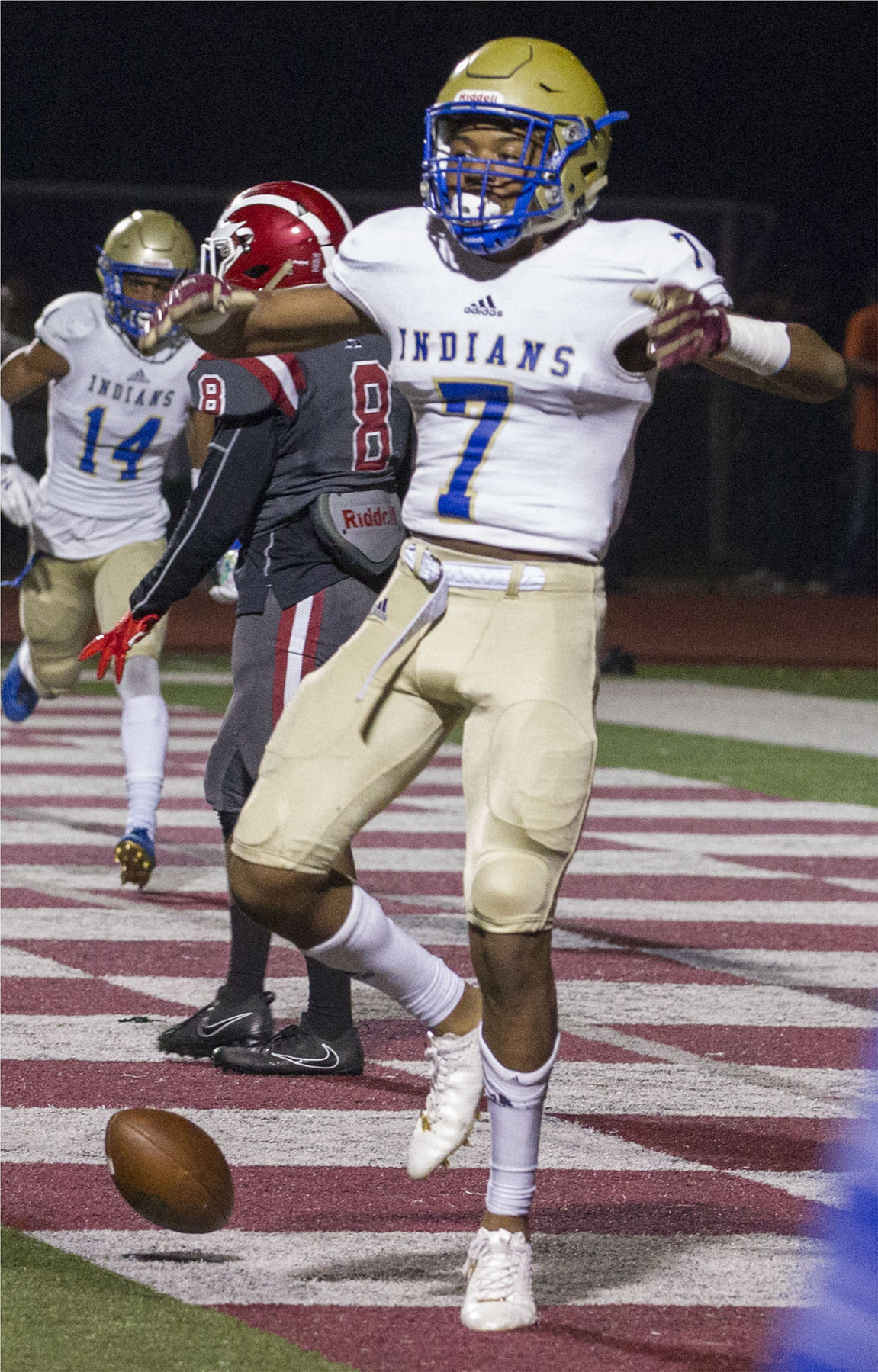 McEachern's GENUINE POTTS celebrates the Indians first score of the half against Hillgrove during Friday night's contest. Staff-Kelly J. Huff 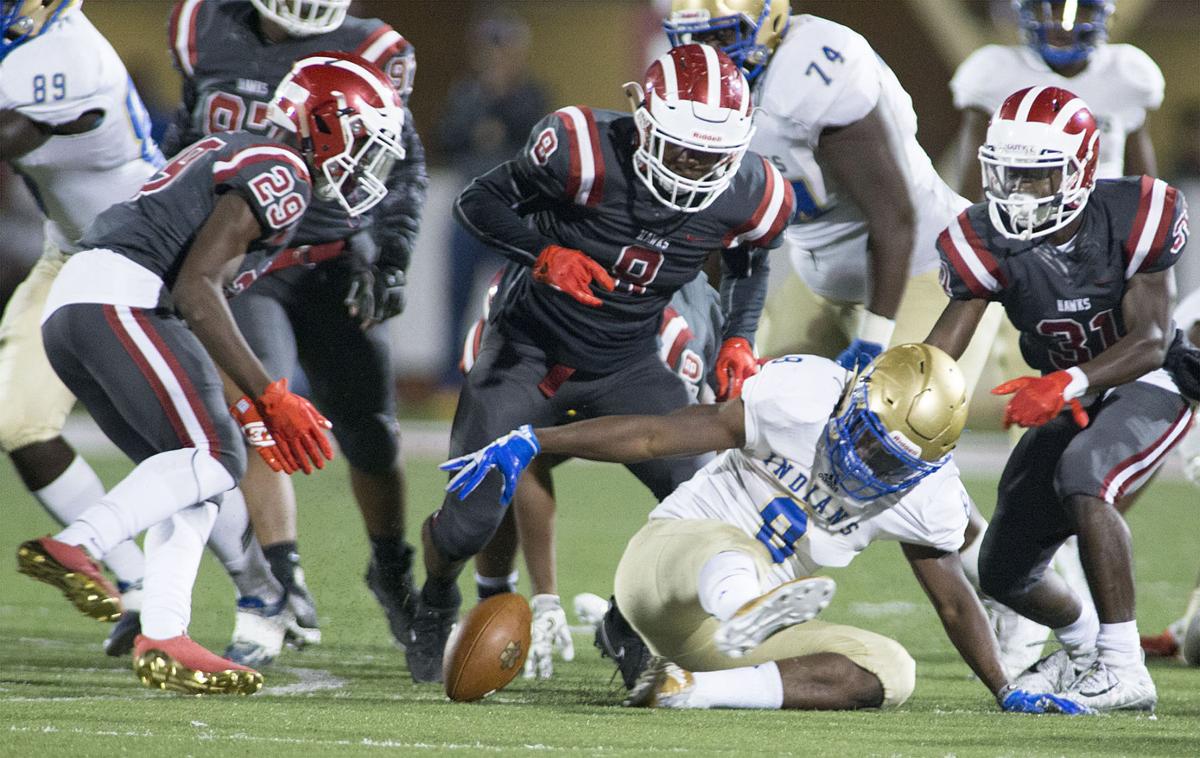 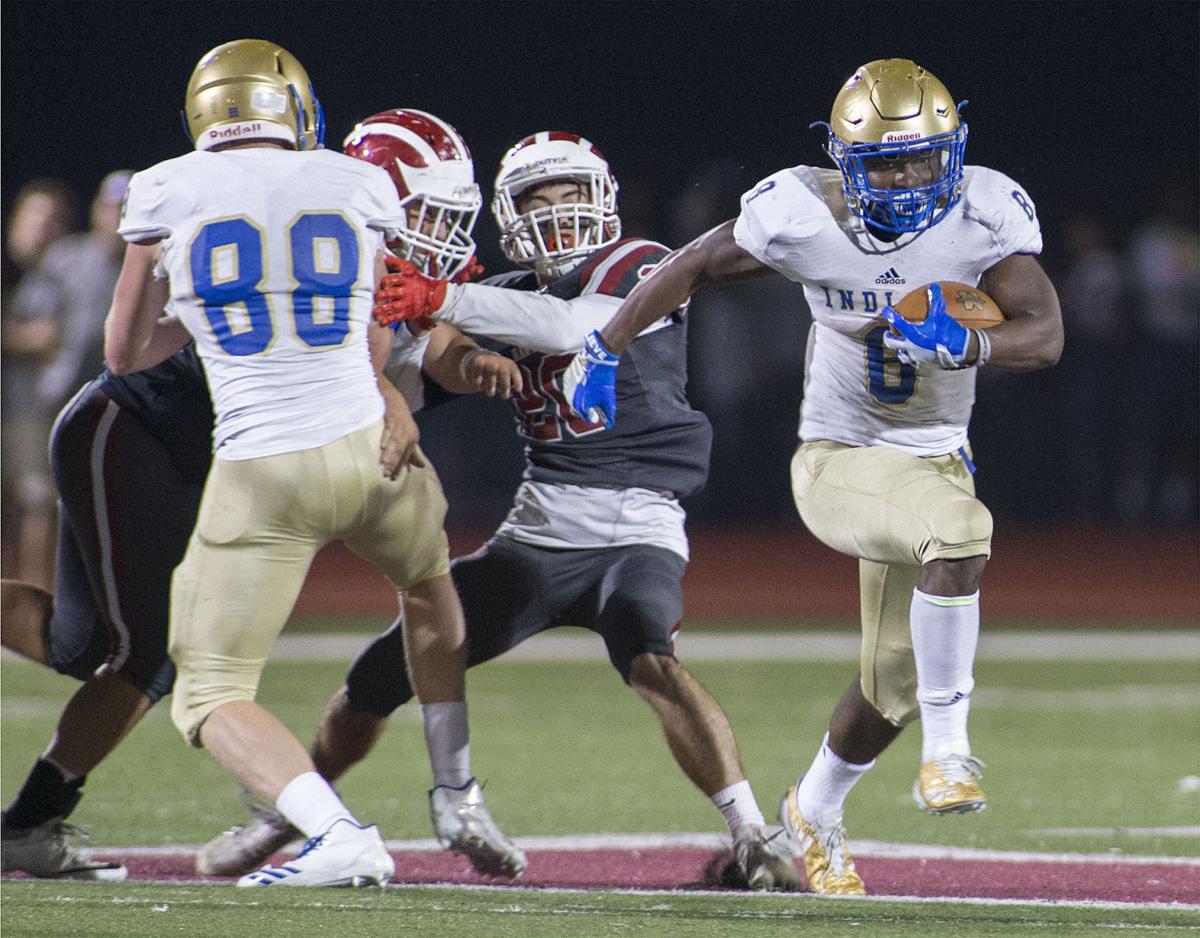 McEachern's PARIS BROWN is off to the races with a good block from his tight end AUSTIN JONES during Friday night's contest. Staff-Kelly J. Huff 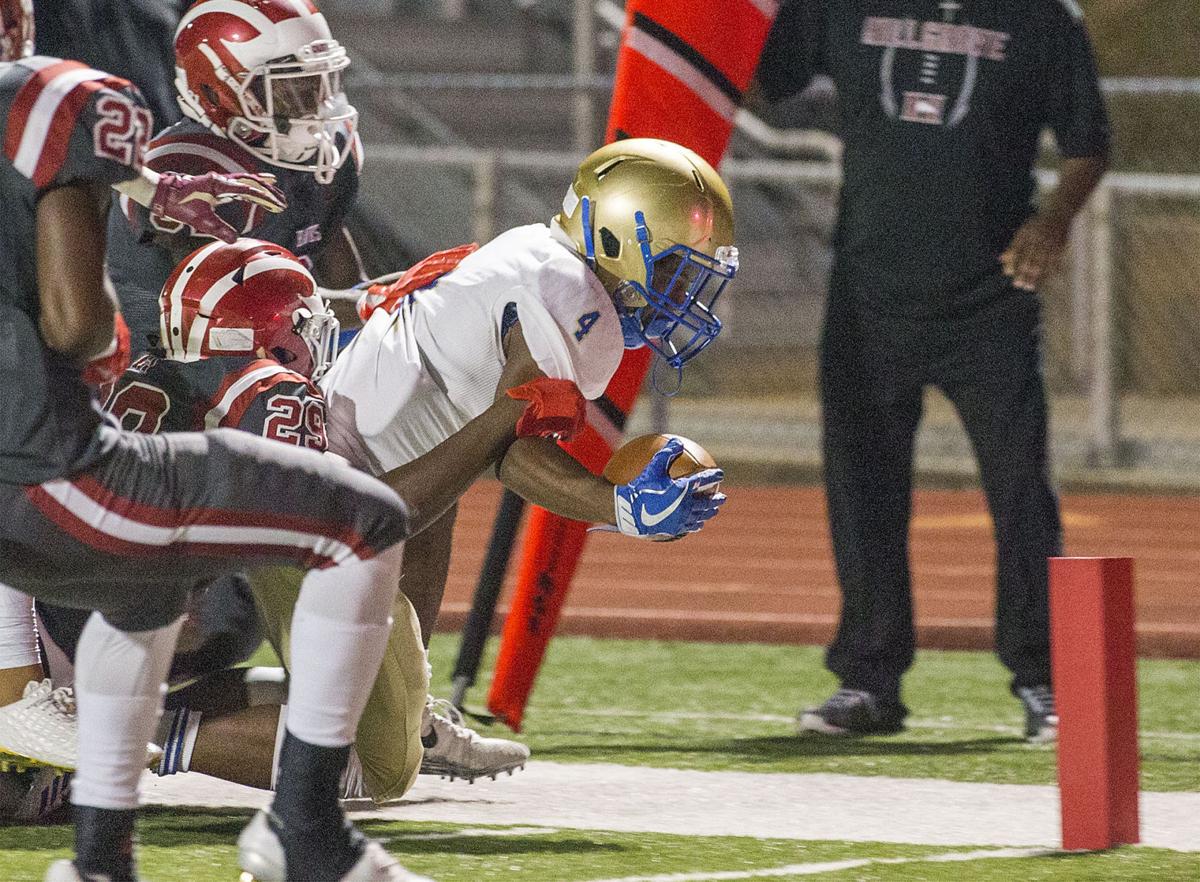 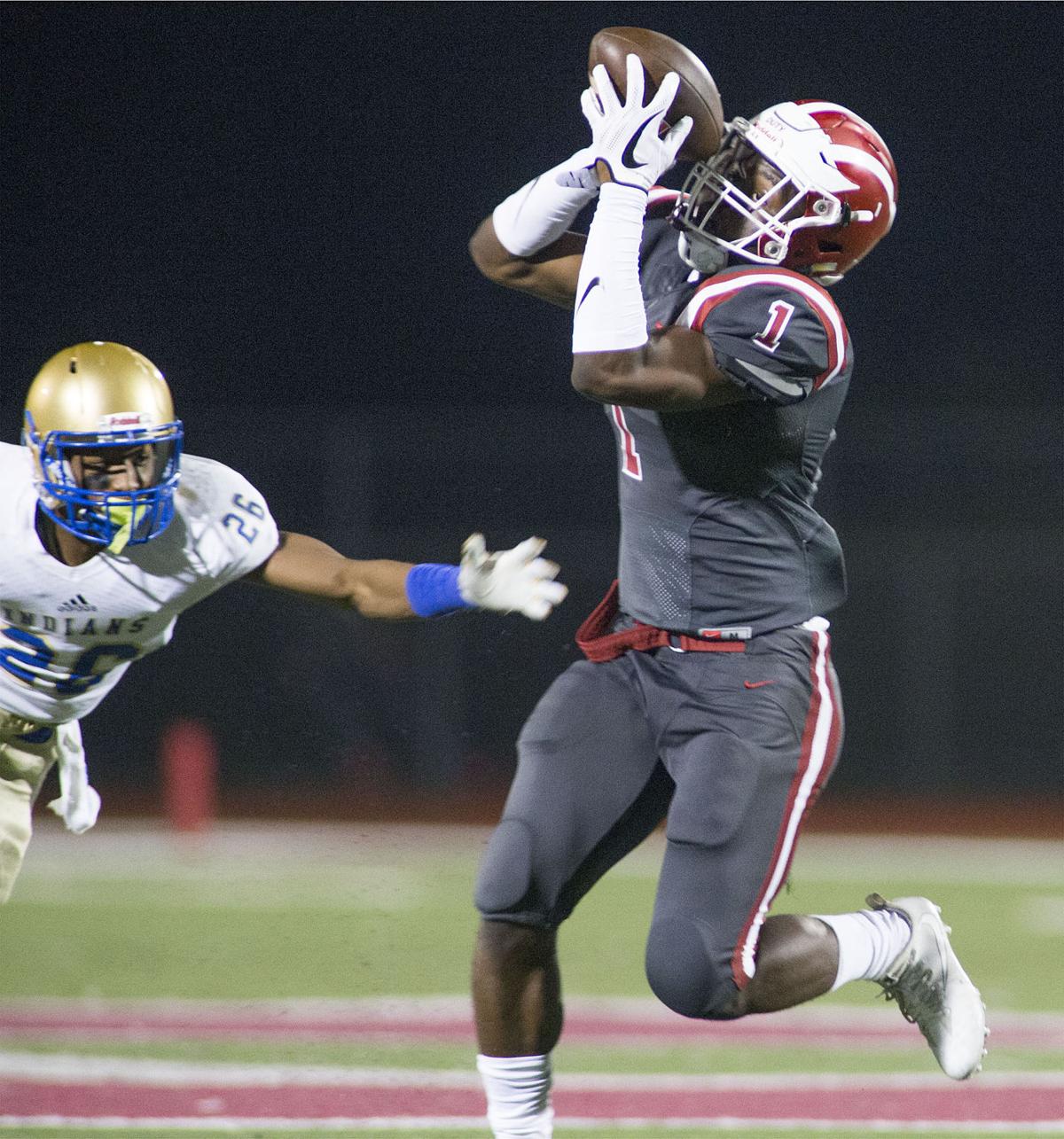 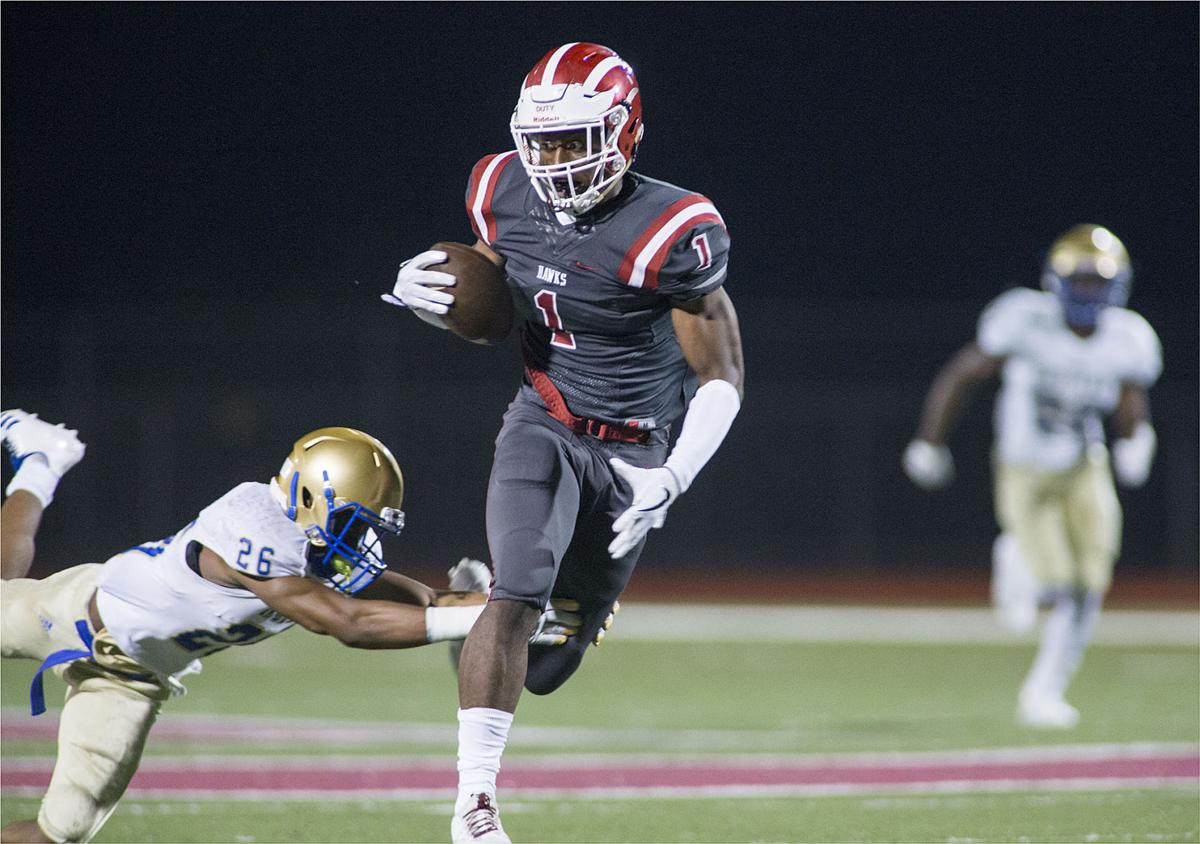 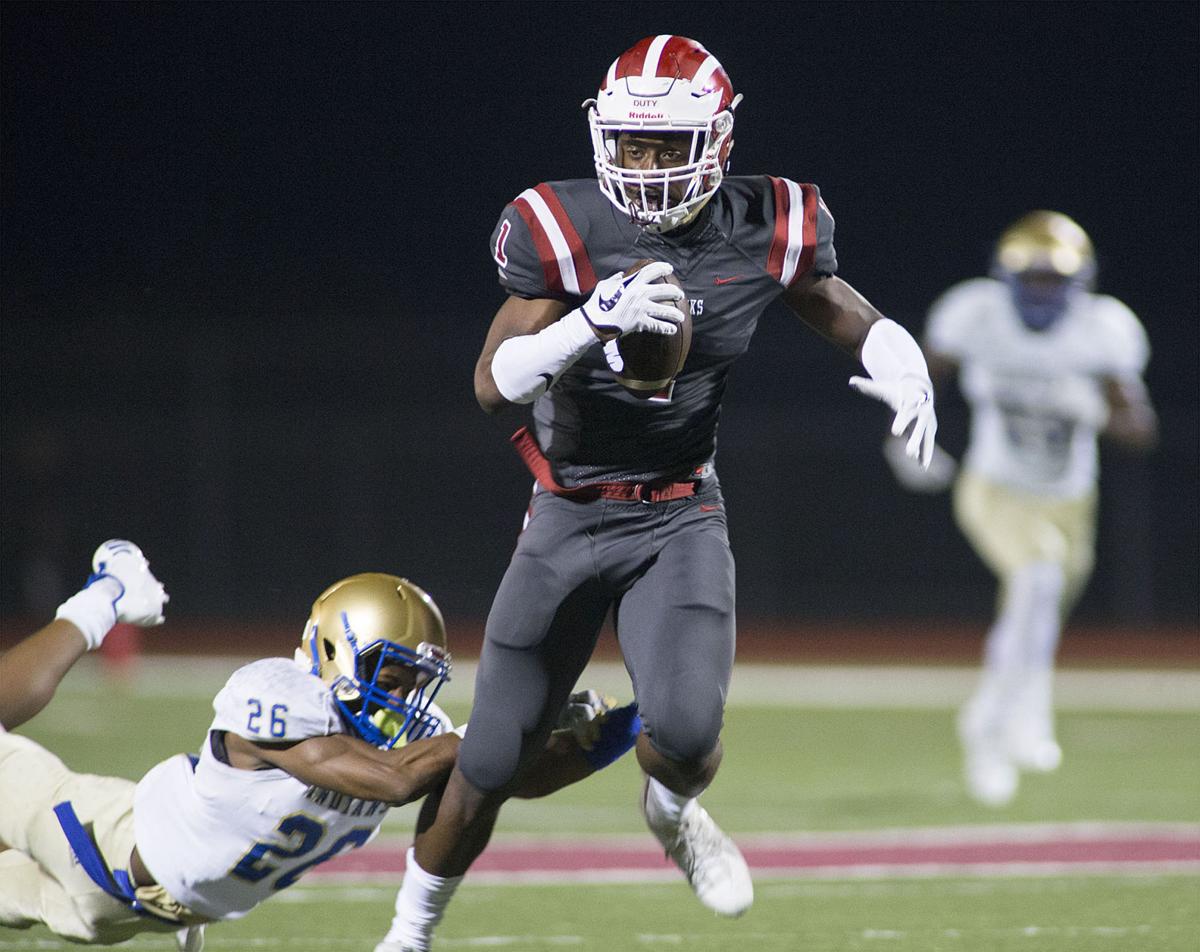 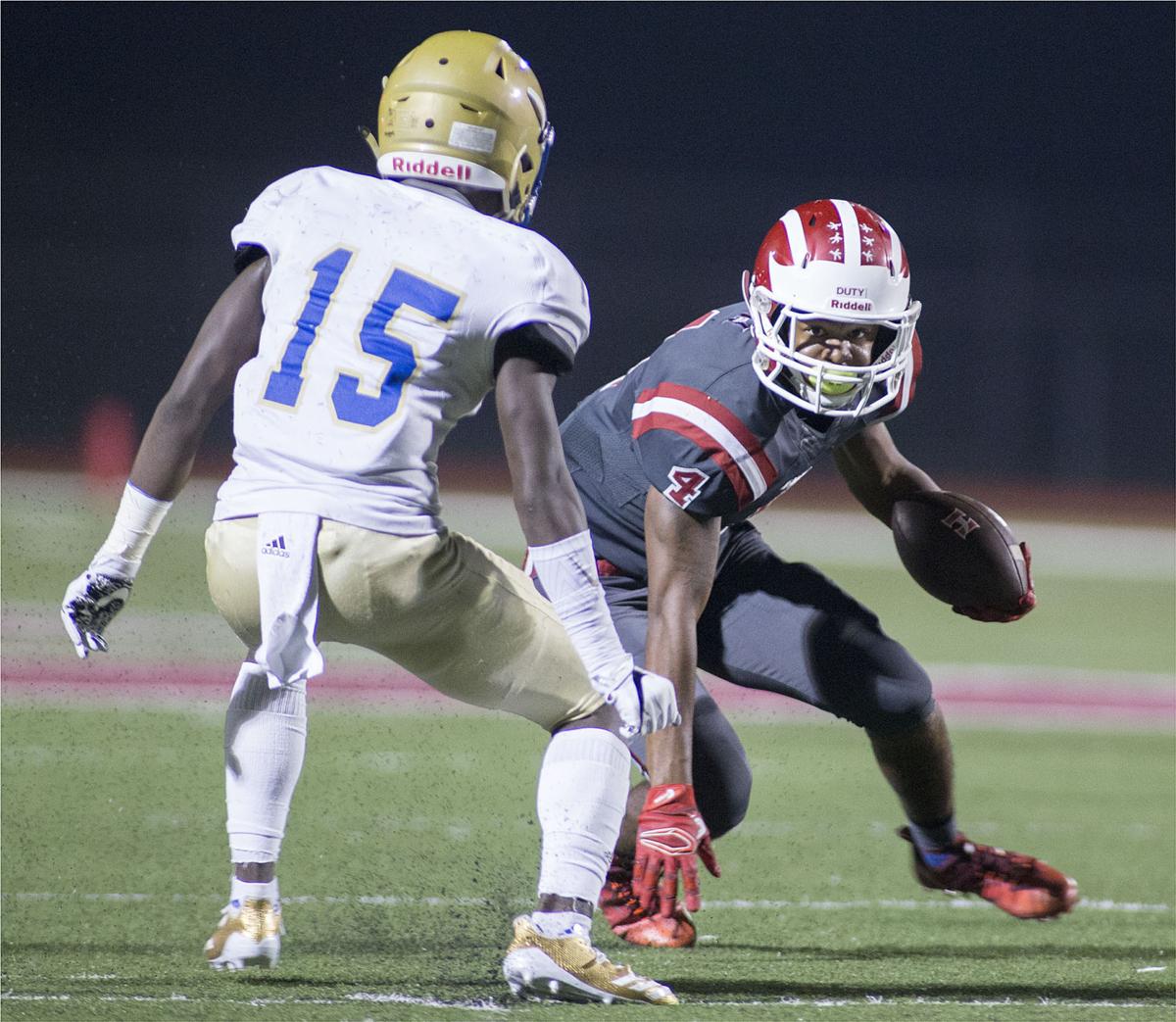 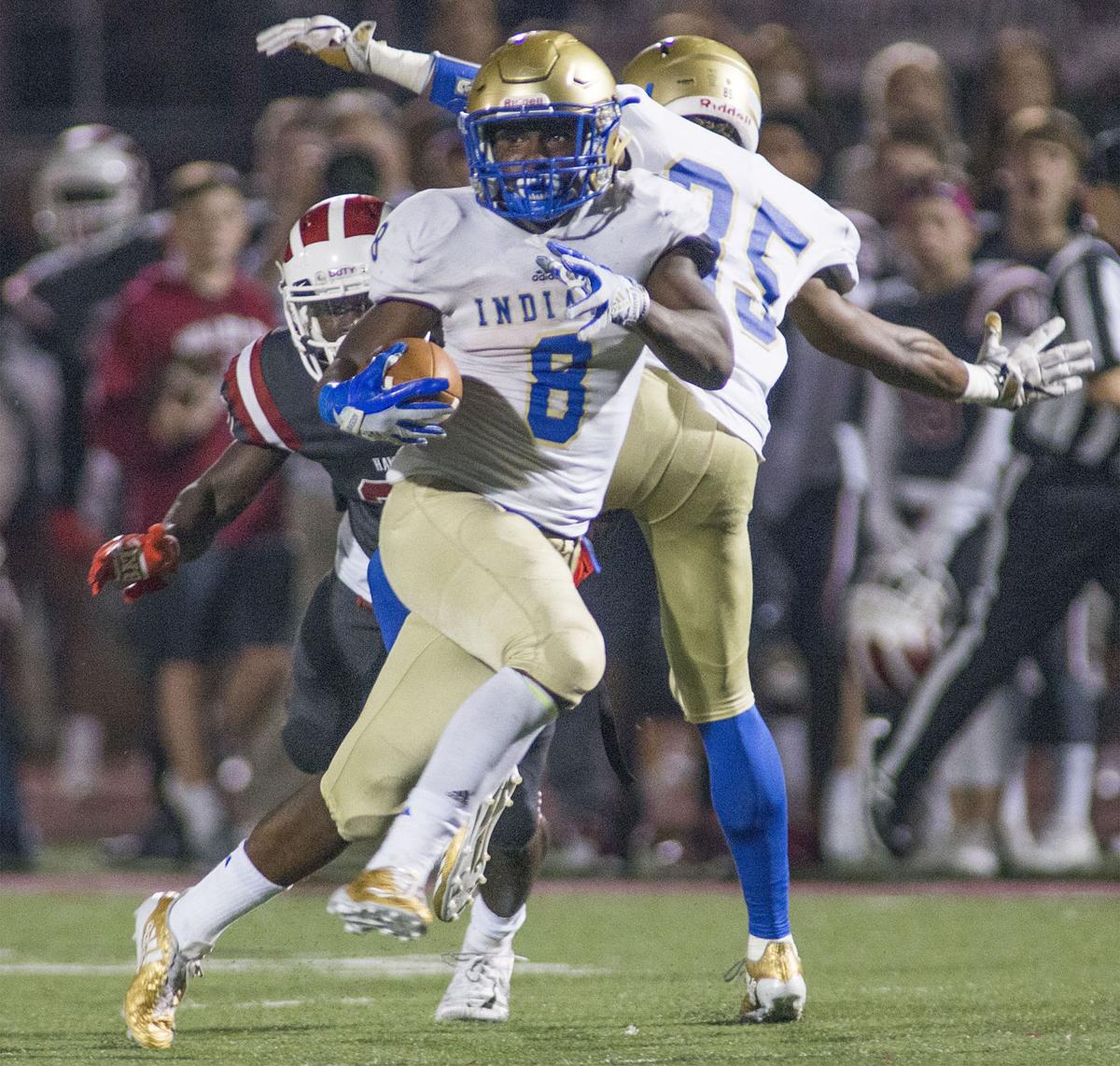 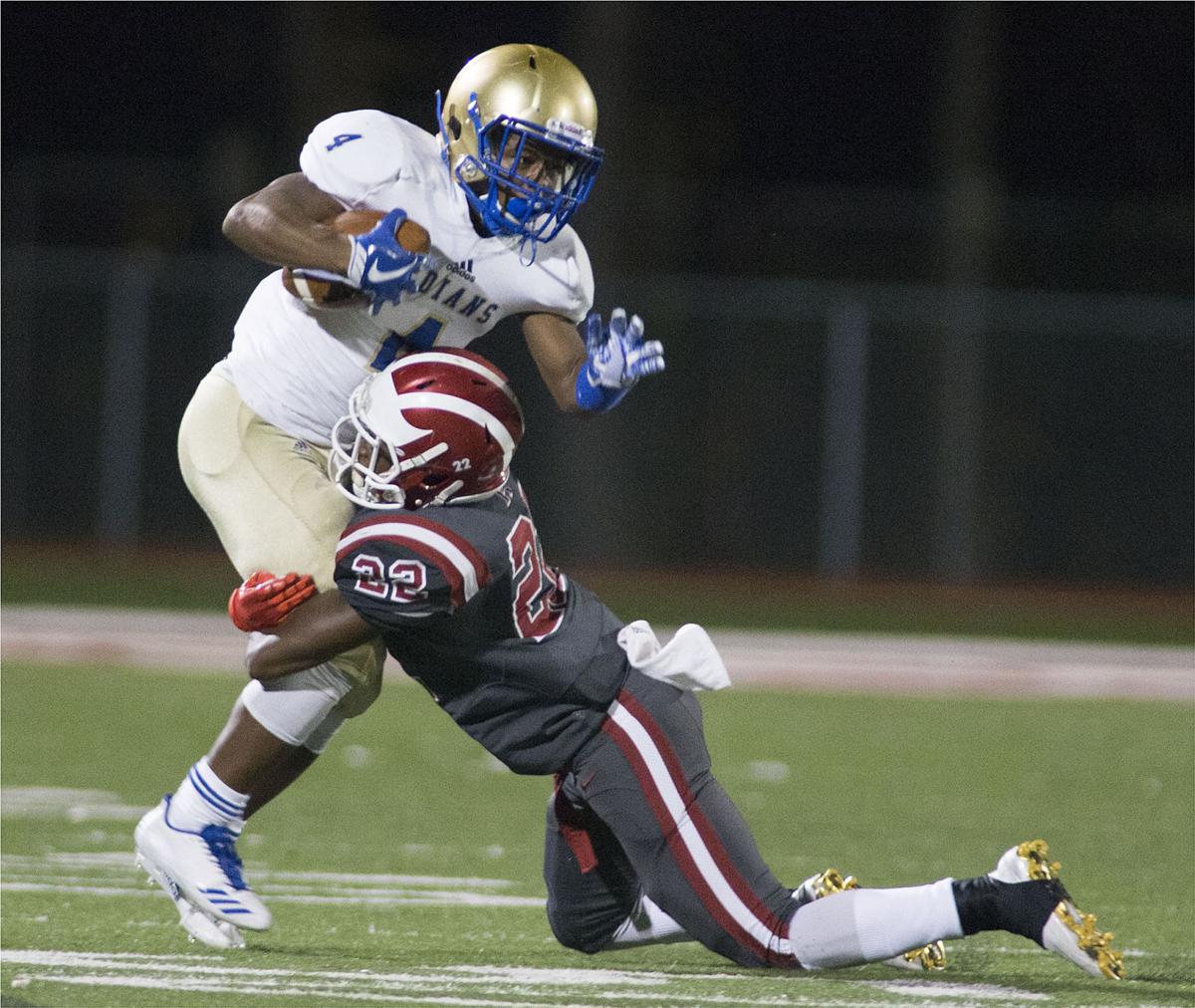 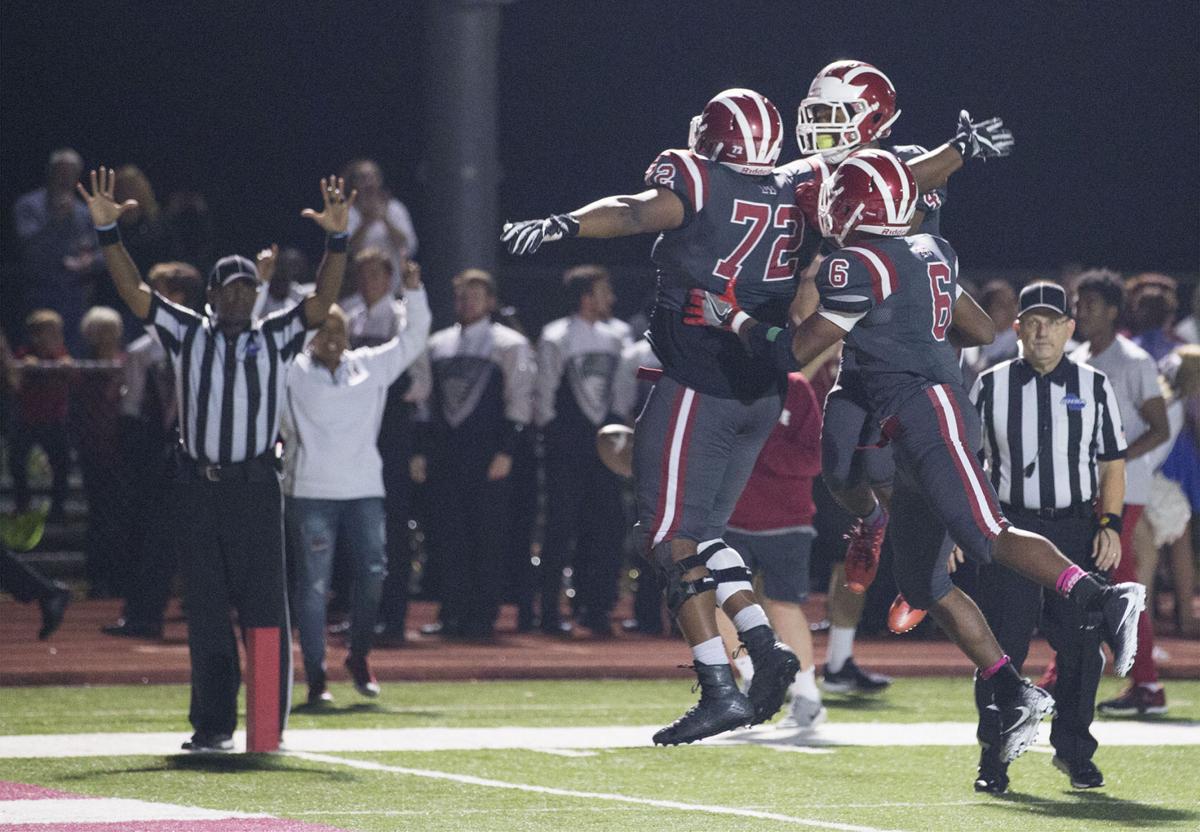 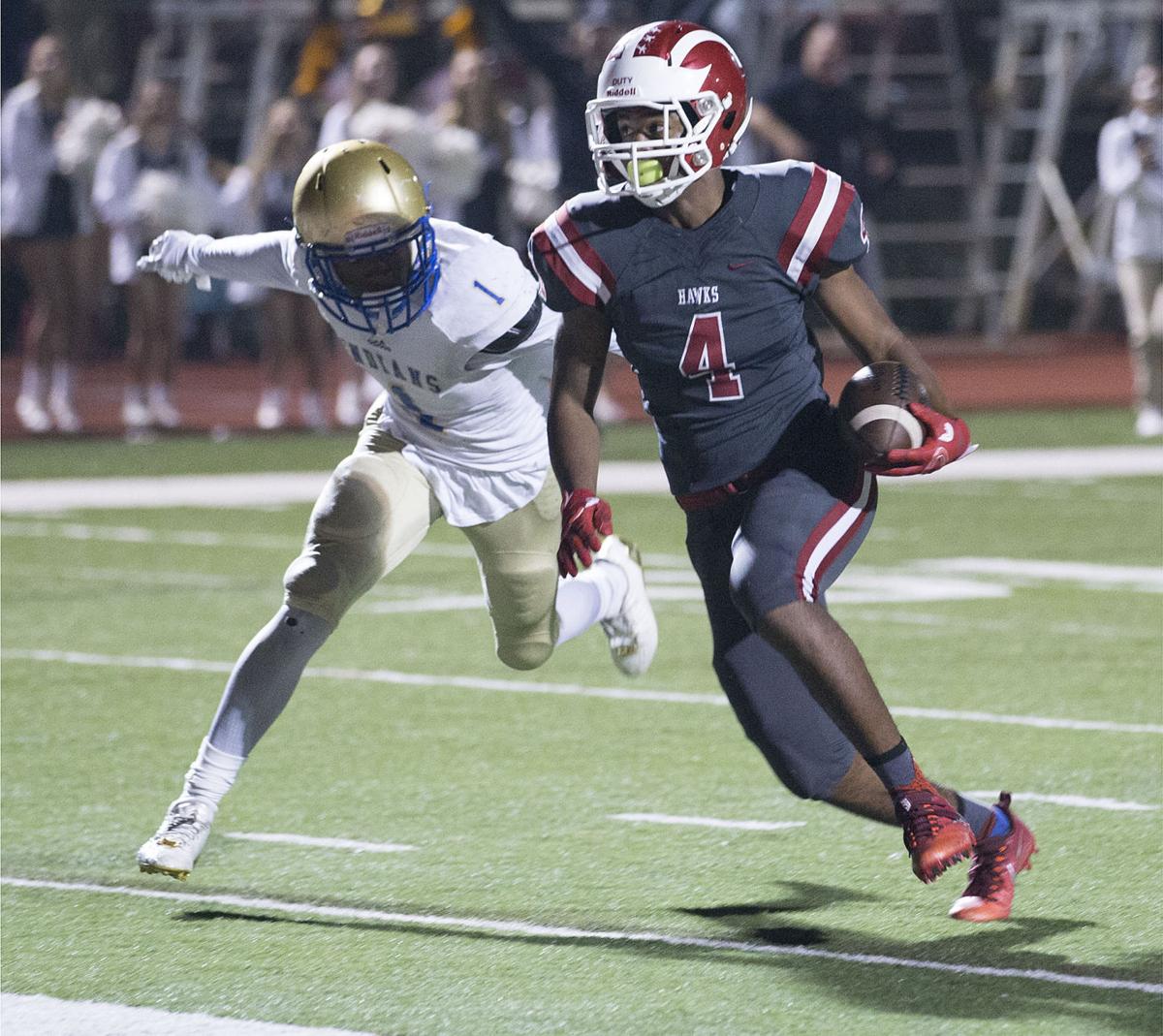 Hillgrove's JALEN JACKSON scores the first points of the game as the McEachern defender tries to catch up during Friday night's contest. Staff-Kelly J. Huff

McEachern's GENUINE POTTS celebrates the Indians first score of the half against Hillgrove during Friday night's contest. Staff-Kelly J. Huff

McEachern's PARIS BROWN is off to the races with a good block from his tight end AUSTIN JONES during Friday night's contest. Staff-Kelly J. Huff

Hillgrove's JALEN JACKSON scores the first points of the game as the McEachern defender tries to catch up during Friday night's contest. Staff-Kelly J. Huff

POWDER SPRINGS — Hillgrove won the opening coin toss and elected to defer to the second half.

It was the best decision the Hawks could have made.

Tied 7-all at halftime, Hillgrove went into a no-huddle offense following the intermission and drove 72 yards on 14 plays, capped by an 18-yard touchdown run from Hunter Arters to give the Hawks a 14-7 lead.

Hillgrove’s defense did the rest, holding seventh-ranked McEachern to 197 total yards and its lowest point total of the season, and giving the Hawks the Region 3AAAAAAA championship Friday night in the “Battle Down in Powder Town” at Cobb Energy/Hillgrove Stadium.

“Our last region championship was in 2014, and before that, we won in 2011, so we win one every three years,” Hillgrove coach Phil Ironside said. “I guess the next time we win will be in 2020. It’s a good feeling.”

Arters’ touchdown run was the difference, but it was his effort through the air that meant the most. The senior was 16-for-28 for 195 yards with a touchdown and an interception, while rushing two times for 13 yards and a score.

“This is an incredible feeling,” Arters said. “I’ve spent my whole life playing football with these guys, and I’m just proud to be a part of this team.”

Hillgrove converted for five first downs on the go-ahead drive, including a 13-yard pass to Jalen Jackson on third down that put the ball in McEachern territory.

“Hunter was so solid and just made some great decisions out there (Friday),” Ironside said. “I thought he played well, like a senior should. I’m happy for him.

Trevor Smith rushed 22 times for 59 yards, and Jaylen McCollough had 12 carries for 47 yards. Senior tight end Chigoziem Okonkwo played a big role in the first half and finished with three catches for 92 yards.

“Offensively, our pace and tempo against McEachern is always important,” Ironside said. “They’re so good defensively, we wanted to try to wear them down. You have to get into a rhythm against those guys, so we adjusted our offense at halftime and stayed the course.”

Hillgrove had more opportunities to put points on the board, but the Hawks missed three field goals to keep the game close.

Hillgrove’s defense, led by Myles Murphy, Lance Wise, McCollough and Reuben Lowery, made sure the missed field goals would not matter. Murphy had a sack and provided pressure in the back field, while Wise recovered a fumble midway through the fourth quarter.

“Our game plan was to stop the run and put pressure on the quarterback and make them throw the ball,” Murphy said. “Our goals at the beginning of the season was to beat McEachern and win the region. We did both on one night.”

The teams went into halftime tied at 7-all. Following a scoreless first quarter, Hillgrove got on the board first when Arters connected with Jackson on a 10-yard scoring strike with 5:05 left in the second period.

It was special teams play that helped deliver the tying score for McEachern. After forcing Hillgrove to go three-and-out on its next possession, Dante Fleming stepped in front of Jason Pierce’s punt attempt, and blocked the kick 26 yards backwards to the Hawks’ 14.

On the first play of the series, Malik Evans passed over the middle of the field to Genuine Potts for a 14-yard touchdown, knotting the contest at 7-all.

“We had opportunities but couldn’t make any plays, plain and simple, on both sides,” McEachern coach Kyle Hockman said. “We had a pick-6 dropped and a flea-flicker dropped that would have been big plays, but, basically, Hillgrove made plays and we didn’t.”