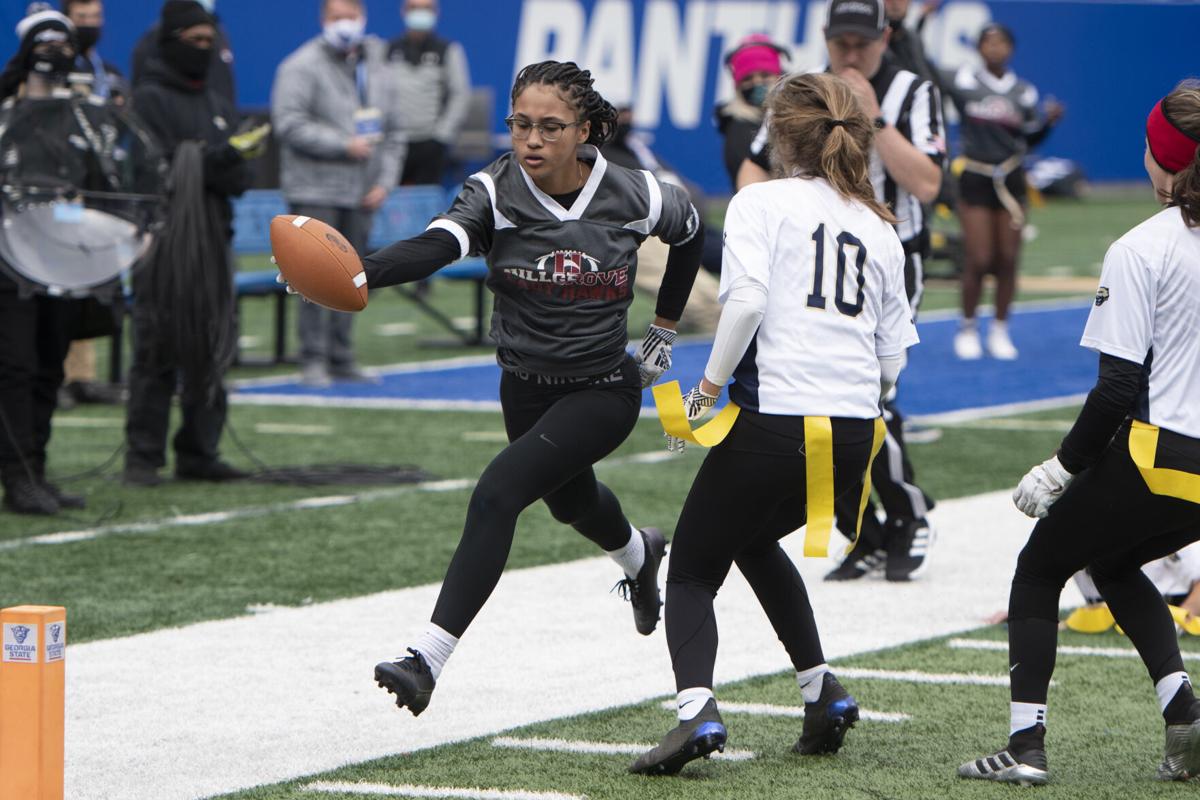 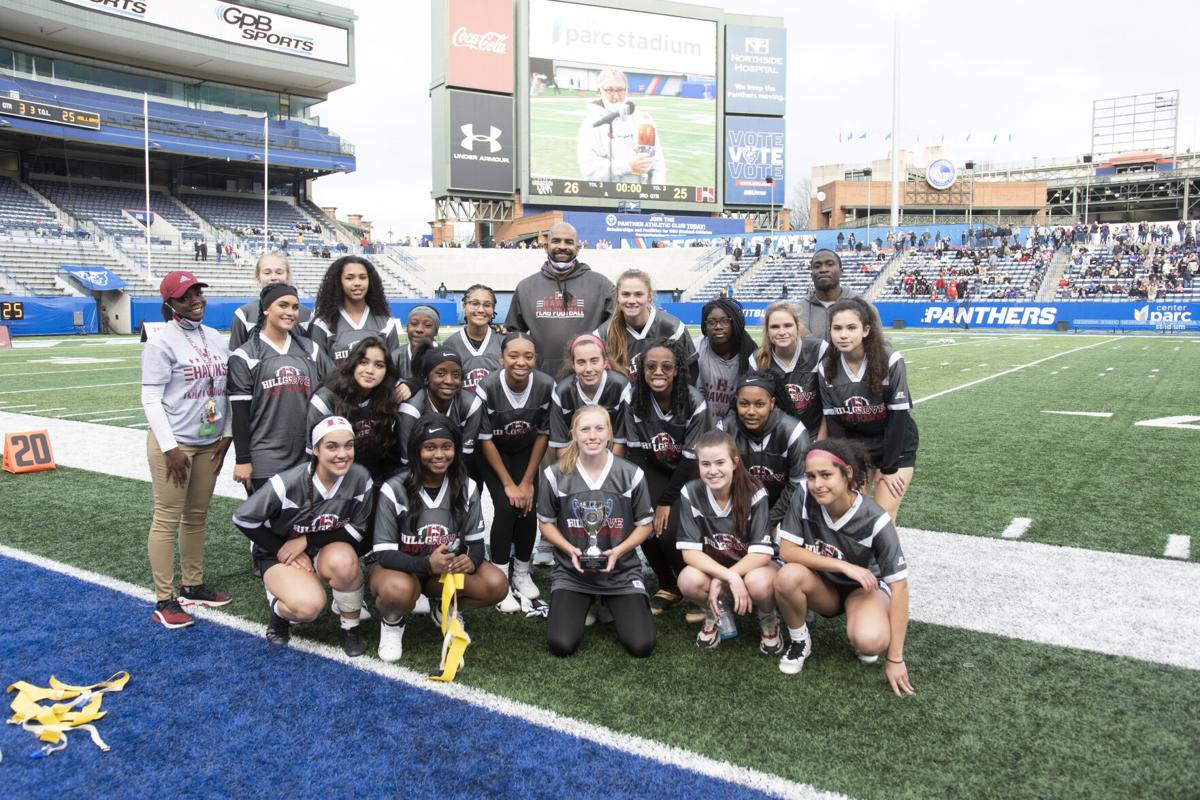 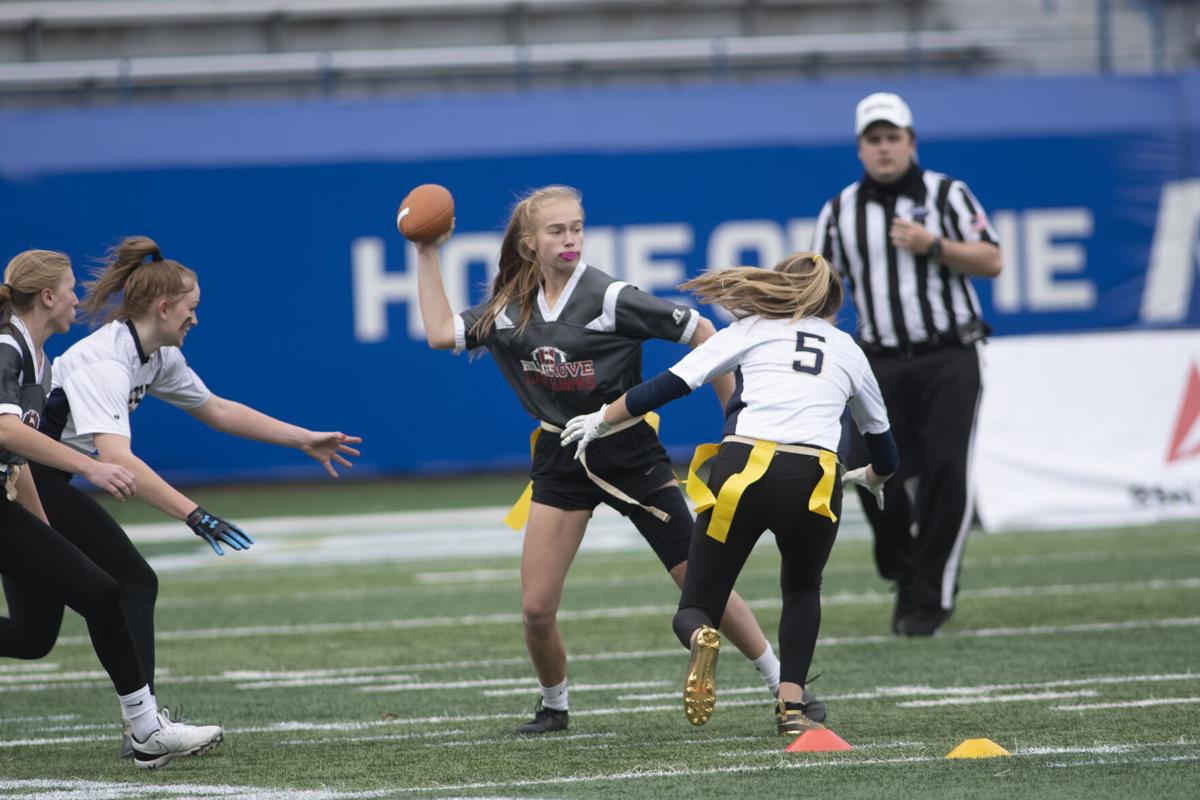 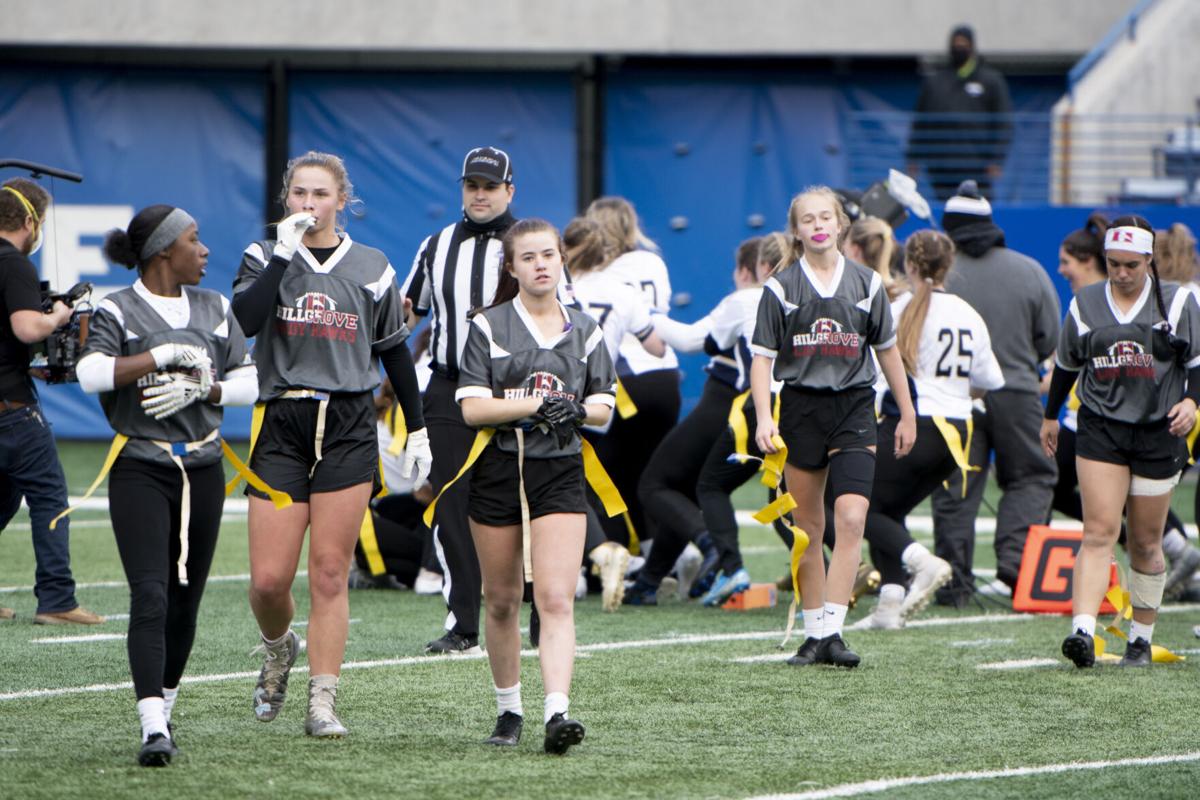 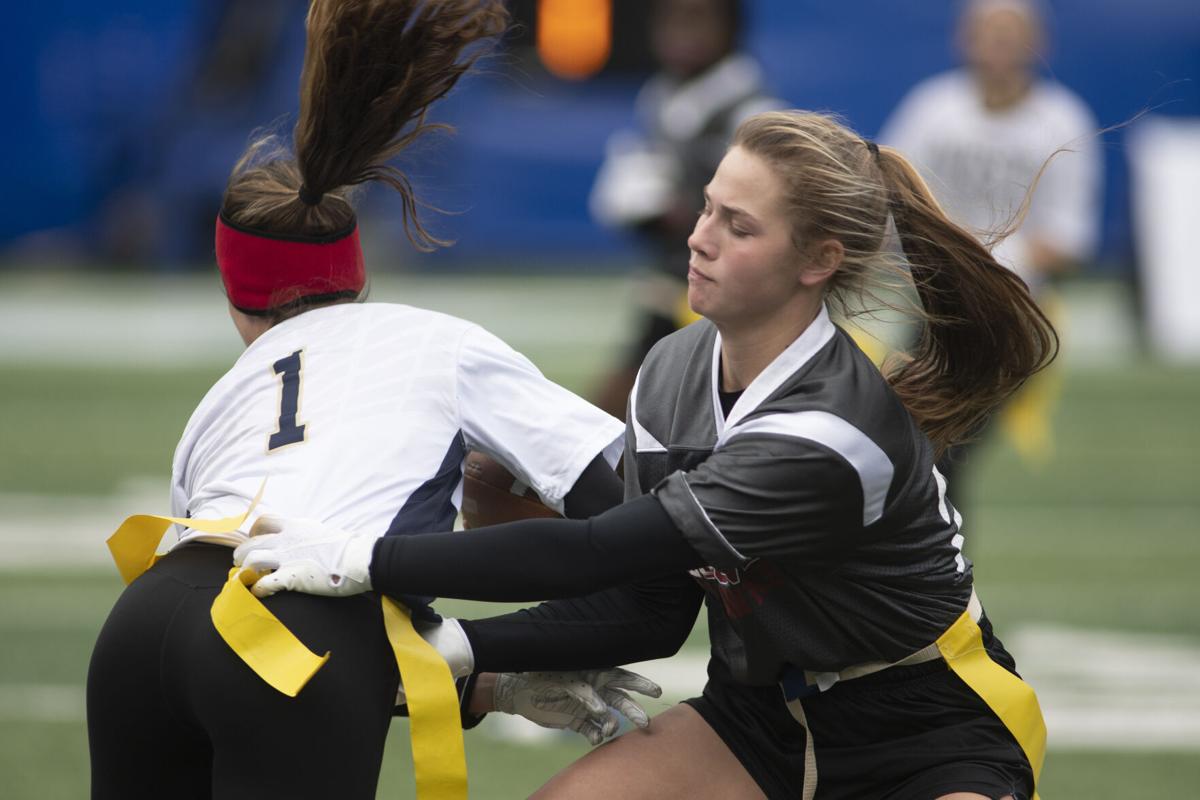 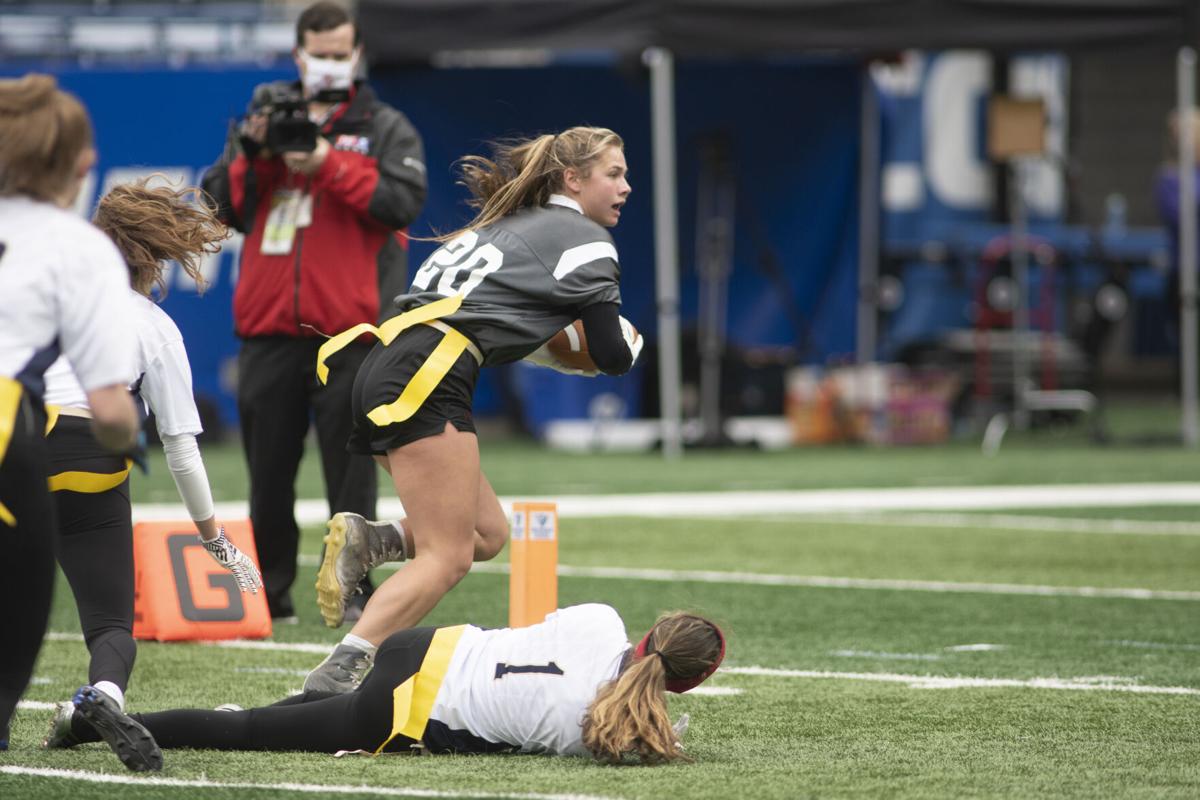 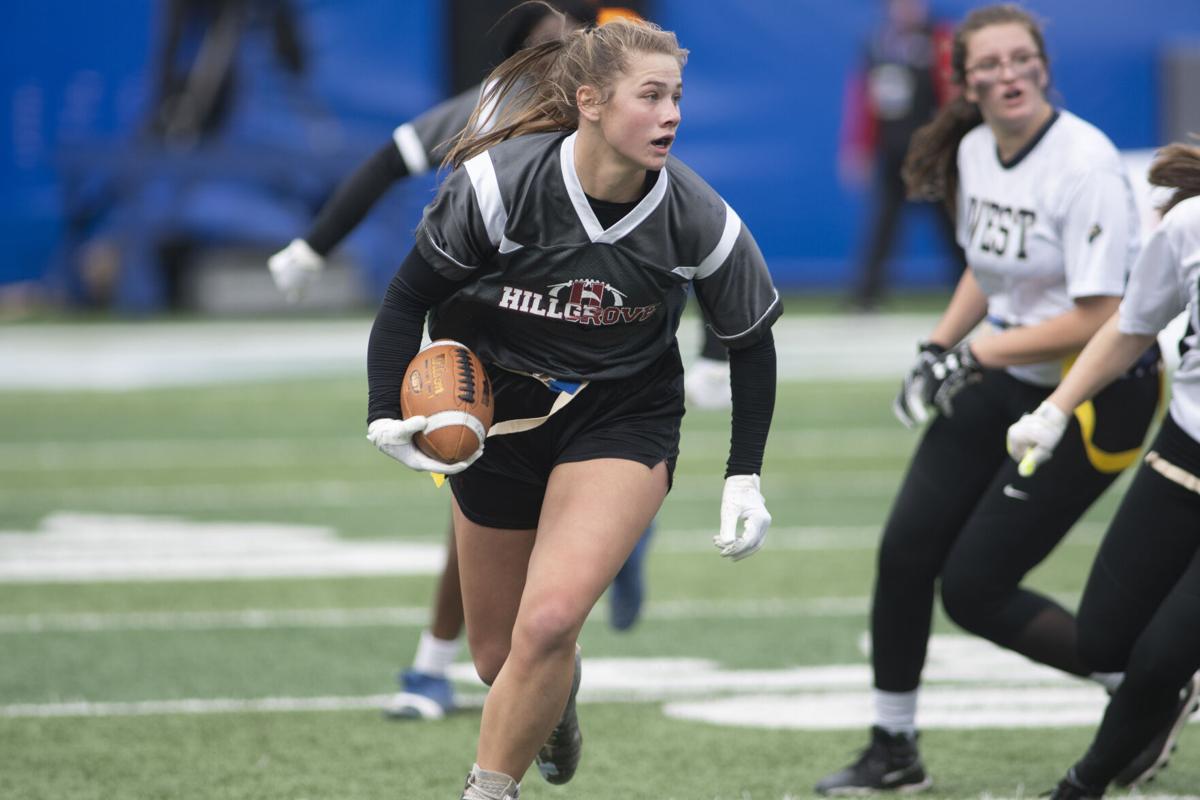 ATLANTA — Haylee Dornan dove just inside the pylon for the extra point to give West Forsyth a 26-25 double-overtime victory over Hillgrove in the inaugural Class 6A-7A Girls Flag Football state championship game at Georgia State’s Center Parc Stadium on Monday.

Just moments after the official signaled that the point was good, the play was replayed on the Jumbotron inside the stadium, and it didn’t take long for the boos to reign down from the Hillgrove faithful. It looked as if Lindsay Bell had pulled Dornan’s flag just before the ball crossed the plain of the goal line, but unfortunately for the Lady Hawks, there was no replay review.

The outcome was a jolt after Hillgrove had dominated the second half and pushed West Forsyth to the limit.

“It was an absolute honor to coach these ladies,” Lady Hawks coach Daniel Pinckney said. “All we ever asked was to have a shot to win in the end, and we got our shot and it came down to a controversial call at the end.”

It didn’t look like Hillgrove was going to get that shot in the first half. Two drives deep in West Forsyth territory failed to produce points. West Forsyth didn’t have that issue scoring on a pair of long touchdown passes from Dornan to Caroline Coggin for a 13-0 lead.

Pinckney said he had a direct conversation with his team during the break.

“I told them they had a choice,” he said. “They could shrink, or they could rise to the occasion. They chose to meet the challenge head on.”

Early in the second half, an interception by Kaylan Sacus set Hillgrove up in West Forsyth territory. Four plays later, Bell connected with Lauren Render for a 29-yard touchdown pass. The extra point was good and the Lady Hawks cut the lead to 13-7.

With 4:16 to play, Render intercepted a pass and returned it 30 yards to the West Forsyth 19. An 11-yard run by Bell, followed by a touchdown pass to Erica Carelton tied the game and sent it to overtime.

In the first overtime, Hillgrove missed a chance to put the game exclusively in its hands. On defense to start, the Lady Hawks had West Forsyth in a fourth-and-goal situation from the 19. They put pressure on back-up quarterback Coggin, but she was able to keep a play alive and connected with Sara Lemley in the corner of the end zone.

The Lady Hawks needed only two plays to tie the game at 19-19 when Bell connected with Render with a 15-yard touchdown pass. West Forsyth stayed a live by knocking down the extra-point pass.

Hillgrove took its first lead of the game on the first possession of double-overtime when Bell connected with Jasmine Blackmon on a 7-yard touchdown pass. Again, the extra-point pass failed, and the Lady Hawks led 25-19.

Dornan needed runs of 10 and 5 yards to tie the game and set up the deciding extra point.

It was a tough way to end the season, especially since Hillgrove had gotten into the state playoffs as a No. 4 seed and then won four road games to make the state title game.

Dornan led West Forsyth completing 9 of 16 passes for 148 yards, two touchdowns and two interceptions. She also ran for 62 yards and a touchdown. Coggin finished the game with four receptions for 95 yards.

Despite the outcome, Pinckney said advancing to the state title game was more than the Lady Hawks could have expected before the inaugural season began.

“Not a chance (did I think we would be in this position),” he said. “We had a lot of interest, but you never knew what to expect with COVID. But they were committed. They wanted to learn. Slowly but surely they started to understand and when they started talking ball back to me, I knew we were going to be something special.”