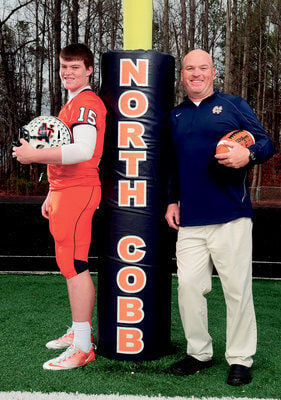 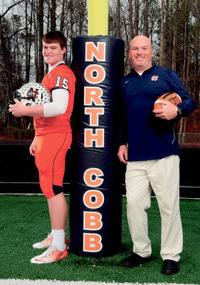 Tyler Queen was the quarterback for his father, Shane Queen, at North Cobb from 2011-14. Now, he is back as part of the Warriors’ coaching staff. 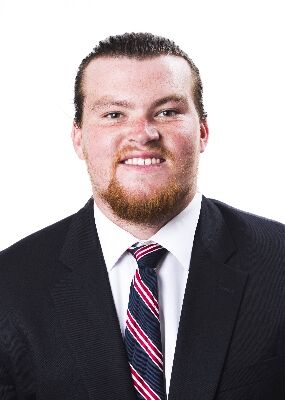 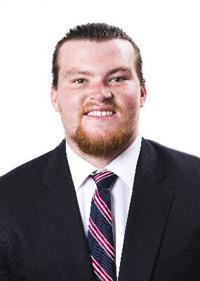 Tyler Queen is back where he wants to be — on the sideline for the North Cobb football team.

The former Warriors standout and Auburn quarterback is teaching psychology at his alma mater and is settling in working for his father, Shane Queen, as a new member of the coaching staff, in charge of the wide receivers.

Whatever the younger Queen is doing with the receivers must be working.

But as well as his unit is performing, Queen probably can’t help but close his eyes and think back to 2012 when he watches current North Cobb quarterback Malachi Singleton.

The sophomore has led North Cobb to a 2-0 record with wins over Sprayberry and perennial state power Buford. In those games, he’s run for 198 yards and four touchdowns, and he’s completed 18 of 22 passes for 319 yards and three more scores.

It was eight years ago when Queen took over under center as the starting quarterback. During his sophomore season, he led the Warriors to an 11-3 record and a spot in the state semifinals. That year, he threw for 2,607 yards and 23 touchdowns, while also running for 926 yards and 20 TDs.

That season opened a lot of eyes, and it led to Queen committing to Auburn in the spring before his junior season. However, after a solid year on the gridiron, Queen injured his elbow playing baseball for the Warriors. If he would have concentrated on a career on the diamond, he would have had to undergo Tommy John surgery because of a partial tear of his ulnar collateral ligament, but rest and rehab allowed him to continue on as a quarterback.

Unfortunately, when Queen got to spring practice at Auburn in the spring of 2015, the injury resurfaced. A nerve in his elbow shifted the wrong way across a bone and he was unable to throw.

By the time Queen got healthy again, he was too far down the depth chart to work his way back to serious playing time. He eventually transferred from the SEC to Division II West Georgia, where he split his time between playing quarterback and tight end.

Does Queen ever wonder where he would have been without that injury?

“If you play football, you dream of playing at the highest level,” Queen said, “but I’m a firm believer everything happens for a reason. I try not to be one of those people who is, ‘Woe is me.’ The older I get, the less I like to think about (what might have been).”

Queen is smart in that respect. He has no regrets, and he focuses on the future.

Now that he’s a coach, the 24-year-old said the best thing about being back in his second home — Emory Sewell Stadium — is that he gets to pass on all the information he’s learned from the time he was sitting in his father’s film sessions when he was 6 or 7 years old, to through his college career.

“I like being able to help the young kids,” Queen said.

He’s also young enough to be able to show the kids how it’s done. Queen said he hasn’t done it yet, but he gets some good-natured ribbing from Singleton, the team’s receivers, defensive backs and others.

“They either think they can cover me or pick me off,” Queen said. “It’s all light-hearted.”

In the next sentence, it seemed like Queen has been close to taking them up on the challenge once or twice.

What many of the players on the roster may not know about their new assistant coach is he was a three-time all-county quarterback, a first-team all-state quarterback and he stands third on the Cobb County all-time lists for career passing yards (8,519) and touchdowns (89).

One person who would likely know what the outcome of those matchups would be is Shane Queen. He’s seen all the athletes come through North Cobb over the last 15 years, and the fact that Tyler is now on the staff has energized him, too.

“It’s been great having him back here,” Shane Queen said. “It makes me excited to see him grow into the position. He’s going to be a good coach for a long time.”

It’s been a treat for both Queens to take the field together, especially during pregame activities when videos of previous seasons can be seen on the scoreboard.

“It’s been awesome,” Tyler Queen said. “Dad and I get caught up with flashbacks with some of the video clips. We get goosebumps remembering those days.”

Now, it’s time for the younger Queen to make more memories. This team appears to have the potential the 2012 team had, and maybe more.

We’ll see as the season plays out. All Queen knows is he’s ready to be part of the new chapters of the Warriors’ long football history.

“I’m lucky,” he said. “I got a job straight out of college, but the biggest thing I wanted was to be at North Cobb. It’s the closest thing I’ll ever get to playing for my dad again.

“I wouldn’t want to do anything else.”