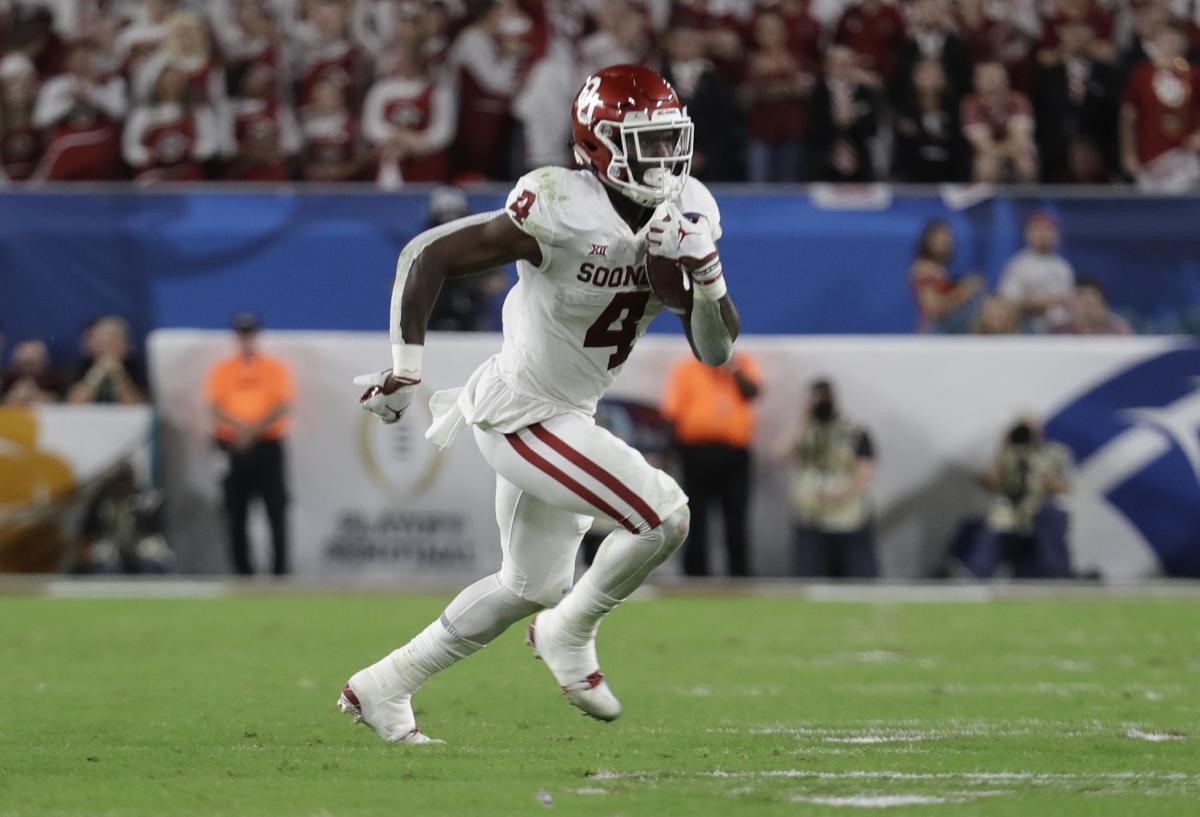 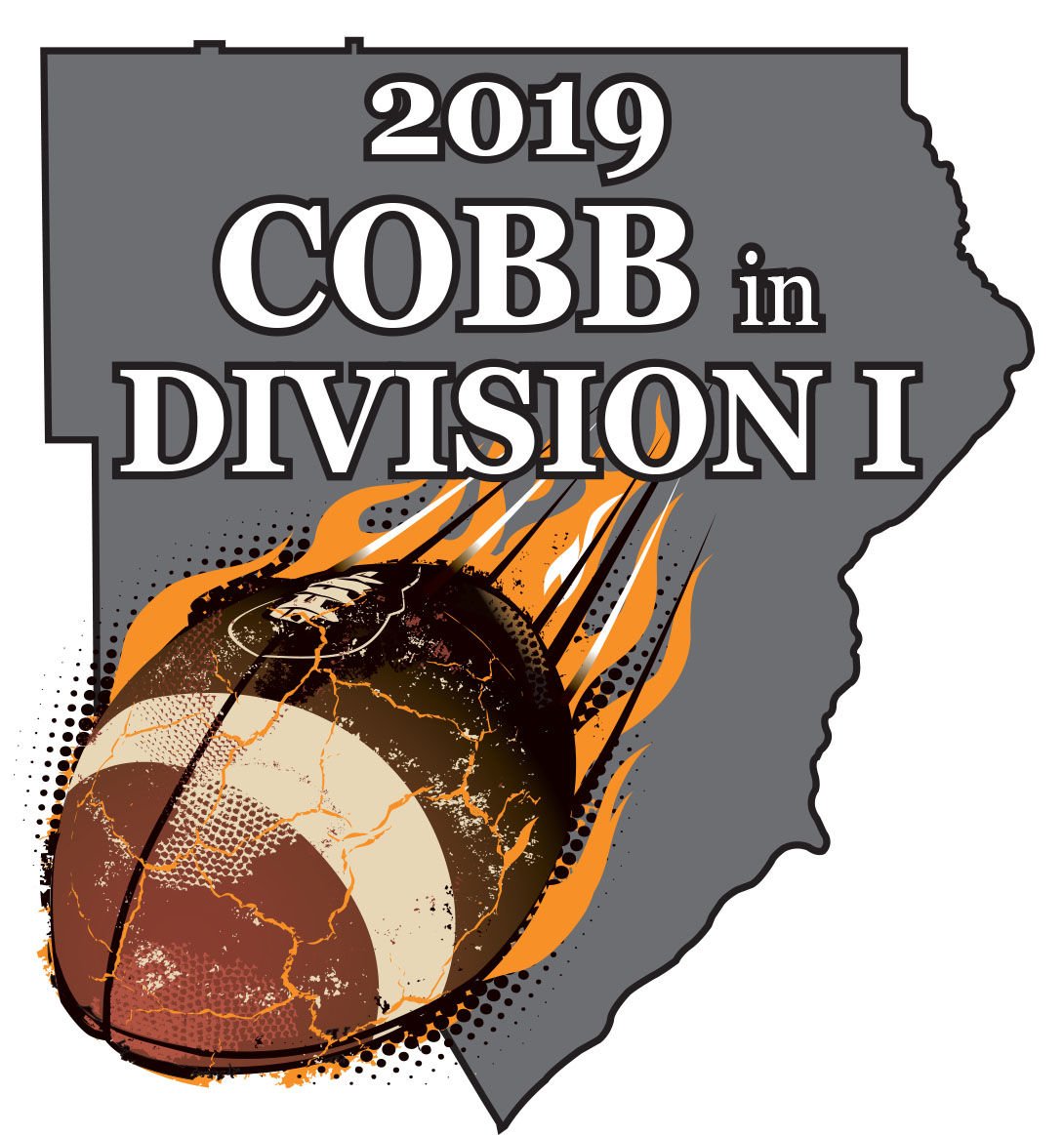 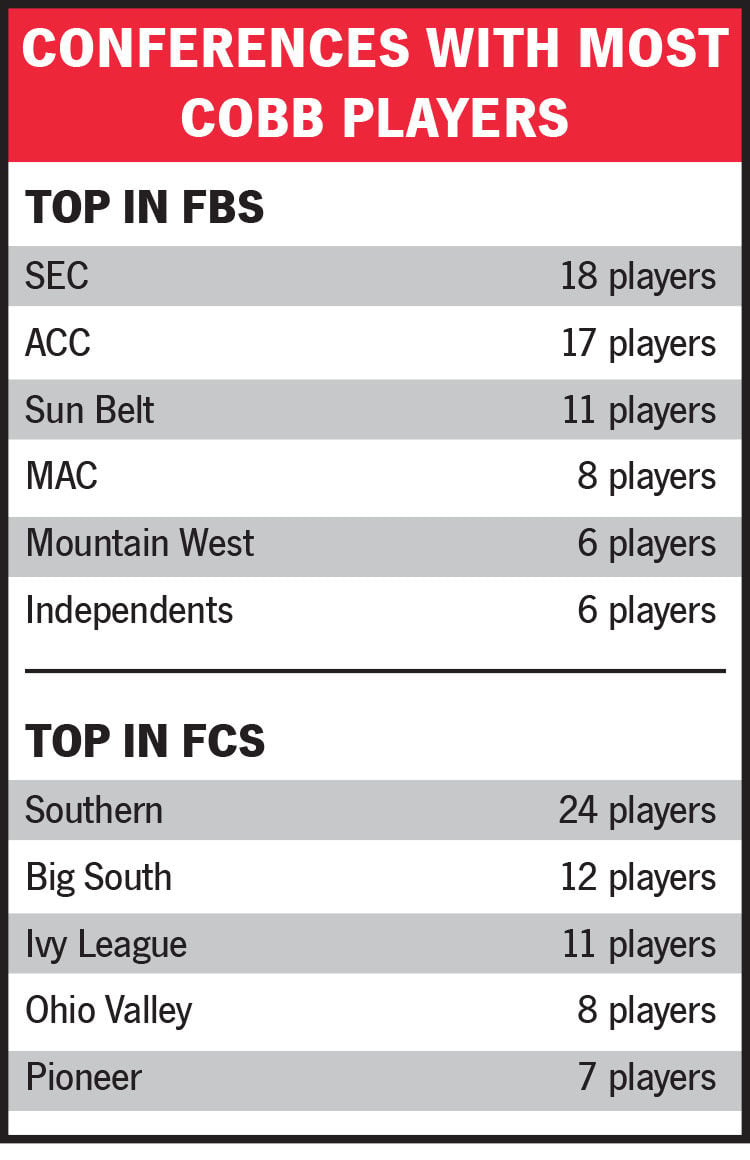 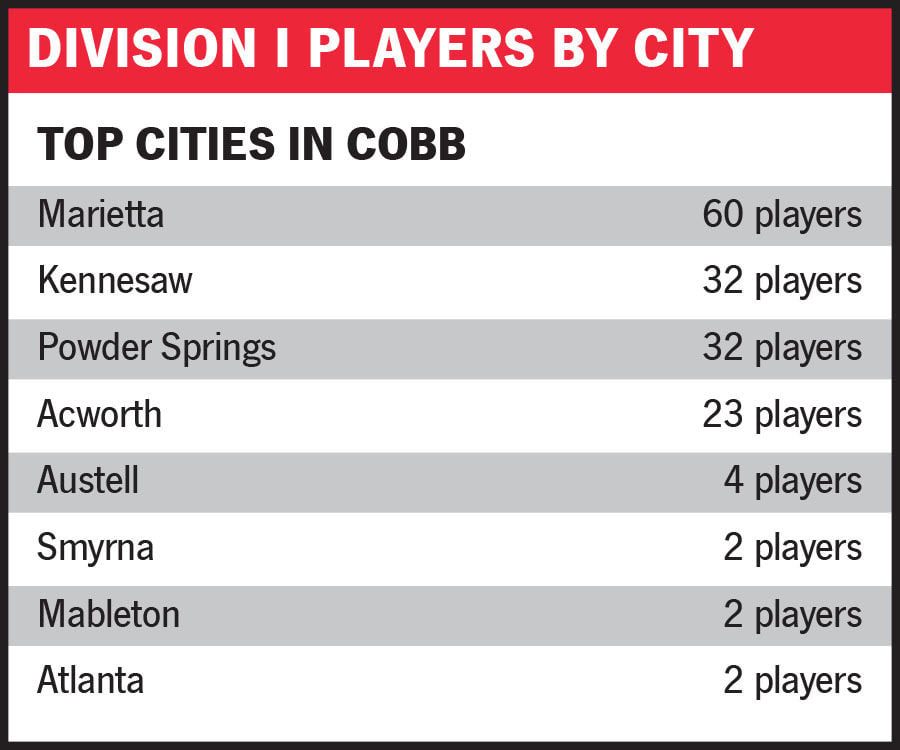 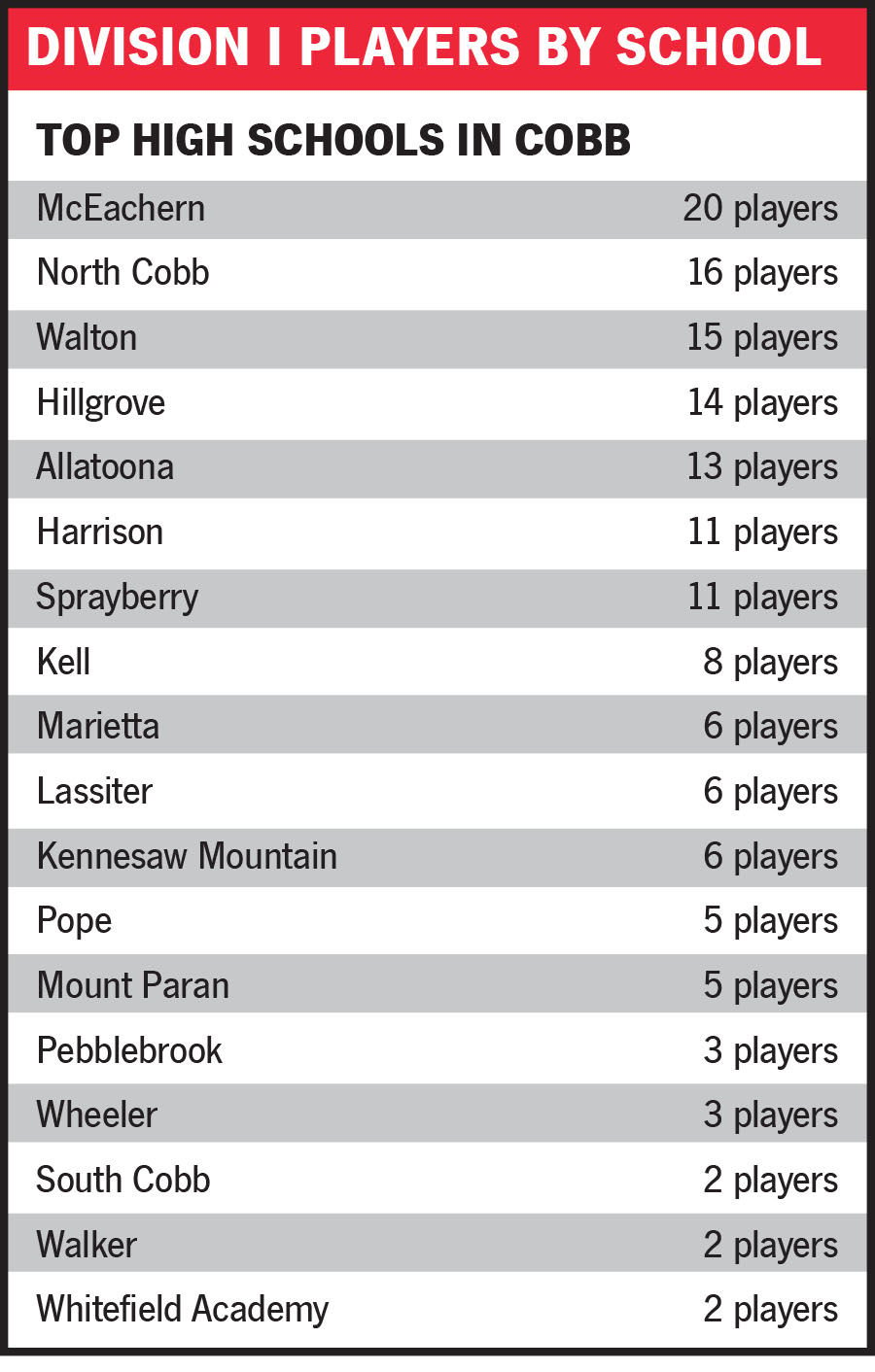 Justin Fields, Trey Sermon, Jabari Zuniga and Bryson Armstrong are just a hand full of the many talented football players from Cobb County that will take the field for college football teams this fall.

With 159 players currently on Division I rosters, there is no doubt that Cobb County has become a factory for college prospects. Because of that, there are more than enough prospects to create an All-Cobb County college football team.

Here is the team the MDJ would put on the field for the 2019 season.

Fields took the large sum of headlines from November to January, without even stepping on the field, as his transfer from Georgia to Ohio State was the worst kept secret in college football.

A former No. 1 overall recruit in the 2018 class, he already has the third best odds to win this year’s Heisman Trophy at 8-1, behind only Clemson’s Trevor Lawrence and Alabama’s Tua Tagovailoa.

In his sophomore year, Sermon led the Big 12 champion Sooners in rushing with 947 yards and found the endzone 13 times.

Simmons has played in 34 games for the Bulldogs, earning 183 yards and two touchdowns through the air, and 131 yards and two scores on the ground.

Windham redshirted during his Junior year after suffering an injury four games into the season. The 6-2, 200-pound receiver has played in 30 games for the Blue Raiders, starting in half of them, and has 529 yards and four touchdowns.

Letton had 25 receptions for 246 yards and a score before redshirting four games into his junior season.

Weaver has started 24 games at left tackle for the Monarchs. The 6-6, 290-pound tackle was named to the Conference USA All-Freshman team and received a 2017 Conference USA honorable mention.

Marshall has played in 32 games for the Mocs, starting in 10 of them. The big 6-2, 360-pound lineman has experience starting at both guard positions for Chattanooga.

Francis is currently a backup for the Runnin’ Bulldogs, but saw action in four games last season. At 6-2, 302-pounds, Francis already has the size to compete for a starting spot.

The 6-6, 304-pound Scott is a six game starter for the Seminoles, and played in 10 games last season.

The 6-4, 257-pound defensive end is one of the top defensive ends in college football and is returning for senior year. In three years at Florida, Zuniga has racked up 104 tackles, including 27 1/2 for a loss, 15 ½ sacks, and he was on the Ted Hendricks Award Watch List in 2018.

Through three seasons, the 6-5, 300-pound Rochester has recorded 89 tackles, seven tackles for a loss and 5 1/2 sacks for one of the country’s top teams in recent years.

After playing in only one game his freshman year, Ponder saw a bump in playing time during his sophomore season, recording nine tackles, a sack, and a forced fumble while playing in eight games.

Albright has experience at both defensive end and outside linebacker, but the junior is best off the edge. He has become a playmaker for the Cardinals, 93 tackles, five forced fumbles, two interceptions and five forced fumbles in two years

Armstrong was the 2017 Jerry Rice National Freshman of the Year, an AFCA FCS Coaches All-America First Team member, and a two-time all-conference player in the Big South.

In two seasons, the 5-11, 212-pound linebacker has 189 tackles, including 22½ for a loss, three forced fumbles, four fumble recoveries, and three picks.

A backup that mostly played on special teams his freshman year, Ogbonna was able to show out his sophomore year recording 72 tackles for the year.

Ojulari was able to gain real in-game experience thanks to the new redshirt rule. He played in three games, recording four tackles and a tackle for a loss. The 6-3, 240-pound Ojulari may not become a starter in 2019, but will see plenty of playing time.

Jacobs finished second in the Sun Belt Conference in interceptions with four, and fifth in the conference in passes defensed with eight.

In two seasons with the Mountaineers, The 6-foot, 192-pound corner has recorded 77 tackles, a pick, eight passes defensed and a forced fumble.

In two seasons playing for the Owls, Walker has 78 tackles, 5 interceptions, a sack, a forced fumble and a fumble recovery.

He has 200 tackles and 3 fumble recoveries in three years.

The 6-3, 215-pound Pierce started as a true freshman for the Gamecocks, and was named specialist of the week for the Ohio Valley Conference on September 9.

Tarver was a talented returner, as well as an eight game starter at defensive back, for Morehead State before transferring to Georgia Southern and taking a redshirt year in 2018. In the 2017 he averaged 23 yards per return for a total of 1,059 yards.

The only true freshman to make the All-Cobb roster, the 6-1, 195-pound Blaylock is projected by Athlon Sports to be Georgia’s starting return specialist. The speedy Blaylock could fill the hole left by skilled returner Mecole Hardman, who is now playing for the Kansas City Chiefs

Cobb in Division I: Cobb County players building big footprint outside the southeast