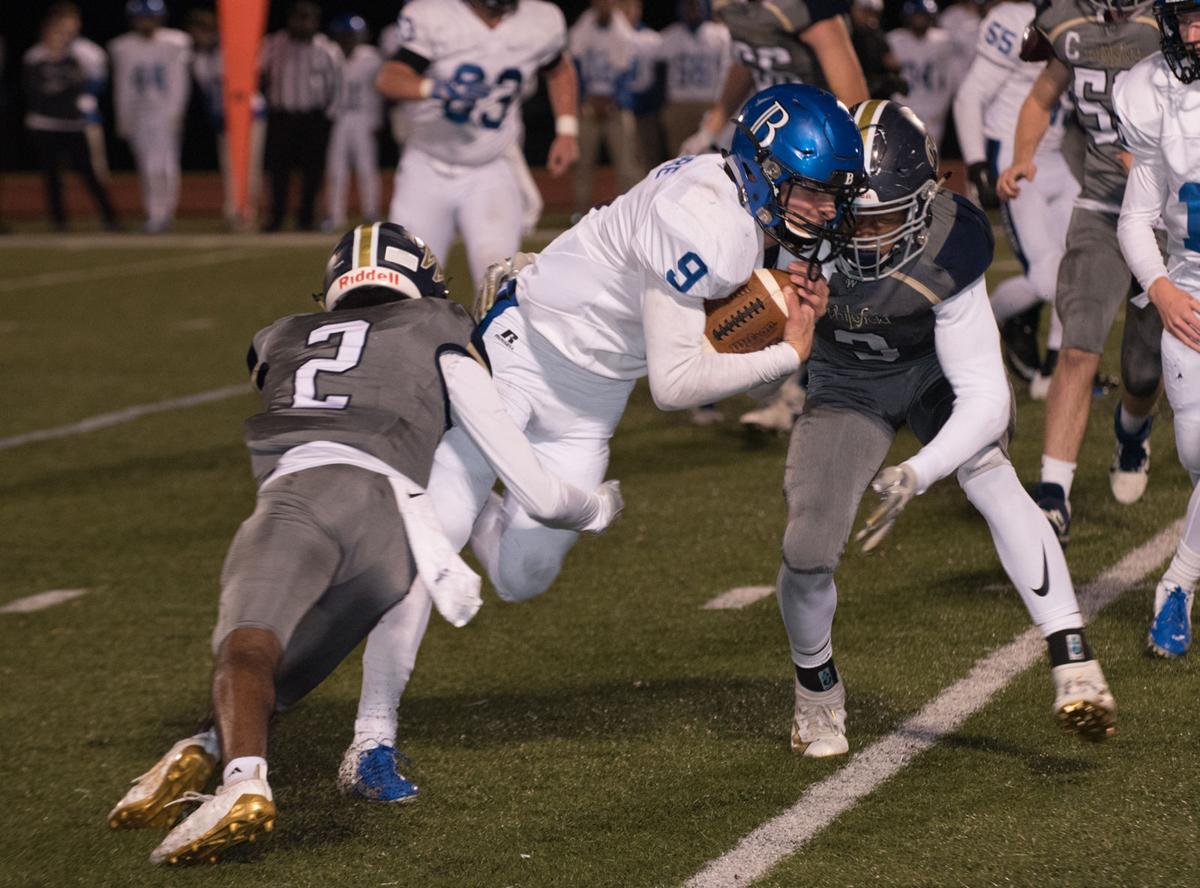 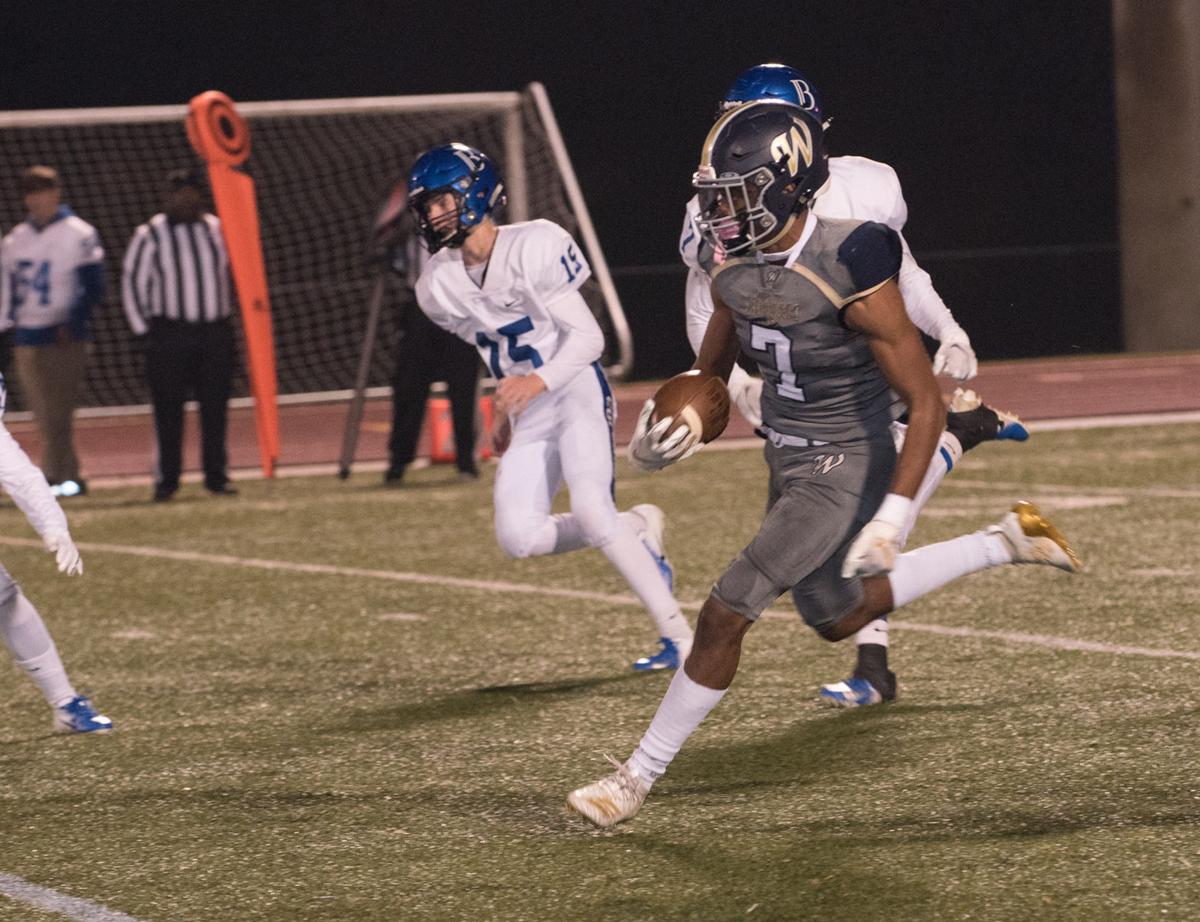 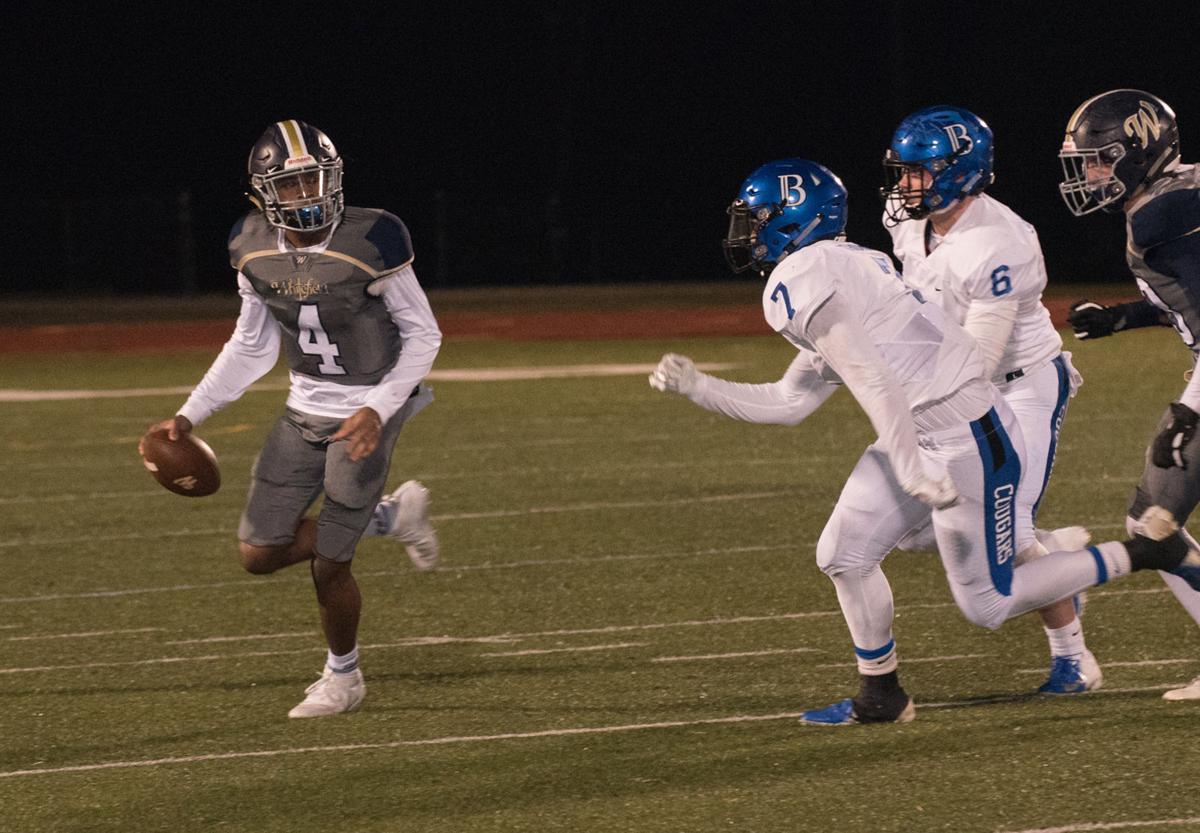 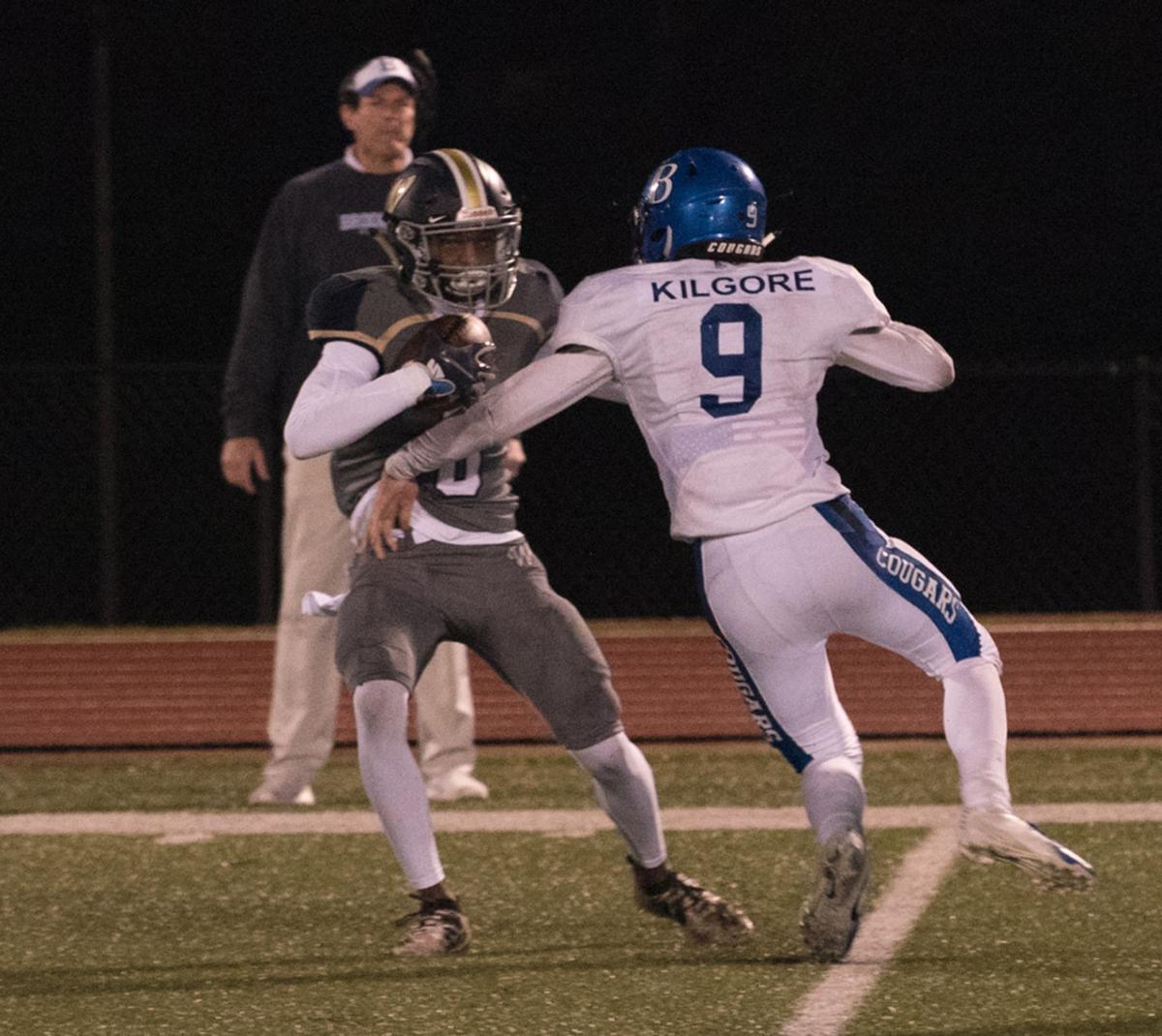 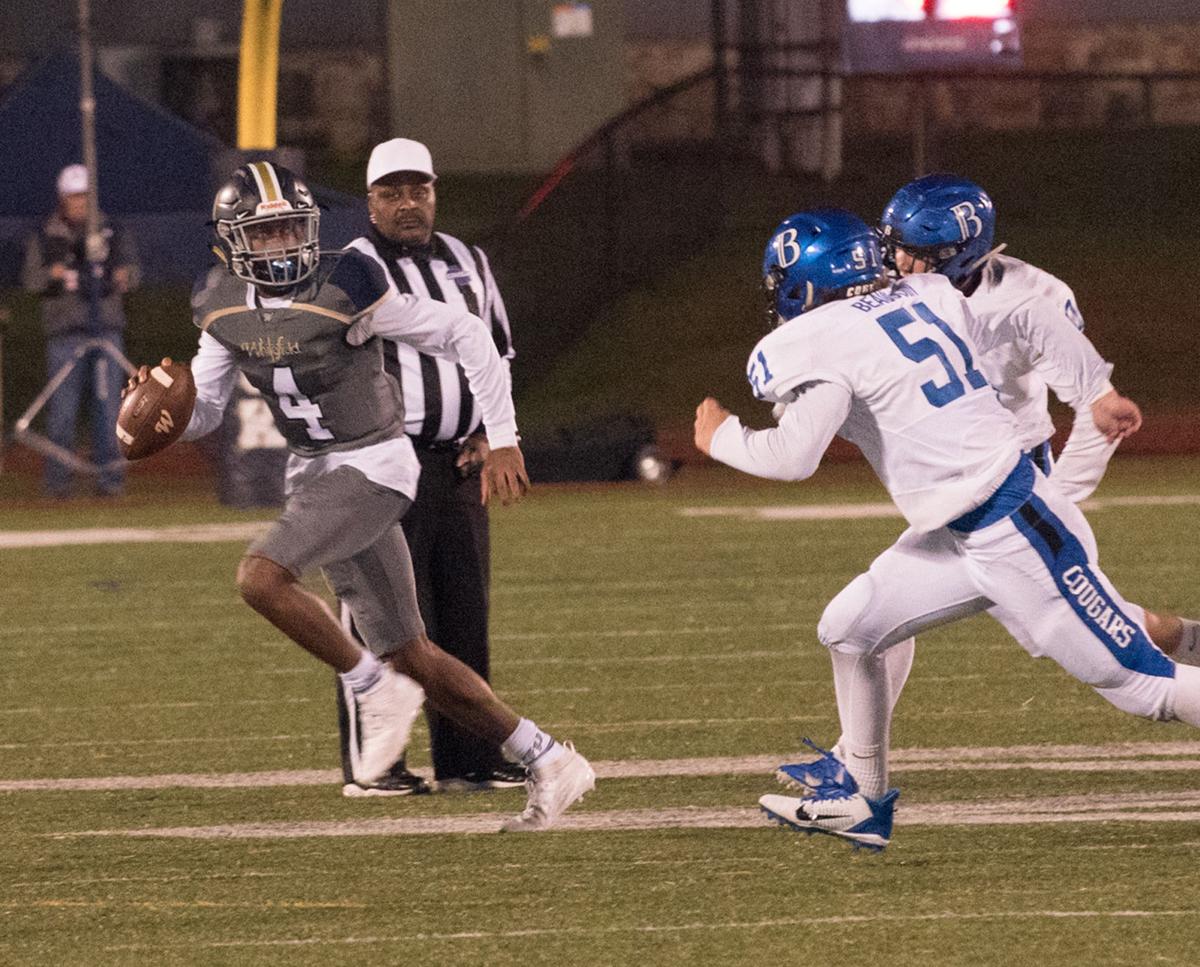 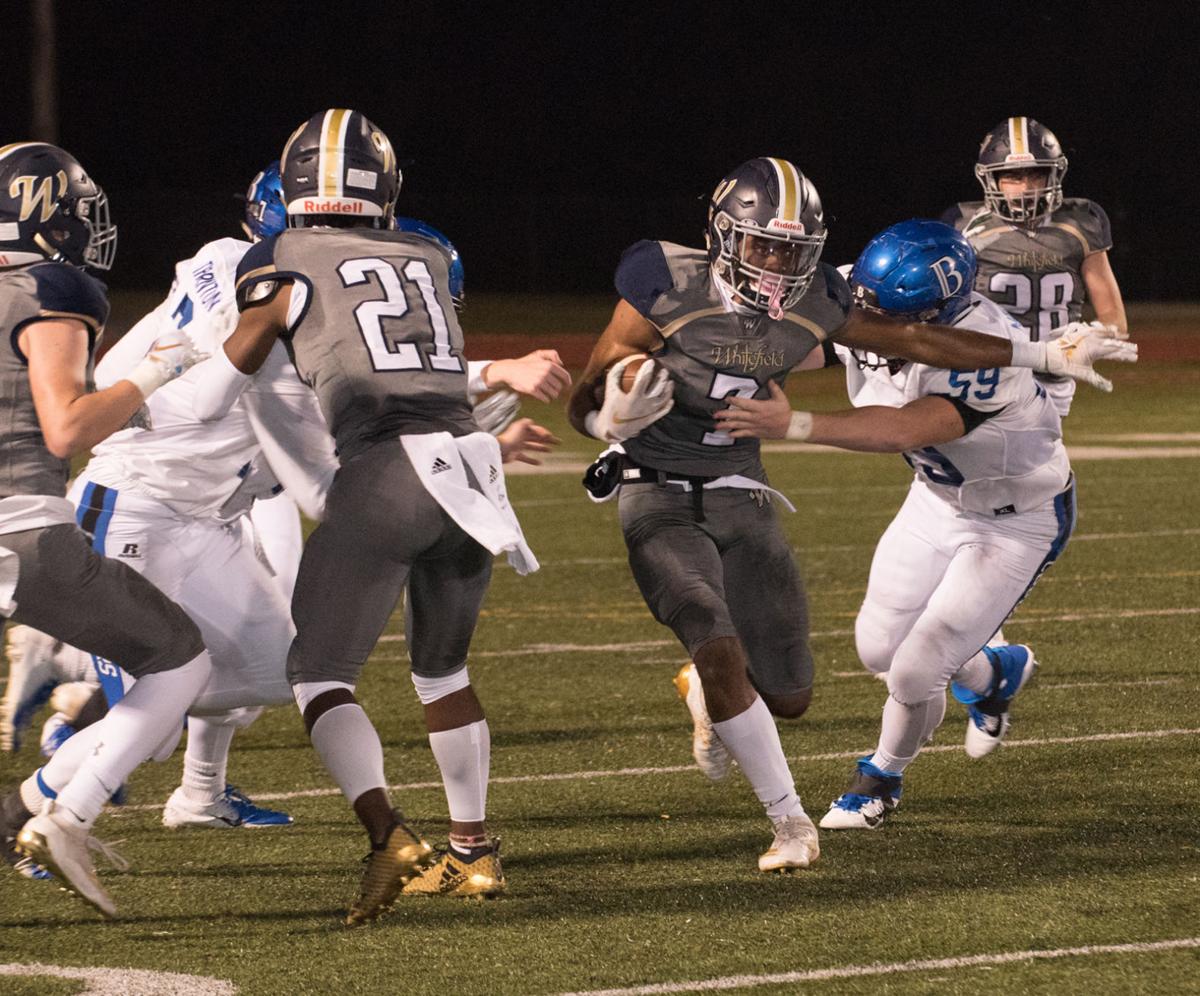 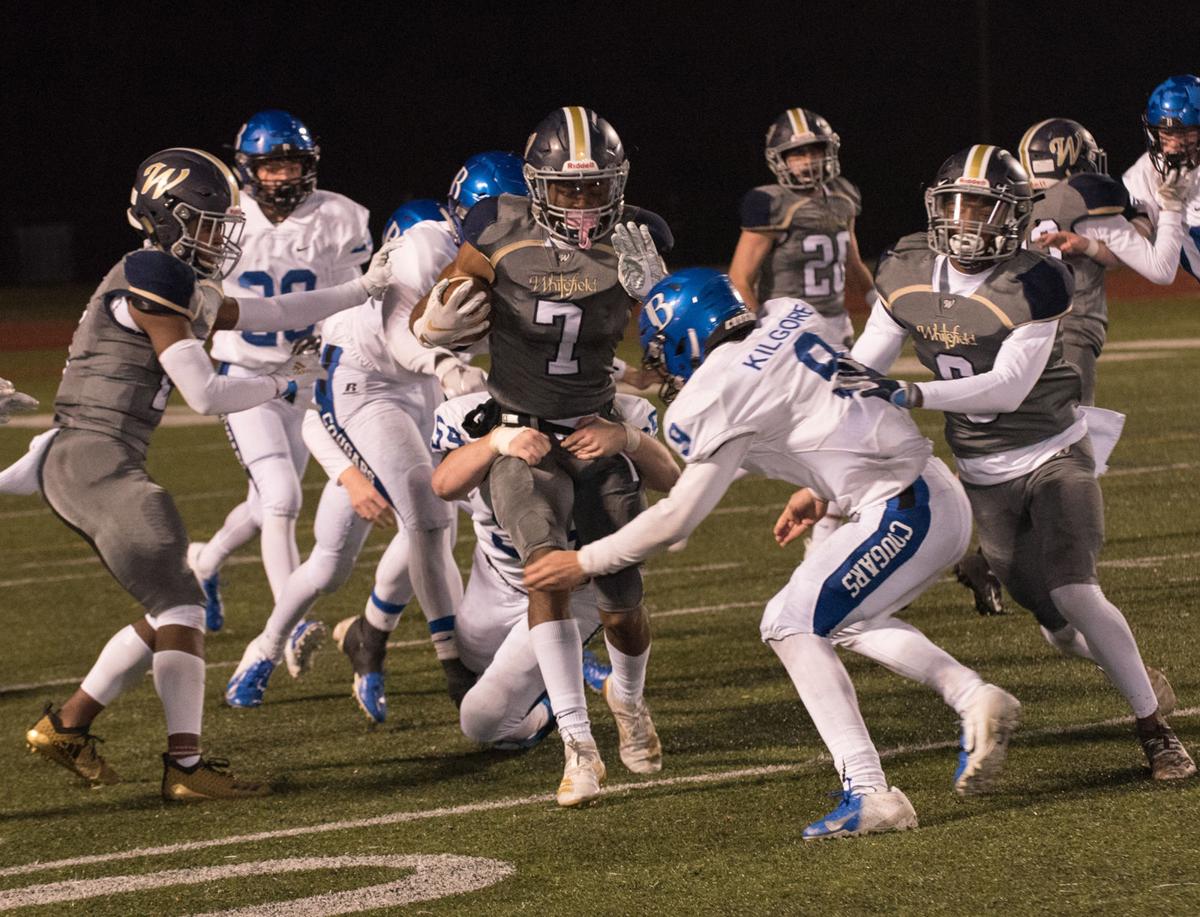 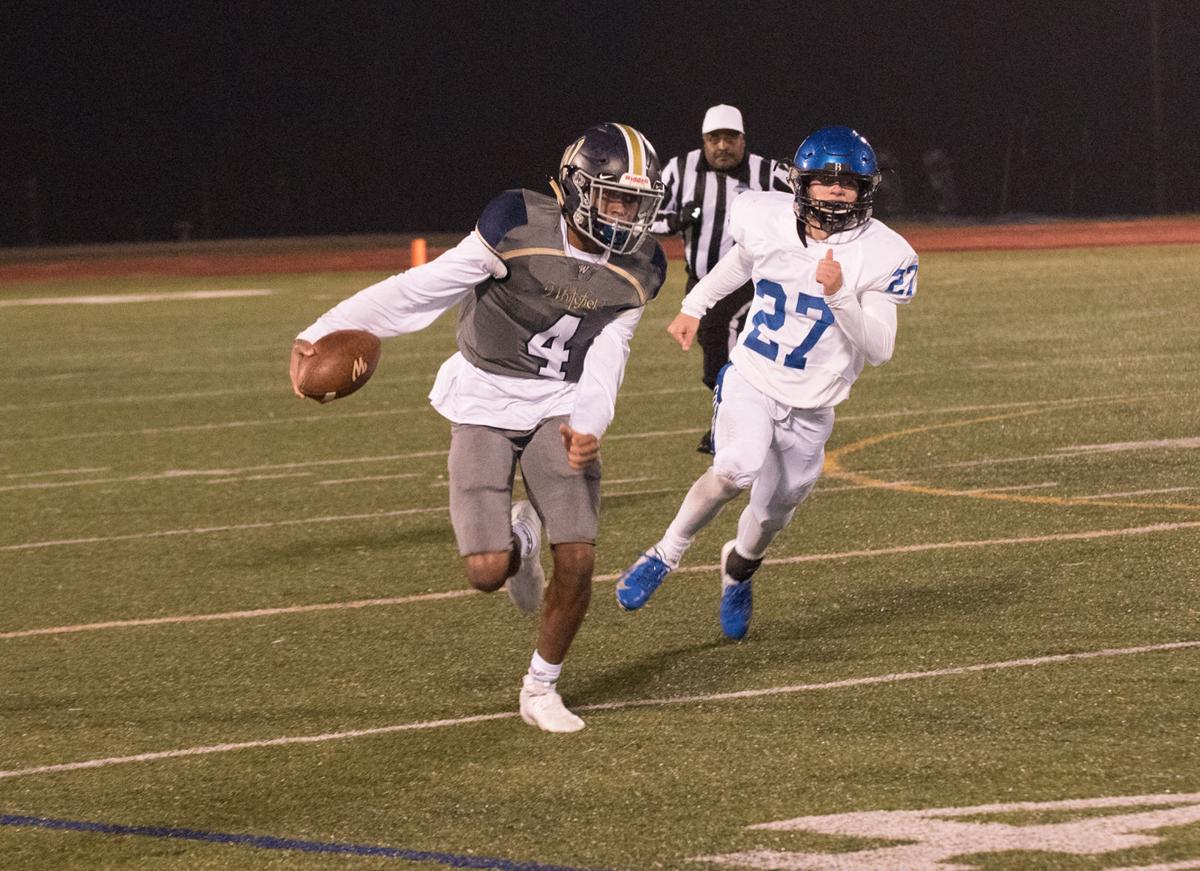 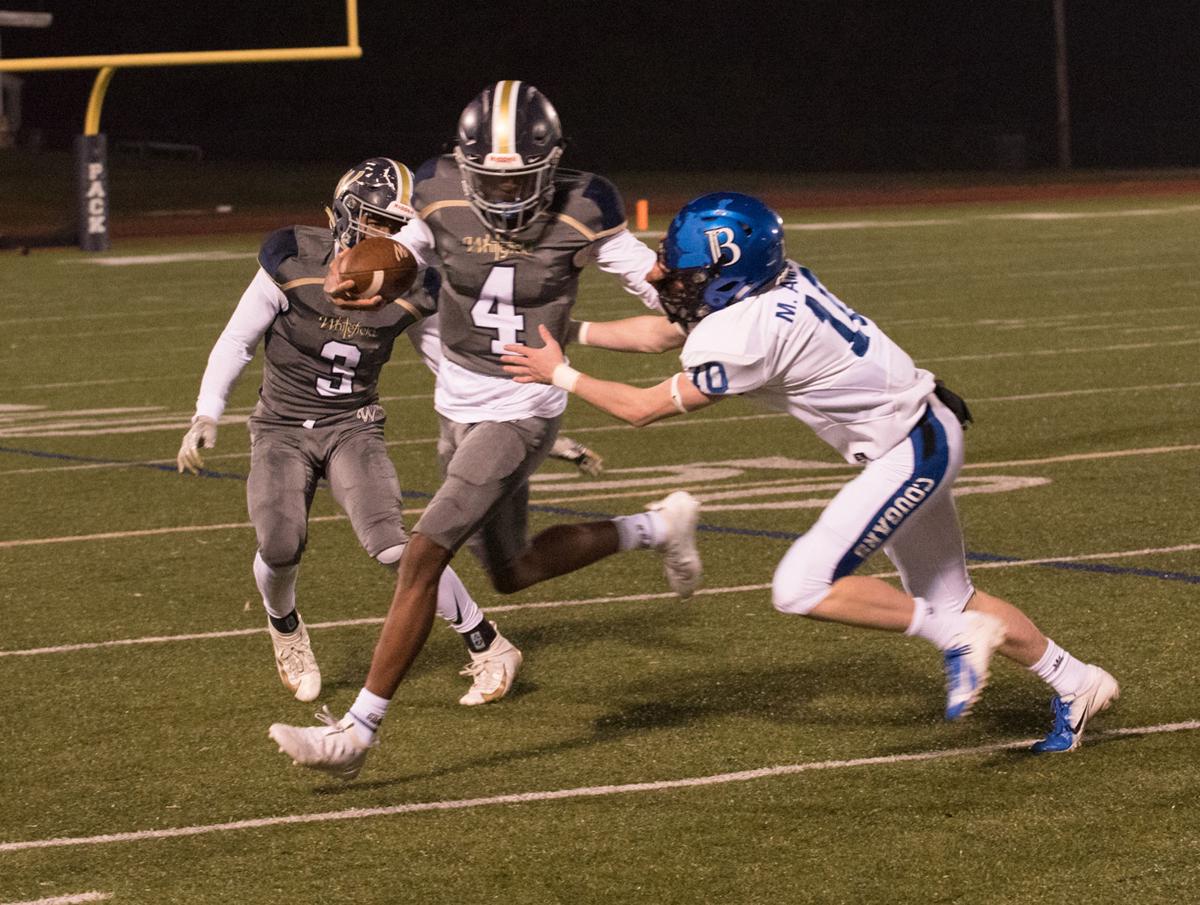 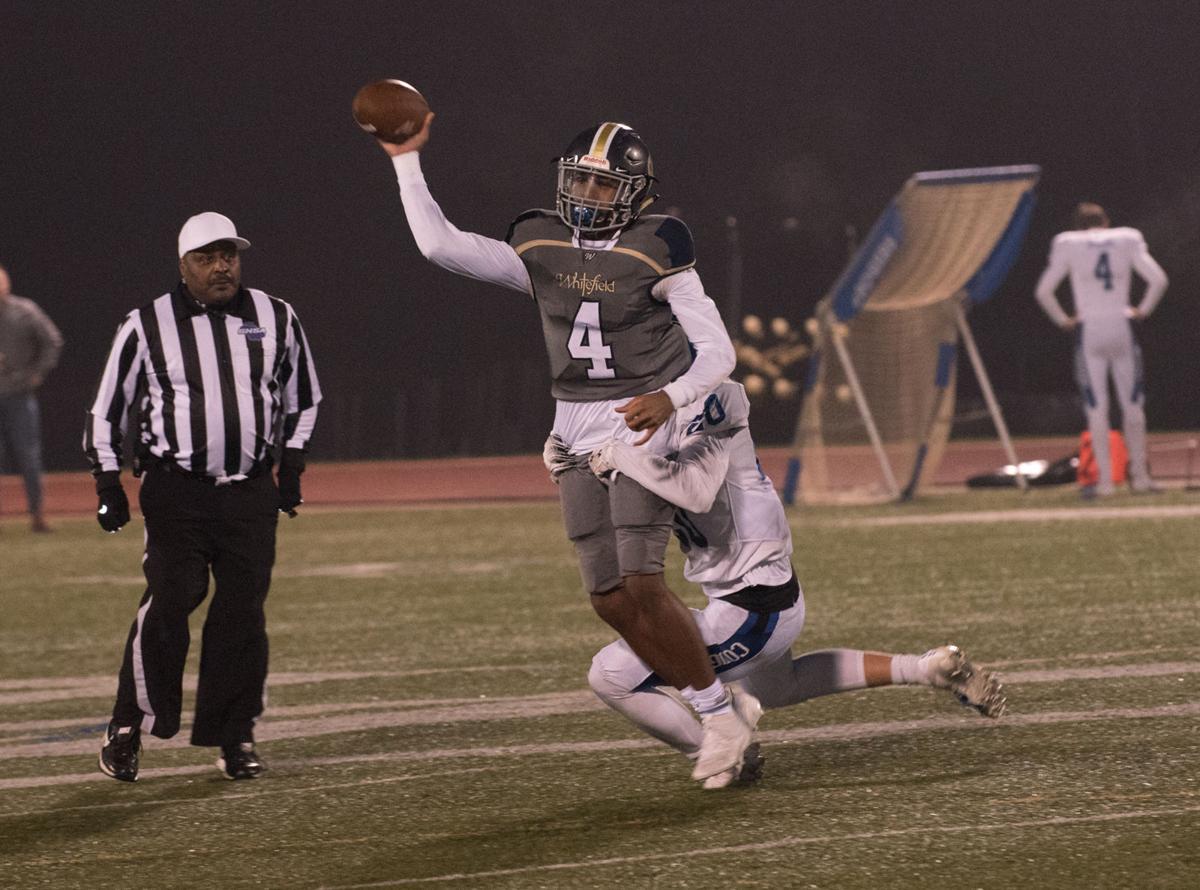 Whitefield Academy quarterback Ayden Duncanson tries to get a pass off before getting tackled against Brookstone. 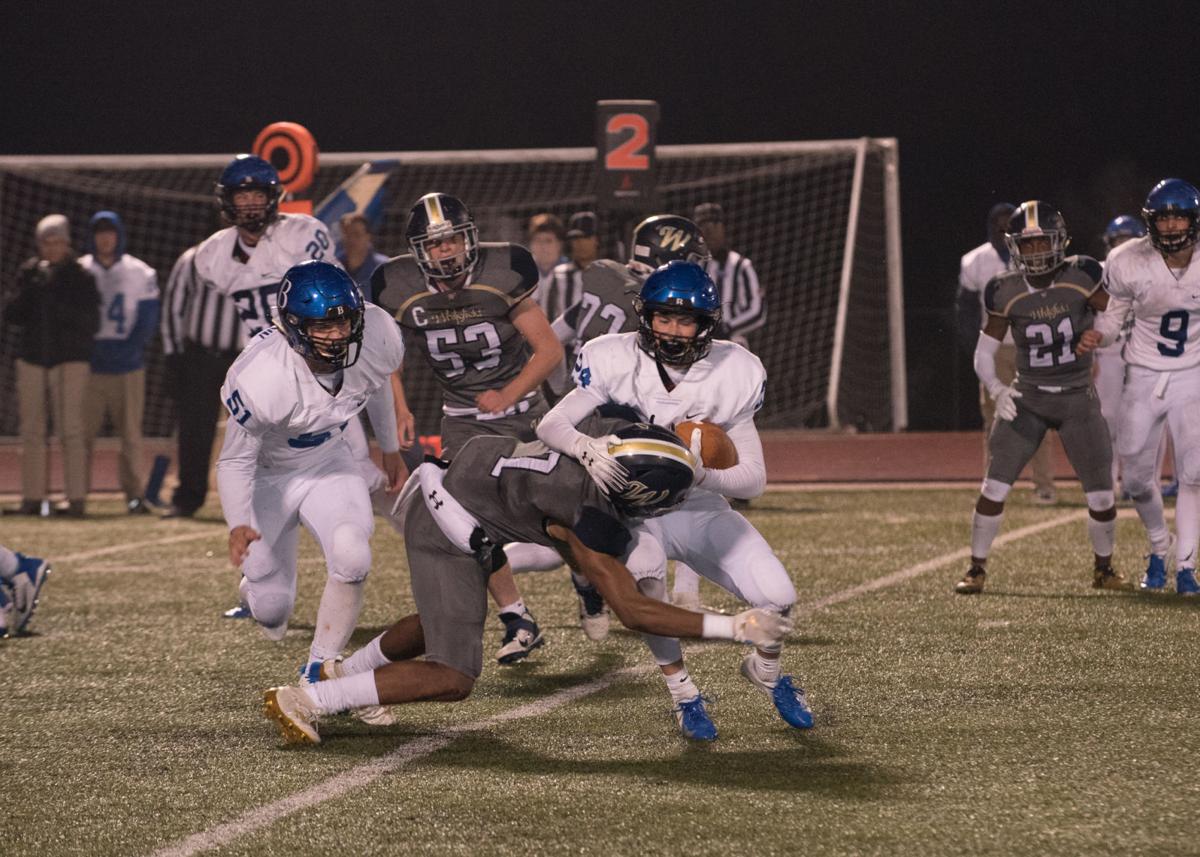 Whitefield Academy quarterback Ayden Duncanson tries to get a pass off before getting tackled against Brookstone.

MABLETON — Whitefield Academy’s season ended in heartbreaking fashion, losing to Brookstone 10-7 in the first round of the Class A private-school state playoffs on Friday.

After turning the ball over three times and significantly losing the time of possession battle, Whitefield still found itself with a chance to steal with game with just under 2 minutes to play. The defense stopped Brookstone’s Sam Kilgore, who rushed for 128 yards on 38 carries, on fourth-and-2 from the Wolfpack 28-yard line.

Starting on their own 31, Whitefield advanced as far the Cougars’ 14 with under a minute with a great opportunity to tie or win the game. However, the drive stalled. Ayden Duncanson found Bryce Davis wide open in the middle of the end zone but the ball bounced off his hands. Duncanson scrambled out of bounds on the next play to set up the game tying 34-yard field goal attempt, but it went wide right.

“You got to have the football to score points and we just weren’t table to kind neutralize that time of possession and those turnovers killed some drives that we felt like we might can move the ball and score,” Whitefield coach Coleman Joiner said. “Anytime you turn the ball over three times and the other team has the ball that much, its hard to win.

Despite only running one first-quarter play that resulted in a turnover, the Wolfpack still found themselves ahead 7-3 at the end of the first quarter. The Cougars (7-4) went on a 14-play drive until Whitefield rose up inside the 10 and forced an unsuccessful field goal attempt. After a fumble on the Wolfpack’s lone first-quarter play, Brookstone took advantage of the turnover with a 32-yard field goal by Wes Pahl for the first points of the evening.

The Cougars’ lead was short-lived as Davis took the ensuing kickoff 100 yards for a touchdown to give Whitefield the lead.

It appeared the Wolfpack would go into halftime with the lead until quarterback Duncanson got sacked and fumbled the ball away late in the first half, with Brookstone taking over at the Whitefield 9. Four plays later on fourth-and-goal from the 1, Dylan Thornton appeared to get stopped short, but his second effort got him over the goal line as the Cougars regained the lead on the final play of the first half 10-7.

Still, after reaching the state playoffs for the third consecutive season, Whitefield is heading in the right direction.

“This is just the start of something special here,” Joiner said. “We’re going to miss these seniors, They’ve done a ton of work here in this program but this is the third playoff appearance of many coming soon. This community’s gotten behind us and this program is different because of these players and these coaches and families. Our best days are ahead of us.”