You are the owner of this article.
Edit Article Add New Article
Home
News
Columnists
CEO Profiles
Contact Us
Print Edition
1 of 4 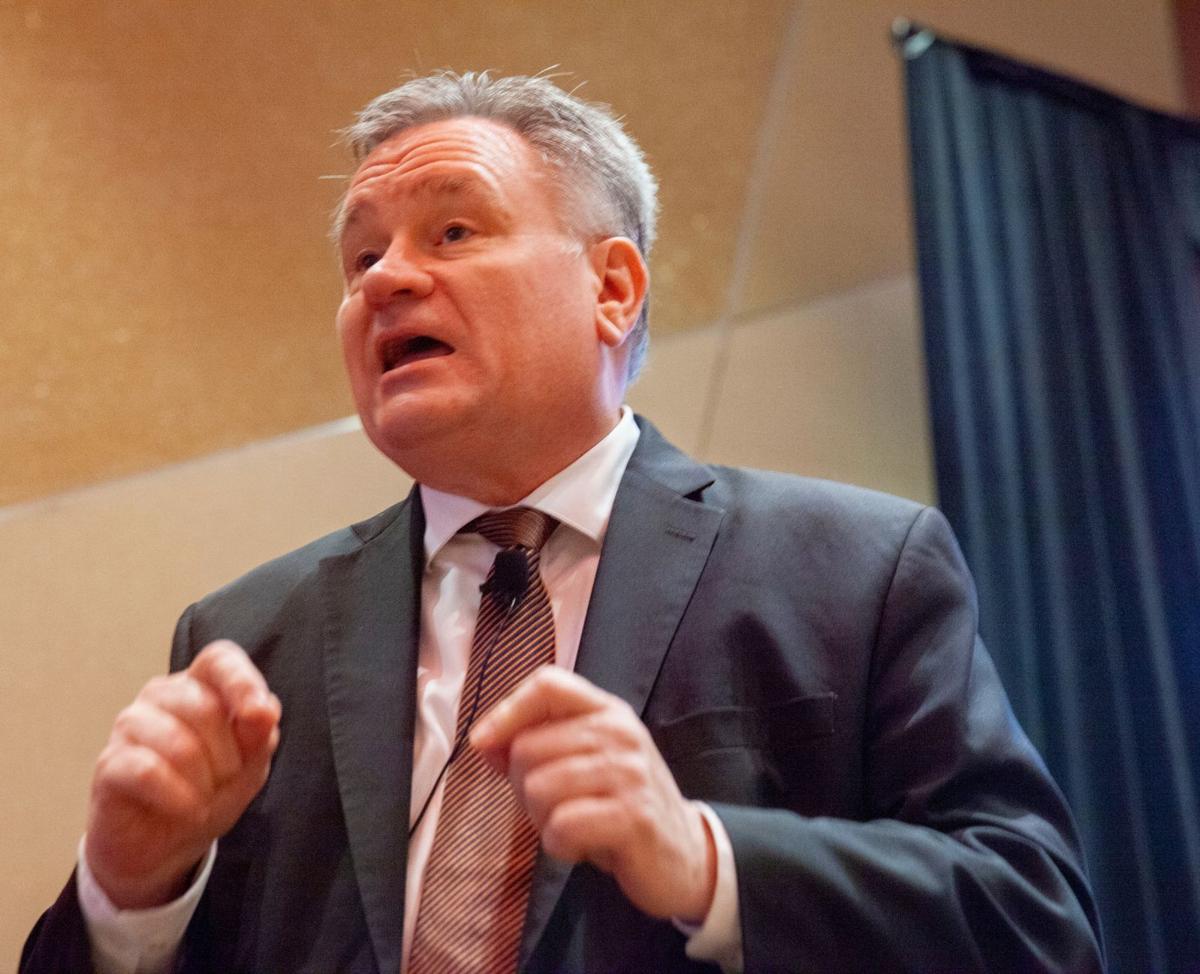 Roger Tutterow, an economics professor at Kennesaw State University and the chairman of the Cobb Pension Board of Trustees, speaks at the annual Economic Forecast breakfast put on by Synovus. 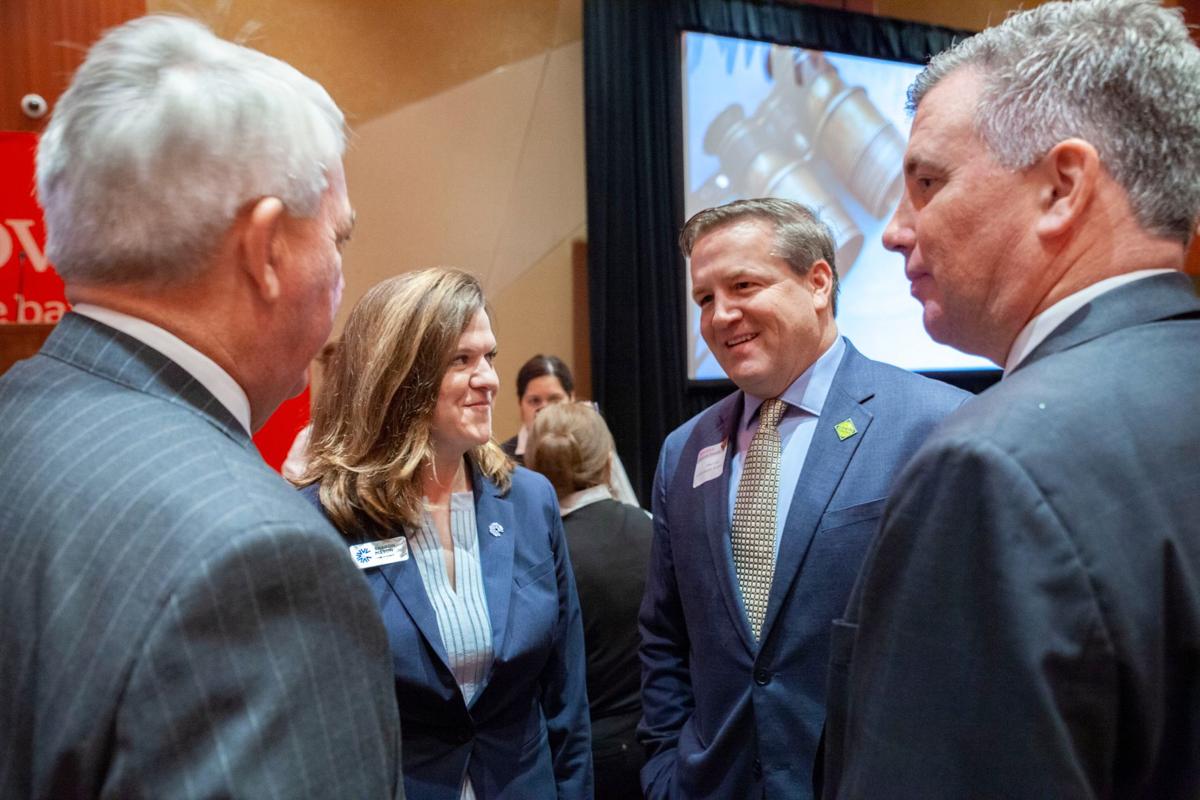 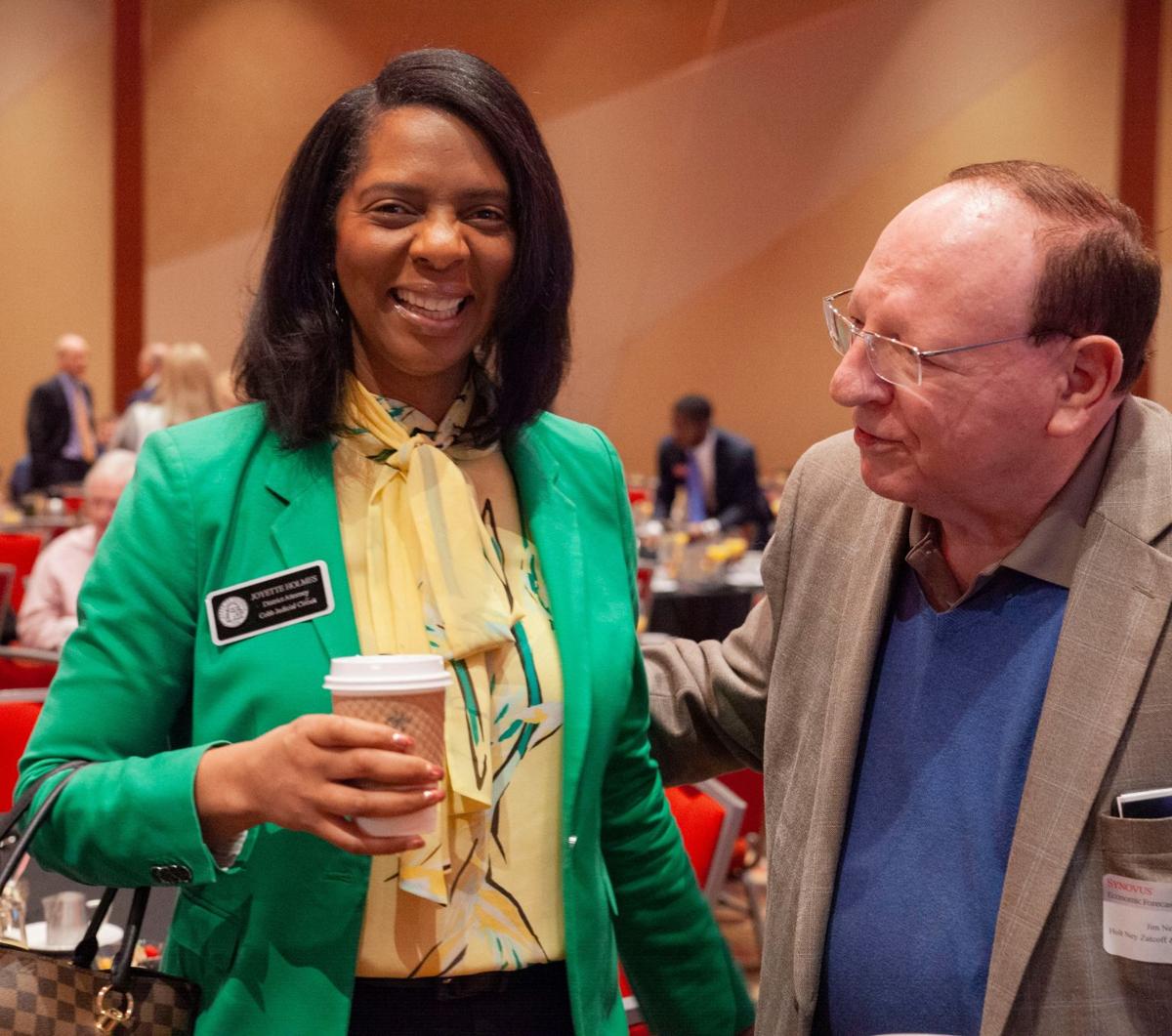 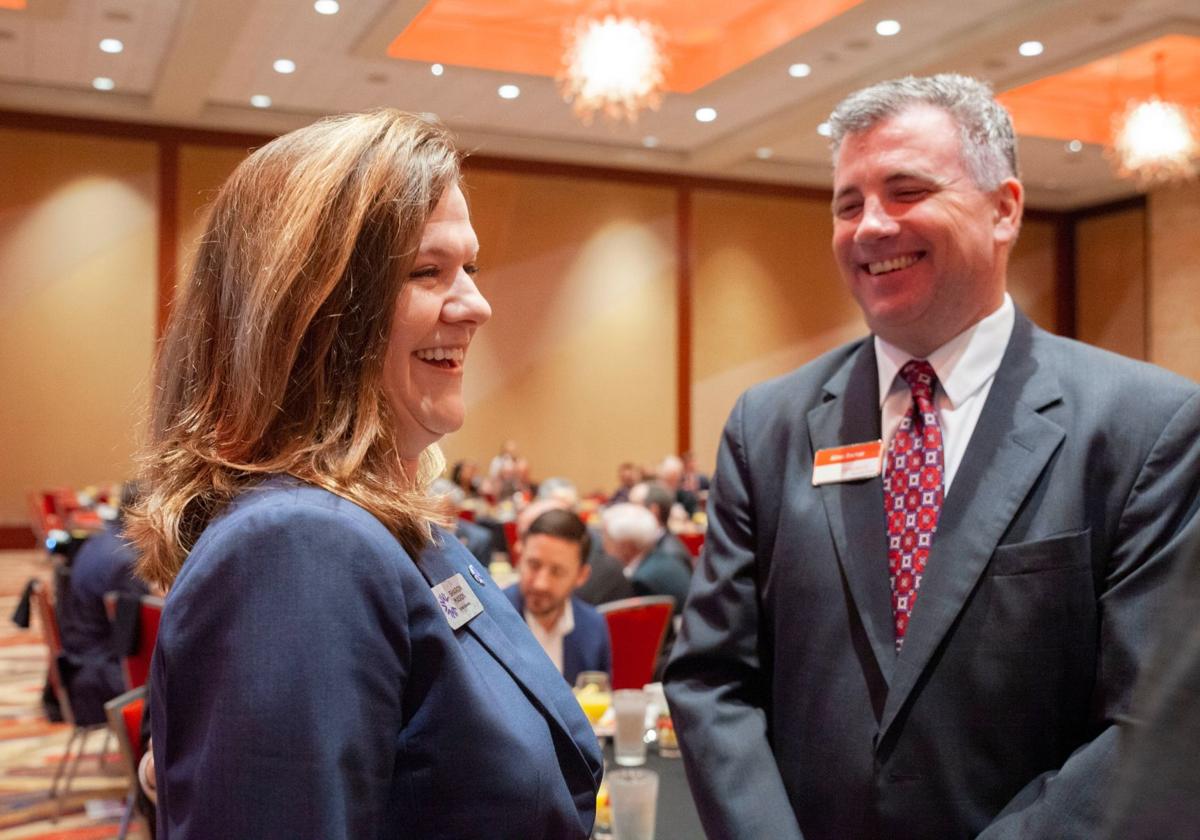 Roger Tutterow, an economics professor at Kennesaw State University and the chairman of the Cobb Pension Board of Trustees, speaks at the annual Economic Forecast breakfast put on by Synovus.

CUMBERLAND — While the Chinese coronavirus will create some volatility in national economies for a while, a recession is unlikely and job growth is expected to remain steady in 2020, according to Kennesaw State University Economics Professor Roger Tutterow.

“The next two to three months will be volatile. There’s no doubt that the coronavirus will disrupt supply chains around the globe,” he said of the virus that originated in China and has so far killed more than 600 people and infected more than 31,000 worldwide.

Tutterow later told the MDJ the question for local economies, like Cobb’s, will be the degree to which that global supply chain will be disrupted, particularly as it relates to the supply chain in China.

He said U.S. travel and hospitality businesses, such as hotels, may see some exposure that could trickle down to the local economy, but as of now, the coronavirus simply adds another element of uncertainty.

So far, the apparent impact on local economies has been minimal, Tutterow said.

Recession could be even less likely this year

Tutterow told the Cobb elected officials, residents, business owners and bankers in the crowd that he believes another recession-free year is in store, following questions in 2019 of whether one would come that year.

“We’re now in the longest (economic) expansion of the post-WWII era,” Tutterow said. “The Great Recession, which at that time was the deepest recession since the 1930s, ended in June of 2009, so we’re now in the 128th month of this economic expansion.”

The economic expert followed that comment by saying there is an “ill-advised tendency” to assume there must be a recession on the horizon after any period of expansion over a decade.

“Recessions don’t begin and expansions don’t die because of old age,” he said, using the analogy of flipping a coin to explain. “You can flip this silver dollar, and what’s the odds of getting heads on a single flip? One half. What if I flip it 11 times in a row? What’s the chances of getting 11 consecutive heads? Less than one chance in 2,000. But if I flip it 10 times and get 10 heads, what’s the chance of getting heads on the eleventh flip? Still 50%. The fact that you had ... 10 consecutive years of economic growth does not necessarily raise the odds of a recession in 2020.”

Tutterow said in 2019, experts projected a chance of recession at 1 in 3. At the beginning of this year, he said that projection was the same, but unless the coronavirus becomes a “broader pandemic” than is expected or the “swords of trade wars (come) rattling again,” the risk of recession in 2020 may actually be lower at one chance in four.

One chance in four is still an elevated risk of recession, according to Tutterow, but he said his projections are that GDP will grow by 1.9% in 2020. Last year’s projections were for 2.1% growth, and GDP grew by about 2.3% instead, he said.

Tutterow also said he’s keeping an eye on something he called “a little bit more sobering”: The Conference Board’s Leading Economic Index, a monthly index that captures data including building permits, stock prices, capital goods and credit conditions, among others.

“We have not had a recession in the post-WWII era not predated by the LEI going negative, and typically negative by more than half a percent before the recession begins,” he said. “In 2019, the monthly changes in the LEI went from being positive to flat to some months below zero. Regretfully, I will tell you that today, the six-month average for the leading indicators is down about four-tenths of a point.”

He said when more data is released in two weeks’ time, it will be important to observe whether the six-month moving average drops below a negative half-percent or not.

“If it does, it does signal increased risk of recession, but does not mean that it is a done deal by any metric,” Tutterow said, adding that if a recession does come soon, it’ll be known as the recession that the nation talked itself into.

He added that consumer confidence is at the highest level seen in the current expansion. That, he said, shows the morale of “a Main Street America, which in January and February of 2020 does not see a recession as an imminent outcome.”

Job growth and tight labor marketsA report from the U.S. Bureau of Labor Statistics released Friday morning shows the country added 225,000 jobs in January, eclipsing the average 185,000 per month added in 2019 and aligning with a prediction Tutterow had made the day prior.

The national unemployment rate remains little changed at 3.6%, according to the report, and Tutterow said the metro Atlanta area’s rate sits “well below” 4%.

He said the addition of jobs nationwide and in local economies is likely to continue in 2020 and while positive, has created challenges, namely a tight labor market.

“I am confident that if I went around the room today and surveyed the three largest concerns you have about your own business, access to tight labor markets would be No. 1 or No. 2,” he told the Cobb crowd. “When you add jobs faster than the labor force grows, the labor markets get tight, and it’s tight in every sector of the economy.”

In the metro Atlanta area, Tutterow estimated that 2020 will bring about 51,000 new jobs. Job creation in Cobb County, where he said about 422,000 of the more than 750,000 residents are already employed, is expected to expand faster than average in the metro area.

A possible solution to the current worker shortage, Tutterow said, will be to address the dwindling participation of younger workers in the labor force. That dwindling has led to a decrease from 66% of adults in the labor pool before the Great Recession to 63% today.

Tutterow said if young workers can be encouraged to reenter the labor pool at levels that return to historic norms, “that will go a long way toward addressing labor shortages nationwide and here in Cobb County.”

That last part is what John Loud, Cobb Chamber of Commerce chairman, said stood out most to him about Tutterow’s presentation.

Loud said the country’s “soaring” student debt stuck out as an issue contributing to the youngest Americans’ lack of participation in the workforce. He said workforce development and a focus on providing options to students, like what Cobb County and Marietta schools are creating with their career academies could provide a solution at the county level.

“We don’t want to have every little Johnny and Sally feeling that they have to go to school and end up with this college debt that they cannot overcome,” he said. “I think higher education is awesome but ... something has got to start to ... bring that debt down.”

Loud also said, though GDP growth isn’t expected to be as robust this year as in years prior, the forecast going forward still looks sunny.

“I was definitely happy to see where consumer confidence was,” he said. “I think it’s still some amazing, wonderful days ahead.”

Other topics of discussion included:

♦ Interest rates are expected to remain low, even after several hikes by the Federal Reserve over the years following the Great Recession. In 2019, the Fed brought short-term rates down to 1.50% to 1.75%. In 2020, Tutterow said the Fed will likely leave rates where they are into 2021.

♦ An increase in the influence of Amazon leading to an increase in abandoned big-box store buildings in communities around the country;

♦ An increase in telecommuting creating lower demand for office space than would be expected in an expanding economy; and

♦ Growing energy independence indicated by and leading to less inflation and gas price spikes in the U.S. following incidents like the September attack on a Saudi Arabian oil refinery and recent engagements with Iran.

Healthy US job market: How big a political edge for Trump?

WASHINGTON (AP) — U.S. hiring jumped last month, and many more people were encouraged to look for work, showing that the economy remains robus…

After nearly three decades on the bench, Cobb Superior Court Judge Lark Ingram will retire when her term ends on Dec. 31.

ACWORTH — In looking to the city’s future, Acworth Mayor Tommy Allegood reminded residents of its past during his State of the City Address on…