MARIETTA — County commissioners slammed the brakes Tuesday on a proposed 73-home neighborhood for seniors on 21.2 acres in northwest Cobb, unanimously stopping a proposed rezoning that had been first discussed late last year. 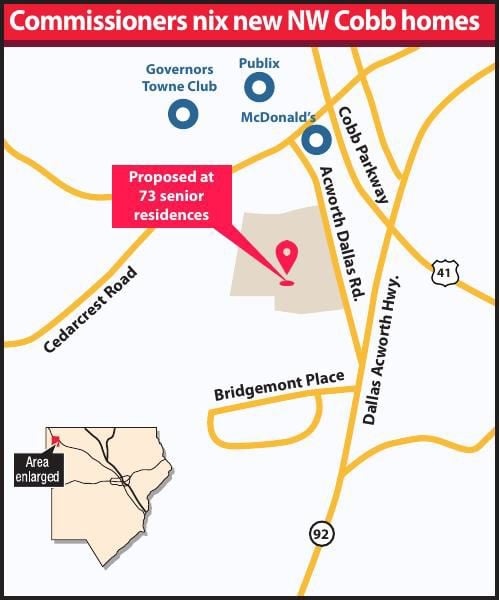 The Wasserman Group’s application for the site on the west side of Acworth Dallas Road and south of Cedarcrest Road was tabled by commissioners last month. The developer had been asked to work with the Cobb Department of Transportation to determine what road features would be needed to allow for the safe flow of traffic out of the neighborhood if built at a density of 2 units an acre, or a maximum of 42 homes.

Attorney Kevin Moore, who represented Wasserman at Tuesday’s meeting, contended that DOT staff members had sought from the developer funds to help construct an interchange at the intersection of Cedarcrest and Acworth Dallas Road. The request came, he said, despite research showing the corridor needed such a traffic improvement even if the neighborhood was not constructed.

A traffic study had been performed on the site, Moore added, when it had been part of a nearly 65-acre property sought to become the site of 248 residences, spread across single units, duplexes, triplexes and quadplexes. When it came before the Cobb Planning Commission in December, the project drew a crowd of about 40 people, 33 of whom were opposed to the rezoning request.

“What came out of it was Cobb DOT informing our traffic engineers on our project that they believed existing traffic conditions — and they stated this, existing traffic conditions — at this intersection would warrant an (interchange) road improvement in their minds, regardless of whether we built our 250-unit community or didn’t,” Moore said. “It was not a result of what we were proposing.”

Wasserman later proposed a 116-unit senior living development on 26 acres, which the Planning Commission denied by a 3-2 vote in March. The denial cited the developer’s request to allow 40 of the units — or about 35 percent — to be available for lease, which is above the 10 percent cap the county imposes on the residential senior living zoning category.

Moore went on to say Tuesday that if the development were to be approved at 73 homes, Wasserman would contribute about half the cost of the new interchange if Cobb DOT wished to construct such an improvement, with the $100,000 contribution being the equivalent cost of a left-hand turn lane that would typically be required as part of the development.

“We cannot do a project successfully, and there is not an economically viable project successful at this location … at 2 units per acre, and to contribute at that point any money or any funds to an offsite traffic or road project that’s needed by Cobb DOT, not as a result of this project,” Moore said.

But Commissioner Keli Gambrill, who oversees the area, proposed denial of the project due to no plans being submitted that reflected a reduced number of homes.

“Direction was given by this board on June 18 specifying that the applicant and DOT discuss what traffic improvements would be required and their associated cost with a 2 unit per acre density under this rezoning request,” Gambrill said. “This was very clear — no new or updated information has been provided to me or this board.”

Gambrill’s fellow commissioners did not continue a discussion after her motion to deny the proposed rezoning, quickly providing their four votes affirming her decision.