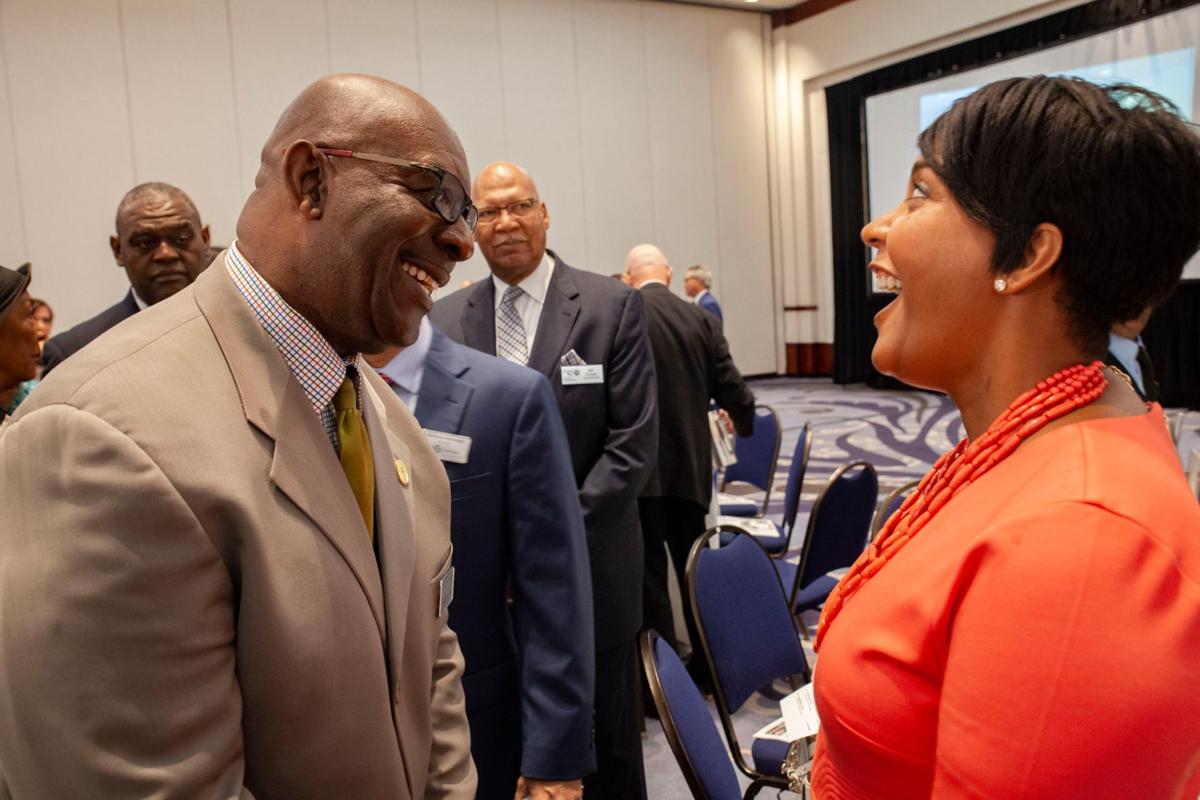 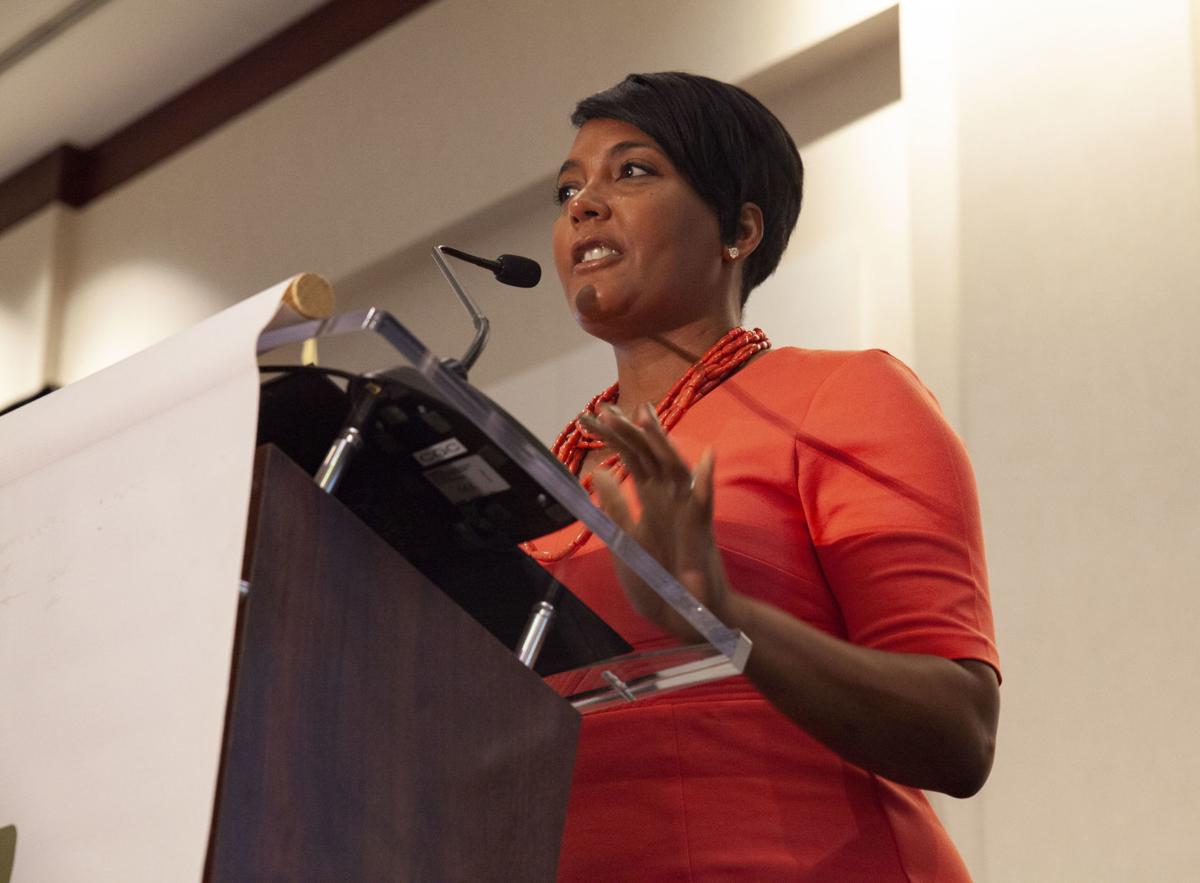 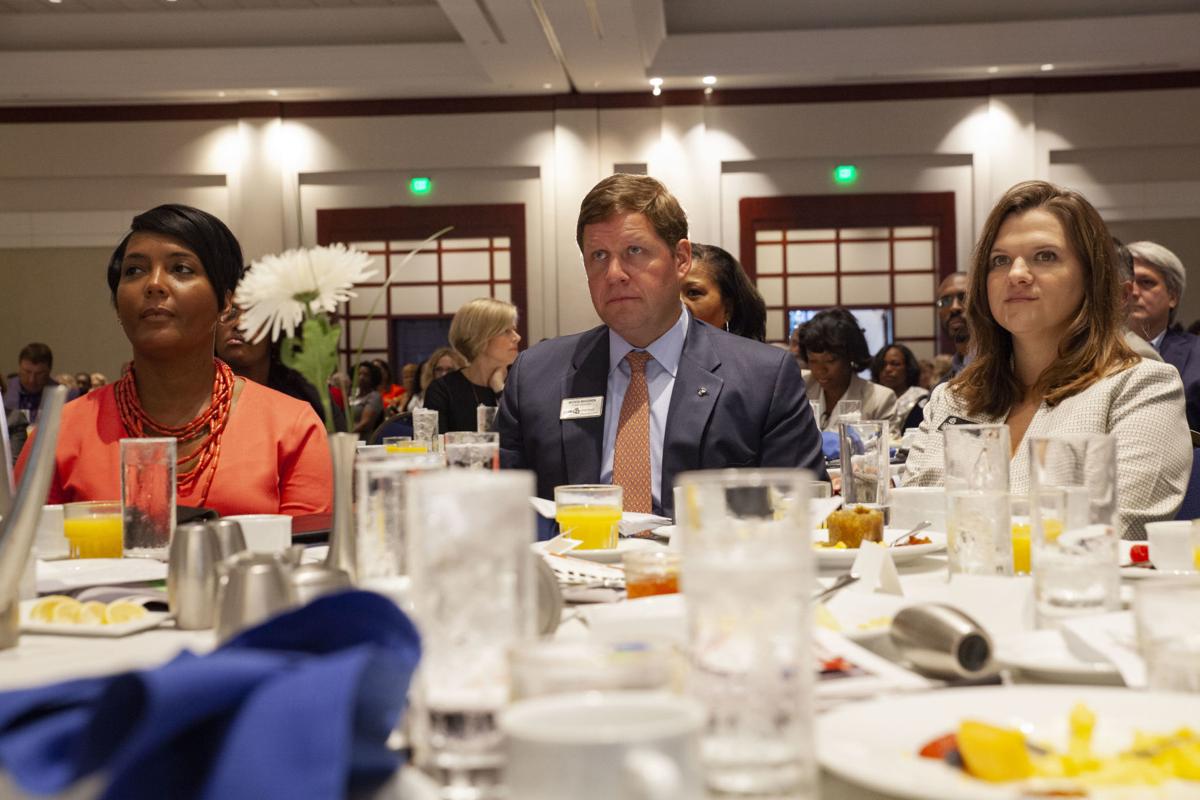 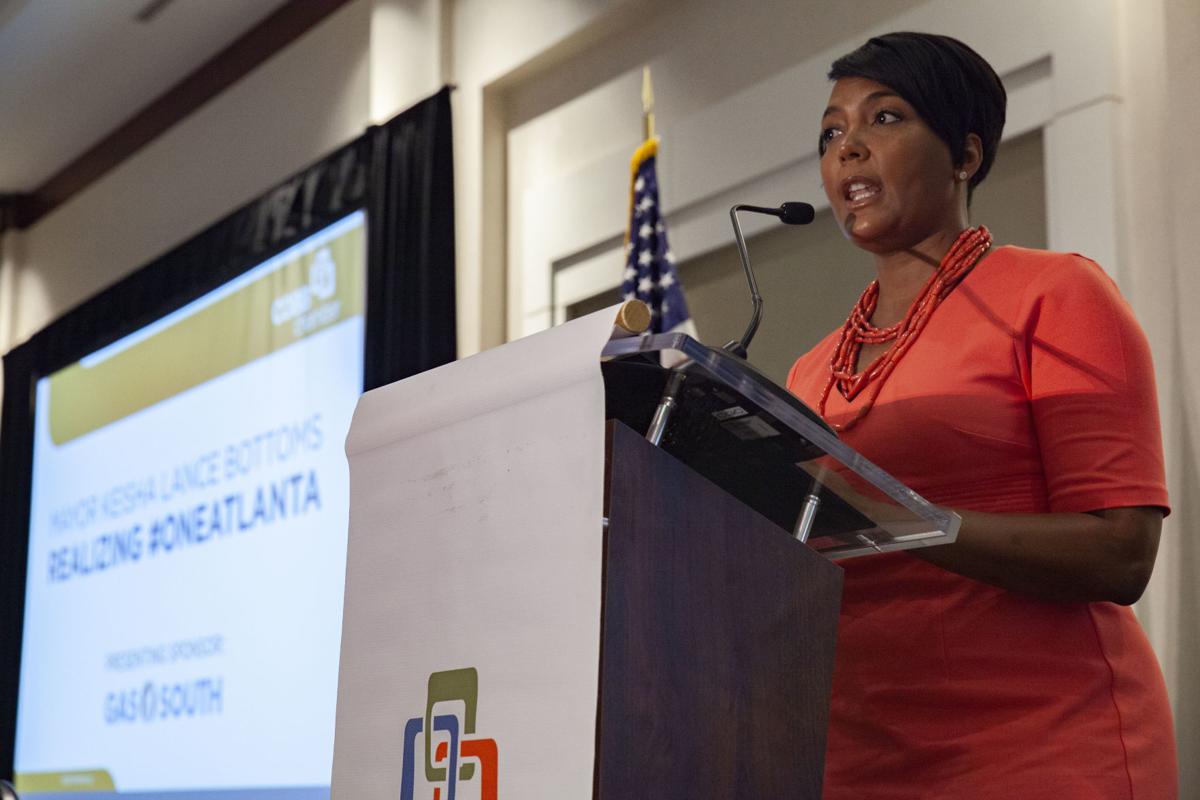 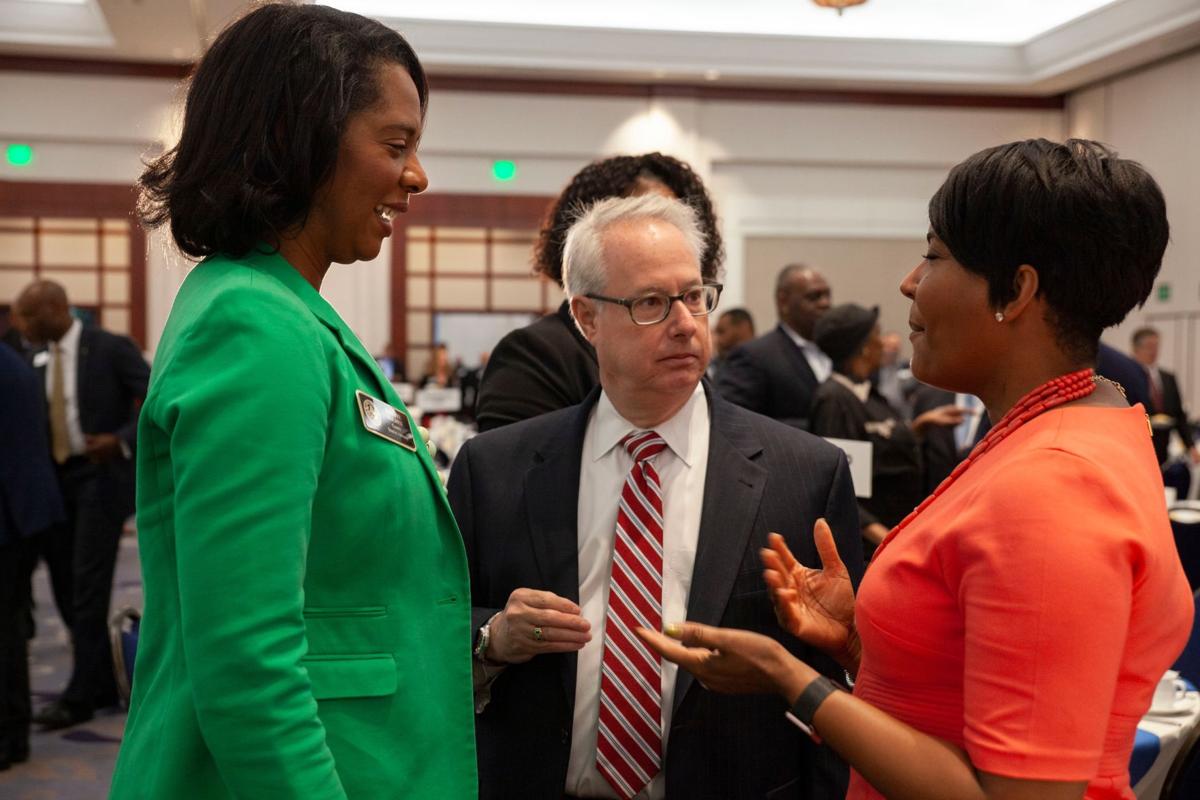 CUMBERLAND — Atlanta Mayor Keisha Lance Bottoms gave the Cobb Chamber of Commerce a broad but succinct update on the state of her city on Monday, addressing the status of transit talks in the region, affordable housing needs and pay raises for police.

The mayor also touched on electric scooter use and the end of an agreement between federal immigration authorities and the city of Atlanta. The end of that agreement late last year meant that the Atlanta City Jail would no longer accept Immigration and Customs Enforcement detainees.

And while sad to see the Atlanta Braves leave the city, Bottoms said she looked forward to partnering with Cobb County for the 2021 Major League Baseball All-Star Game at SunTrust Park.

At the start of her address, Bottoms noted how much Cobb County has grown in the past few decades, saying there was a time when Six Flags Over Georgia was the county’s “biggest thing.” Not so, anymore, she said, seguing to stories about sitting in traffic around the metro area.

Part of the discussion surrounding metro Atlanta transportation, Bottoms said, is how metro counties come together to establish a “truly regional transportation network.”

“Traffic has no appreciation for geographic lines, and the vast majority of people, and even a lot of voters, don’t even know that they don’t live in Atlanta or Cobb County. They think that it’s all Atlanta,” Bottoms said. “What that means is that it’s all of our responsibility to work in a cohesive way to make sure that we are able to navigate this traffic issue that we have in the metro area and even statewide.”

Atlanta’s 60th mayor told the MDJ that discussions continue on the year-old Atlanta Transit-Link Authority — a 10-member board representing 13 counties from Cherokee to Coweta — and the fact that those conversations are even happening “speaks to how far we’ve come on transportation.” She encouraged metro counties to continue thinking regionally instead of just for their county.

When asked if CobbLinc was enough in Cobb County or if the county should look for ways to expand MARTA deeper into its borders, Bottoms said her preference “of course” would be the expansion of MARTA.

“But I’m going to defer to the leaders of Cobb County in terms of what they think is best for Cobb County and the folks who live and work in Cobb County,” she said. “But again, with the ATL transit board, we’re all talking and planning comprehensively, and that’s enormous progress. That’s a 180 from where we’ve been in the past.”

Bottoms: Cobb’s police pay problem is no longer in Atlanta

Since the raises, resignations are down 42% and applications are up 76%, Bottoms said.

“What we saw in Atlanta was we were having a tremendous bleed in our police force, because we were lagging behind in pay,” Bottoms said. “I’m now very happy to say that Cobb County has a problem that we used to have.”

The mayor said it made her nervous to now be leading with police pay in the region, because as Cobb “catches up,” Atlanta will have to continue moving up as well.

Those actions came after pressure from the public safety community, the MDJ previously reported.

Like transportation, Bottoms said public safety is a regional issue.

“Our criminals don’t understand or care about geographic lines,” she said. “I recognize that this is something that, really, we should all be concerned about.”

Recruitment and retention, she added, is an issue for police departments across the nation.

Using the example of Atlanta police officers’ struggle to live within the city of Atlanta, Bottoms transitioned to growing attention for the need for affordable housing.

She said her city has appointed a chief housing officer, Terri Lee, to lead conversations going forward with other city leaders, including the Atlanta Housing Authority and the city planning department, conversations that she said were not previously happening.

“As we face this challenge of affordable housing in Atlanta, I do know that there will be a ripple effect in our surrounding counties as well,” she said.

Bottoms said the affordable housing issue has garnered the attention of leaders across the state, a fact that she said surprised her.

“I could not imagine that a representative from rural Georgia ... would care about affordable housing within the city of Atlanta,” she said.

What she found instead, she said, was widespread care and concern because of the hub that Atlanta and the metro area represent for the state. As Atlanta continues to attract potential employees and businesses to the region, Bottoms said, those workers should not have to commute two hours one way because of a lack of affordable housing.

It’s great to see Atlanta pays more than Cobb County. I never thought I would see the county public safety getting lower and lower behind other cities like Alpharetta, sandy springs, Milton and even hapeviille . We have had studies on all of this and former public safety director Jack Forsyth told the Cobb BOC but oh no . Now we are seeing a complete moral failure and a loss of great people. Thx ms bottoms for pointing this out to our BOC.

It's truly distressing to hear "experts" and politicians extol the virtues of transit (meaning Trains and Buses! Guess they are still living in the 19th century. Why can't they wake up and learn about 21st century transportation. I am referring to Autonomous Electric Vehicles (AEV's). With just a little study it will become apparent to anyone with an IQ over 100, that they will fix ALL of our ground transportation problems, I am getting tired of extolling the virtues of AEV's to closed minds. Why can't everyone see that AEV's will reduce the number of vehicles on the road by 80-90% and a similar reduction in number of vehicle miles traveled! AEV's require NO PARKING so parking problems will disappear. There will be no problem parking at Marietta Square!!

All comments, pro and con are welcome!

What a joke. Atlanta and MARTA and Fulton County and other local cities and counties are stuck with an increasingly expensive and inefficient mass transportation system and wan't the rest of us to pay for this. Stand tall Cobb County and resist this goat rodeo.