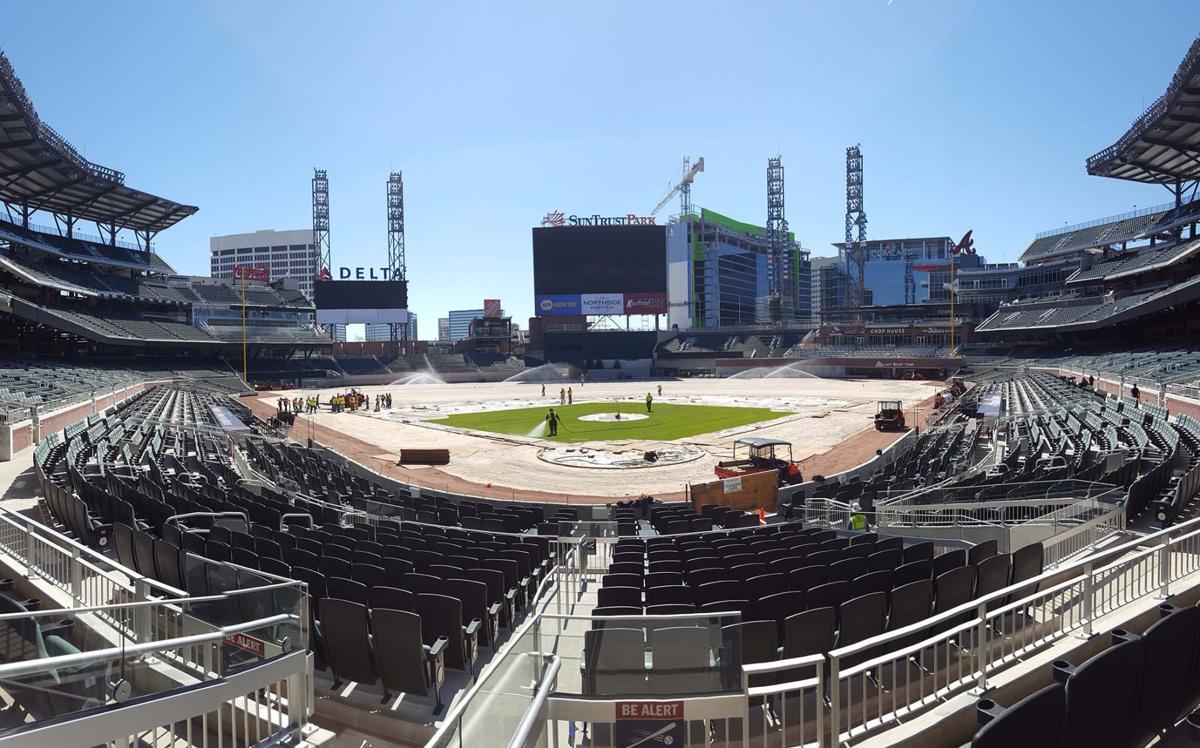 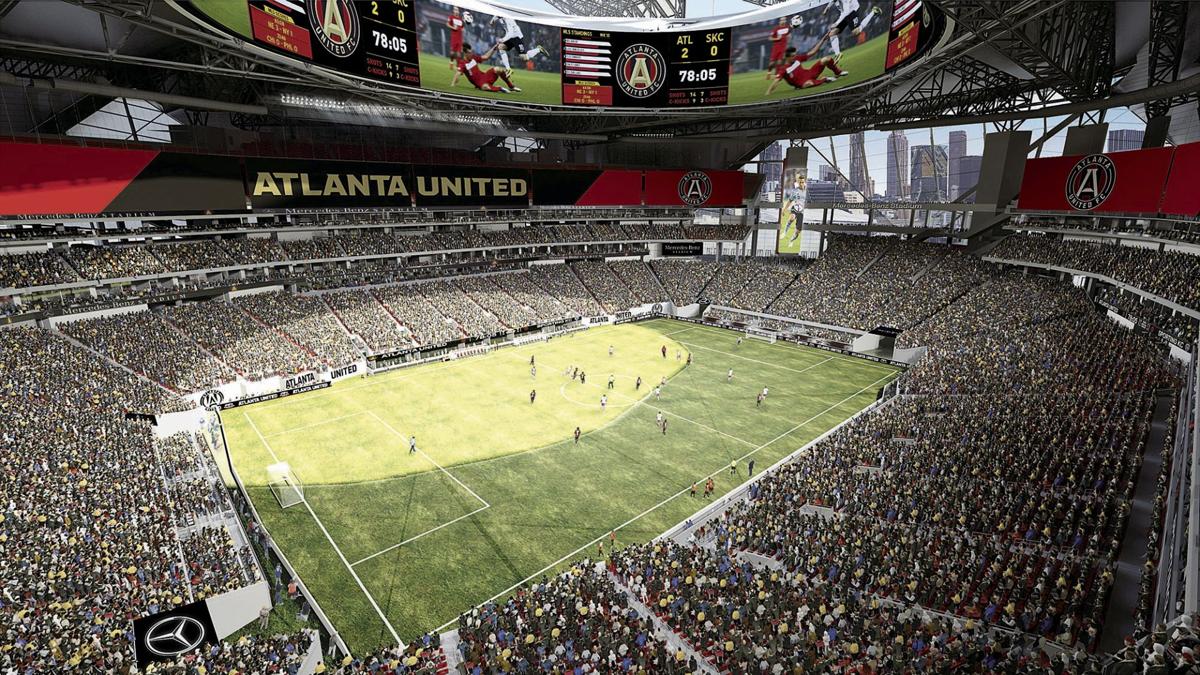 A rendering of the Mercedes-Benz Stadium in downtown Atlanta. 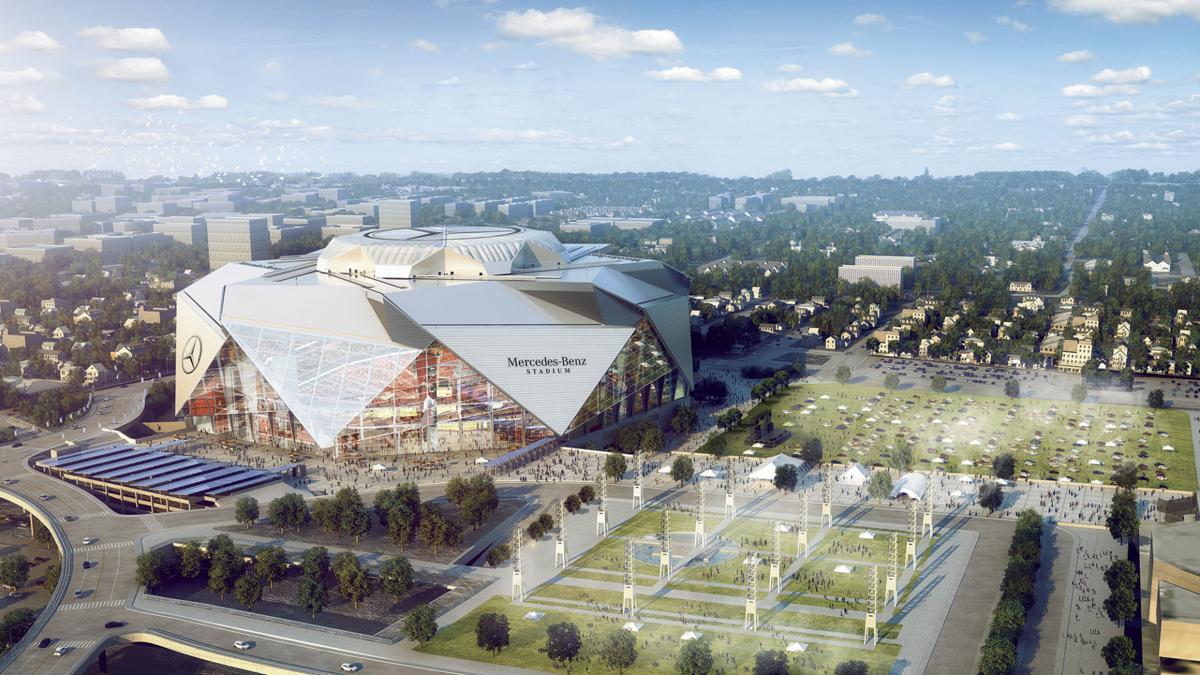 An aerial rendering of the Mercedes-Benz stadium. 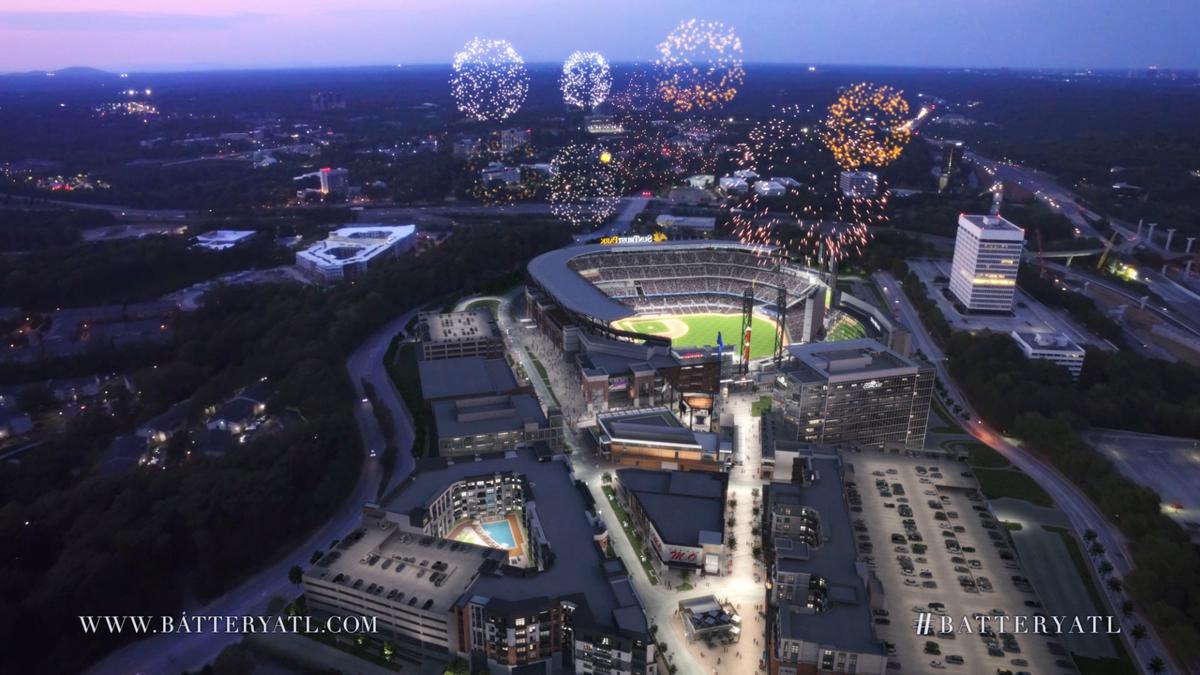 A rendering of SunTrust Park and the surrounding live-work-play area called, ‘The Battery.’

A rendering of the Mercedes-Benz Stadium in downtown Atlanta.

An aerial rendering of the Mercedes-Benz stadium.

A rendering of SunTrust Park and the surrounding live-work-play area called, ‘The Battery.’

The past few years has seen a flurry of construction in Atlanta’s stadium scene.

While SunTrust Park, the new home of the Atlanta Braves, has received most of the attention in Cobb, work has also been busy in downtown Atlanta as well at the Mercedes Benz stadium.

While the two projects are focused on different sports and markets, they carry one issue in tandem: Technology. And lots of it inside as well as outside the stadium.

For example, SunTrust Park’s first official game opens on April 14, guests can use Waze to navigate the traffic, can summon Uber for a ride, check out the team’s websites — www.bravesupdate.com or www.bravesupdate.com/access — for parking and that is before you enter the park.

Before that first pitch, we want to take a closer look at the differences in the projects.

To buy a ticket to the Braves’ games, spectators who decide to go on the spur of the moment can simply walk up to a sales window. Single game ticket prices have been released, and Braves officials have said that tickets prices vary widely. Prices for season ticket holders cost $28 per game. More than 19,000 seats, nearly half of the ballpark, will be priced under $20 per seat, with more than 7,000 at less than $10, said Braves spokeswoman Beth Marshall.

As for the Falcons, fans who don’t purchase what’s called seat licenses will have to take their chances with Stub Hub or scalpers. You can’t buy a ticket at the stadium from anyone working for the Falcons, said Alison Blue, spokeswoman for Amb Group, the holding company for all of Arthur Blank’s family businesses, including the Falcons.

Seat licenses involve a one-time fee that provides people with the rights to purchase season tickets for the Falcons’ games and gives fans the added benefit of owning a seat for all games.

“This is a common practice for new NFL stadiums,” she said. “Mercedes-Benz Stadium seat licenses start at $500 per seat and can be paid up front or over 10 years. Our ticket prices for NFL games are locked for the first three seasons and are comparable to the average ticket prices across the league.”

“Theoretically, every game will be sold out because we will be selling every seat in the stadium for Falcons games ahead of time,” he said. “Now, not every season ticket holder can go to every game, so they will go on NFL exchange or a secondary market to sell their ticket … No, you can’t just go up to the ticket window and buy a ticket as you have been able to in the past.”

Ninety-five percent of seats at Falcons games will be 21 inches wide, compared with 19 inches at the Georgia Dome.

The Braves could not provide measurements on their seats, only stating that there will be a variety of options.

At Falcons’ games, hot dogs will sell for $2 each, 12-ounce domestic beers for $5 and sodas with unlimited refills for $2.

The Braves haven’t determined prices yet for food and drink, team officials said.

SunTrust Park will have a jumbotron, called BravesVision, that will be 64 feet tall and 121 feet wide. Mercedes-Benz Stadium will feature a “first-of-its-kind” Halo Board, a 360 degree HD videoboard that hangs from the roof opening. Blue said it is 61,9000 feet, the largest LED video display in sports. The stadium also features a 100-foot tall “mega column that is wrapped in LED on three sides.”

Mercedes-Benz Stadium will have an eight-petal retractable roof that opens and closes like the aperture of a camera lens and constructed of a fabric allowing translucent light come into the stadium when closed. There’ll be a floor-to-ceiling Window to the City offering both interior and exterior views of the downtown landscape and skyline.

Mercedes-Benz Stadium also will have a 100,000-square-foot open gathering space that “provides fans the opportunity to blend the indoor-outdoor in-stadium experience and features live pre- and post-event entertainment, Blue said.

The Braves considered a retractable roof but rejected the notion due to cost and baseball tradition. But the park was designed so up to 60 percent of the fans will be covered.

The steel framework for a 108,000-square-foot canopy hangs above the upper deck, protruding as much as 60 feet over rows of seats.

The canopy will be 80 feet wide at its widest point, with 20 feet of that covering the upper-level concourse and the remainder extending over rows of seats.

Braves officials estimate the canopy and the cantilevered seating sections throughout the stadium will combine to shade as many as 60 percent of the fans.

Mercedes-Benz Stadium broke ground in May 2014 and will be completed this July, Blue said.

SunTrust claims this is the fastest a Major League Baseball park has been designed and constructed. Design took eight months and construction took 29 for a total of 37 months.

Blue said the city of Atlanta’s commitment to construction costs for Mercedes-Benz Stadium is $200 million of bond proceeds secured by hotel-motel taxes. As for SunTrust, the Cobb County cost is approximately $300 million and the Braves costs is about $372 million, not including the mixed-use development, The Battery Atlanta, which costs the Braves and private partners $550 million but costs Cobb taxpayers nothing, Marshall said.

At SunTrust, 81 regular season games are scheduled, potential playoff games and a handful of concerts. Additionally, the facility is open for special events like weddings. Residents can also attend one of the many events a year in the plaza outside the ballpark and more than 50 events at the Coca-Cola Roxy Theatre.

Mercedes-Benz Stadium will host about 50 events a year, including 27 regular season home games between the Falcons and the Atlanta United major league soccer team. Also the stadium will host concerts, college football games and international soccer matches, plus corporate and hospitality events.

As far as the Atlanta Falcons are concerned, fans in Cobb or other suburban areas won’t get to the new $1.5 billion Mercedes-Benz Stadium any faster than they did to the soon-to-be-demolished Georgia Dome next door. But the Falcons have also developed plans with Waze and Uber to move people to the stadium faster.

For the driver, Mercedes-Benz Stadium will have 21,000 parking spaces for fans, and the Braves 11,000 which are owned or leased by the organization. For those who can’t get in those spaces, the Braves have unveiled plans to launch a private shuttle service to serve managed lots and also key points of interest in metro Atlanta.

Also, the Braves will offer a shuttle service near the $672 million park and the organization has partnered with Uber, which will have a designated “Uber Zone” next to the stadium.

What’s more, the opening pitch has been pushed back a half-hour to 7:30 to allow traffic to ease a bit.

“The picture is much rosier than just a week or two ago as far as traffic and confusion and getting there,” said Tad Leithead, chairman of the Cumberland Improvement District, in which SunTrust Park is located. “But it’s still ongoing. Not finished. By the end of March, most of it should be ready — the roads, the bridges and walkways. There’s still going to be an initial adjustment period. I think that all that’s been done is going to be an unbelievably positive to the games. But we will experience some growing pains. The Braves have been very detailed and scientific about all this, all aspects.”

Keep an eye out for television and newspaper advertisements in the days ahead.

Leithead added: “You must remember that we are experiencing $2.5 billion in construction benefits. There’ll be plenty of restaurants and lots of entertainment at The Battery Atlanta,” the mixed-use development near the park. “It’s going to be cool.”

Most Braves’ fans, he said, live north of Atlanta, and locating the fan base closer to the stadium shortens the commute for the vast majority of people.

The team’s first regular season game is scheduled April 14 at 7:35 against the San Diego Padres.